In this post, I think about what Core Data Services (CDS) is, what it does, and why we should make it a priority to learn more about.

Earlier this morning, while following a tutorial, I came across this message in the console log of my SAP Web IDE:

On the surface, it looks like many of the messages we see in process output – informational, and part of a series of lines that describe what’s going on in the background.

What struck me was the implied significance. What this message tells me is that CDS — a layer that has hitherto been largely understated — has an identity, a version, all of its own. Even the CDS compiler has its own version. Rather than thinking about CDS as an amorphous blob of language that sits implicitly somewhere between the database and UI5 (especially Fiori Elements, with the annotations that CDS offers), CDS is very much something that we should sit up and pay attention to as an explicit part of SAP’s development technology stack.

The origins of CDS

CDS was born in the early HANA era, which heralded paradigm changes in application programming. Instead of bringing data to code, as we did in the classic R/3 + RDBMS approach, the power of HANA suggested that the approach should be to bring code to data.

Some of us older hackers might suggest that this is nothing new, talking wistfully about stored procedures, and how everything old eventually becomes new again. But we’ll leave that for another time.

One thing that SAP has done consistently well over the decades is to understand the importance of abstraction. With the advent of HANA and the switch to a data centric approach to development, an abstraction layer providing language for data definition, access and queries was born.

Initially this layer, named Core Data Services, was used to bridge the semantic gap between low level SQL (as a kind of “database assembly language”) and the actual data expressions needed to solve business problems, bringing declarations at conceptual and implementation levels closer together.

From strength to strength

Initially available in the HANA space, CDS was then made available to the ABAP world, and with the advent of Fiori Elements, many of us became conscious of CDS as more than just a database abstraction layer.

The power of CDS annotations and the possibilities of layering consumption views upon interface views, with the added facility of adding metadata for use in generated user interface (UI) scenarios is a heady combination. Add to that the possibilities that metadata extensions allow and CDS becomes one powerful layer indeed.

I’m seeing CDS as a key ingredient that pervades much of what we as developers in the SAP ecosphere do now and will be doing tomorrow too. It’s the glue, the backbone, that binds together multiple layers and moving parts.

In the past, we’ve talked about “full stack developers”, meaning (in our world) folks who can build end-to-end Fiori apps with frontend components powered by UI5 and backend components powered by OData on the ABAP stack. Perhaps we need to broaden that view and think about the reality which might be better described as “multi stack”. As we’ve now established that ABAP as a backend platform and UI5 as a frontend platform works well, we can and should consider alternatives at both ends.

The idea of “bring your own language” (BYOL) on the SAP Cloud Platform actually extends outwards in all directions to “bring your own [database|frontend|backend]” and dilutes the meaning of “full stack developer” because few, if any, developers will be skilled in all the possible combinations.

That said, CDS is a front runner for being a constant in this multi stack world and something we should all know about. I’ve mentioned already that CDS binds multiple layers and moving parts together. Perhaps more significantly it binds people together, being a language that’s used and understood by technicians up and down the stack(s) and that has meaning and significance to all of them.

In last week’s Monday morning thoughts, on the learning continuum, I mentioned the new Application Programming Model for the SAP Cloud Platform, which appeared to me in the form of a wonderful early “Getting Started” tutorial that hints of a tantalising richness and depth that only multiple repeated journeys will start to extract.

The tutorial is about building a full stack application on the SAP Cloud Platform (significantly as a Cloud Foundry app) using a variety of technology components: Fiori Elements and UI5 on the frontend, HANA as the persistency layer, and Java as the application service layer.

A key point is that these are just examples of technology components. For example, the application service layer is, in this tutorial instance, Java, mainly because it’s the runtime supported right now. But perhaps for the next incarnation of the Application Programming Model, there’ll be support a NodeJS stack for an alternative application service layer. It’s early days and I for one am glad that rough consensus and running code has meant that we’re seeing a first glimpse of the entire model with a single runtime example, earlier than we might have done if multiple runtimes had been supported from day one.

Most significantly, however, there’s a notion that becomes clear as soon as you’ve run through the tutorial even just once. That notion is the extreme importance of CDS. CDS is used as a business level data definition source, and to generate the artifacts at the (HANA) persistence layer. It’s used to define visual aspects relating to the data, with those definitions (annotations) making their way to the frontend to influence what the app looks like and how it behaves. Last but not least, it’s used to generate the application service layer. There’s even a top-level item in the project contextual menu for builds based on CDS. 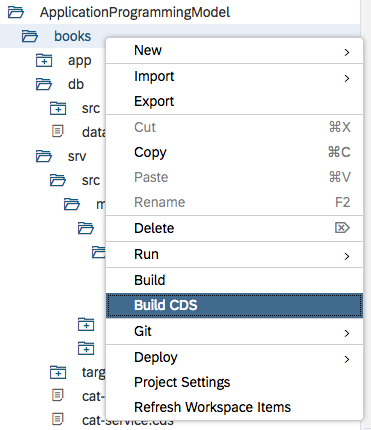 CDS has become a powerful set of languages: Data Definition Language (DDL), Query Language (QL) and Data Control Language (DCL). The annotations are many and complex (my CDS journey has introduced me to some, but there are others that I’ve yet to come across and understand). But in my view it’s a technology, a layer, that we’d be foolish to ignore. Last month I even went so far as to suggest that CDS is one of today’s milestones.

If you do only one thing this week to advance along your learning continuum, may I suggest it’s to look into CDS. Start by looking into the Getting Started Tutorial for the Application Programming Model. If you’re only fleetingly familiar with CDS, let the tutorial wash over you, there will be parts that either don’t make sense, or seem like magic. That doesn’t matter at this stage. Just get to the stage where you’ve experienced CDS first hand, felt it under your fingertips, and grokked where and how it fits in as a lingua franca across the different territories of a single, multi stack application. Then you can branch out and sideways to other CDS tutorials on database facilities, annotations and metadata extensions.

You won’t regret it.

This post was brought to you from a damp but warm early morning in Manchester, Pact Coffee’s Nyarusiza Peaberry coffee and the lingering tiredness of transatlantic jet-lag.

CDS is becoming increasingly relevant for people like myself in the Data Warehousing community. HANA SQL Data Warehouse uses the CDS framework and I found it quite difficult to get my head around the concepts and understand the meaning of it all. This blog helps to get a better understanding.

I think the developers community is the new best friend of the Data Warehouse community as it seems you are way ahead of us in understanding how to use CDS to its full potential.

Hey Jan, thanks for the comment. I do think many of us are only scratching the surface of CDS, and I suspect we'll be seeing it crop up in many more situations (like data warehousing, in fact).

Nice to think that the data warehousing community is coming closer together with the developer community - especially over such a juicy topic as this! 🙂