How to implement Function Import in HANA XS

This is my first blog post and it is all about a feature that I found missing in HANA XSODATA — support for OData Function Imports.  While this feature can be implemented in a custom way through XSJS, I would like to have this custom implementation compliant with OData V2 specification in order for the consumer application (which is SAPUI5) to be able to leverage the existing ODataModel V2 library.  This is my journey for achieving this requirement — by creating a custom function import utility through XSJS.

When implementing an XSJS service, by default, it would need to be called by using an AJAX call.  But when you are using SAPUI5 framework, as a UI5 developer, you don’t normally have to use AJAX in your UI5 application, you would normally use ODataModel V2 instead.  A lot of service handling capabilities is already provided by the standard ODataModel V2 library, so we want to make use of those capabilities as much as possible when consuming the custom XSJS service.

Refer to this repository in GitHub for the sample implementation of the Function Import Utility.

Basically there are a total of 4 XSJS Library files in this utility:

That’s it!  You’re all set to test the function import implementation!

For this testing, I will just show how to consume the OData Service on a regular chrome browser, just like how a backend developer would normally test his/her OData service.

That is all about it for testing the implementation of a fully qualified OData function import using XSJS service.

By using a framework concept like this, the consumption of the XSJS service to perform a Function Import operation is simplified since we can now use the SAPUI5 class library sap.ui.model.odata.v2.ODataModel, otherwise, the UI5 developers will need to use the conventional AJAX method call.

Notice how a simple framework can help on generating the EDMX file and making the function import response compliant with OData V2 specification.

Probably the next relevant thing to do is to try this out into a real SAPUI5 application using the ODataModel V2.  Let me know if it worked for you too. Cheers!

Nice blog. I have a problem when I make this reference:

I get this error:

This is the structure MTA project 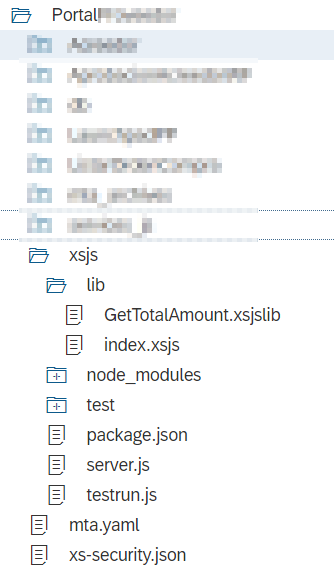 The problem is with your reference:

xsjs here translates into folder. lib folder is the root of your xsjs module. You can solve the issue by either removing the xsjs in the above config, or put your GetTotalAmount.xsjslib inside an xsjs folder.

On another hand, I see that you import Library files. Why? I created an XSJSLIB to generate a correlative with a sequence in HANA but when I execute UPDATE setence I get this error:

Maybe I lost a file import.

It's very hard to determine the issue with the information you provided. Basically importing files is a modularization technique used everywhere in the programming world.

Appreciate if you could share inputs on other HttpRequest calls POST/PUT/DELETE?