I guess to define a field as mandatory should be a very common requirement in the world of CRM Web UI. In short, there are two options:

Let’s try a bit advanced requirement: to enable a dynamic mandatory field, the mandatory or not will depend on the value of another field in the same view. Let’s have a fake requirement, when create an Individual Account, if “Academic Title” has value 0002 (which is Professor in my testing system), we would like to have “First Name” field as mandatory. “First Name” field was not mandatory on the initial creation screen.

If we consider the 2 options above, if we would like to use option 1, which is via configuration, we might have to make changes to the configuration xml in the runtime. In theory, this is possible, but compared to the simple fake requirement we are having, it is not worthy to use such complex solution. Alternatively, we’d like to use option 2, that is via coding in P Getter. We only make different coding in step 5 for the above option 2, as following: 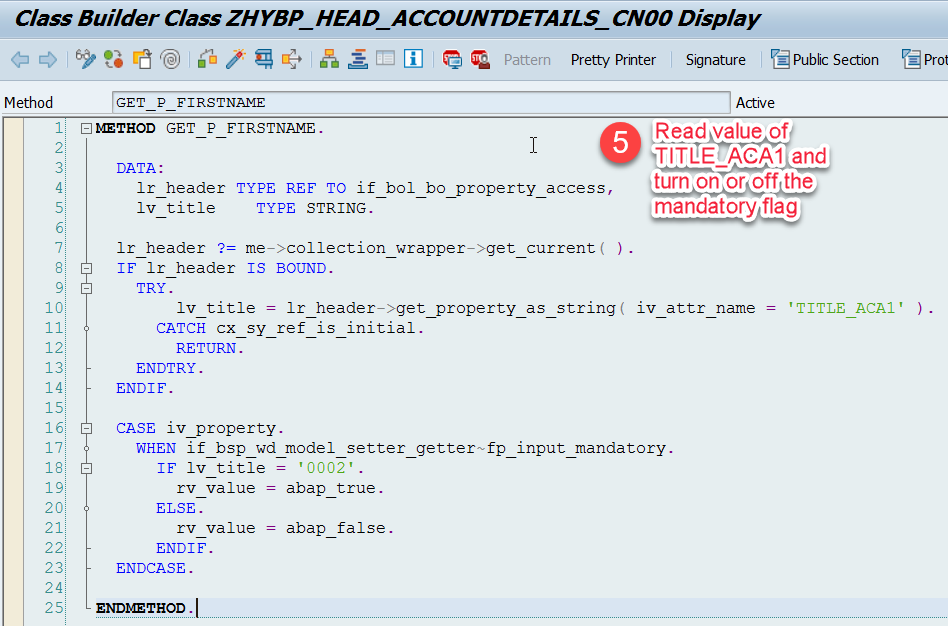 I thought it’s done. But when test the result, it turns out to be with the following confused behavior:

Feeling so sad? Let’s try to analyze how such confusion is caused.

After press “Enter” (a roundtrip), for an empty mandatory field, there will be 3 system behaviors 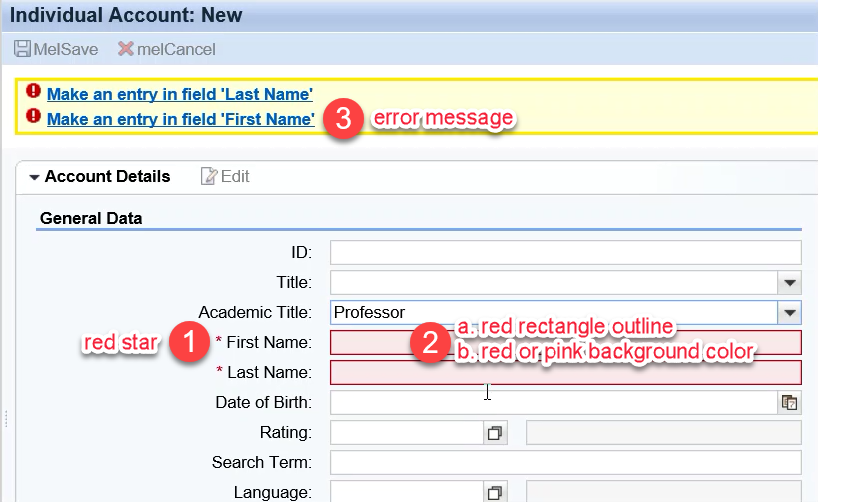 When analyzing the Error status, I happen to find the coding which deals with required field status. The following screen shot shows, in CL_THTMLB_INPUTFIELD, system checks the “required” attribute, and set th-ip-sp-md class id into html. This leads to the system behavior of 2a. Regarding the red star, it is processed in CL_THTMLB_LABEL. The “*” was added into the label and CSS forced it to be red.

Then where is this “required” attribute coming from? It is from the two options mentioned at the beginning of this blog. The coding detail as following

Visualize the flow of one roundtrip as following. The error message will be based on last roundtrip’s mandatory fields of the bsp application. Only after it, the P getter will be called. This leads to the inconsistent system behavior. 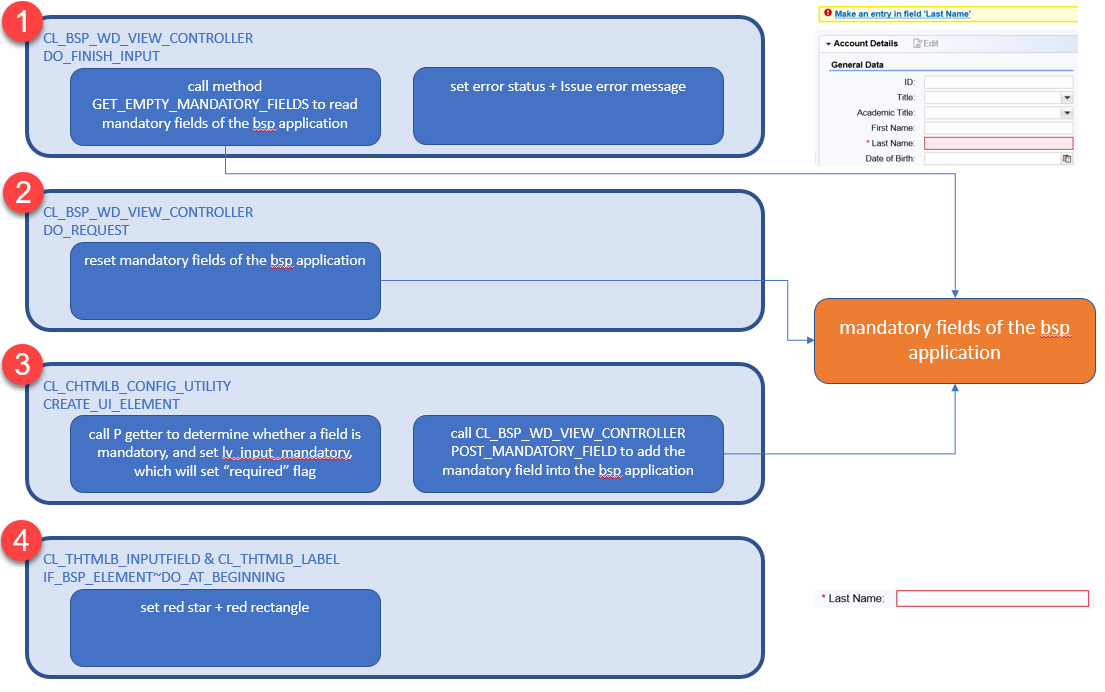 After analyzing, I feel the mechanism is clear to me. But the initial issue was not solved yet. 😛

I’ve discussed with our Web UI developer. Our developer has included this issue within the to do list. But it might take some time to be solved. Before we get a standard solution, let’s try to see if there is any chance to bypass the standard limitation.

There is a blog in 2013, talking about the same Dynamic Mandatory Field requirement. The author proposed a solution in customer bsp component. This blog will try in the scope of an enhanced bsp component.

Then how about redefine DO_FINISH_INPUT method completely? Or redefine method GET_EMPTY_MANDATORY_FIELDS?

With help from my colleague, we managed to come up with the following coding by redefine method GET_EMPTY_MANDATORY_FIELDS. And the initial issue was solved perfectly.

In the following coding, it is better to create a separate interface or method to capsulate the logic regarding judging the dynamic condition, should or should not undergo extra logic. This can lead to easy reading and extension for future. Here the coding to check a field is empty or not is copied from CL_BSP_WD_VIEW_CONTROLLER method GET_EMPTY_MANDATORY_FIELDS.

I’d like to mention that, this issue is already in our developer’s to do list. We should expect a standard solution to this issue in future. Just before the solution is released, you may try the above solution. And I didn’t test in more bsp components. Thus if there is anything I missed, welcome to add to this blog. Thank you!

After more discussion at development team, if you like this function and need it in our standard, please raise suggestion in the upcoming Customer Connection project https://influence.sap.com/CRM2019  (from Oct 23 till Dec 3, 2018 ) and post an improvement suggestion there. Depending on the votes from other customers, development department will review the requests and decide if it can be implemented. Let’s vote it and make it true. 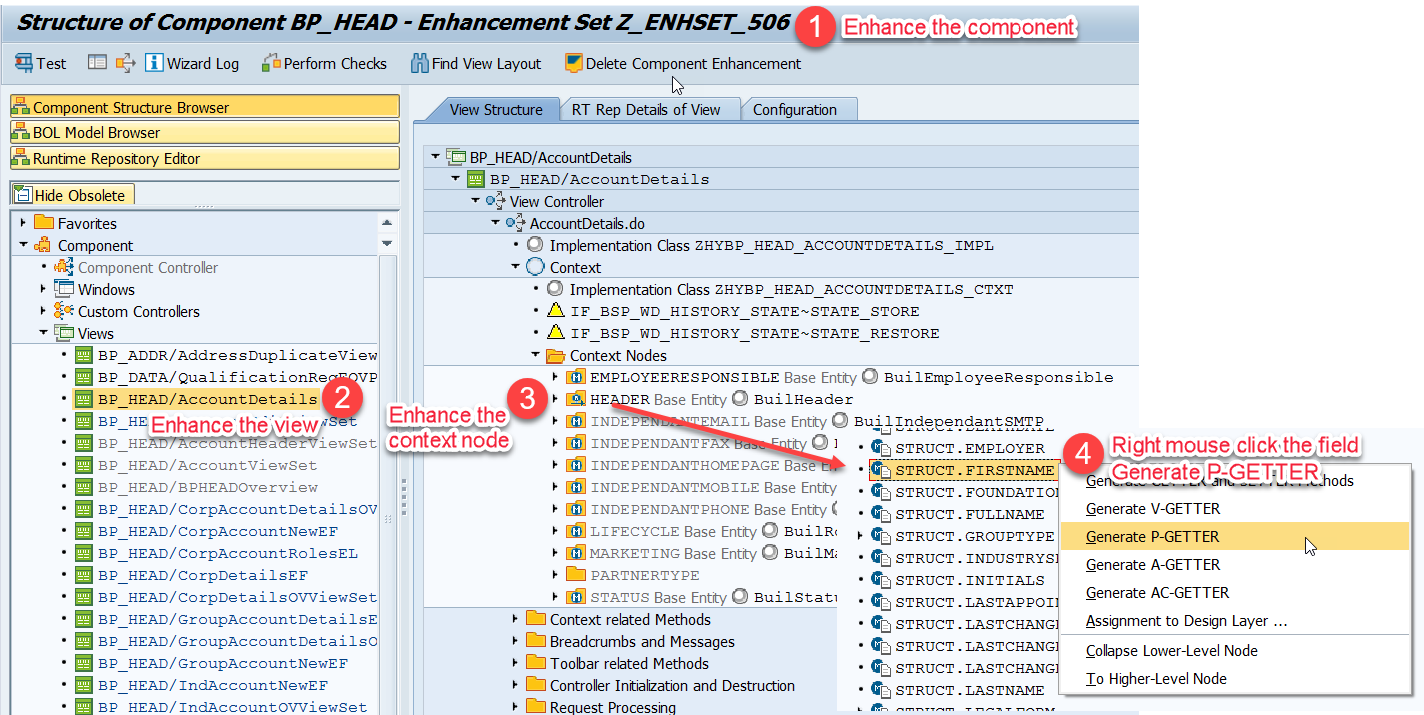 I read in the beginning BBPCRM 715. Though you mentioned SAP Internal system, can we expect CRM 7.0 EhP5 in the near future.

It is still in development phase for the time being. I don't know the exact possible date when it will be released. In case I got the info, I will try to update this post. 🙂