After 1 1/2 years of using the ABAP Test Seam statement, it is time for a blog where I describe the patterns I am using when I use this statement.

You can use Test Seam in classes and functions. It is also possible to use Test Seams in local classes of programs, but that is quite uncommon.

The runtime is increased significantly if methods are called, because ABAP is not developed to enable fast method calls. It contains instead powerfull complex statements whose performance is optimized. The last time I measured the time needed to call a ABAP method I measured 160 ns. This is small but not in all cases neglible. In C this time for instance will often be zero because the compiler inserts the called coding directly.

The main advantages of Test Seams are in my understanding:

The ABAP statements TEST-SEAM and TEST-INJECTION are available since ABAP 7.50 and already explained elsewhere:

The next blog is by Klaus Ziegler, who is in my understaning one of the inventors of the statement: Working effectively with ABAP legacy code – ABAP Test Seams are your friend

This is my first blog on this topic: Test Seams and Test Injections simplify ABAP Unit Tests

I found three rules and one pattern very helpfull when ABAP Test Seams are used. These are:

Example: A Select statement in a Test Seam

Example: A Test Injection for a Select statement 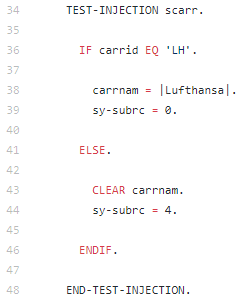 During my first experiments with Test Seams I did not do this. This caused a lot of confusion when I changed the coding and expected the test to fail. But they did not. Assume that in the example above the injected coding would be

The initial Test would pass. But it would also pass if the value of carrid would not be LH.

Rule 2 – Monitor whether all Test Seams have a Test Injection

Add for each Test Seam a Test Injection in the setup method of the unit test. Normally I insert a fail statement here. This makes it easy to recognize if it was forgotten to implement a test injection in a test. If this pattern is not used it can happen that test injections are in a unit test only to prevent that an injection is forgotten. This makes unit tests more difficult to read.

Sometimes it is helpfull to use a variable that is set in the test in the test injection. This has to be done with a trick. The reason is, that the coding in the Test Injection is checked in the context of the tested coding. Instead the following pattern is to be used. I found it in the blog by Klaus Ziegler Working effectively with ABAP legacy code – ABAP Test Seams are your friend and described it in my blog in more detail: Test Seams and Test Injections simplify ABAP Unit Tests

Pattern 1 – Use static attributes of a local class for testing

Static attributes of a local class with the attribut “for testing” can be used in the Unit Test and in the injected code between the TEST-INJECTION statement.

If you use static attributes for a specific tests do not use it for another injection also. If you do, the second time you set it will have the wrong value for the first injection you wanted to use it.

During my first experiments with Test Seams I did not do this. This caused a lot of confusion when I changed the coding and expected the test to fail.

If i understand correctly you place the TEST-INJECTION in the SETUP & don’t have separate injections in the individual test methods.

Generally i write separate unit-tests for the positive & negative cases; i tend to use this pattern.

Isn’t it more transparent with this pattern? The developer sees the “Given” clause in the context of the test-method. Your opinions?

I place a Test Injection in the setup method normally only with the fail statement. And then I place Test Injections in the test methods. I added a few statements for this in the blog because it was not well written, sorry.

But this may differ from test to test, because it is also a challenge to have a clear understandable test coding.

I do not know your pattern with positive and negative case methods. Can you give a more complete example, so that I can understand it better?

Kindly asking your help on my issue..