State of the Community, Perspective All Mine

In years past, I’d do a daily travelogue king of blog, with a recap of the days events from session to session and some fun photos.  This year, at the ASUG Annual Conference/Sapphire, I’ve written on SAP community topics, just not in the “here’s what I did on my summer vacation” kind of prose.  Maybe tomorrow I’ll have a week wrap-up with the highs and lows of the sessions and conference. Today, just about the community in general, though with specifics about the site(s) that I’ve observed recently. 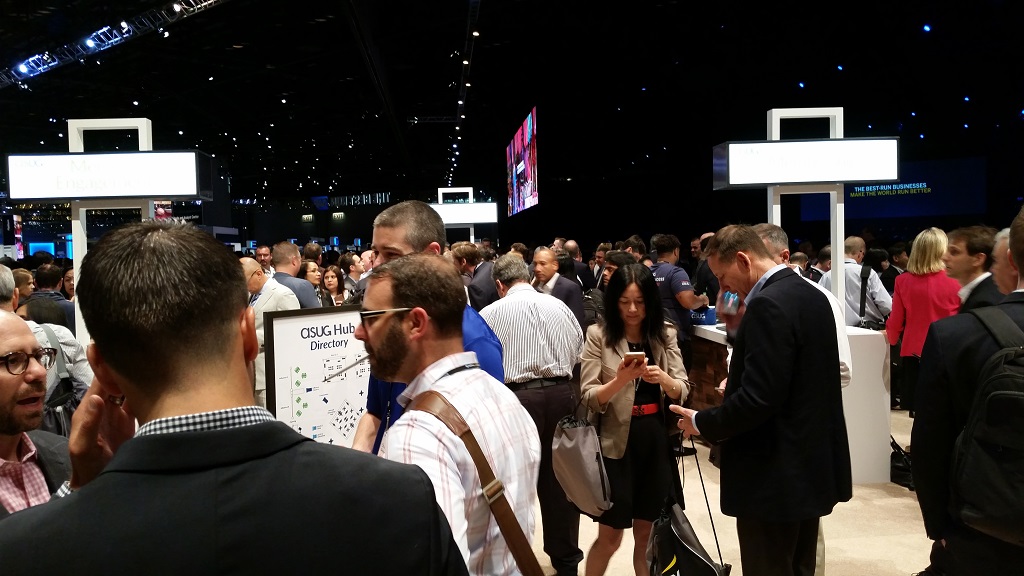 A vendor who usually attends TechEd went to their first Sapphire as an attendee and said they felt “under-dressed” wearing business-style polo shirts.  While that’s still very common, they were struck by the number of “suits”.  And  maybe I’m biased by the campaigns I’ve been involved in, from the “Geeks and Suits” from TechEd (2007?), to the “Hug a Suit”, to be dispassionate about the topic.  I think the conference has become more business/sales, and less education/networking.  Not that it matters, but downward trends in open idea sharing against more one-way messaging makes for a less fulfilling experience.  Perhaps I’m merely nostalgic for the old days. 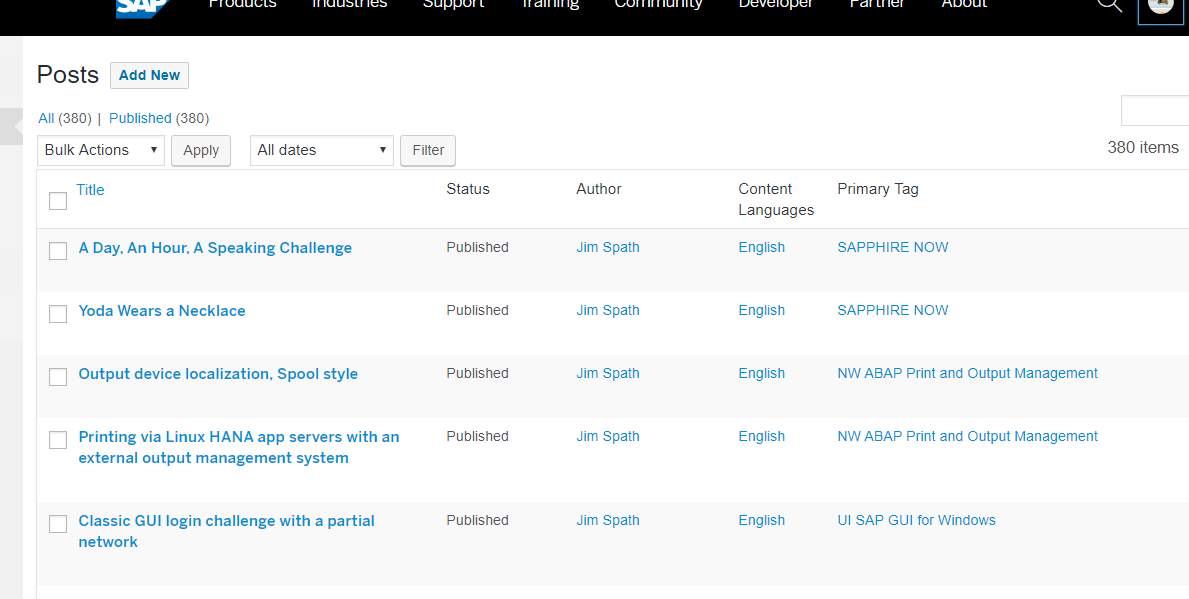 Here’s a user experience note – the top image above shows the blogs I’ve posted, on a Chrome browser on Windows.  The lower image is the same screen on Chrome on an Android tablet.  Pretty sure I just clicked “Actions -> Manage my Blog Posts”. [ https://blogs.sap.com/wp-admin/edit.php?post_type=post&author=currentUser ], and I’m getting different options on the same page.  A bit disconcerting.  Not fatal, just puzzling.

Before I read it, seemed good.  But it’s junk.  Alas, there is no longer an alert moderator on comments button.  Seems an oversight.  You’d have to alert moderator on the blog itself, which is counter-intuitive, particularly if you have used comment alerts in past community site versions.

Would be awesome if the machine learning tools that are being kicked around could work on the spammy posts on the SAP site.  (Sorry Oliver Kohl not throwing you under the bus here…)

The above images show edits on a wiki page.  I looked to see how “former members” were appearing.  They are intermingled with “guests” so it’s hard to tell a person from an unperson.

Below are what I’d call mixed signals.  The conference app fail is an Android problem, not necessarily caused by the design of the app (but more on that in my next post).  The line for cappuccino, or whatever was being brewed, grew and shrank during the afternoon.  I’m not that particular about my caffeine, so the lack of lines at the regular self-service worked for me.  And they were still serving late in the afternoon; I’ve been to conferences where they wheel they coffee away at 3PM.  Makes the last 3 hours tough. as shown in the last image below. 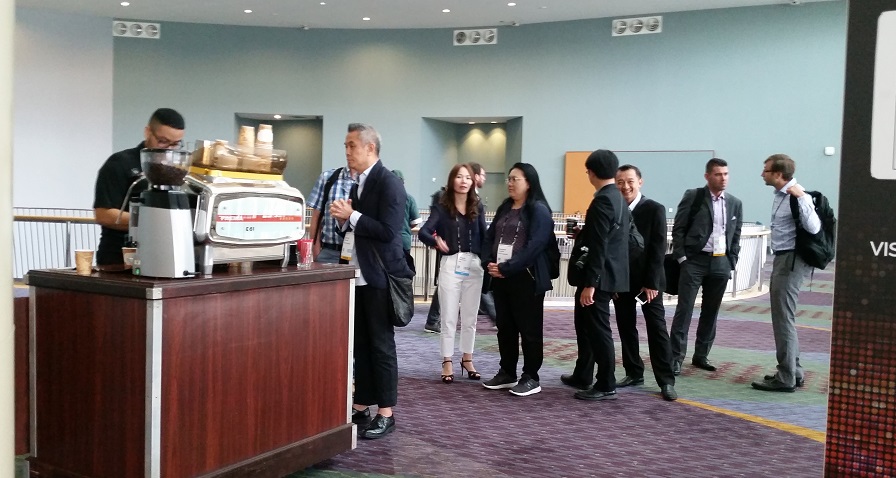 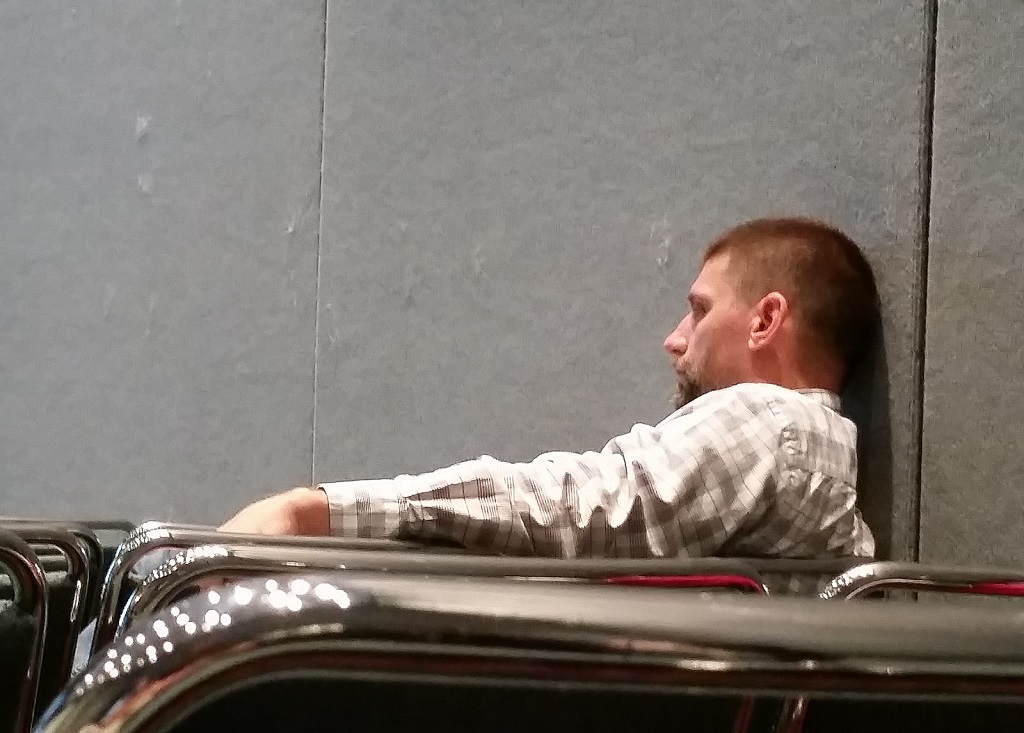 Uhm... Have to say I'm slightly disappointed as I was expecting more of a "thought leadership" level material based on the title. What's your point, Jim?

The items you've pointed out that are missing or inconsistent on SCN website have already been known for a while. Some of the issues are so old that I have to go to Jelena The First profile to find the posts like this one: No Alert Moderator button in the comments Deleted/moderated items referenced in Notifications - I'm not even bothering reporting this. SCN can be painful for anyone with attention to details.

It seems the spam bots have gotten smarter. Previously, they were just posting obvious links like "buy cheap sneakers". These days they masquerade as real comments. "Great blog! Another person also wrote about this here" (link to a random site). One account managed to post multiple comments before I even started suspecting them. Soon we might even have one spam bot writing the blogs on SCN and another commenting. 🙂

Fair points, Jelena.  My point ("and I did have one") was I see degradation in quality, in some site use areas, and whether they've been pointed out before, the improvements aren't visible.  Mainly, I was trying to gauge if the privacy changes will drive down engagement.  It's been written about elsewhere and if I'm being redundant, my bad.

For thought leadership, I must be honest that I don't have anything "intelligent" to contribute here.  Making a site harder to use is easy; making it better is hard.

I find the login to the community easier than it has been.  Not as seamless as twitter/facebook, and that's OK.

The proof of the pudding will be in the numbers - will the content quality improve?  I don't have those numbers, only my personal experience.

It is said that a person can get used to anything after experiencing it for long enough.  Even hanging...