At ASUG/Sapphire/TechEd conferences, I usually write technical views, with some social viewpoints, and hopefully some humor.  This year, something different.

As an ASUG Volunteer, I participate in the speaker selection process for sessions presented by members and partners; I’ve written about our January meetings in the past.  The steps start in the fall, with the call for speakers closing in December or January.  That’s 6 months before the conference, yet we have a short deadline to pick choices and get the gears moving.

We have ideas on specific content we’d like to see presented, and can influence which presentations are proposed.  But if no one submits on a topic, we’re out of luck, unlike the SAP session tracks (I’m thinking TechEd here) where it’s a command performance.  As far as which speakers we want, the bias is toward SAP customers speaking, because we’re a users group.  Peer-to-peer networking is our strong suit.  And if those member companies don’t have diverse tech workforces in SAP management or (like me) individual contributor roles, then we won’t receive proposals from them.

Here’s where I fail.  We should be inclusive, and diverse.  I think about that, more than I say out loud (which is also a form of failure).  The criticisms I’ve read about in other conferences is “too many white males.”  I’m one of those, by accident of birth, and it’s a struggle to get out of the comfort zone and push for inclusion.  Did I review content and purposefully try to discern women and/or other backgrounds proposed topics?  No, I admit, I didn’t.  I just looked at the topics “300 words or fewer” and clicked through.  Did I avoid “foreign names” as probably not having English as a first language, I sure hope not.  That part is always tricky in the selection process.  Writing a good abstract is not the same as presenting well, and having a buzzword-laden paragraph doesn’t mean someone can’t speak coherently on a topic of interest to many.

Will this be noticeable by attendees?  I’m not sure.  I hope I (we) can do better though. Always.

On to deeper topics, if you’ll bear with me, as I digress.

As I have been pondering this post for a while, what pushed me forward was a tweet I read today, from Frank Oz, better known as the voice of Yoda, Miss Piggy, Fozzie Bear, Bert, and countless other characters.

First of all there’s no “boy stuff” or “girl stuff”. It’s all just “stuff”. You can wear whatever stuff that you and your mom want. I mean, Yoda wears a necklace. I’ve never heard anyone make fun of him for wearing “Girl Stuff”. You just be who you are. https://t.co/o5yFtgDG9M

It’s in reply to, well, you can read the thread if you like.  It originated 3 months ago, with this central theme:

… scared her classmates will laugh because she likes ‘boy stuff’.

This blog title reference Frank’s comment, though I believe his surrounding statements are the key to thinking more positively towards role models and stereotypes.

I give props to Moya Watson for being my muse on this topic, in an abbreviated way.  Her advice:  Tell it like you see it, Jim!!!

A few years back, we had workplace diversity training.  I got a perfect score on the test.  My manager at the time said, “Jim, you so diverse.”  He was joking, partly, but I think my alternative thinking and actions stood out, just enough, to be noticed as a positive influence.

Further back in time, my first career job was as an engineer for the federal government.  I became friends with one of my co-workers, who had a distinctive speech pattern that might have been considered a lisp.  He was gay, and I appreciated his trust in revealing his lifestyle to me.  He shared stories of attacks on a bar he patronized, by baseball bat-wielding cretins. While I have not been subject to that level of fear, having long hair sometimes put me near.

Way back, in college, I had a gay roommate (in case you’re wondering, I am not).  He came out to me, as the saying goes, before we roomed together.  He also had long hair, and I’m sure comments were made by those who prejudged by appearance.  I may not have walked in his shoes, but hope I stood up for my friend when it mattered.

Even further back, in my youth, I had a relationship with a woman whom one might call a “women’s libber” if you were sticking labels on people (but don’t).  She schooled me in the sexism inherent in the culture; one comment I recall when I suggested a kitchen implement as a gift to my mother was “no, don’t put another link on her ball-and-chain”, meaning Dad worked, Mom cooked.  My eyes were opened, though I didn’t always follow through with principles of equality.

And as always, I thank Marilyn Pratt  for bringing in many women SAP Mentors. I also thank my ASUG BITI “peeps” whom I regard as sisters (doing it for themselves) – Kristen Dennis, Karin Tillotson , Susan Keohan and my almost Twin Gretchen Lindquist (who seems to be temporarily formerized). (not omitting Tammy Powlas from this – she’s more like a cousin 😉 Lastly, but not leastly, one of the people whom I helped to mentor Kumud Singh (who didn’t really need my help beyond introductions to SAP community leaders). 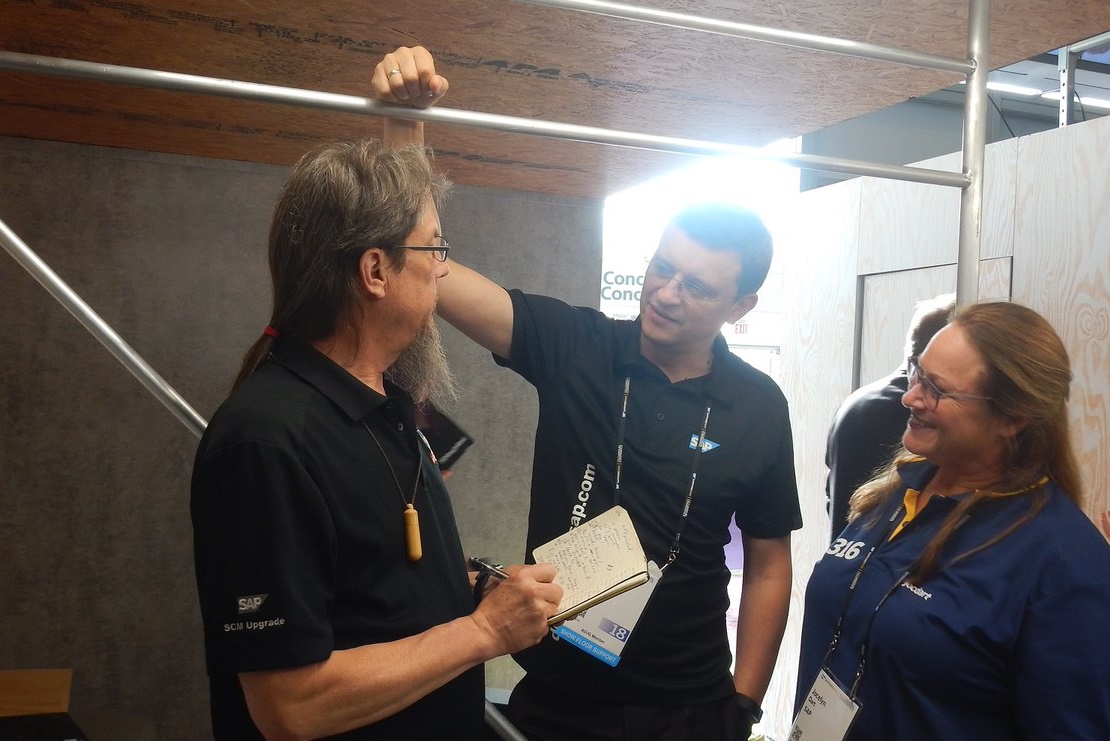 Final thought, from the Scout Vespers, “have I done and have I dared?”

Thank you for the acknowledgement.  Honored to be remembered here, especially in the context of inclusion.

And I can't wait for inclusion in speaker rosters, in the industry, in leadership roles,  to be so ubiquitous as to render blogs about it unnecessary.

But until then, thanks for daring to be an ally.

Nobody who knows you could think that you don't always advocate for inclusion and diversity.   But of course we can (and hopefully will) always try to do better.

Meanwhile, I am so grateful to be one of your BITI 'peeps'.

Please keep me updated on events in Orlando (you know, at the ASUG Annual Conference).

Huge props for this.  I admire your thoughtfulness.  I'm interested in what you wound up with as far as diversity of speakers (and what you're witnessing at SAPPHIRE) but I have a vague idea and don't really want to call that out.  I've been in the same shoes.

>>"Peer-to-peer networking is our strong suit"<<<

There you go.  It was a surprise even to me that when we look amongst our peers, our own network, we're actually not sourcing for diversity. I had always been taught "you recruit from your network - that gets the better candidate" -- but it turns out, it's only the one we might be comfortable with. Not, necessarily, the 'better.' And working with Different People is not always comfortable.

>> will this be noticeable by attendees <<<

not always, right? and sometimes it's simply subconsciously absorbed, that a certain type of person is a subject matter for a given type of subject.  and those who remain repressed continue to be repressed in this way.

but i do hope -- if you do notice - if anyone notices anything -- that people speak out, more and more.  The good, the bad...

Maybe it's like dreams: the more you work on remembering them right when you wake up, the more you remember them.  Thanks for helping to dream!

Moya - much appreciated for not just giving me the participation award ('good blog, good blog').  While I relish such compliments, getting constructive criticism or new/different perspectives is worth its weight in gold.

Not complaining about these 2 points at all, just commenting:

My unscientific metric - the sessions I went to had equal gender representation.  What I also observed is that I tend to see more women presenting in the support and services topics (SuperUsers, for example) than in the "heavy technical" topics like systems management.  Since I attended "both kinds" I saw more equality.  I would not draw major conclusions or trends from my few data points.

Certainly a blog different from your usual writings! The first few paragraphs resonated so well with me especially when you write about writing abstracts Vs giving presentations. I was almost nodding my head while reading. Talking is the first step for execution. Had Marilyn Pratt  not brought "Empathy, Women in IT, Inclusion and diversity related topics" to SAP TechEd Blr, most of us would not have got that aspect in our technology conferences.

I would not have got chance to meet Marilyn without you!

I enjoyed reading the blog. Thanks!

It's very easy to find a lot of rabbit holes when talking / writing about this subject. Just off the top of my head, I'm already thinking of the "girls aren't interested in tech" and "Diversity lowers the bar" myths.

However, I think the key is empathy; understanding that you come from a place of access and control and privilege, and what that means; A good starting point for anyone who grew up white, male, straight is Straight White Male: The Lowest Difficulty Setting There Is.

The TL;DR version of it is that so much of the success that many WMS people consider to be down to their inherent talents (intelligence, social skills, work habits) is actually a direct result of dumb luck - being born in the right place at the right time with the right parents is only the start of it. If you can't access the first rung of learning about something, you will never reach the level of having the knowledge (let alone the permission / confidence) to speak about it.

As usual, someone has (recently) said it better than me; read the whole thing

Thinking about life this way, as a three-legged stool (the good fortune of our birth, the good fortune of our lives, and what we ourselves accomplish through our own efforts) of which we only control one leg, makes clear why tzedakah, why the Jewish concept of philanthropy, is an obligation for those of us whose stools have three good legs.  Knowing that so many such stools have two wobbly legs explains why I’m on the progressive side of the political divide.  If you’re lucky enough to have a 3-legged stool supporting you, give, give, give until it hurts, vote every chance you get, and take good care of the one leg whose well-being you can control.

PS In case anyone thinks I'm patting myself on the back for being aware of these things, just know that I read that Scalzi piece when it first came out in 2012 and I still struggle to maintain that self awareness and empathy. Lots of reason, mainly I'm human with a lot of bad habits. But being difficult doesn't mean I should stop trying !!