Why do Data Warehouse release cycles often exceed several months, and what can you do about it?

The time to market, the time it takes from requirements to end up productionized, is often notoriously long for a DW. In the previous post we talked about developing the HANA SQL DW using a git repository and containers, describing how the Web IDE for HANA enables agile DW development. That was one part of the answer. In this post we treat deployment, or in other words, “making the DW available for productive use”.

This blog series focuses on the agile DW, where the HANA SQL DW is used to develop and deploy iteratively. Therefore, we assume a wide definition of deployment, which ties into developing and testing activities, and includes deployment to testing environments.

The road to production can be unreliable and effort intensive

What are the most common issues in deploying a DW to production, which prevent iterative deployments? Well, I didn’t do any statistical analysis, but these are the main ones I came across:

Now you can guess what the consequence is of the high effort involved in preparing a productive deployment, which might still fail and require the DW team to cancel their plans for the weekend. You don’t want to do this too often! This is one big reason why release cycles often exceed three, four months, and that’s again the reason why the time to market of new requirements is so high. This is where DW teams are between a rock and a hard place: the choice is high frequency and unreliable deploys, or low frequency and somewhat unreliable deploys.

Sit back and enjoy your iterative deployment

So how to make high quality and high-frequency productive deployments happen? This is what you can do:

You will need to invest in setting up the automation tooling for this, and you will need to spend incremental effort in writing tests. But you can run these then as often as you want, without manual intervention, and that’s where the investment pays back. Automation requires a toolset that allows for it. The HANA SQL DW leverages the Web IDE, and this one certainly allows:

So, the HANA SQL DW provides you with integrated tooling to build and automate a DW, assuming you run a 3rd party automation tool. Many companies run these already, and often they already tie in to the Git repository. You might have the need to integrate with 3rd party DW tooling as well. If these tools support the Git repository, and they can be steered by pipeline tooling, this should be fine. If they don’t, you might want to look for other tooling, as having multiple different repositories, each with their own way of working, make automation and life cycle management a lot more complex. 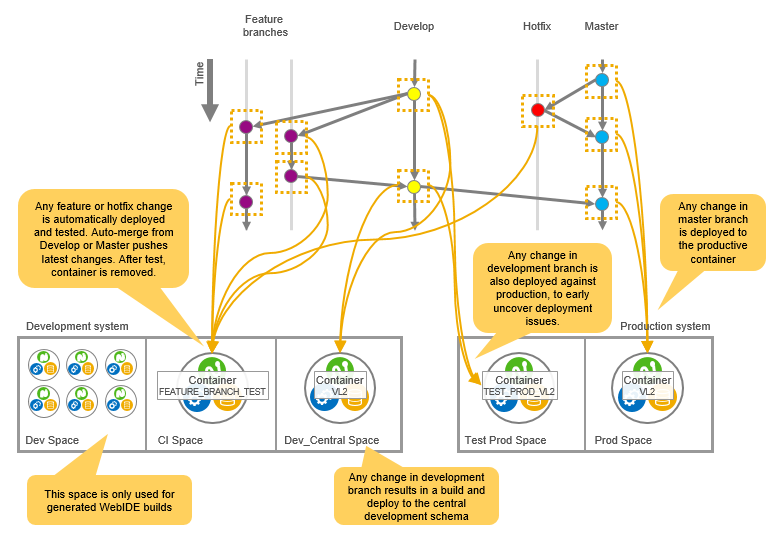 The above illustration shows an example of the deployment steps you can automate using the HANA SQL DW and a 3rd party automation tool. You can see that any change, be it a change by a developer in his own isolated code, or adding a developed feature to a central branch, kicks off a test deployment.

We offer a First Guidance document for Git branching and automation integration that is specific to the HANA SQL DW, integrated with a 3rd party automation toolset. You can easily re-use the config and code for other automation software. This document is based on a best practice blog for automation on the XSA platform. The latter blog is not specific to DW, and there are some code differences, but it offers a good read outside of the DW context, and uses another automation tool as example that you might like.

If you want to run an agile DW and reduce time to market, then you should make sure your DW tooling allows for automation of tests and deployments. With that fulfilled, you can develop and deploy iteratively, because your tools allow you to repeat several steps without manual involvement. The SAP HANA SQL DW allows you to do this. We didn’t touch in detail on the testing topic – that’s maybe for another blog post.