The new version of the SAP S/4HANA Cloud SDK Java libraries is available since today. You can update your dependencies to version 2.0.0 and consume the new version from Maven Central.
In this blog post, we will walk you through the highlights of this major new release. For a complete overview, visit our release notes for the Java libraries. The release notes also include the change log of all our releases so far.
At the end of the article, you will find a set of instructions on how to update to the new version.

Visit us from June 5-7, 2018 at SAPPHIRE NOW 2018 at the topic station Extensibility and Integration with SAP S/4HANA (BA333) or attend the following sessions that feature the SAP S/4HANA Cloud SDK in the context of extending SAP S/4HANA.

With version 2.0.0, we drop the support for Java 7, which in turn allows us to modernize our technology stack. As a consequence and as signaled by the new major version, there are multiple changes to the API of the SAP S/4HANA Cloud SDK which require your attention. Transitioning to 2.0.0 should be quick despite these changes, but you may be required to slightly adopt your code to the changed API or behavior.

These changes fall in different categories: we leverage features and APIs of Java 8 where appropriate, clean up the API of the SAP S/4HANA Cloud SDK, change obsolete or unwanted behavior from past versions, update dependencies, and apply consistent naming. Version 2.0.0 thus not only further improves the quality of the SDK, but also opens up the door to further improvements in the future – some of which you already find with this release, mentioned below.

For a complete overview of what has changed, check the list of compability notes in the full release notes.
We have also published a blog post that guides you through the transition to version 2.0.0.

The Java virtual data model (VDM) for OData services now allows to supply custom headers to all OData requests. Use the new withHttpHeader method that is available on all fluent helpers and specify the String-typed parameters key and value for the HTTP header. The given key and value will be added to the HTTP headers of all underlying OData requests.

You can use the SDK to connect to all OData services listed in the SAP API Business Hub for SAP S/4HANA Cloud.

We have added a resetChangedFields() method to all VDM entities to reset the currently tracked changed fields for update requests. Usually, a field will be marked as changed and sent in following update requests when its setter method has been called. With the new method, you can mark all previously changed fields as unchanged. Subsequent changes with the setters will be registered again.

How to Update the Java Libraries

You can now recompile your project (be aware of the compatibility notes, though) and leverage the new features of the SAP S/4HANA Cloud SDK in version 2.0.0.

Of course, you can also generate a new project that uses version 2.0.0 from the start by running the Maven archetypes for Neo or Cloud Foundry with -DarchetypeVersion=2.0.0 (or RELEASE). 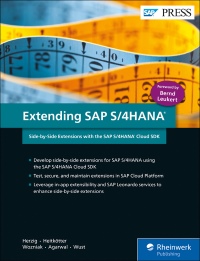