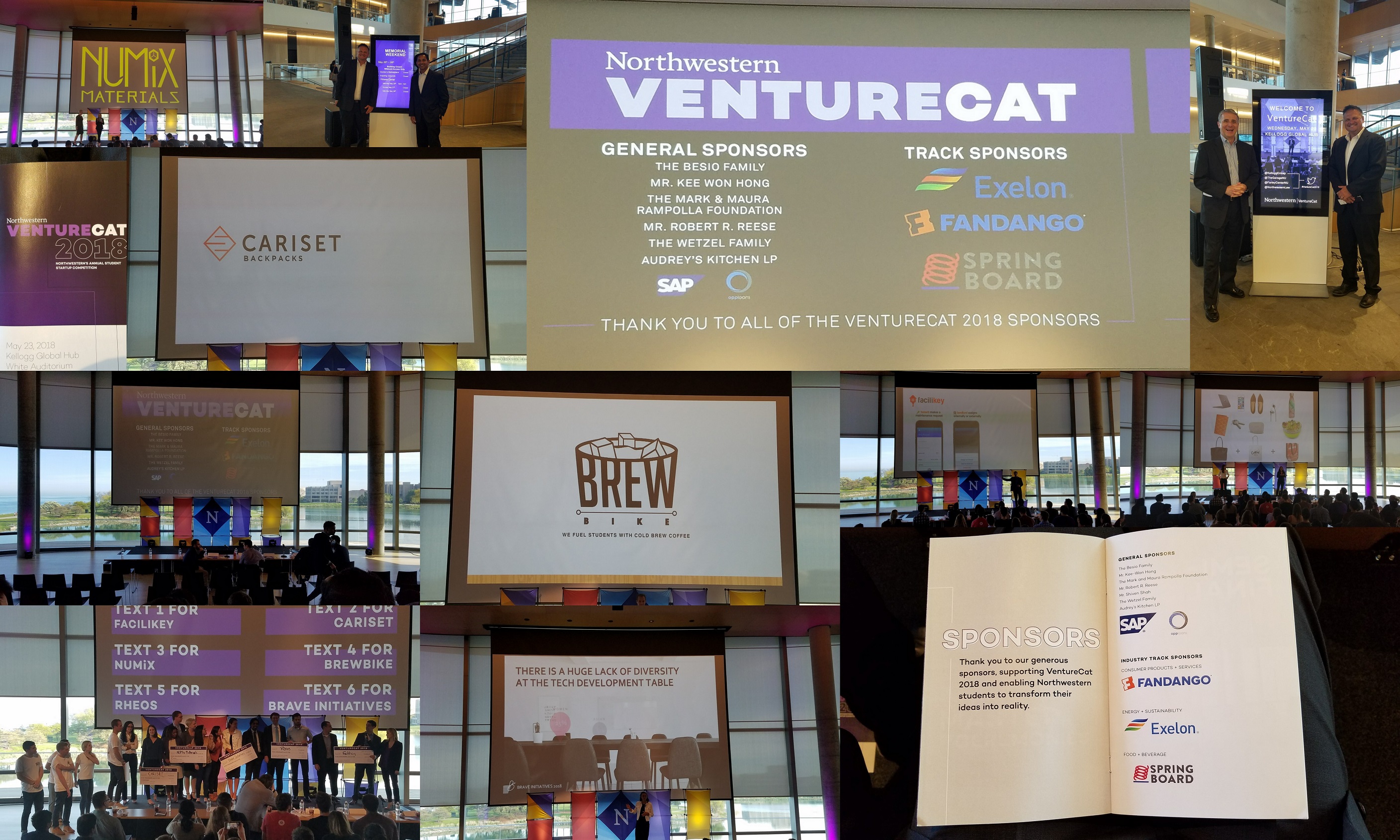 On May 23rd I had the great privilege to represent SAP at the finals of the Northwestern University VentureCat competition. I was joined by Paurav Patel, SVP & GM Midwest Region Services and Joe Zavala, Midwest Region Marketing who graciously agreed to represent SAP with me. Thanks to the generous support of SAP North America, SAP served as one of the financial sponsors of this year’s event. Besides being thanked from the stage, our company was recognized for its support in the printed materials and digital communications for the competition.

VentureCat is an event and showcase celebrating Northwestern’s most promising student-founded startups. The event culminates with a pitch competition in which over $100,000 in prize money is distributed to student ventures. VentureCat is a collaborative event at Northwestern, including efforts through The Farley Center for Entrepreneurship and Innovation, The Kellogg School of Management, the Donald Pritzker Entrepreneurship Law Center and The Garage.

VentureCat is an evolution of the Northwestern University Venture Challenge (NUVC), which was originally introduced in 2007. From inception, NUVC has distinguished itself from other pitch competitions around the globe by organizing competitors in industry-specific tracks, which leverages the rich expertise of distinct schools from across the university in both graduate and undergraduate programs, and awarding top teams with non-dilutive capital.

VentureCat is an experience for Northwestern’s most promising student-founded startups teams to network and pitch their ventures to an esteemed panel of judges and the broader community. Semifinal teams participate in the Four Week Semifinalist Prep Program. The program includes: pitch coaching, advice from industry experts, and professional graphic design support. The semifinalist teams compete in industry tracks. The 1st place winner of each track takes the main stage to compete for the grand prize at the Finals in front of an audience of hundreds of students, alums, and investors.

The six final presentations included themes directly aligned with many of the UN Global Goals for sustainable development including Goal 3 – Good Health and Well Being , Goal 5 – Gender Equality, and Goal 6 – Clean Water and Sanitation.

Also competing in VentureCat 2018 was Cariset Backpacks, a manufacturer of high-end utility backpacks for female young professionals; FaciliKey an AirBnB-like app for landlord-tenant relations; and BraveCamp, a program to help girls develop a passion for coding.