Testing database workload is still a large effort for administrators, testers, developers and consultants alike when looking to upgrading from one release to another. Especially when it comes at larger scale scenarios, the amount of work can grow exponentially.

Initially released with SAP HANA 1.0 SPS12, SAP HANA capture and replay offers semi-automated support for integrated testing in the context of SAP HANA. The goal is to simplify the manual effort needed for creating tests and performing more accurate replays. 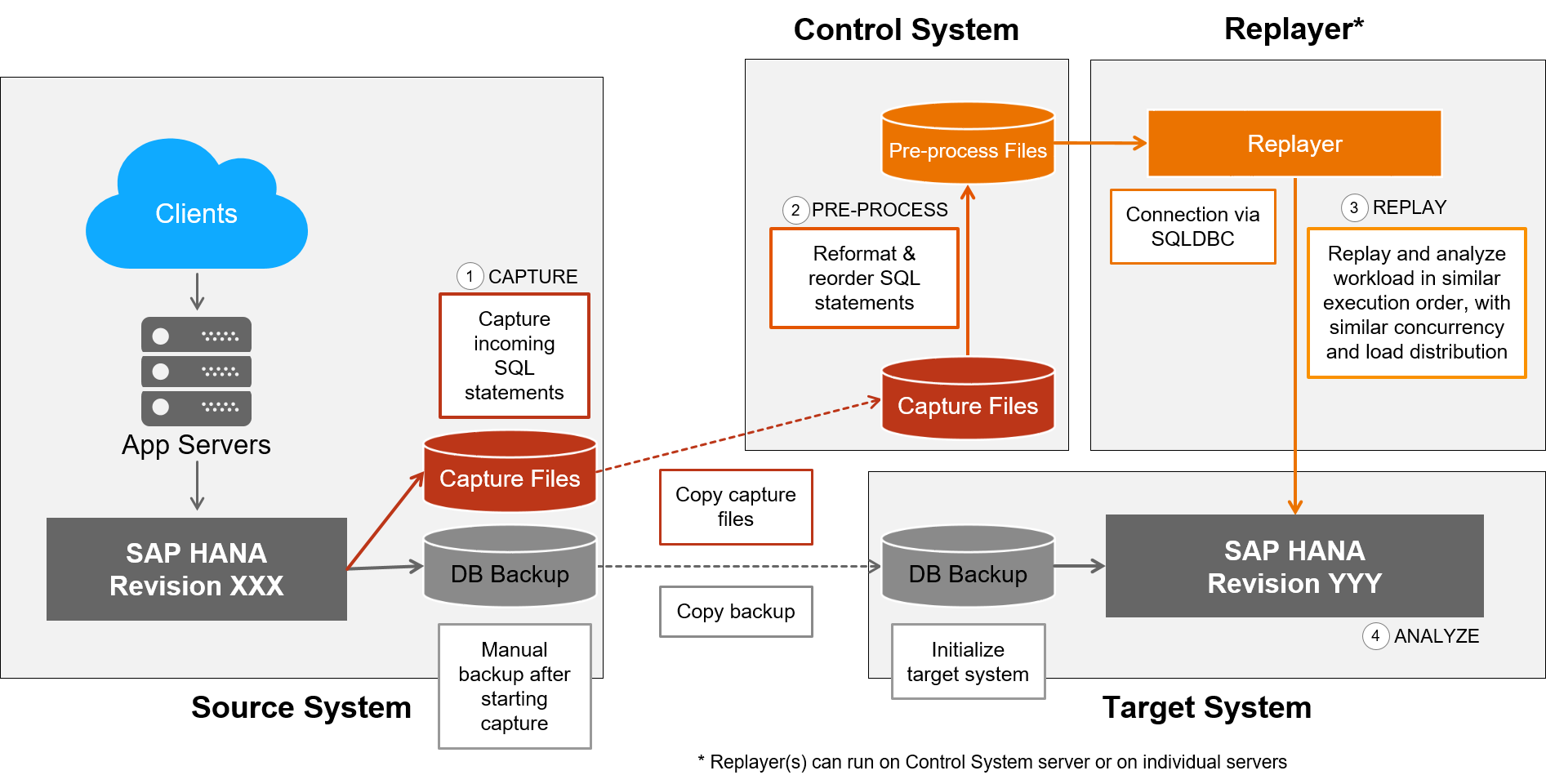 In SAP HANA 2.0 SPS03, SAP HANA capture and replay has received a number of improvements in several areas.

As introduced in my previous blog, many of the enhancements to functionality and stability of SAP HANA capture and replay have been added to the latest revisions of SAP HANA 1.0 SPS12 so customers on the long-term maintenance release can benefit.

The new design of the overview page and several usability enhancements related to the overall navigation of the replay report help users determine problematic statements faster and more efficiently.

New features include the option to automatically trigger a database backup from the capture configuration screen, thus facilitating the backup creation for end users. Also, SQL execution parameters are now being displayed for users to easily re-execute statements with the used parameters. Users can now import and export replay reports from the UI to share them with others or analyze reports not available in their system. A new feature for resetting passwords for database users during replays has been added to make it simpler when dealing with large amounts of users that need to be authenticated when configuring a replay. 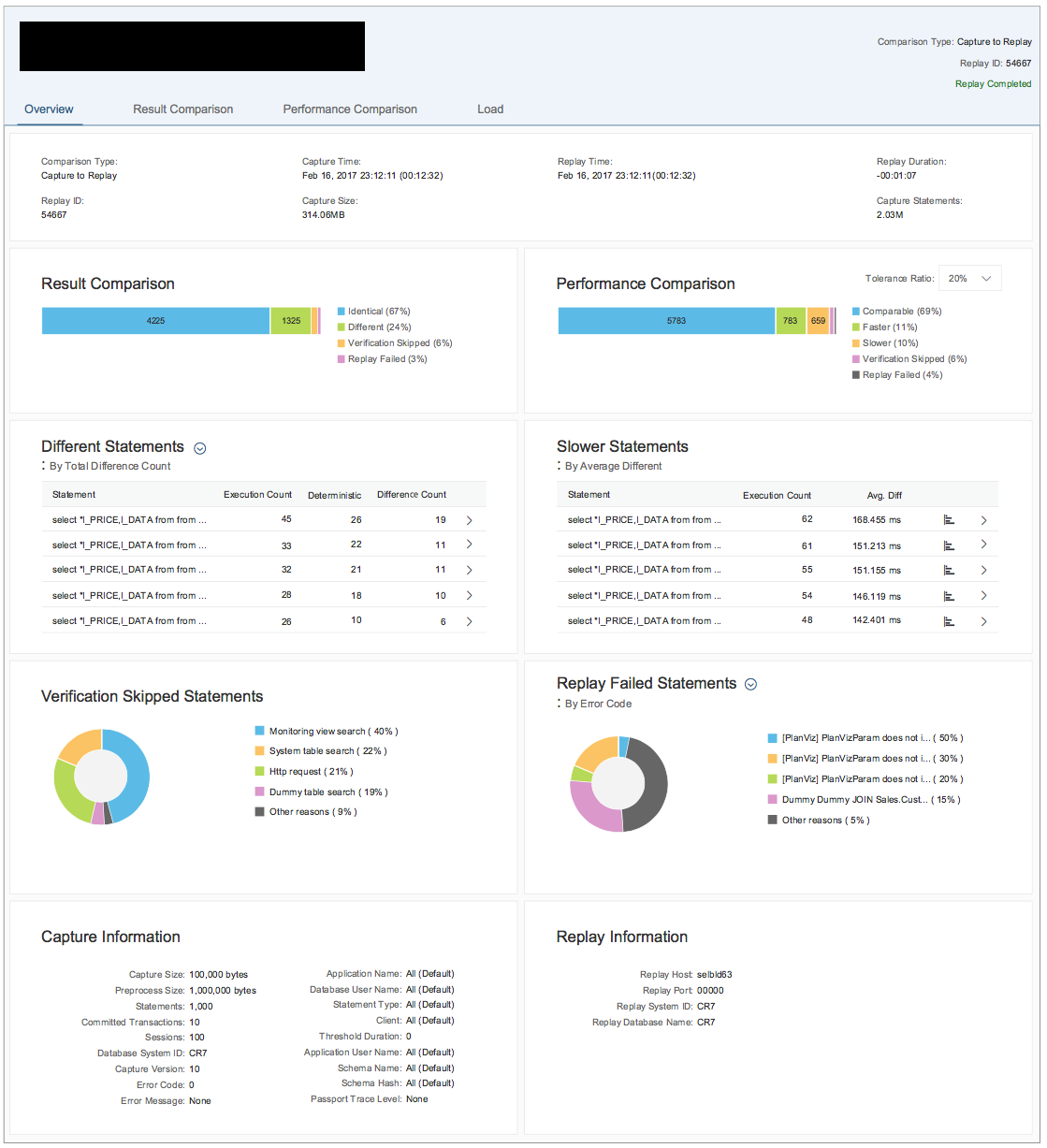 Analyzing performance issues in SAP HANA can be complex and challenging. Multiple analysis steps might be necessary for the user to find the correct monitoring views or develop custom SQL queries to retrieve the needed information from SAP HANA. 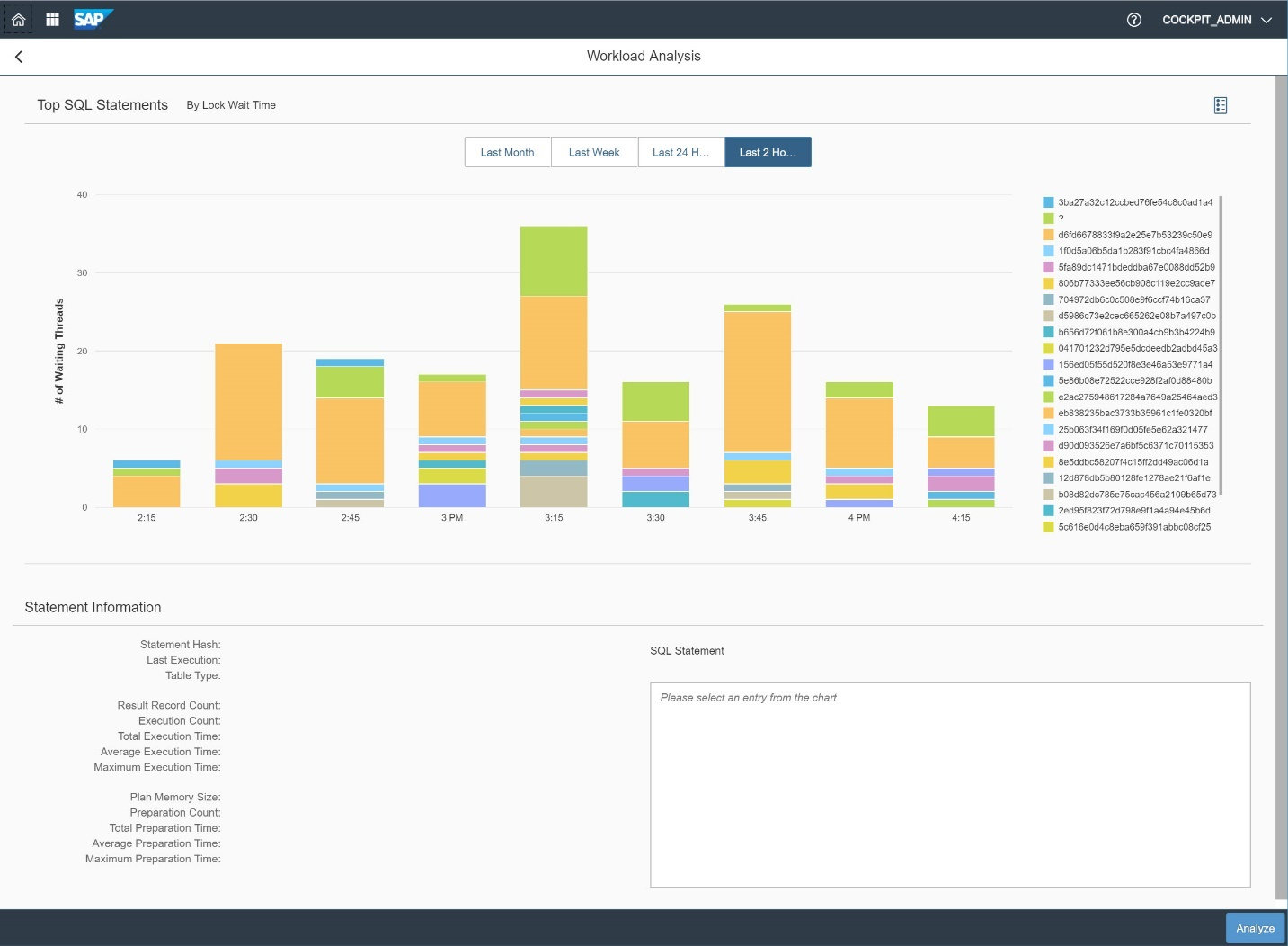 The instrumentation-based workload analyzer focuses on analyzing the engine instrumentation of captured workloads. This tool can be used to load existing capture files to gain a better understanding of the workload that was captured. A new overview page with top SQL statements makes it easier to focus on the analysis of specific statements of interest. Global filters and variants have been added to improve usability when filtering and navigating data. The overall layout of the tool has been re-worked to provide a better, user-friendly tab-based navigation. Improvements to the chart visuals help users better understand the data displayed.

A new overview page now displays the most important information about loaded capture files. Similar to the sampling-based workload analyzer, global filters and variants have been added, and chart visuals have been improved.

Query-level analysis is generally the lowest level of depth in the process of performance analysis, and as such, also the most complex one. It requires deep knowledge into SAP HANA and plenty of experience with queries and data models. When analyzing performance of single SQL statements users can investigate the query execution plan to identify long-running parts of the query.

Since SAP HANA 2.0 SPS00 the SAP HANA SQL analyzer has been available for use. The tool is related to the “PlanViz” perspective in SAP HANA Studio and used for analyzing query-level Performance. A UI to support the newly released Plan Stability feature in SAP HANA has been added. The feature can be used to capture, store and use abstract SQL plans to safeguard query performance for highly optimized queries when upgrading from one SAP HANA SPS to another.

A new landing page helps users navigate through saved plans. Several access points to SAP HANA SQL analyzer have been added in SAP HANA Cockpit, such as the SQL plan cache view or the statement hint view. In addition, the overall layout of SAP HANA SQL analyzer has been enhanced for more usability, more flexiblility and better responsiveness.