SAP router is a standalone program that protects your SAP network against unauthorised access. SAP router is a proxy in a network connection between SAP systems, or between SAP systems and external networks. SAP router acts as an extra firewall to the existing firewall (port filter). It is usually installed directly on the firewall host. The SAP router port serves as a gateway, through which connections to your firewall-protected system can be opened. You can specify the connections you want to allow in a route permission table.

With SAP router you can control and log incoming connections to an SAP system. SAP router can be used to improve network security. Connections and data can be protected by a password from unauthorised external access. With the route permission table you can specify that connections only from selected SAP routers are permitted. With the SNC layer encrypted connections from a known partner can be permitted.

4: What protocols does SAP Router use?

This is the Network Interface (NI) and is used by SAP router, all SAP programs, and development kits for CPI-C and remote function call (RFC). In the OSI 7 layer model, the NI layer forms the upper part of the transport layer. The NI protocol uses TCP or UDP. The protocol is also known as the SAP protocol.

5: What is SAP Protocol?

The SAP Protocol is the protocol used by SAP programs that communicate using the NI interface. This is an enhanced version of the TCP/IP protocol, which has been extended by one field and some options for error information. 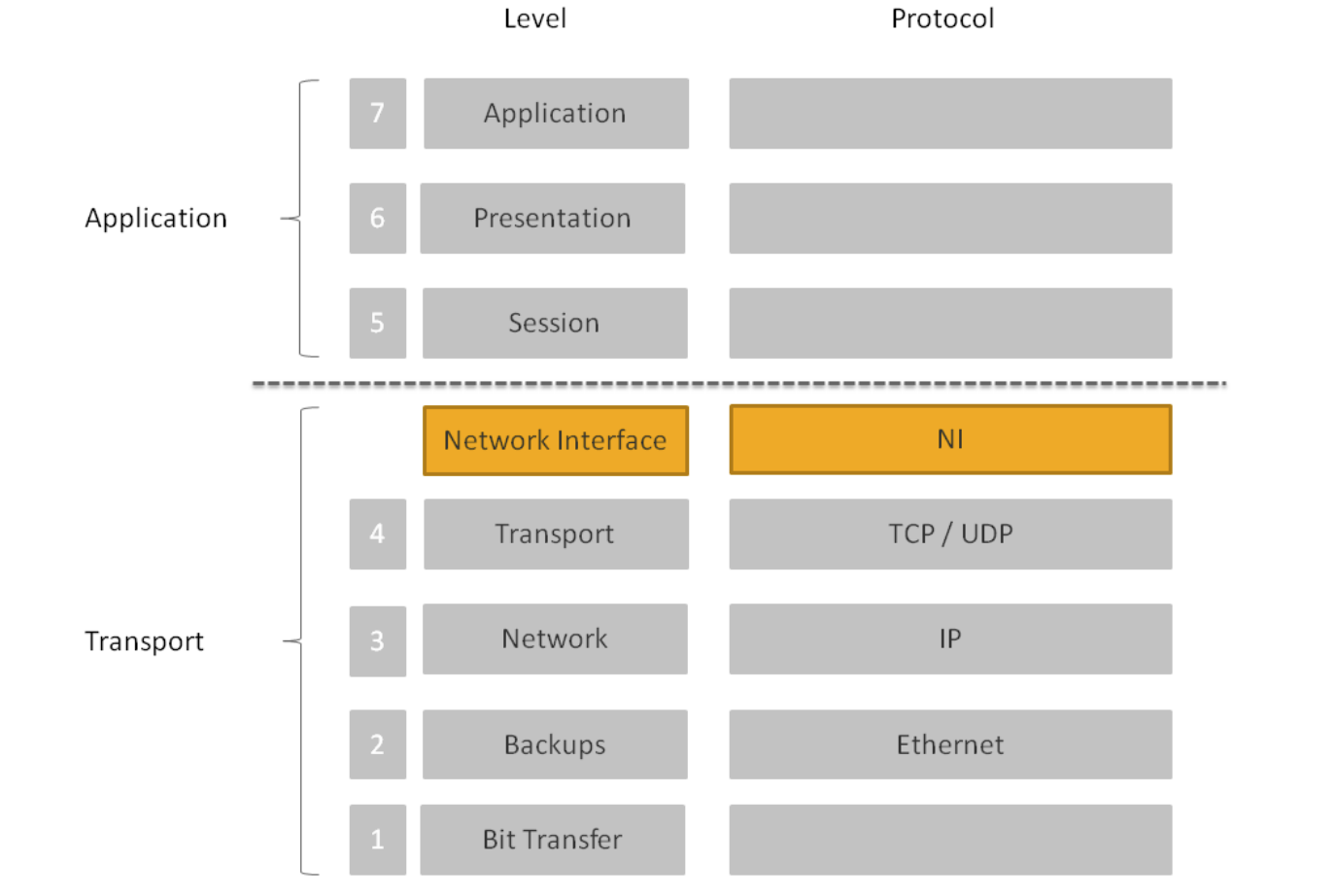 There are two different options here: 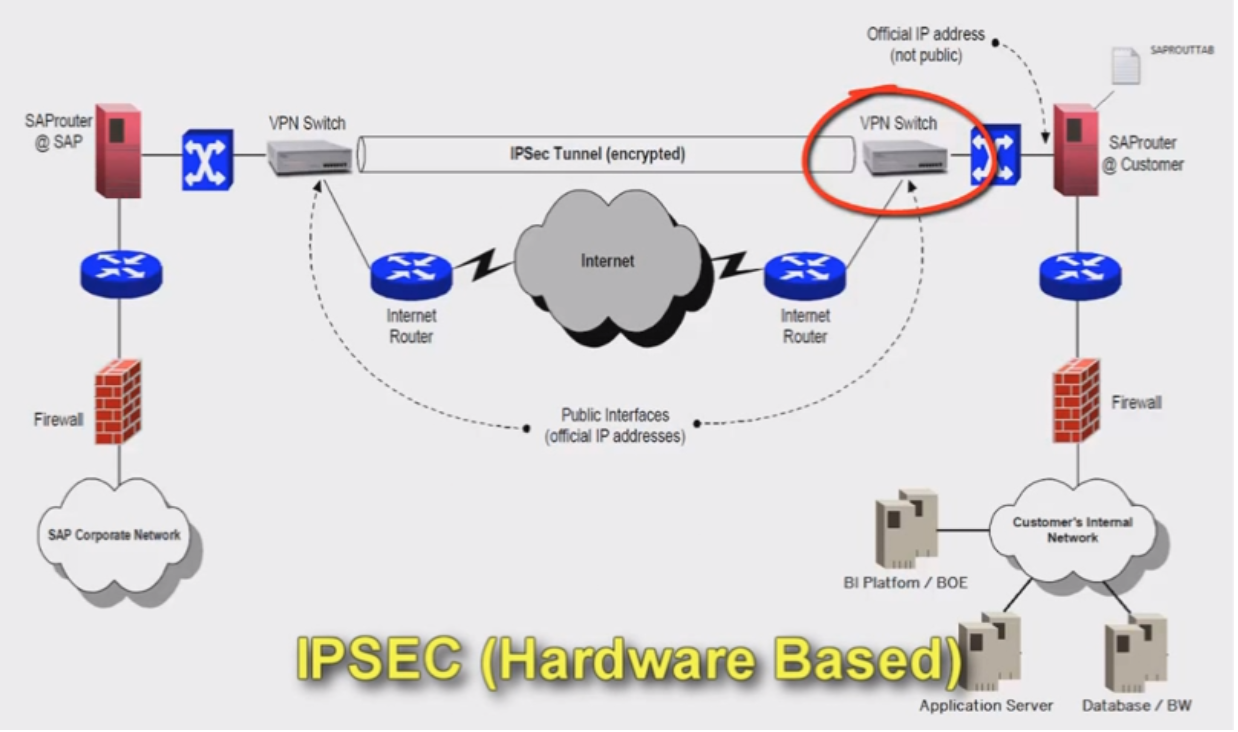 LAN-to-LAN IPSec VPNs are established between SAP and the customer’s network to provide data confidentiality and integrity services. These VPNs complement the leased lines in the current Remote Customer Support Network environment. State-of-the-art encryption, authentication, and access control technology will be employed. VPN equipment is required at both ends of the connection.

The VPN switch at customer’s side must be reachable from the Internet. SNC 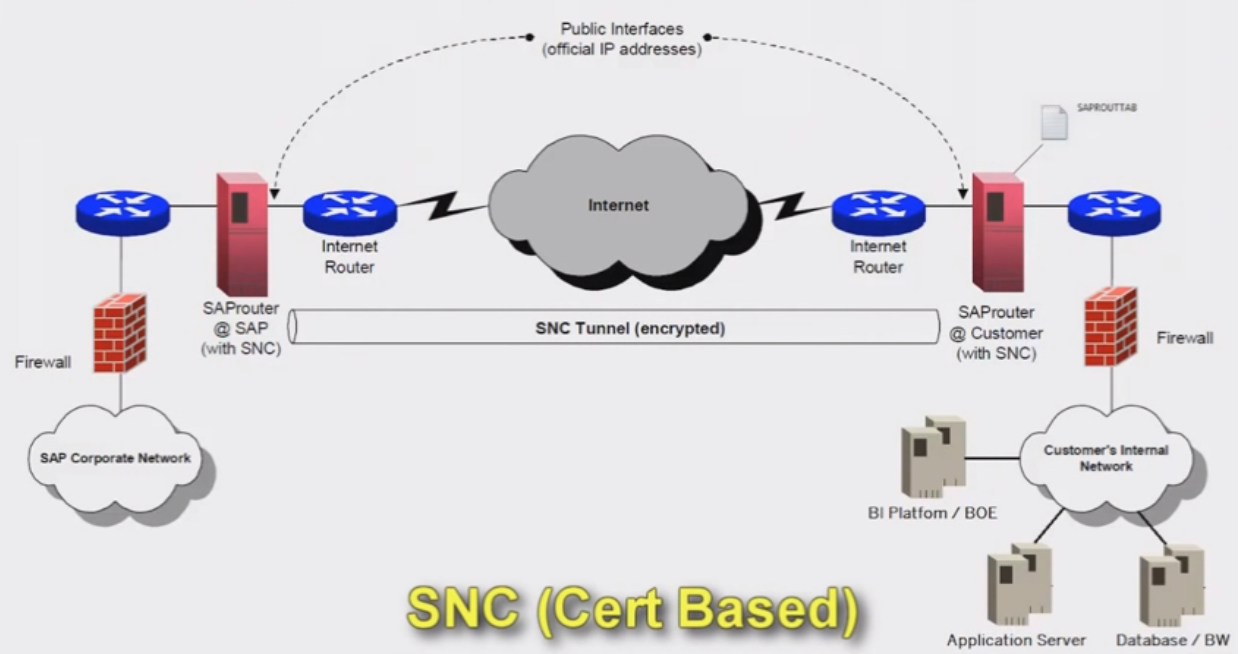 SNC is used to make network connections using the Internet, in particular WAN connections, secure. It provides reliable authentication as well as encryption of the data to be transferred. SAP router allows SNC connections to be set up. The route permission table can be used to specify precisely whether SNC connections are to be allowed, and if so, which ones. A comparison between both can be found here.

Secure Network Communications (SNC) integrates SAP NetWeaver Single Sign-On or an external security product with SAP systems. SNC protects the data communication paths between the various client and server components of the SAP system that use the SAP protocols RFC or DIAG. More information for SNC can be seen here.

8: What Levels of security will SNC provide?

There are three levels of security protection you can apply, they are:

When using authentication only, the system verifies the identity of the communication partners. This is the minimum protection level offered by SNC. NOTE: No actual data protection is provided!

When using integrity protection, the system detects any changes or manipulation of the data, which may have occurred between the two end points of a communication.

9: How does SNC carry out it’s encryption?

SNC uses the SAP Cryptographic Library. It is the default security product delivered by SAP for performing encryption functions in SAP systems. For example, you can use it for providing Secure Network Communications (SNC) between various SAP server components or for using the Secure Sockets Layer (SSL) protocol with the AS ABAP. Hashing Algorithms: MD5, SHA1, SHA224, SHA256, SHA384, SHA512, RIPEMD128, RIPEMD160 Encryption Algorithms : RSA, ELGAMAL, AES128, AES192, AES256, DES, TDES2KEY, TDES3KEY, IDEA, RC2, RC4, RC5_32 The SAP SAP Cryptographic Library uses public key technology. Each component is issued a pair of keys that consists of a private and a public key. The private key is to be kept safe on the server and the public key is to be distributed to communication partners in the form of a public-key certificate. Trust is established by verifying the communication partner’s public key provided with the public-key certificate. Both the Key Storage service on the AS Java and the trust manager on the AS ABAP provide functions for generating the key pair. These tools are available when using the cryptographic products provided by SAP. You can see more information on the public key certificates here. A Full list of details can be found here in SAP Note 1848999

10: What are route permission tables in SAP Router?

The route permission table contains the host names and port numbers of the predecessor and successor points on the route (from the SAProuter’s point of view), as well as the passwords required to set up the connection (corresponds to a substring). It is used to specify which connections are allowed and which prohibited by SAProuter. It also specifies whether SNC connections are set up and if so, which ones. This acts as another protective mechanism that can be used to control what SAProuter has access to your SAProuter and thus, what traffic can flow in and out via the SAProuter. The password that can be stored in the route string is stored as plain text.

11: How do I configure SNC in our route permission table?

All the configure steps are listed here

12: How does a customer’s SAP Router know what connection to accept from SAP’s SAP Routers?

13: How can I register my SAP Router with SAP?

SAProuter configuration requires SAP IT to add your external IP address to the SAP Network. This creates a secure communication route between SAP and your landscape. To register your configuration with SAP, follow the instructions in SAP Note 28976 – Remote connection data sheet to create a message with the necessary data so that one of SAP’s external partner companies will assist you. More information found here.

14: What are the most common types of connections for SAP Router?

There are many different connection types for the SAProuter but the two most commonly used connection types are IPSEC/VPN and SNC (your public/business internet encrypted with certificate).

15: Where can I get the certifications I need to establish a trust?

16: What is the process of SAP connecting to a customer’s SAP Router?

By default, route strings are sent without a password. The default value for service is “3299”, and the default password is “” (empty). The diagram below shows a sample connection between SAP and a customer system. In this example, an SAP service engineer working at sappc needs to log on to a customer application server yourapp, which offers or uses the service sapservice. 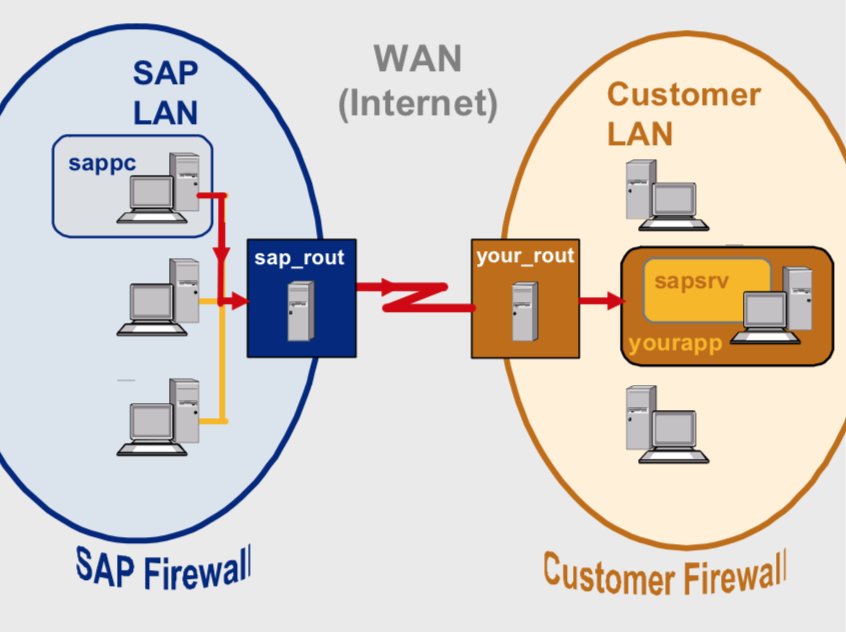 The connection from sappc to the application server is made in the following stages:

SAProuter always checks only the previous host name or IP address and the next substring (/H/…/S/…/P/…) for the host name or IP address, service and password. No password is used in the first substring, since the client is accessing itself. If the /S/ part is missing, the default SAProuter port number is used. If the /P/ part is missing, no password is used.

17: What are the port numbers for the different connection types?

Before reading the below ports, DO NOT confuse these ports with the SAProuter 3299. 3299 is the only port which is allowed open on the SAP Router. Ports to be allowed in internal firewall/router (for Secured connection):

18: When the connections are closed/open on the customer side, where does this occur?

This is done without involvement of Saprouter and is not done by changing the saprouttab, this is handled by the Framework itself. On the customer side, all connections can run via Saprouter and only this Saprouter port has to be allowed in firewall settings. The Saprouter supports only 1 port for listening for new incoming connections, no matter what kind of protocol is used afterwards, basically Saprouter needs the Route Information to establish the connection to the next hop. This route information has to be the first data packet on a new TCP connection.

A Route/Connection can be a raw TCP connection once the connection between Source and Target is established. This is the reason why also other protocols can run via Saprouter and not just RFC/DIAG protocols. SAP has to send the Route Information to the SAP side Saprouter and forwards the application traffic to this connection and SAProuter acts like a simple proxy then, so also a SSH/Telnet connection can be realised via SAProuter The exception here is HTTP/HTTPS connections on SAP side. These connections are handled by the SAP Webdispatcher, which acts as a reverse proxy on the SAP side but forwards its connections to the SAProuter on the customer side, so on the customer side, also HTTP/HTTPS comes in via the SAProuter port. The decision on where to forward the traffic is configured by the Route Information, which is also found with the SAP Webdispatcher, which then enables it to forward the connection on to the customer’s SAProuter.

The answer is yes, SAP has established and operates a dedicated PKI to allow Secure Network Connections ( SNC ) and Single Sign On (SSO) to access customer systems remotely. The dedicated CA only issues temporary generated certificates for the user SAPSUPPORT with a validity of 8 hours. This new secure remote access scenario is part of the SAP standard support package and eliminates maintaining the target user credentials in the SAP Secure Area. The SNC Name p:CN=SAPSUPPORT, O=SAP-SE, C=DE can be assigned to one or multiple users on the SAP application server. See SAP Note 2562127 for more information

This is one of the best blogs, I observed on this topic, in recent times. This blog is very elaborate & informative. Can you help us understand effect of SAPRouter deployment when linked with customer's AWS or Azure cloud? Once again, kudos to your excellent efforts.

I am not an expert with SAPRouter but in my understanding the process and recommendations are still the same.

When using VPN connection for sap remote connection. Can I have one SAP router in DMZ and one as an internal facing sap router?

Is it possible to use the Abap adapter in smart data access from native HANA trough a SAP route?

One of the best FAQs I have read, thank you so much for this details. I have a question, is there a place where I can see the Windows/Linux server versions supported for SAProuter? example where can I get the confirmation that windows 2016 is supported for installing SAProuter?

I have two questions!

How can I find where my SAP router permission file is located. The reason I am asking is that I have to use a router string to access my Integration Builder from PI but when using NWDS there is no option to put in a router string to connect to that PI system. So I am trying to learn about the sap router setup here.

That argument will point to the saprouttab (permission) file.

Use HTTP connection over SAPROUTER?