One of my SAP colleagues whom is also very active in the cycling community, extended a gracious invite to me to attend Stage 4 of the AMGEN Tour of California this past Wednesday. The invite included VIP access to an exclusive SAP tent near the finish line along with an additional VIP pass to the Michelob Ultra tent; all amenities included such as: beer, lunch, snacks, and much more.

What is the AMGEN Tour of California? History

It’s a cycling road race similar to the Tour de France where professional cyclist from around the globe come together and battle on our turf, here in California. The race is assembled of 7 stages, 1 day for each stage, traveling thru different counties, cities & towns, capturing the serene beauty of our beloved state.

I must admit, when I first received Cheryl’s invite hit my inbox while sipping on my morning 6 shots of espresso while reading my morning email at my office desk, I squirmed like a school boy youngster receiving his new bicycle for Christmas. I was floored! Next step….. clear it with the Manager – check! Next…. Clear it with the other boss, the wife, since I’d probably be home late and it was a ways off from home – check! I am good to go. Let’s do this!!

The excitement and anticipation kept me awake the whole night. Sleep was non-existent. I let the early morning commute simmer down before I jumped in my hot rod and raced to Morgan Hill.

This was a great plan, I got a primo parking spot right across the street from the starting line. This set the trend for the rest of the day > totally awesomest dude!!

Camera in hand, an Oakley sling bag on my back, I’m ready for this! The early bird catches the worm and this old phrase was certainly going to live up to its hype. I was able to witness the setup crews setting up the course, the podium, etc. The many booths featuring popular brands in the Cycling industry were also setting up. I engaged with many conversations with reps from my favorite brands like: Oakley, Specialized, Factor, ASSOSS, & SeaSucker. Freebies were being slung at me from every direction, it was great! The only drawback was that I should’ve brought a larger sling bag or backpack to contain the many gifts.

SeaSucker is a company that develops a very unique and innovate bicycle rack system utilizing suction cups. I’m a huge fan; I have one at home. Because of its suction cup technology, the system is compatible on any vehicle or anything with a surface. If you have multiple cars, this system will save you a ton of money from not having to purchase a bike rack that’s specific to your vehicle. I paid close to $2k for the Thule system for my ’15 Focus ST. Multiply that 4 times for the amount of vehicles I have, that would be a whopping $8 grand. The SeaSucker system costs between $300-600 bucks and will work on any of my vehicles. Huge money savings.

Anyhow….. 2 out of my 9 bikes have a thru-axle system which can make mounting challenging for a fork mounted rack. The SeaSucker rep demo’d one of their new future products called the “Huske” mount which is “for” thru-axle hubs/fork setups. This Huske mount isn’t even offered or sold to the public yet and guess what; I’m now an owner of 1 out of 15 made. Score!!!!!

I couldn’t sit still, I had to keep moving (I’m like this at work too). I found the staging area for all the professional cycling teams. I was star struck. I had my camera in one hand snapping photos like there was no tomorrow, and my iPhone in the other hand streaming live on FaceBook so I could share what I was seeing with the world.

I started having flashbacks of when I was an early teen. I used to race and was even on cycling team called “L’equipe Delta”, our coach was French. My passion for cycling was strong back then as it is now. I was quickly drawn to a couple of highlights of my past:

Those feelings of joy I felt back then, were overwhelming me at this very moment, especially when Peter Sagan came out of his team’s RV to sign autographs and meet the fans. Then again while watching, Taylor Phinny, from EF/Drapac team weigh-in his bike (was a fan of his father too, Davis Phinny, whom also was on the 7-Eleven team in the 80’s). Then afterwards another well-known pro, Peter Sagan’s, road rival from the controversial crash of last year’s Tour de France, Mark Cavendish, while he arrived to the weigh station while wearing his super bright orange cycling shoes that you could see a mile away.

Off to explore some more……. Up comes a huge trailer hosting a massive TV screen. Must’ve been at least 10’ wide. First thought: where can I get one of these for my family room? I turn my camera on to snap a photo. Immediately when hitting the shutter button (perfect timing) our SAP commercial comes on which then pulls me back to reality of how I’m fortunate enough to be here at this very moment. I say secretly to myself, “thank you SAP, you definitely are a super badass place to work”!

As I’m wondering around, my mind begins to wonder as well. I have often wondered why SAP hasn’t engaged much in the sport of Cycling, especially since this is a global sport, not local. After all, we’re heavily promoted in Ice Hockey (another sport I love and played as a youngster). Then I see our SAP tent. Then our SAP banner that spanned at least 30-40 feet on the inner course barrier and I think, “yeah SAP, there you are, I knew you’d find your way to the spectrum of cycling”.  A sigh of pride gestured thru my lungs.

Today’s stage was an individual time trial. There were 116 racers and their mission for the day was to ride 21 miles by themselves with the fastest time. Each rider starting @ 2 minute intervals. Without realizing it until it happened, 116 times, each racer rode (or shall I say flew) past our 30ft long SAP banner. 116 times!!! Talk about huge exposure. Do you compute and understand the magnitude of what this means? SAP’s logo was promoted on TV and every spectators line of site, a minimum of 116 times!

So, I’m a social media junky; I’m on Instagram & FaceBook. I post all the time, maybe too much, but I’m also followed by many folks in the cycling community, other enthusiasts & manufacturers alike. One being, “Bar Fly Bike” which is a local company right here in the Bay Area. Bar Fly follows me on Instagram, and I gather some of the #hashtags I used in my recent postings triggered the owner to message me privately via Instagram. He wanted to know what SAP was, he said he noticed the banner, the promos on the big screens, and my numerous hashtags #sap, #sapsv, #thebestrun. Evidently the SAP marketing teams’ efforts were spot on. Well done SAP Marketing Team!

This day, this event, with SAP colleagues, representing a company and a hobby I have enormous passion for, just seemed right. It’s a match made in heaven and one that will be etched in my memory along with those of my Dad, Andy Hampsten, & Raul Alcala of the 7-Eleven team.

I could only hope that this will be the first of many seasons that SAP will participate in the AMGEN Tour of California. If so, I hope to be there representing our SAP mission, with pride! 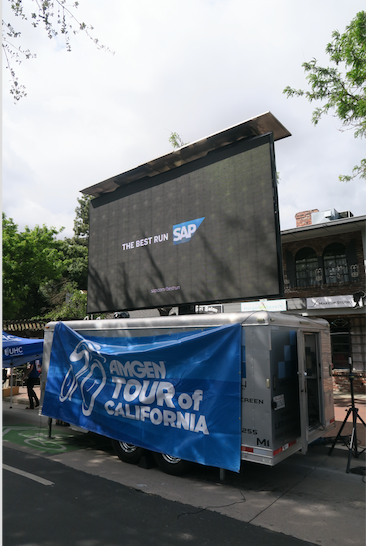 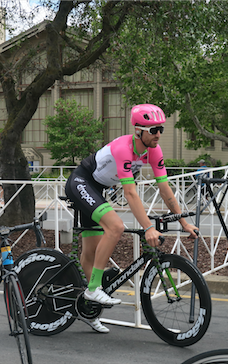 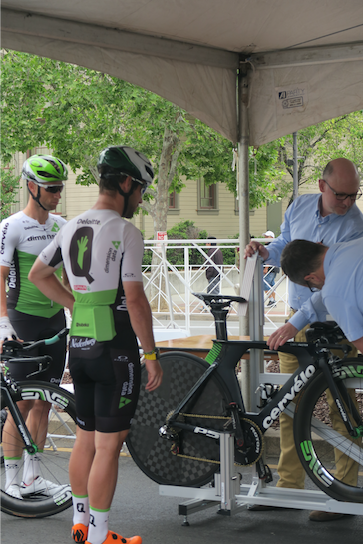 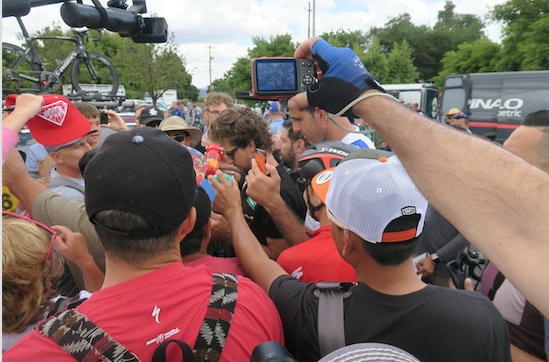 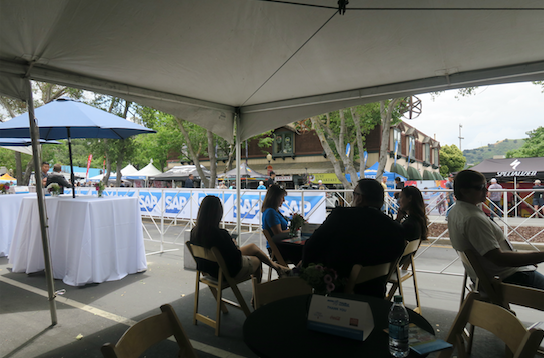 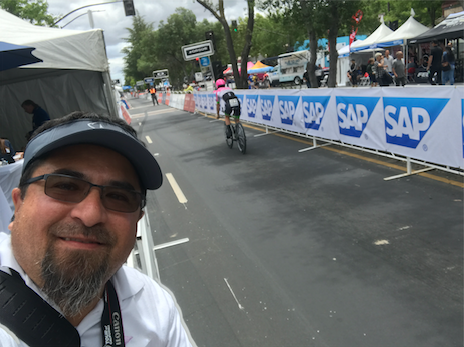 Thank you for taking me on your journey Landon! Your passion is real!

Awesome read ,Landon. Thank you for capturing the moment. I enjoyed every minute there too.