In my personal experience, most of the tutorials and examples have been well received on Proof of concept levels and easily reproduced for own use cases with Raspberry Pi’s, ESP8266, Arduino kits, etc. I think they are very good for prototyping and event piloting. However, a German PLC (programable logic controller) manufacturer took these experiments to a different level. They embedded the device connectivity and on boarding processes with SAP Leonardo Foundation, right on their PLC. This enables WAGO PFC200 to get SAP Leonardo Certified. It provides data connectivity and security out of the box with SAP Leonardo technologies. This article describes some of the silent features of the effort which was presented at the IoT World 2018, Santa Clara.

The WAGO PFC200 Controller is a compact PLC with network and fieldbus interfaces. The controller supports digital, analog and special I/O modules. It also has a mobile radio module which supports SMS and provides wireless Internet connectivity. It allows developers to do PLC programming per IEC 61131-3 standards 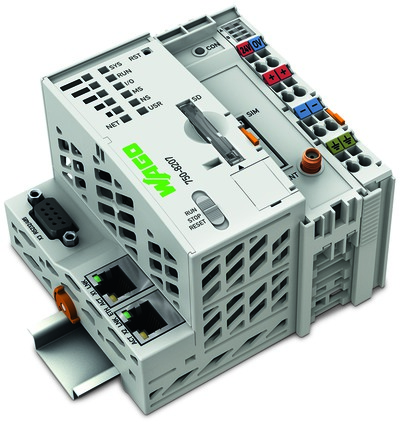 The SAP IoTConnect365 enables the WAGO PCF200 to register and communicate via a GSM network worldwide. A personalized tariff profile for the WAGO device enables selecting and deselecting mobile operators of choice globally for the SIM card used by the device. The Dashboard offered by the SAP IoTConnect365 helps you to monitor the current data consumption of your device in real time anywhere in the world – a one SIM solution for a global connectivity. This device is having an embedded web server which hosts a web application that can be used for configuring the payloads, security, cloud connectivity and many other parameters.

The Most interesting part of the embedded server is that it offers a native MQTT client that can be configured to send a payload that confirms to the SAP Leonardo IoT Services APIs. This runs natively on the firmware in the PFC200. The embedded server offers a Wifi access point which can be reached by any tablet or laptop for further configuration. This configuration screen allows the user to select the cloud connectivity provider. Among other vendors, SAP Leonardo is also part of the connectivity options on the PFC200. 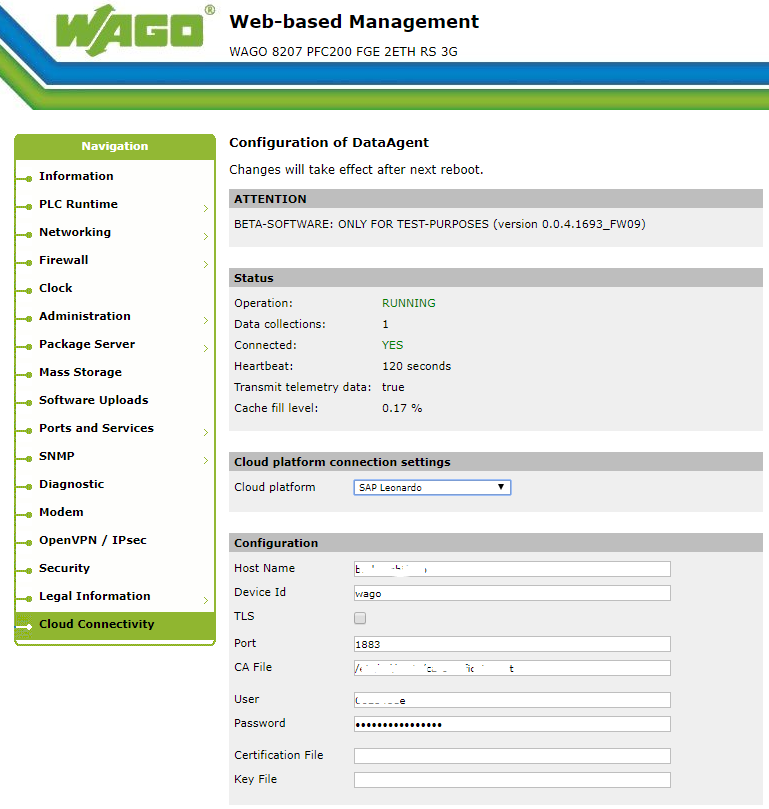 The Data agent on the PFC200 uses the cloud connectivity configuration to dial out via GSM and use MQTT(s) to establish a secure communication with the SAP Leonardo IoT Services. The Data agent in the embedded server builds the needed JSON payloads for the SAP IoT Services APIs.

This data is then forwarded to Kafka, consumed and persisted in the SAP IoT Application Enablement. A Thing Model as a foundation, allows unlimited possibilities to use the data from these sensors in different SAP Leonardo applications.

For example, using the SAP WebIDE, it is possible to build a custom UI app which can represent the different statuses and charts from the equipment. The SAP IoT Application Enablement provides such templates in the WebIDE. The Thing Model persists data which is also consumed by other SAP Leonardo applications. Maximum re-usability of models and data can be achieved using the Thing Model APIs on the SAP Cloud Platform. These resources could be a good source to start :- https://www.sap.com/developer/topics/iot-application-enablement.html

At the HMI 2018 event in Hannover, Germany, I had the pleasure to work with Engineers from WAGO at the SAP Makerspace pod. In a matter of 2 hours, we were able to build an end to end scenario with an app deployed on the SAP Cloud Platform that was monitoring the Water kettle at the SAP stand bar. Below is a high-level overview which shows the different components end to end.

This article shows how an industrial device can be connected to the SAP Leonardo Foundation via standard APIs and protocols. The above setup was presented at the IoT World 2018 event in Santa Clara, CA. The WAGO PFC200 is now on its way towards an SAP Leonardo certification. More can be expected from these efforts in the future. Any feedback or questions are warmly welcomed.

That's a great news! Thanks for sharing

And btw if you have some cool examples to share as well with ESPs and RPis, then do not forget to post them at https://www.hackster.io/sap as well.

Nice One! Thanks for sharing guys!