Implementation details are listed below.
1. Cloud Connector installation and setup
Download from this url.

Once installation is done, launch and ensure it appears in the service list of your OS:

Create a new Connector instance, I name it as Jerry_SCC. The Region and Subaccount should be maintained using the corresponding fields of the SAP Cloud Platform to be connected.

In this UI a mapping relationship is maintained to link a virtual system to ABAP On-Premise system. The virtual system created by me is named as my-backend-system, which points to an internal ABAP system AG3. Specify Protocol as RFC. If everything is correctly maintained, press check button and the status of ABAP system would be marked as Reachable.
Maintain Function Name as STFC, and Naming Policy as Prefix. It means function modules in AG3 with prefix STFC are available for this Connector instance.

The destination setting could be found below. I name it as my-backend-system-destination, here the user and password in ABAP On-Premise system is filled.

3. Create Java Web application to consume destination created in step 2
The whole source code of this Web application could be found from my github.
Deploy it to SCP.
Brief introduction of core code:
(1) in line 28, get Destination instance by name. The name is specified in step 2.
(2) in line 31, get handle of ABAP function module STFC_CONNECTION.
(3) in line 35, get user input passed via url.
(4) in line 38, fill the user input to importing parameter REQUTEXT of function module STFC_CONNECTION.
(5) in line 42, execute function module.
(6) in line 45, 46, get execution result. 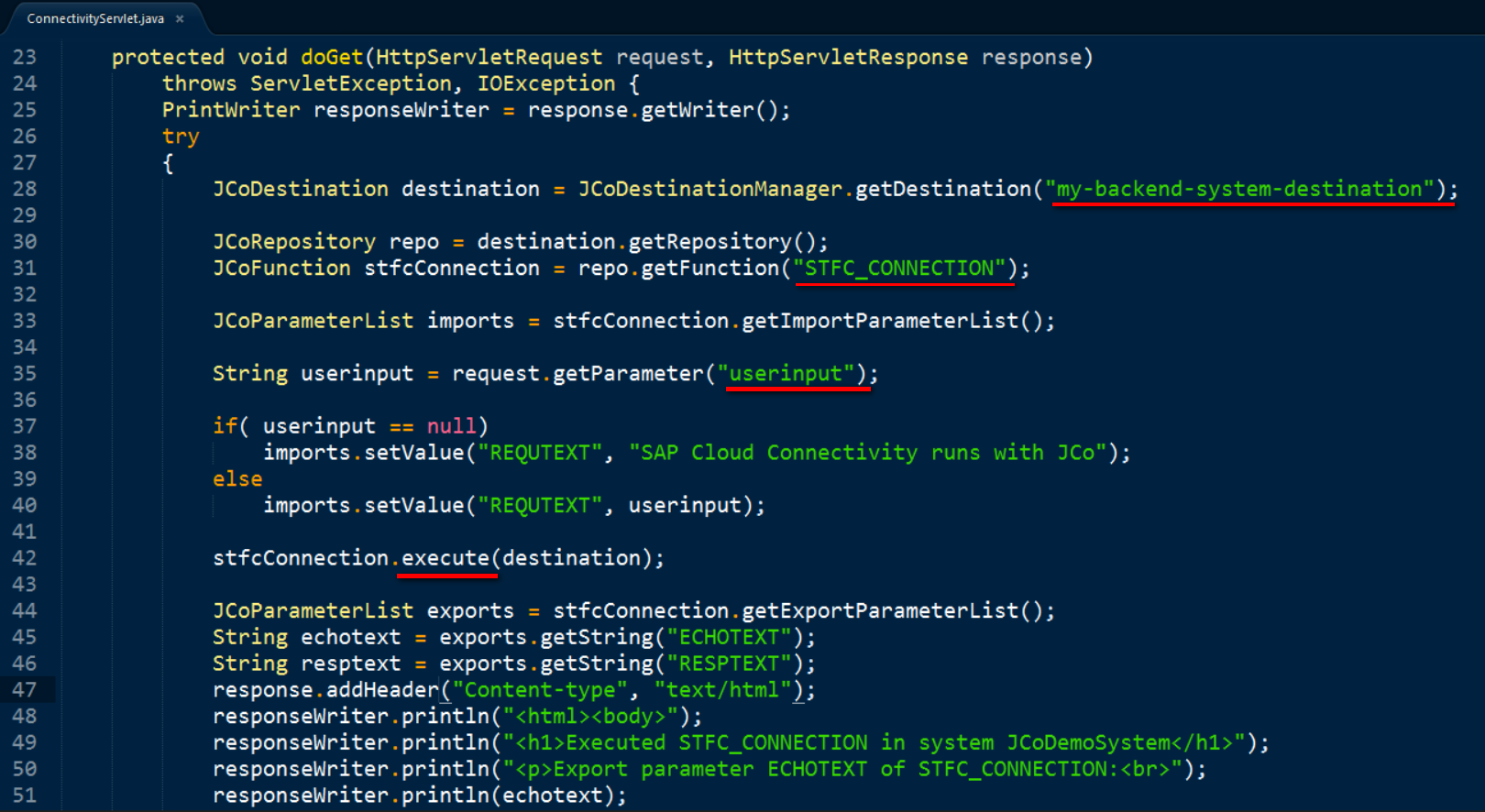 Also set a breakpoint in STFC_CONNECTION to double confirm that it is really called by my Wechat access in mobile phone via RFC:

Hello Jerry, what is the advantage to use java instead of using standard RFC adapter in CPI?

Any success to repeat this in the SCP Cloud Foundry ?? I assume here that the steps above to connect to ABAP RFC are for SCP Neo. I have working ABAP RFC connection in SCP Neo, but I cannot make it work (UI check - test connection) in SCP CloudFoundry ... any help appreciated.

Have you tested successfully on CF about the ABAP RFC call? I got "

I'm not sure since when this is available in CF. But I've managed to make an RFC call from Cloud Foundry with the following code:

Please use the branch logback as I've made some changes to a more simpler version (master).

I am looking for this scenario, please confirm if this is possible and where to find the technical document ?

Ray Yang
I have the same issue using cloud foundry and Jco.

I’m unable to see many screenshots like below which are providing for reference. please check if these can be enabled.