(The S/4HANA Generation – SAP UX Integration) Back to The Portal… 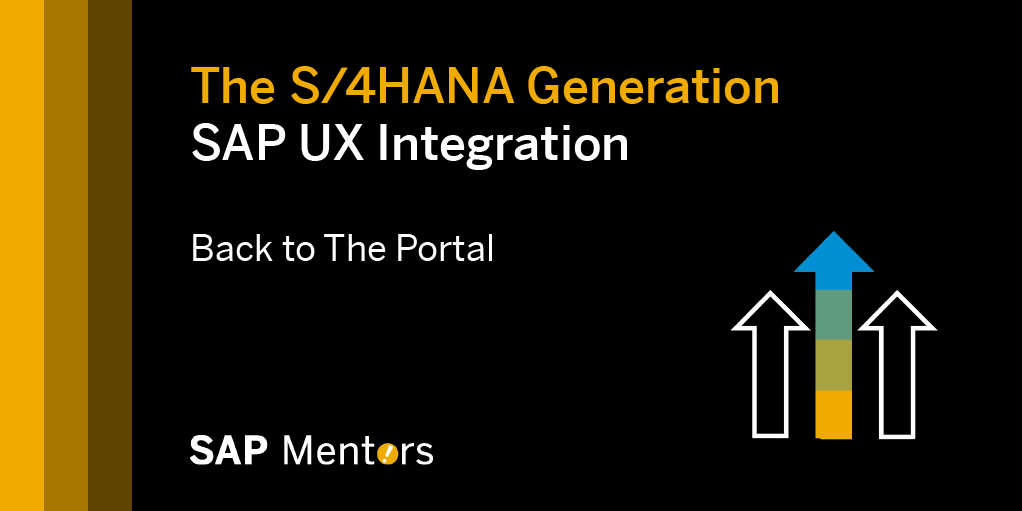 Where to start, so much has happened and there’s so much to say… ok let’s start from the beginning…

And instead of just sleep walking into S/4HANA, I mean instead of just doing an in place transition from ECC to S/4 we’re using the opportunity to holistically look at our whole SAP setup, from the End User UX to the Monitoring and Operations Tools and, the complimentary SAP Products and everything in between.

I saw this blog Support for SAP S/4HANA Implementation from Scratch in Five Phases written by Ute Rueckert Daschakowsky and from the title was really looking forward to read some interesting, relevant and useful material, but the anti-climax was, to benefit from that blog’s reference material you have to be a SAP Learning Hub Customer which we’re not.

In this series I am going to publish complimentary blogs to help other colleagues in the SAP Community with their S/4HANA implementation challenges and considerations.

The S/4HANA UX strategy is very well documented, and SAP have provided many very high quality resources explaining and enabling the User Experience in S/4HANA including SAP Best Practices for UX in SAP S/4HANA and UI Technology Guide for SAP S/4HANA 1709

This means as a Customer when we are planning our future S/4HANA vision, we need to provision SAP Fiori.

There are three basic ways to provision SAP Fiori for S/4HANA, these are: 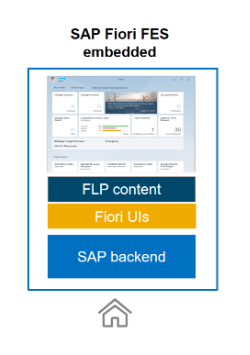 SAP Fiori Front-End-Server as a hub: 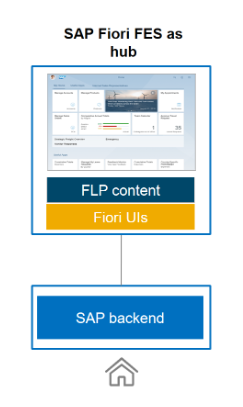 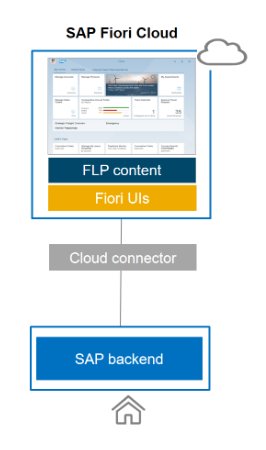 We have spent quite some time on the question of how to deploy Fiori, Embedded, as a Hub or in the Cloud.

We looked at having Embedded Fiori on the S/4HANA system and concluded against that for a few reasons including:

. Looking to the future we foresee that we will have many Fiori enabled SAP Products and we’d like to have a User Experience where the Users have a Single Point of Entry for all Fiori applications across all SAP Products, only 1 Url and not having to keep Bookmarks or Favourites in the Web Browser for conveniently storing  the Urls

. We have a long journey ahead with S/4HANA and the goal is to consolidate all ERP’s in the company into the Single ERP S/4HANA. This means in some years, a huge number of people will be using the S/4HANA, and we didn’t want to have the overhead of the Fiori workload on the S/4HANA

This lead us on the path to the Fiori Hub scenario.

And hence this is why in here SAP are recommending that for S/4HANA, the Embedded Fiori is used. This situation will be resolved in the future but it is not known when.

On the other hand, the OSS Notes for the different Fiori releases have shown that even when a new version of the Fiori is released, in a lot of cases the previous versions SAP Fiori Backend Components will still work, this is visible in the following OSS Notes:

Local Fiori on S/4HANA, I wouldn’t recommend for the reasons above.

Fiori Hub, this is the most elegant, Single Point of Entry, but both On-Premise and On-Cloud it currently has limitations and it has to be your decision which way to go based upon the costs and benefits.

If your priority is the User Experience and the Single Url then the choice is clear.

And what about the future, that’s the title of the Blog isn’t it,

why the title, (The S/4HANA Generation – SAP UX Integration) Back to The Portal…  ?

It was around 2013, that in my eyes at least, the SAP Portal story started to become confusing for Customers. SAP Portal had always had its place as the User Experience Integrator for SAP, but when Fiori and the NWBC came along, Customers rightly questioned the need for the investment in the SAP Portal when there is the NWBC, and especially why to have the Portal when it is possible to have a Fiori Hub ?

And hence why the blog, why the title, Back to the Portal ?

It’s interesting, in 2013 just over 5 years ago, I posted this blog, SAP Portal Architecture – SAP Hana Cloud Portal as the Doorway to the Enterprise’s off-premise AND on-premise business software the blog discussed using the SAP Cloud Portal as the Single Point of Entry to Customer’s SAP systems.

Let’s fast forward to today, and the latest version of the SAP Guide, SAP Fiori Deployment Options and System Landscape Requirements is communicating in the Introduction that for the future it is SAP’s recommendation to use the SAP Cloud Portal Service as the UX Integrator:

As the guide which was published in February 2018 states, it is SAP’s strategy for the future, that SAP Cloud Platform Portal is aimed to act as a UX Integrator and to offer the single point of entry and with other features and benefits.

And now we see, with the SAP User Experience Integration, we are Back to the (Future) Portal. 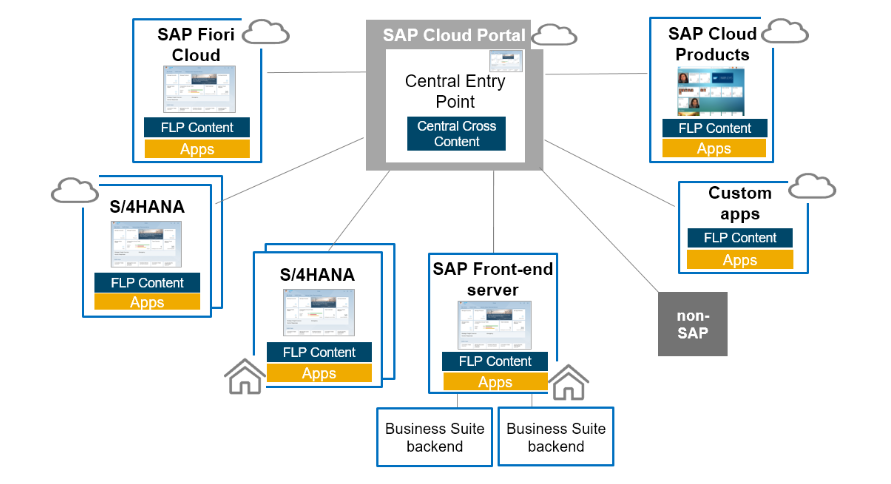 The final recommendation from my side, whatever you are doing with S/4HANA and Fiori, whatever your long term plans are for SAP UX User Experience, start putting the SAP Cloud Portal into your SAP UX RoadMap because SAP have it in theirs. 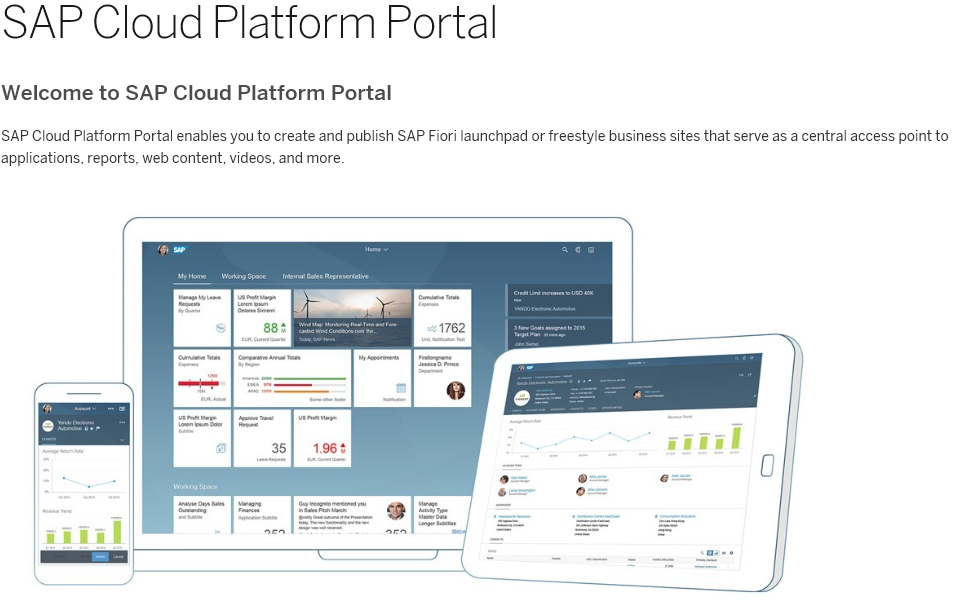 We are now entering the SAP Cloud Platform Portal Generation.

Nice blog Andy.  I've been using the cloud portal service for over 2 years now and I'm a big fan.  I think that as a Fiori Launchpad the cloud already beats on prem.

As an example, one of my customers is about to upgrade the UI5 version from 1.44 to 1.52.  On the cloud portal we just change one setting (in the Fiori Configuration Cockpit) and the upgrade is done.  If we want to maintain one Test launchpad at 1.44 to support Prod, no problem.   We can create as many as we need.

There is also a big advantage in terms of connectivity.  Your users can connect to the portal from mobile devices without needing to use a VPN.

I'm sure you've already checked in the Fiori App Library to see which standard S/4 apps are available on Fiori Cloud.  Not all of them are so that is something to keep in mind.

Good luck with the project and I look forward to future blogs on your journey.

One the biggest advantages which I have always advocated for using SAP Cloud Portal as your Internet & Intranet single point of entry is that in doing so, you outsource all of the Internet Facing Security head ache to SAP.

What I mean is, whatever WebSites we have facing the Internet, whether it's SAP Portal or SharePoint or Apache, we need to keep up with the latest security vulnerabilities, we need to do regular penetration testing, we need to ensure that the Authentication mechanism is secure and right up to date regarding vulnerabilities. But by using SAP Cloud Portal, we give all of this effort overhead, and investment overhead, and headache and responsibility to SAP.

Passing the Internet Facing Security responsibility to SAP is one of the biggest advantages in my opinion for using the SAP Cloud Portal instead of your own solution.

Thanks Andy for the great blog, great approach. Single tunnel(SAP cloud portal) to the complex world of SAP  is what makes more sense. I will say it is more like a common interface for all the applications which are hosted on premise/cloud.

It brings in too many advantages for example

yes, that's true, SAP and Non-SAP can be contained in the Cloud Portal.

Have a read of the Admin pages

Very nice blog Andy on a topic I am passionate about. As Mike Doyle stated I find the cloud version much easier to maintain than the on-premise version and definitely better not having to go through VPN's and network logins which can be painful especially with the distributed workforce being the future.

Nice also that you covered the different options with FES, no FES and Cloud. The environment architecture is definitely one that needs to be thought about so thanks for providing the context.

thanks for the feedback.

I’d love to understand from you or Mike Doyle or anybody else who has the actual experience, who's done it (because I haven't yet), with the SAP Cloud Platform Portal Service or Fiori Service, are there ever situations where there are Version dependencies between the Cloud Service and the OnPremise SAP Backend systems ?

Either way, Cloud Service or OnPremise, does for example upgrading on one side, create dependencies on the other side ?

Very nice blog. I liked to see the step by step analysis. One comment on your sentence " but the anti-climax was, to benefit from that blog’s reference material you have to be a SAP Learning Hub Customer which we’re not. "

If your company has an Enterprise Support (which is the most common case) contract, then you can access the trainings mentioned in the blogs in the Enterprise Edition of the Learning Hub. If this is the case, you can signup here. This would allow to display trainings available in the ES maintenance contract without additional fee.

Learning Hub comes in different "editions", the ES edition (which is "support" oriented)  can be accessed by ES customers, then every customer can purchase (or not) other editions for additional training possibilities.

thanks for the tip, I clicked the linked and the did the registration with my S User.

It says I have wait two hours for confirmation. Once I get it will give it a try and let you know.

You are welcome! Please note, that because it is a support based offering, some of trainings types (such as the EGIs mentioned in the blog) have to be limited by a contingent (renewed every year), so you will need to chose which one to attend. The "replay" type (called MTE) of training, usually less than an hour, can be consumed as much as you want and do not have a limit.

I've just logged in to the Learning Hub using my corporate S User  and I can see everything.

To tell the truth I don't understand the Learning Hub and am reluctant to click anything incase it triggers an invoice.

Does SAP have anywhere where it is clearly explained for Enterprise Customers what is included in the price on the Learning Hub and what is not ?

I know the Learning Hub used to cost a fortune and we stopped subscribing to it because we weren't using it enough, and on top of that, I never liked that the Training Courses on the Learning Hub were "online" only and not available for download and offline access, eg on a flight or something.

I used to like the Knowledge Warehouse and all of pdf's.

You mentioned the below in your blog.

My understanding is that Fiori Cloud supports creation of multiple Fiori Launchpads each connected to a different backend system. Depending on the access points, there may be different approaches to it.

Nice post but I still have one question. Do you know how the Portal deals with different SAPUI5 versions?

It could be possible within an system landscape (e.g. embedded deployments) that there are SAPUI5 version differences between systems.

When the portal, according to the future direction, becomes the UX integrator, how does the Portal deals with applications build on different SAPUI5 versions?

I could think of possible outcomes:

Nice and interesting blog. However I have difficulties to position SAP Gateway in the pictures. SAP Gateway is recommended to be deployed as central hub. However is this still possible in the S4HANA scenario? The relation of SAP Gateway and the different Fiori components is not yet clear to me. Can anyone help?