In an age where the speed of business continues to increase, companies are experiencing a profound impact from the digitalization of their core data.  As a result, their customers want (and expect) to interact with them via mobile channels.  However, the majority of CIO’s complain of insufficient resources skills to drive this digitalization, resulting in a significant application backlog.

The target business scenarios for Mobile Development kit are:

1. Enterprises that need to rapidly develop native mobile applications and who:

With Mobile Development Kit, development is done in a cloud environment using wizards and drag and drop UI elements.   There is no need to develop low-level functionality such as lifecycle management, authentication, security, and offline synchronization, as these are provided by mobile services.  This not only speeds development and enforces best practice, it means that developers who understand the business needs, but lack native app development experience, can quickly be productive.  More importantly, it means that developers can be drawn from a much wider pool of resources.

2. Enterprises that need to customize SAP mobile development kit based applications such as SAP Asset Manager

Since the customization is done using drag and drop IU elements and wizards, there is a lower learning curve for users within a company to get up to speed on tailoring the application.

Mobile development kit is a framework that allows users to create and customize enterprise ready mobile applications quickly and efficiently. 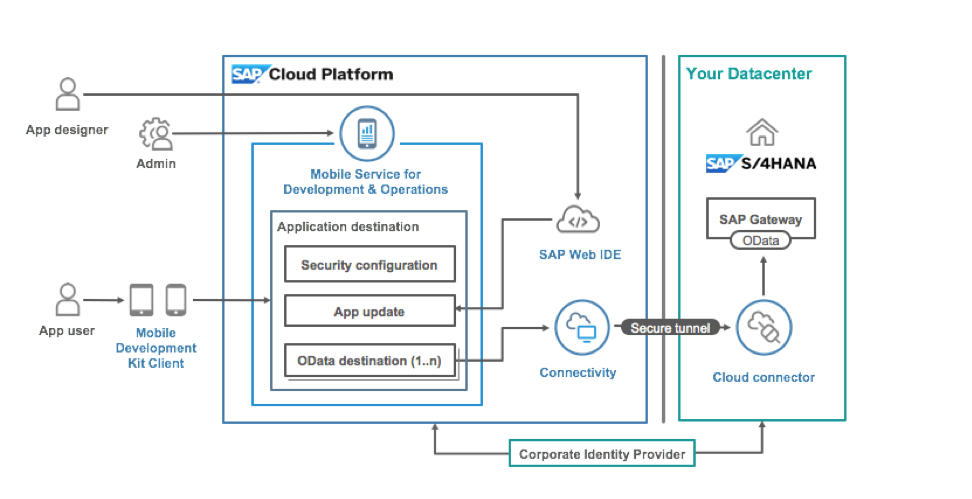 Application development is web based, and the mobile development kit framework utilizes the following components:

Mobile development kit application development is web based via the editor, which is a standard plug-in for Web IDE.  The plugin leverages the templates and wizards already available in WEB IDE and adds additional wizards, drag and drop UI elements and app templates to implement business logic.

The development is visual using drag and drop UI elements and wizards.  However, if custom functionality is needed to meet specific customer requirements, custom controls can be developed in Swift and brought into the Editor for consumption.

When development is complete, the application definitions are deployed from the WebIDE editor to mobile services with just a few clicks.

The client is a native application that runs on apple devices.  The client can run applications offline and can access the device Camera or photo library to attach pictures to an object.  The client applications exchange data with the backend systems via OData destinations defined in mobile services.

When the client is first installed, it does not have the application definitions.  It downloads these definitions from mobile services the first time it connects, and then will automatically check for new updates at a configured interval. If a new version is available, it will download the new definitions in the background and force a local OData flush operation to commit any pending local changes.

The mobile development kit uses an offline store so that end users can interact with data anywhere.

Once the user’s identity has been established, OData from the backend is managed by the client through the following steps:

The mobile development kit ensures that data is managed securely every step of the way. All network communication is encrypted with TLS. The connections between the app in Cloud Platform mobile services and both SAP WebIDE and the OData backend are based on the cloud identity of the developer or administrator. These connections are configured in mobile services.

Communication between the client and mobile services is based on the identity of the end user. This identity is established during a one-time on-boarding process. After on-boarding completes, the client receives an OAuth2 token from the identity service. This token is used to authenticate all requests to App Update and the OData service. The user’s identity may also be used to determine which data is sent to the client.

During the onboarding process, the user must set a passcode. Following this, the user must enter the passcode to access the app. The timeout period and the number of allowed retries, among other settings, are configurable. The user may also use TouchID instead of entering the passcode.

To read more about Mobile Development Kit, please check out the following links:

Help documentation is available at:

A Learning Map is available at:

You can find up-to-date info on Mobile development kit in new documentation.