This document describes in a detailed step-by-step approach the preparation and creation of an email campaign with follow-up actions and the execution of all these actions.

The document distinguishes between the following types of campaigns

The information in this document is based on release 1805 but most described features are available since 1709.

The document consists of 4 chapters:

It is important to know if the target group has a relation to a segmentation model because it influences in the campaign UI which email content is allowed for use.

The target group stores also the information about the segmentation object.

This segmentation object has two important aspects for the email campaign and its execution:

Definition of the keys

The business object in the key definition must be CUAN_INTERACTION_CONTACT.
The target group contains interaction contacts as members.

The business object in the key definition must be CUAN_INTERACTION.
The target group contains interactions as members.

In the email editor one can define if the email shall be personalized by using attributes defined in the segmentation object. The data sources behind this segmentation object are used in generated SQL statements for the retrieval of the personalization values during campaign execution. The definition of the data sources (e.g. the modelling of the assigned database views) influences the performance for the retrieval of the personalization values and hence the performance of the execution of the email campaign.

From the perspective of campaign execution based on dynamic target groups that themselves are based on segmentation models, the concepts of retention period and dependent target groups are important, as well as how these concepts are related to each other.

Dependent target groups show some kind of logical connection between their members. Such dependency is one of the following:

Therefore, it is strongly recommended to make use of the retention period to keep dynamic target groups free from too often a rebuild and keep their members stable. If you make use of randomized target groups this is especially important. The duration (interval length) of the retention period depends on your campaign runtimes, and execution schedule.

For example, you have scheduled 3 campaigns to be executed one hour apart from each other once every week, and each campaign execution takes around 100 minutes, you will have for 40 minutes 2 campaigns executing in parallel. If these campaigns are based on 3 randomized, dependent target groups then you want to keep their members stable for at least 3 hours until the last campaign has started. So you would set the retention period no shorter than 3 hours in this case.

Example if no retention period is defined:

You have defined 3 dependent target groups TG1, TG2 and TG3 which are used in 3 campaigns CPG1, CPG2 and CPG3.

Campaign CP1 and CPG2 start at the same time at 10:00. For both campaigns a rebuild of the target groups will be done (because no retention period is defined). Both rebuilds are running in parallel but only one does the rebuild, the other one waits until the first one is finished and does no rebuild.

After rebuild is done the execution of campaign CPG1 and CPG2 starts sending the emails EM1 and EM2.

Campaign CPG2 ends at 10:07 because the size of target group TG2 is smaller than TG1.

At 10:12 Campaign CPG3 starts. It starts with the rebuild of target group TG3 because no retention period is defined.

While target group TG1 is rebuilt the execution of campaign CPG1 cannot access the members of this target group. 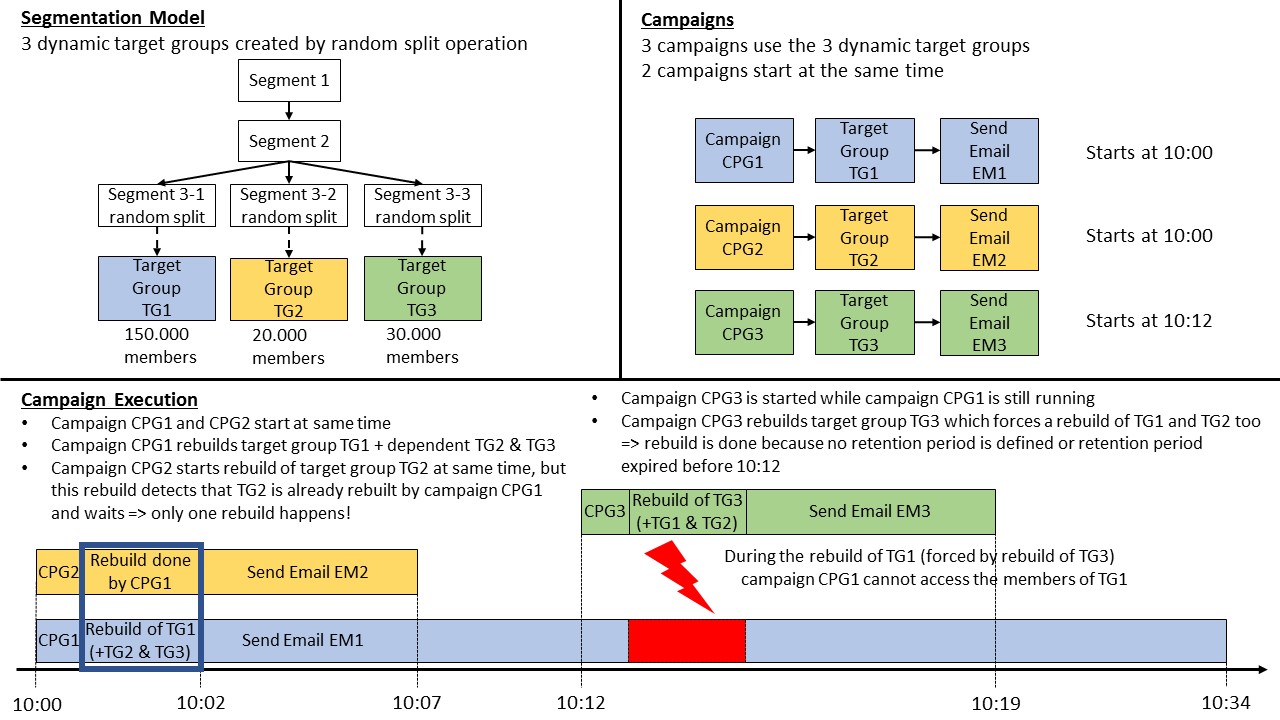 This adaptation prevents that the member list of target group TG1 is changed while campaign CPG1 retrieves the necessary data from this member list. 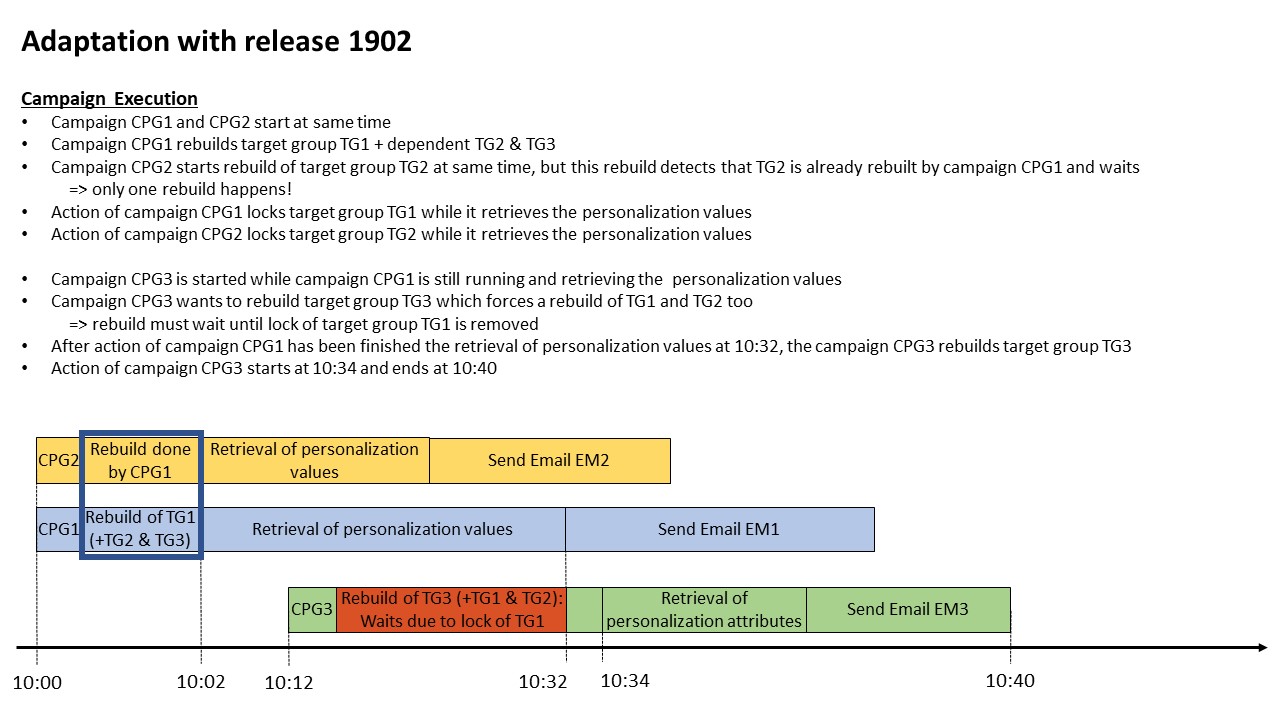 You can also check the SAP note 2075429 in case you detect issues with segmentation.

Next chapter Email content and usage of personalization attributes