In this post I think about the silence of workstations and what that represents to me, and the new ability to look at maintaining software and services in a completely different way – via containers.

Another Monday morning is upon us, and it’s a public holiday here in England. But I wanted to publish a new set of thoughts, related to what I’ve written about previously. Not least because I know that there’s at least one person going to read them (thanks Julie).

In a previous post (Monday morning thoughts: upload/download in a cloud native world) I described the sort of devices upon which I started my mainframe-based career in computing. A common factor was that those devices I used to interact with were dumb. But there’s another common factor, that extends further back in time – to my first personal computer, an Acorn Atom. This common factor was the lack of any discernible noise from the devices themselves. OK, the paper printer terminal made noise when it printed, but that’s understandable. Silence resounded loudly at my desk in my bedroom at home, and in the office at work. There weren’t enough electronics under duress in the dumb terminals to warrant any active cooling with fans, and while the 8-bit 6502 processor inside the Atom might have got a little warm sometimes, again, it was silent as there were no fans.

And so I was reminded again of these times as I spun up a new virtual machine (VM) running a Container-Optimised OS on the Google Cloud Platform (GCP). My work-based workstation runs macOS, but really all I run is Chrome and a number of terminal emulation windows. So there’s really no real stress on the MacBook at all, and no reason for a fan to kick in.

Yes I do run Outlook and its brethren, but only under duress and shut them down again as soon as I can. The real work (i.e. not email) happens elsewhere – in this case while connected, via Secure Shell (SSH) to that new VM. Just characters on an emulated terminal screen, and the only idea I could have of how much stress that machine is under is by actively looking at the output of a command such as top.

When I’m connected to my remote virtual machines, what am I doing? Well, let me answer that by talking about a project upon which I’ve embarked, to kill two birds with one stone – move my core presence on the web (my homepage, my main personal blog, and various processes that run in the background) to a container-based setup, and learn more about containers.

My presence on the web is where it has been, at least virtually, for as long as I can remember – at pipetree.com. My old friend and colleague Former Member and I pooled our resources way back when and built & brought a server of our own round nearly 20 years ago to a colocation facility in Fulham, London. 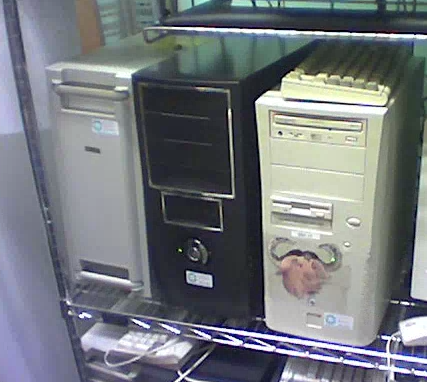 It ran GNU Linux (hence the sticker on the machine, to help identify it amongst the hundreds of others in the facility). I guess the concept of colocation is now outmoded, but I like to think of it in the “as-a-service” stack like this:

Since then we’ve moved out of the facility, I took over pipetree.com as a domain (Piers now has his own presence) and the server is now virtual, running at Linode. But the software has remained largely the same. A proper OS (i.e. Linux), various distributions, and various re-installs to try to maintain a clean environment.

And there’s the thing. It’s been a given that the install processes for software over the years, and my amateur hand in maintaining that installed software, makes for an untidy setup. Especially when it comes to experimenting with new services, with their myriad requirements and dependencies, not to mention their install tools (which have their own requirements and dependencies – it is indeed turtles all the way down).

So the heap of software installed on the pipetree.com VM is not clean and tidy; rather, it’s a bit of a mess. It’s effectively a production server, but I don’t really run it as if it were, certainly not in terms of knowing what’s going on. I’ve installed stuff, and then decided that what I’d installed was not what I’d wanted. I’d set something up but then realised I could have set it up differently, and have used various tools (sometimes through simple ignorance, sometimes through necessity) that have left a sticky, glistening snail trail of bits that make me slightly uncomfortable.

With the advent of the concept of containers, and particularly with Docker, that can all change. Instead of interleaving various software services on my VM (MySQL databases, a NodeJS-based blogging system, the Apache HTTP daemon, a Planet system, and so on), I can now look at these installations and services through a new, modern pair of spectacles that are not rose-tinted, but container-shaped.

I can run each service in its own container, and have an immediate and effective isolation, not only of runtime, but also of dependency. What’s more, I can run multiple instances of these services, and, from a web presence perspective, expose them through yet another service that’s nginx-based, in a reverse-proxy formation. It makes total sense, and allows me to feel calmer about what I’m installing on my host, because the install itself is not like a real install – it’s merely the instantiation of an image where the install process has already been completed, with the complexities of dependencies already resolved and everything set up as it should be. All I’m doing is bringing to life a container – an image – where the inner structure and workings are isolated and not leaking across to other parts of the host.

What I’m doing with Docker and these containers is installing small, single-purpose VMs on my general purpose VM.

But the best thing? It’s the cheap and fast nature of everything that’s going on here. While setting up, I can instantiate a Docker container from an image that has to be fetched* from the hub in a matter of seconds. On realising that I have set the container up incorrectly, or messed up the contents that would normally take a significant effort to fix, I can simply stop and destroy that container and do it again, in the safe and happy knowledge that I’m not leaving a snail trail behind me.

*I think I might use the term “fetch” instead of “download”, as suggesting a sort of horizontal action, rather than a vertical one, it makes much more sense in the cloud native world.

The ephemeral aspect of cloud native artifacts, such as containers, means that it is natural to create and destroy resources with almost reckless abandon. Well, perhaps not quite reckless. But it lets us see software and services, that we’re increasingly maintaining and running in the cloud, through our silent character terminals (or web-based UIs, if you’re that way inclined) as a different unit of measure, a different way to slice and manage what we’re building and deploying. We can stop caring as much about the load on our workstation, as there should be very little. Likewise, we can stop worrying as much about the installation process and the ramifications of getting the services on our VM where we want them to be. All we do is type characters on a modern green screen, and let the invisible, distant machines do the heavy lifting.

And that, to me, is a good thing. What do you think?