We started our analysis by using a Natural Language Query search to quickly get a sense of the films with the largest production cost. 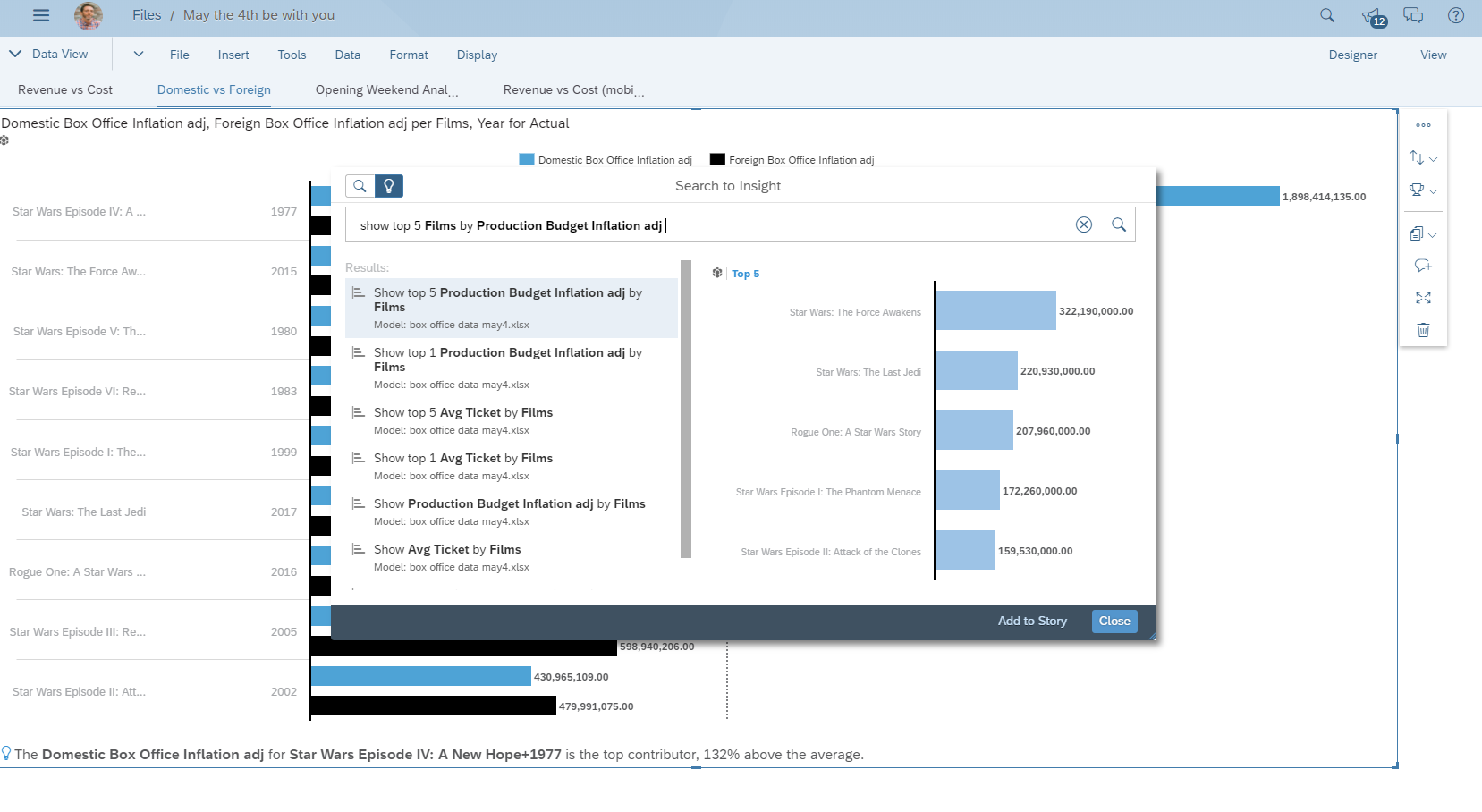 Revenue vs. Cost Adjusted for Inflation

Then we expanded the analysis on production costs and compared it to revenue. This visualization shows how much the Star Wars: The Force Awakens was a commercial success by placing it with the second-most revenue of all time. The first film, Star Wars: Episode IV – a New Hope, dominates over time with the inflation adjustment. And we can also clearly see how Star Wars: Episode II – Attack of the Clones and Star Wars: Episode III – Revenge of the Sith under-performed by comparison, with high costs and low revenue. 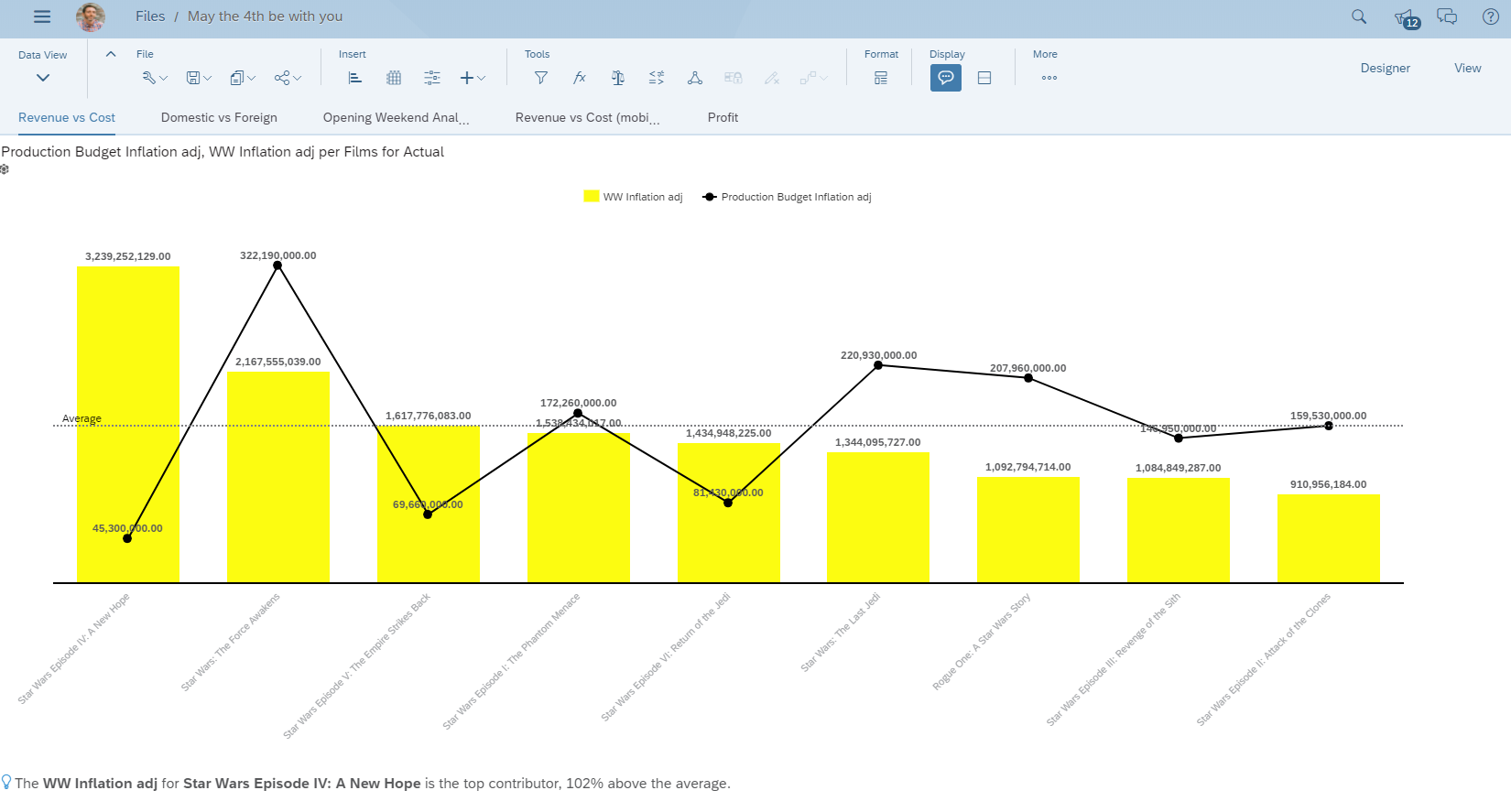 We then had a look at which films performed best by region. Star Wars Episodes I, II, and III grossed higher in foreign markets vs. domestic markets. The films released in the past few years also have a broader global appeal as evidenced by their larger foreign box office revenues. The films from the 70s and 80s had higher domestic revenue. 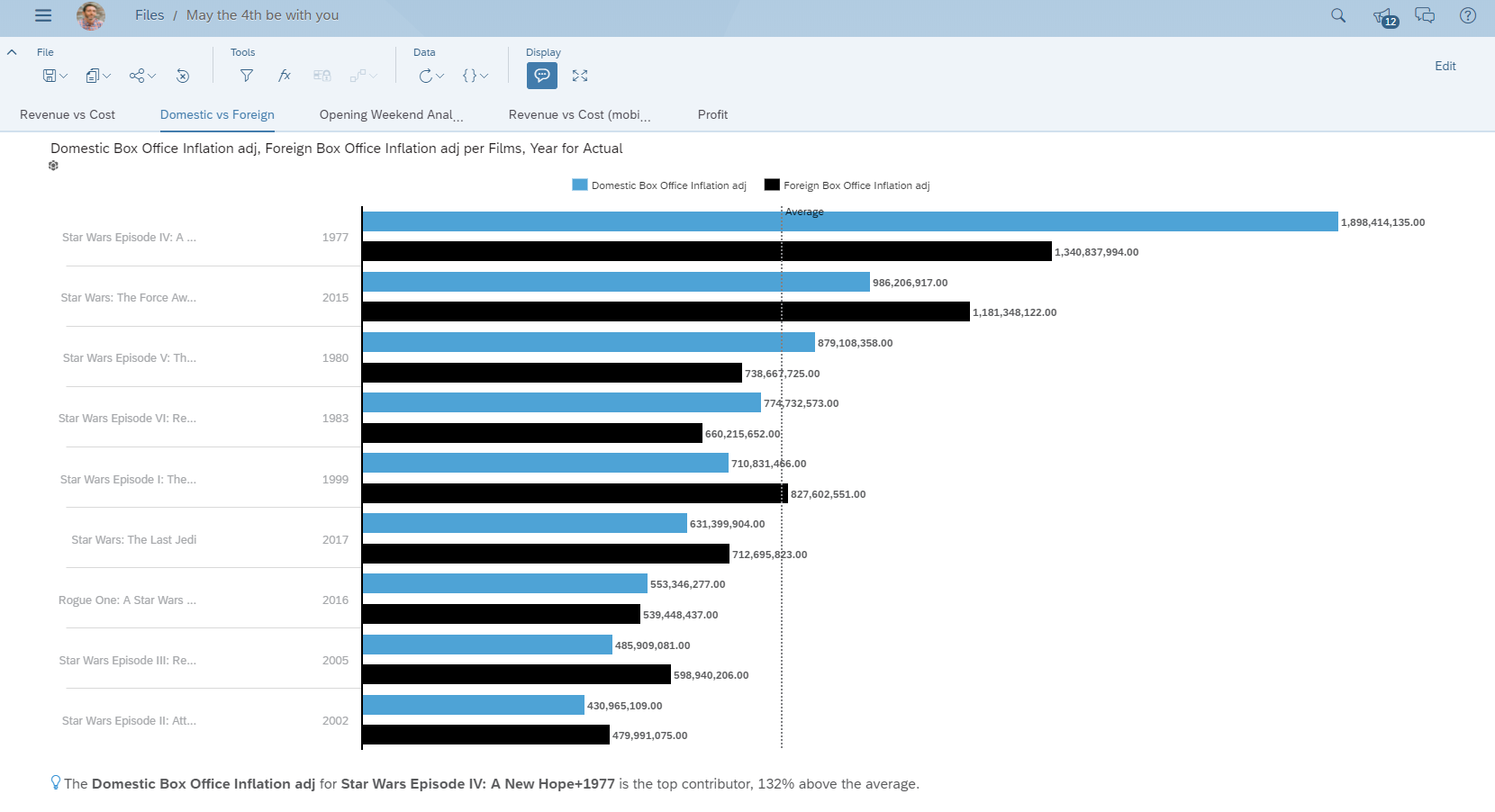 Without having to go into the Data View and manipulate our model, we were able to work out the profit of each film using the calculation feature in the SAP Analytics Cloud chart builder.  This shows us a comparison across each film and an at-a-glance view of profit margins. Most of the modern era films hovered in the 80-90% profitability with the profitability for Star Wars: Episode I – The Phantom Menace being the highest. 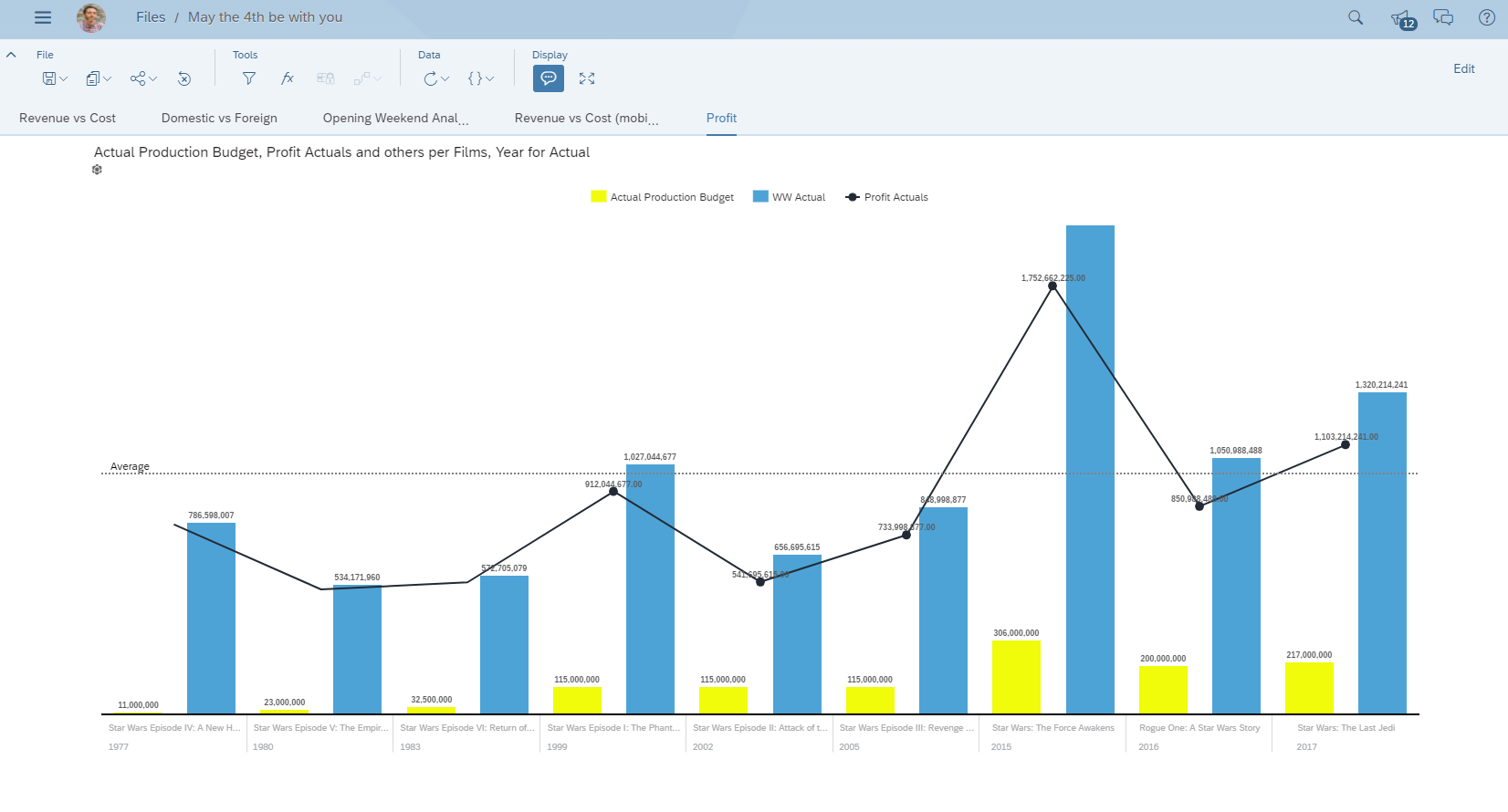 This view shows more people are watching films on opening weekend now than in the past, even while ticket prices are also increasing over time (visualized by the increase in bubble size). Interestingly, even if more people attend a film screening on the opening weekend, it doesn’t have a significant impact on the total number of people that will see the film in theatres. 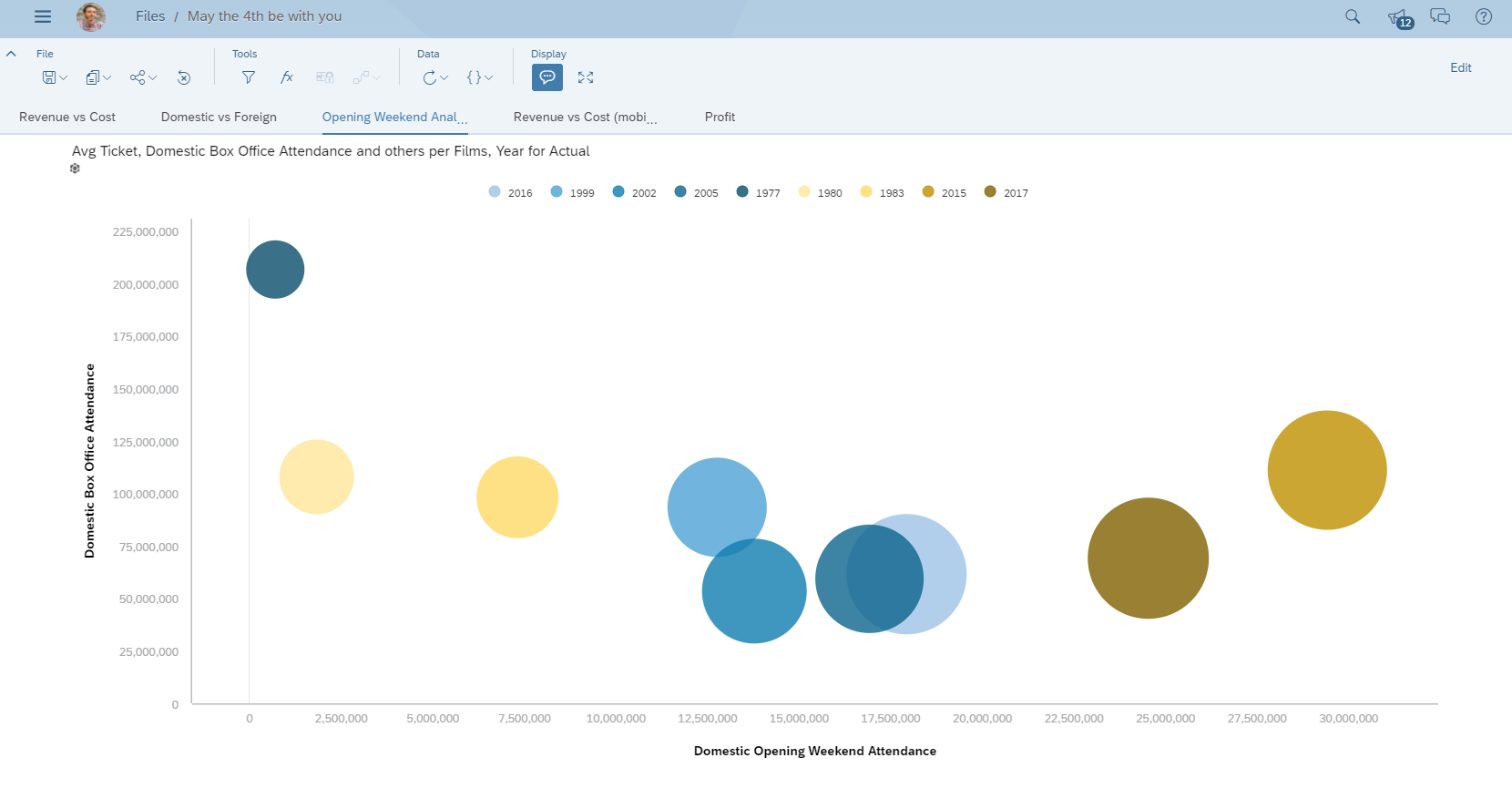 Mobile View of Revenue vs. Cost

Another nice feature of SAP Analytics Cloud enabled our story to include a responsive mobile view—handy for quick insights, yes, but even handier for sharing our film analysis with friends. 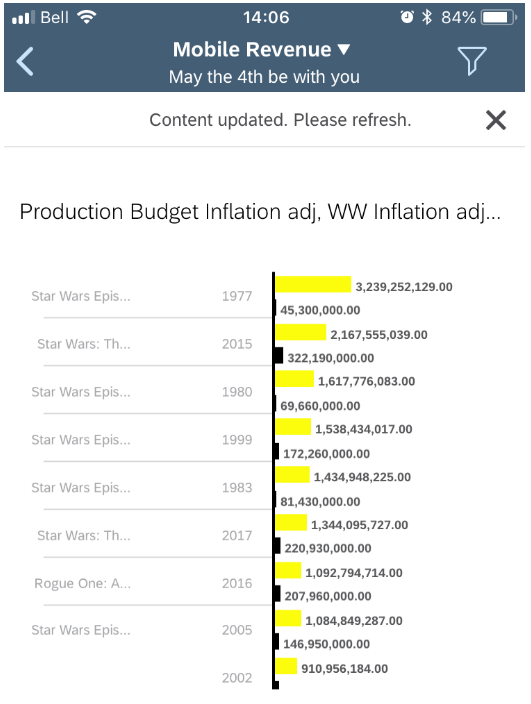 We were also easily able to adjust and prepare our data in the data view. SAP Analytics Cloud detects any issues with our data and assists with any data transformation we might need before starting our analysis.

#MayTheForceBeWithYou as You Uncover Insights

Clearly, we had a lot of fun celebrating International Star Wars day this year. This example gives only a sneak peak into what the SAP DataGenius team could do in just a few minutes using SAP Analytics Cloud.

Give the SAP Analytics Cloud Free Trial  a go and learn how to analyze data and uncover insights in your business.