Baseball is a sport rich in data and statistics, but despite this surplus of data, it’s extremely difficult to make sense of all of it and to truly understand what drives baseball success.  To kick off the 2018 baseball season, I thought that I test drive SAP Analytics Cloud to see if I could make sense of all of this data. 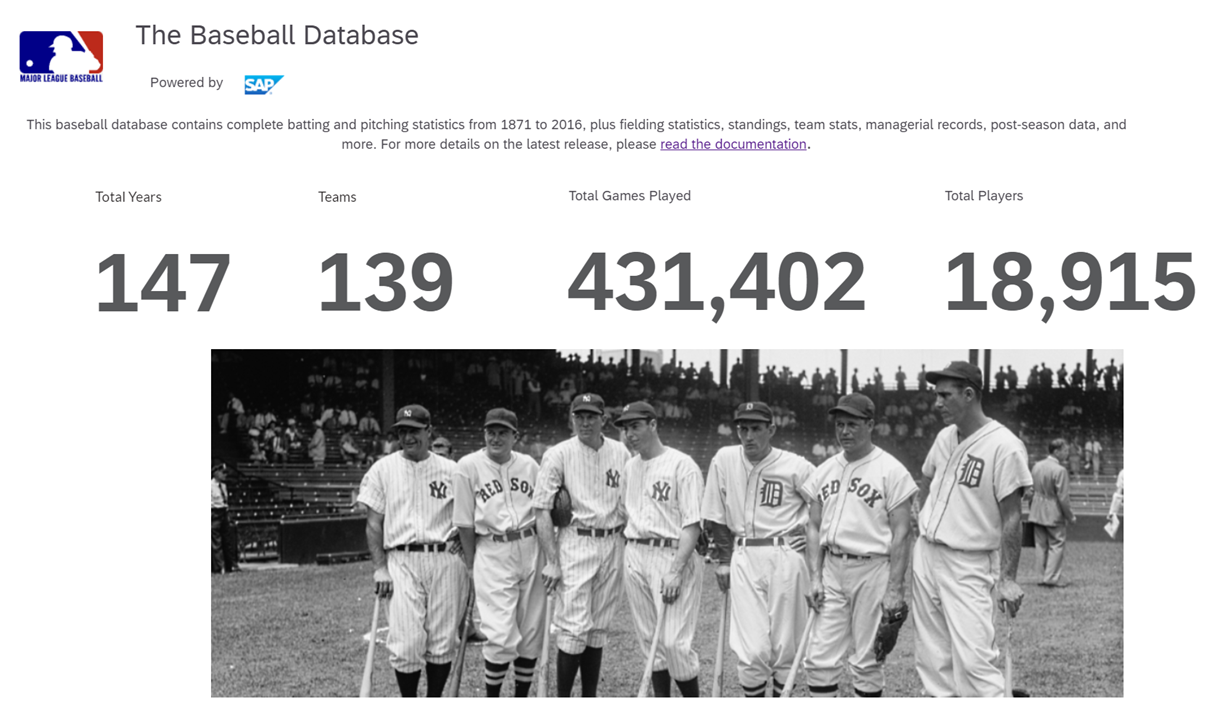 A full understanding of baseball data is often left to the “experts” for the following reasons:

Baseball has a Data Modeling Issue

While most wouldn’t view baseball as having a complex data model, it does indeed present many real-life data challenges that most organizations face. Sean’s data set provides 28 different tables that do not neatly “join” together. There’s a table for Teams with Teams, Years and Players. There’s also a Batter table with Teams, Years, and Players. This same table is then replicated for Pitching and Fielding – and again for the Post Season, All Star Games, Hall of Famers, yearly Award winners, etc. Each of these tables creates many-to-many relationships between them. (e.g. many teams span many years and many players, many players play for many teams across many years, many all stars games are played across many years with many teams and players that participate, and on and on.) Furthermore, the Batting, Pitching, Fielding, and Post Season tables all have very similar fields across the entire table, like Games, Player, Team, Hits, Walks, etc. where a pitcher (in the NL) can pitch, field, and hit.  Anyways, without getting too techie, modeling this data went from 28 original tables to 12 distinct tables with 3 main fact tables.

What Kind Of Questions Can We Answer With This Data?

If we look at all 147 years of baseball data, we can see all of the teams, franchises, and players that have come-and-gone.

If we drill down, we can quickly see that before the 20th century, game statistics were not always properly entered and the number of games played was not equal from season to season. It wasn’t until 1961 that baseball moved to a full 162 game season. And you can see a few dips in games due to strike shortened seasons (1981 and 1994), and during world war 1.

Which Team Wins the Most? Which Lose the Most?

This is not a straight forward question. For some, winning can be determined by most championships, it can mean most postseason appearance, it can mean most regular season wins, or it can mean the highest winning percentages (for those newer franchises like the Angels). So here’s all of these statistics in one view.

And then we can see the top 5 franchises by era.

While you can’t see if from this graphic, there are a few interesting nuggets in this data:

What Are “Winning” Teams Doing Better Than the Others?

One key offensive statistic used to gauge good hitters is OPS (On Base + Slugging). The idea is that the more often you get on base, the better the on-base percentage (OBP). And the more bases you get (e.g. a double is worth more than a single, a triple more than a double, and a homerun more than a triple), the better your slugging percentage (S). If you add together both of these statistics, you get OPS (On time + Slugging).

What’s interesting about this statistic is that over the past 147 years… (1) the teams that win the most score the most runs, (2) the most runs are scored by teams with a high OPS, and (3) a high OPS leads to more wins.

Is It Better To Have Good Pitchers or Good Hitters? 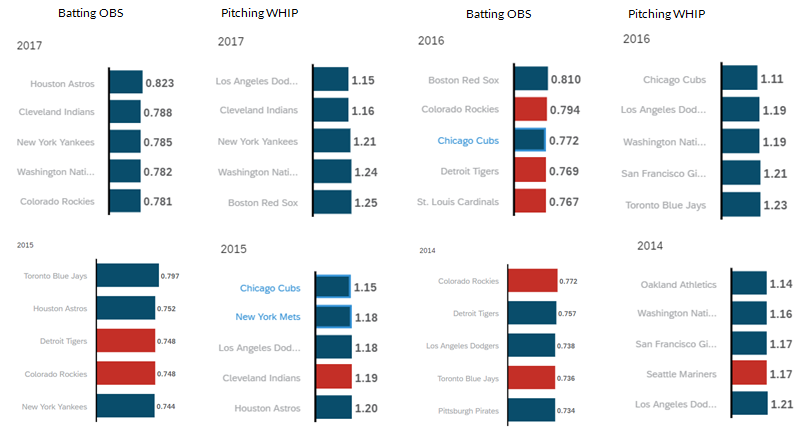 Who Are The Best OPS and WHIP Players?

If I’m going to try to recruit good hitters with a good OPS and pitchers with a good WHIP, who’s out there?  This is where the many-to-many joins come in. Teams have many players and play across many years and Players play for many teams across many years, and players play for multiple teams. If we look at the top hitters of all time, we can see that most are in the hall of fame – except the famous exceptions.  If we filter on players from the last 3 years that have had a minimum of 400 plate appearances, we can get a list of the following players – most of which are household names.

We can do the same exercise with pitching too. Based on pitching behavior, we can divide pitchers into “starters” and “relievers” based on whether they start games or not. If we filter for just the current era, we can get a list of pitchers with the lowest WHIP. RIP Jose Fernandez. 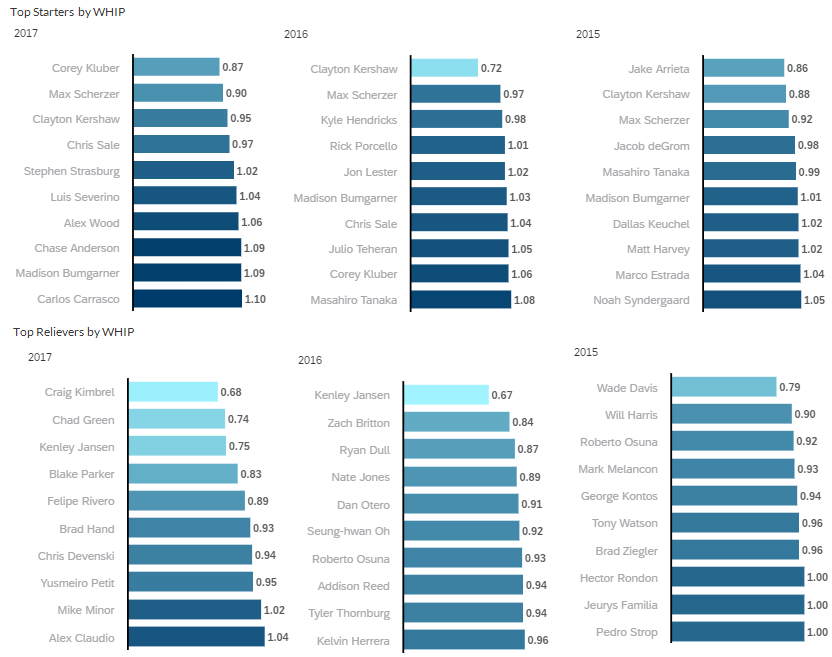 Do I Need to Spend to Win?

This is obvious stat, but winning teams have significantly higher payrolls than the losing teams. 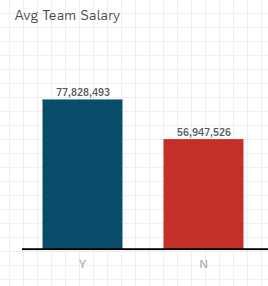 And there’s a correlation between winning and salary. That is, the higher the salary, the more likely you are to win. We can also see that there are some very high payroll teams that don’t win (bottom right in gray) and a few low payroll teams that win (top left in blue). So while it’s not impossible, the odds are stacked against you.  Some outliers include the Mariners (2001), Cubs (2016), Royals, and Yankees (1998) who had below average payrolls, but made the postseason. 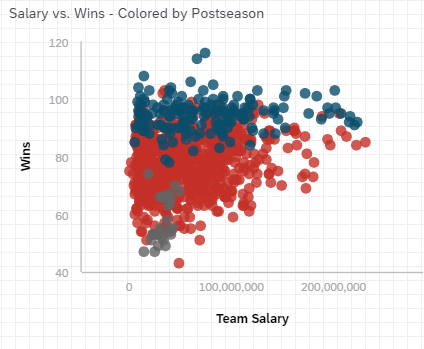 But what seems a little contradictory is that since 2000, only 37% of the division winners were in the top of their division for payroll.

Here’s a look at the Top 10 high salary teams and the fact that only half of them made the postseason. 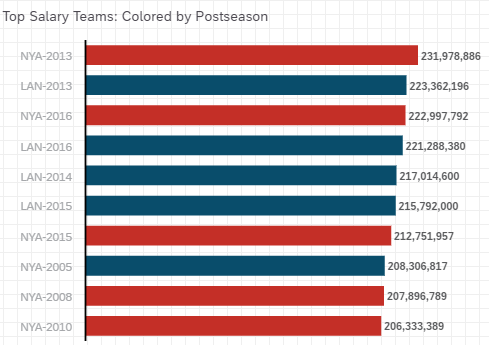 Which Players Have Teams Invested the Most In?

Here are are some staggering numbers on the top players in baseball. 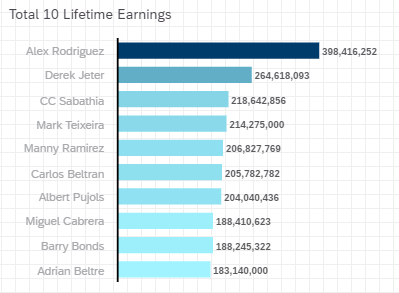 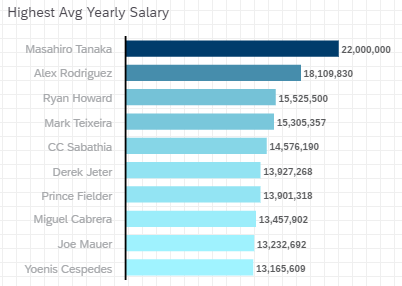 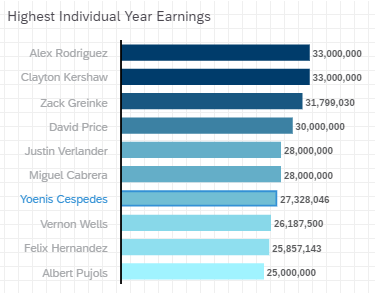 What does all of this mean?

While I was able to very easily ask and answer lots of questions in the data, my answers were not very eye-opening.  Here’s what I found:

Just like in your organization, data is everywhere.  However, the true analytics is very often left to too few.  This is another fun example of how analytics can be applied to help understand what drives baseball success.

Want a demo?  Use the comments below to get in touch and I’d be happy to share more details.

Excellent analysis ! That's a great example on how SAP analytics can deliver . Thanks Jason !