Being part of the SAP S/4HANA Enterprise Support Value Map team,, I often see confusion about the deployment options of SAP S/4HANA.

When you want to move to SAP S/4HANA, there are first two very important questions to answer:

Both questions need to be answered, and each one may influence the other.

In the first part of this blog, I will give some hints to help you understanding on a macro/bird’s or helicopter view, what are the deployment options of SAP S/4HANA.

This is voluntarily a simplified vision to provide clarification and an overall understanding of the differences between the deployment models. So I may use shortcuts for clarification purposes, although not fully exact on detailed level.

First, as usual, a bit of wording/branding is necessary:

Attention: SAP HEC is often confused with SAP Cloud Platform (often named/shorted as  SCP, or HCP ), sometimes even SAP HANA or even SAP S/4HANA, but none of these are the same at all.

Now, we are ready to list the four deployment options for SAP S/4HANA with the correct naming and branding.

As a first reminder, I wanted to highlight that all deployment options are split in only 2 different software “editions”:

So what are the main differences between the 4 deployment options? 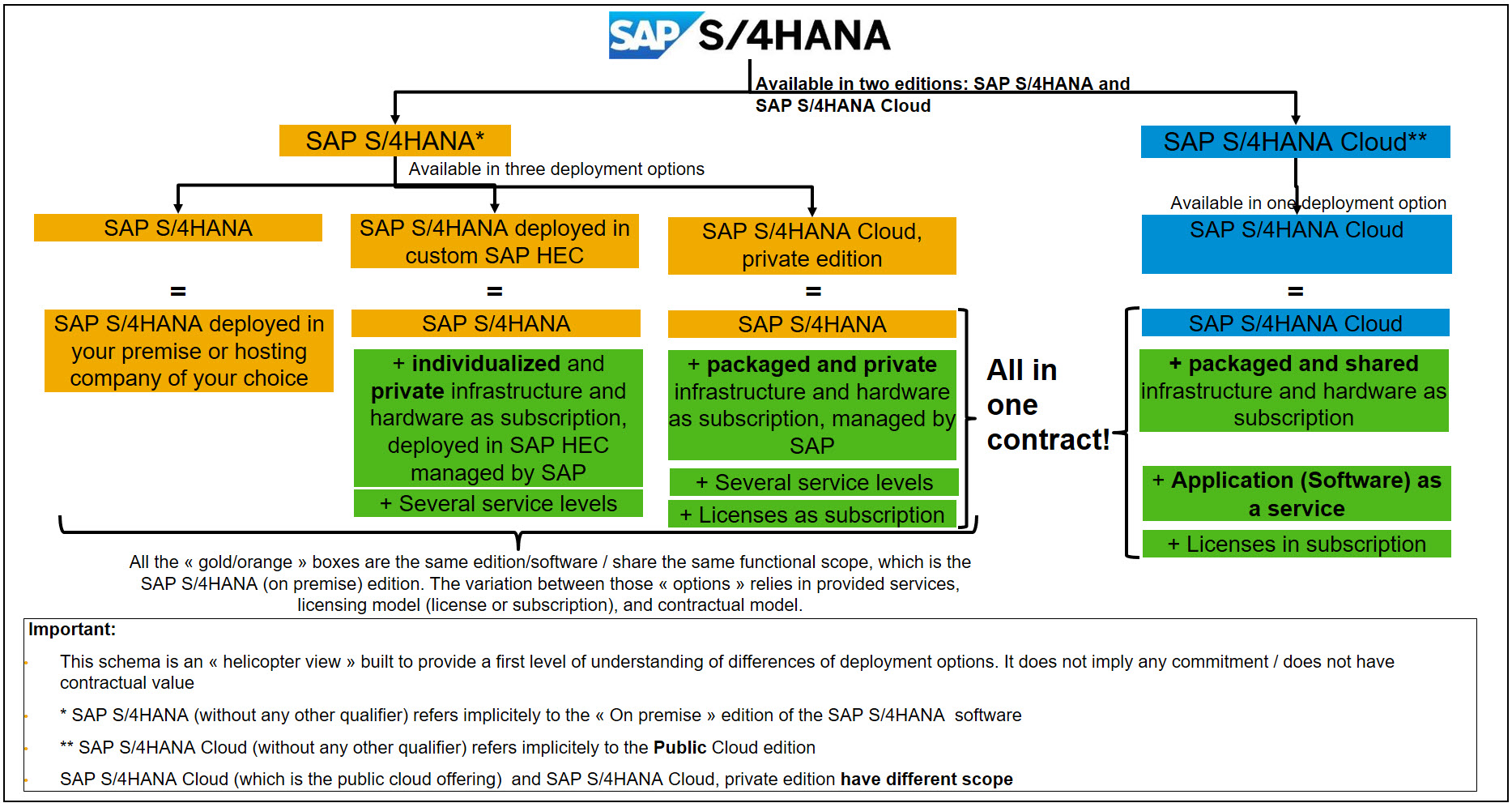 So what are the key takeaways of this first part?

This and much more you can learn with us on SAP Enterprise Support Value Maps.

* Valid S-User is required to enter the SAP Support Portal.

If not same, do you mind explaining what is the difference and where it fits in overall deployment model which you explained above.

Yes they are the same. The current correct naming, that you will find in the latest slide decks, is SAP S/4HANA Cloud, private edition.

You are right, within SAP HEC, you can currently Bring Your Own Licence (BYOL) , or subscribe. But in this last case, my understanding is that it is not an "all in one" bundle such as the Cloud private edition or Public Cloud.

Taking this opportunity to mention the names have now been changed in the following way:

One of the best blogs I have read recently and this does clear the terminology quite a bit. Keep up the great work.

I however have a different point of you. As we have two different software versions (S4H and S4HC) we should ideally have the following options for deployment

S/4HANA - can be deployed on-prem or hosted on cloud (AWS, Azure, IBM GCP, T-systems, HEC etc).  HEC is one of the many options that the customer can choose from.  For S/4HANA Cloud Single Tenant Edition the  customers uses the on-prem version of S/4 but manages it like a SaaS (limited customization, side by side extension - see the  5 rules blog and Sven Denecken's Activate Methodology blog below). The deployment for this option is currently HEC.SAP upgrades your S/4HANA  on an ongoing basis and keeps your evergreen.

S/4HANA Cloud Multi Tenant Edition is similar to Ariba and Successfactors. This is a true SaaS offering.

yours it's really an enlightening blog!

I've a question for you... Since SAP S/4HANA Cloud Single Tenant Edition (S4HCSTE) is actually a S/4HANA on-premise' edition of the SAP S/4HANA software, I'm curious on how SAP can restrict on the S4HCSTE the modification to the standards, etc.: is this achieved with specific roles assigned to the customer? Or there are special settings in the on the S4HCSTE that prevent the customer to perform some modification?
I'm asking this because, in case a customer starts with the on the S4HCSTE and later on decides to ‘switch’ to the SAP S/4HANA edition (on-premise or on HEC), I'm wondering how this can be achieved.

Per my current understanding SAP is offering 3 options as of today:

Where is S4HCPO (Cloud Private Option)? HEC agreement site still says about CPO along with STE which confuses me. Can I say S4HCPO is an offering which lies between S4HC-STE & S4H-HEC? If yes then how it is different from STE?

Moreover please review this as well.

Mukul Sharma . My blog is getting a bit old and I clearly need to find some time to update it.

Where is S4HCPO (Cloud Private Option)? HEC agreement site still says about CPO along with STE which confuses me. Can I say S4HCPO is an offering which lies between S4HC-STE & S4H-HEC? NO, CPO is SAP S/4HANA running in SAP HEC. I'll recheck with some SAP HEC colleagues. If yes then how it is different from STE? since answer is no, I believe you do not need this part to be answered, correct?

Thanks Renaud for replying!

I also checked with one of my SAP HEC friend, he also mentioned that S4H CPO is nothing S/4HANA HEC (private cloud managed by SAP). If that is correct then I am good. If you get time please review the comparison and comment in case of any changes required.