Take a look at this small gallery web app, do you think that it’s written entirely in UI5? The correct answer is “yes”, but with the help of Semantic UI and the UI5 JSX renderer.

This blog is meant to be a fast teaser for my presentation at Inside Track: Timisoara. We’ll take a glance over some useful JSX techniques for building custom controls that I’ve used throughout the development of the gallery app.

JSX is a syntax extension for JavaScript popularised by ReactJS. The power of JSX comes from the fact that it can be mixed with regular JavaScript expressions. In order to work, it needs to be compiled (or “transpiled”) back into normal JavaScript using, for example, BabelJS.

Is compiled into the following JavaScript code:

For embedding expressions inside JSX, we just have to surround the JS expressions with curly brackets. This nesting of JavaScript and JSX can be done recursively to virtually any level.

A while back, I wrote a small BabelJS plugin for compiling JSX into UI5 render manager calls. It allows you to write something like this:

And then compiles it into something along the lines of this:

Notice that it is incredibly hard to understand what we are actually rendering when looking at the compiled code? Even if you would write it by hand and introduce some helper methods, it would be ugly to behold and difficult to grasp.

So now that we have the very basic concept of what we can do with JSX, let’s look at some easy examples from the gallery app. In the following snippets, I will omit auto-generated IDs for brevity and consider that the oC variable contains the custom control. We will look at the JSX code and the rendered output at runtime.

One of the most basic of all JSX techniques: simply adding some “dynamic” text into some static HTML. Through “dynamic”, I mean taken from the custom control’s properties or from some variable in general.

(the control has a string property title with the value "Title")

This one is also fairly simple: it allows you to conditionally render a sub-tree of the DOM. It is based on the way in which the logical operators work in JavaScript with non-boolean values.

This can be easily used when you either have an array property or you obtain an array somehow (e.g. using a split) and you want to render a DOM subtree for each array element.

When you have multi-cardinality aggregations, you will inevitably want to render each child control in a loop:

(the control has an aggregation right containing three child controls)

This is fairly useful when you dynamically add a class based on the value of a property (or some other condition). This could be used to achieve an effect similar to the standard ToolbarDesign mechanism.

(the control has a string property icon)

Whenever your control can be in two different states that differ by merely the presence of a CSS class, you can do the following:

(the control has a boolean property active)

If you want to see more fleshed-out examples like the following control: 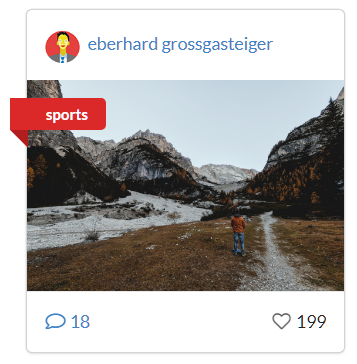 Then you can check out these two repositories on GitHub: