On 10th of April 2018, SAP Security Patch Day saw the release of 10 Security Notes. Additionally, there were 2 updates to previously released security notes.

SAP Product Security Response team would like to bring it to notice that SAP’s product, SAP Business Client is integrated with Chromium, an open source rendering engine of Google Chrome web browser. The security note 2622660, released on April Patch day is to update our customers on the vulnerabilities that SAP Business Client inherits from third party web browsers like Google Chromium. The vulnerabilities listed in the security note are found in components delivered by Google. For more information on updates released by Google, please refer here – Chrome 63, Chrome 64, Chrome 65.

List of security notes released on the April Patch Day: 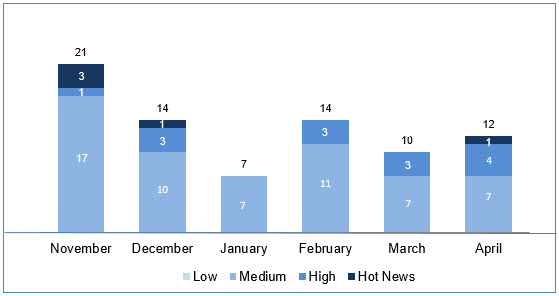 Customers who would like to take a look at all Security Notes that are published or updated after the previous Patch Day, see: https://support.sap.com/securitynotes -> All Security Notes -> Filter for notes which have been published after 13th March 2018.

Instead of using https://support.sap.com/securitynotes to retrieve the complete list of new or changed Security Notes since the previous Patch Day you can use https://support.sap.com/notes -> „Expert Search“ instead. Here you can choose a date range for „Released On (Free)“ = „Range starting 1 day after previous Patch Day" together with a filter for „Document Type“ = „SAP Security Note“.

I don't mean no disrespect but why is this posted as an SCN blog? There is no personal narrative or story of any kind...

If some SAP customers are having trouble locating these security notes in the Support Portal then an effort should be made to improve that tool instead of offering a blog as some kind of "communication crutch". Actually I'm not sure how anyone could possibly miss it in the Launchpad - the tile is right there on the default home screen.

In the short term, the duplication of Support Portal seems unnecessary as this information is already available there (and a great search tip from Frank Buchholz ). And in the long term, I'm having trouble seeing a value of this information beyond next month.

If posting this as a blog, maybe at least add some story. Something like this:

As soon as I poured the first cup of coffee in the morning, the manager showed up at my desk. "Hey, Aditi, what's happening?" he inquired, taking a sip from a large cup. "Listen, we are going to need you to go ahead and come in on Saturday" he continued, without waiting for an answer. "Another hacker wannabe discovered some security hole. By the way, don't forget about the new cover sheet for the TPS reports". I had to squeeze my red stapler very hard as he turned around and left. "This is such a great company to work for", I thought.

blogs on the background story of the vulnerability would be worth reading. You could really add the drama of how the person investigating got to the root cause and take it from there

My point exactly. This subject should lend itself easily to storytelling. And it's much more interesting what is behind the scenes of such notes.