I’m using the SAP Web IDE for a while now. Although every customer has his own SAP Web IDE account, the projects in my personal trial account kept growing. I’m using my trial Web IDE account for proof of concepts on different technology domains like UI5, mobile, IoT…

Over the years the number of projects have been growing and after some time it was almost not manageable anymore. Even on the Web IDE accounts of customers, I started facing the same problem as the amount of Fiori apps were growing. An example of my trial Web IDE (watch the scrollbar):

I started thinking on how to solve this issue. One of my ideas was creating subfolders. Another thought I had was using workspaces. In the past, you had a folder on top, called “Workspace” but it was not possible to change this nor create multiple workspace folders. Having the ability to create workspaces and switch between these workspaces would solve my problem, like you can do in Eclipse:

I raised this question to someone of the SAP Web IDE team and I got the feedback that it wasn’t possible BUT I could raise this as an idea on the idea place. So that I did: https://influence.sap.com/sap/ino/#/idea/144094/

I’m happy to see that SAP made the idea become reality. Since the last update you can manage your workspaces in the SAP Web IDE. 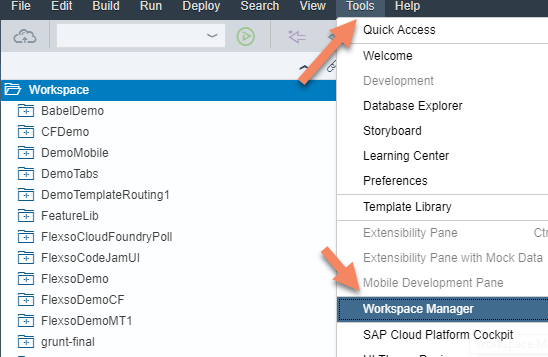 And here it is, the Workspace Manager 🙂:

Here you have the option to switch between workspaces or open them in a new window. It’s also possible to create new workspaces and/or delete them.

I really need a clean workspace so I’m going to create a new one with the “Create Workspace” button and give it a name. 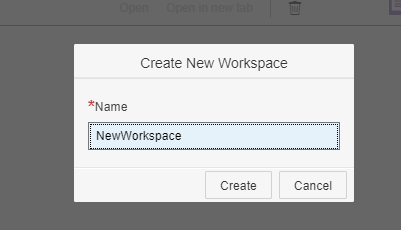 Now, I have two workspaces:

Finally, I have an empty workspace that I can use and where organize my projects better?

Just as a side note, in the right upper corner or in the root folder, you can see which workspace that you’re working in:

I’m happy that SAP implemented this idea. If you have your own idea, create it on the idea place and maybe it will be implemented one day!

Hope you enjoy the workspaces.

Great. That was a much needed feature. Great to see user ideas being listened to and implemented by SAP.

Very nice. Thanks for the update. This is how SAP Web IDE will become better day by day

Nice one... Improving the WebIDE is a must for SAP. As I'm using it not that much over the time I see this one as a step in the right direction.

Is it still there, that you should use chrome?

You can use every browser, but Chrome is the preferred one 🙂  Are there any other "good" browsers ? 🙂

I assume this Tools> Workspace Manager feature is there in SAP Web IDE Full stack edition !

Yes - only in the Full stack editiion.

The other one is not the focus anymore.

This feature was really needed and it works exactly like Eclipse workspaces.

You might have a different combination of settings and plugins activated in each workspace.

However, switching from one to other requires a new browser tab to be opened.

Personally, I believe it would be better to implement working sets instead of workspaces in order to organize projects. We wouldn't need to open a different browser tab and all projects would be in the same page.

Can you guys let me know what is the difference between full stack web IDE and a regular one?

How to get the projects from regular to full stack IDE, is that copy and paste or any other way to import.

full stack has more focus on full stack development and so it has Cloud Foundry integration, Java IDE and much more.

The regular one has more focus on fiori development, less full stack possibilities.

You can use export import or git. But their is also a migration process ongoing. I think it's still in beta but will be available when the full stack will be officially replacing the regular one.

very nice feature. One question though, is it possible, or will it be possible, to move an item/project from one workspace to another?

I don't know, that depends on the SAP Web IDE team and their priorities. I hope so 🙂

Copy/move projects between workspaces is in our plans.

We will update the forum once it's available.

This is certainly a useful construct.

What is SAP’s advice regarding use of “Workspace Manager” with remote Git repositories?

The convention is to have a 1:1 relationship between each app project and remote GIT repository e.g. GitHub. If multiple projects are organised in a Workspace hierarchy, would SAP recommend use of a single remote repository at Workspace folder level, to host multiple app projects ?

Can anyone help? Same question by me...