In one of the previous blogs, we’ve already learned the basics about implementing write operations like CREATE and UPDATE.
In the present blog, which is also part of the series for beginners, we’re going to discuss one more interesting detail:

An UPDATE operation can be sent to an address that doesn’t exist… this is a new feature in V4, it is called UPSERT and worth a little wow.

ohhhhhh, I couldn’t hear anything…;-(

Note:
the UPSERT is new and in addition, it is supported by the SAP Cloud Platform SDK for service development !!!.

Can I NOW have a loud wow?

Thanks, THAT was good 😉

So here it is, may I introduce you to:

Yes, a funny name…
Nothing to get upset about…
Funny advice…

It is a merge of UPDATE and INSERT

(which is UPDATE and CREATE)

Now the serious explanation.
In case of UPSERT, we can safely quote the spec, because there are 2 lines which are short and easy to understand:

An upsert occurs when the client sends an update request to a valid URL that identifies a single entity that does not exist.
In this case the service MUST handle the request as a create entity request or fail the request altogether.

The spec for UPSERT can be found here:
http://docs.oasis-open.org/odata/odata/v4.0/errata03/os/complete/part1-protocol/odata-v4.0-errata03-os-part1-protocol-complete.html#_Toc453752301

Until now, the explanation was about how the OData service should behave.

However, for the user of the OData service, the following is also interesting:

A PUT or PATCH request MUST NOT be treated as an update if an If-None-Match header is specified with a value of “*”.

This means, the user doesn’t just send a request to any non-existing URL.
The user moreover must specify the required header.

the user sends an UPDATE request (PUT or PATCH) which points to a single resource.
This resource is specified by its key field in the URL
e.g. People(2)

the user sends an UPDATE request which points to a single resource.
This resource is specified by its key field in the URL
However, this resource doesn’t exist.
Furthermore, the user specifies a header field to express that he is intentionally sending a request to a resource which doesn’t exist
If these 2 requirements are met, then the UPDATE turns to an UPSERT.

We’ve been talking about what the user of our service should do.
Now that our user knows how to do an UPSERT, he will definitely do it.
At least, because of the funny name.

I mean, now we have to implement the UPSERT.

What do we have to do?

First of all, we have to realize that the FWK helps us.

(As usual, worth another wow)

About the FWK:
The FWK identifies, if the request is an UPSERT, or just a normal UPDATE.

If the If-None-Match header is there and has value *, then it is an UPSERT.
Then the FWK invokes our @Read implementation for the specified key

Why the FWK calls the READ?

Because it has to identify if the specified entry already exists.
Remember: UPSERT means that the user sends an UPDATE request to a single resource which doesn’t exist

Note that this is a prerequisite: @Read has to be implemented – and it is important that the READ is correctly implemented.
Of course, it is always important to implement everything correctly.
But here the whole UPSERT functionality depends as well on the correct @Read implementation

First case:
If the READ is successful and finds that resource
Then the UPSERT fails.
It is correct to fail, because the user want to do an UPSERT (indicated by the header) which means he wants to create that resource to which he’s pointing in the URL
As such, if it already exists, the creation has to fail, so the UPSERT is aborted with an error message.
That is handled by the FWK which gives an appropriate error message:
“Upsert failed as the entity already exists.”

I’ve said “continue with UPSERT”, but this doesn’t mean that now the UPDATE method is called.
No, no, no.
In our situation, we want to do a CREATE
As such, the FWK calls our @Create method after the (erroneous) READ

This means that UPSERT is only possible, if the @Create is implemented.
This is another prerequisite

And that’s the end of the UPSERT story:
the @Create method creates the desired entity.

Note:
The user sends a PATCH or PUT request and our @Create method takes care of handling the request.
This implies the following: the request body needs to contain all the properties that are required for a correct CREATE
This might be different from what we learned in a previous blog about PATCH, where the user is encouraged to omit properties from the request body.
However, in case of UPSERT, the user should send all properties (at least those which are required for successful CREATE)

Note:
Have you noticed? We’re in the CODE section, but there’s no code snippet.
Yes, that’s correct: no code required.
For UPSERT, we don’t need additional code, only the prerequisites mentioned above must be fulfilled.

BTW:
For UPSERT, it is not mandatory that @Update implementation exists.

Note:
here’s a note which I wouldn’t want to place prominently:
I’ve mentioned that the @Read must be implemented properly and a correct error response must be sent if the entry is not found.
There’s a little bit more FWK-intelligence here: if the @Read implementation returns a success response, but the data is passed as null, or if the setData() is not set at all, then the FWK interprets that as “not found” and implicitly sets the status code 404. And as such, in that case the UPSERT will still work.

As usual, you can find the full source code at the end of this page.
However, as you’ve learned, there’s nothing to do, no special requirement. It just contains the basic code for READ, CREATE, UPDATE. As such, to test this, you can as well just use the existing project which we were using for blog 3

I’ve mentioned that the READ implementation has to be correct.
Let’s point out 2 aspects, where the UPSERT would fail, if the READ isn’t properly realized:

The READ is successful, which means it has found that resource. Expected would be that NO UPSERT is done.
Now, what if your READ implementation returns success response but implementation is not correct
If you forgot to specify setData() in your READ implementation, then you don’t return the found entity along with your success response
In that case, the framework doesn’t have a valid entry.
As such, the FWK thinks that the entry is not found.
As a consequence, the FWK proceeds with the UPSERT
But this isn’t correct, because that entry in fact does exist.

The READ returns an error response.
However, the error response is configured with a status code as 400
Reason for such (wrong) implementation could be some generic check in the READ method.
For example, you could think of checking if the key field is higher than the complete size of all People
Why not, for a READ this could make sense
And you could think of setting the status code to 400, why not, it is a bad request.
HOWEVER, the framework WANTS a status code as 404, which means NOT FOUND
And only if the READ returns a 404 , only then the framework continues with the UPSERT

Note:
See the end of this page for some secret note

Below screenshot shows how to do an UPSERT operation.

We know that the URL http://<yourHost>/<yourproject>/odata/v4/DemoService/People(99) doesn’t exist, because we’ve just deployed our sample service with only 4 entries
We specify the HTTP verb PATCH, but it can be PUT as well
We specify a valid request body, i.e. some new Person data which should be created
We specify the header: If-None-Match with value * 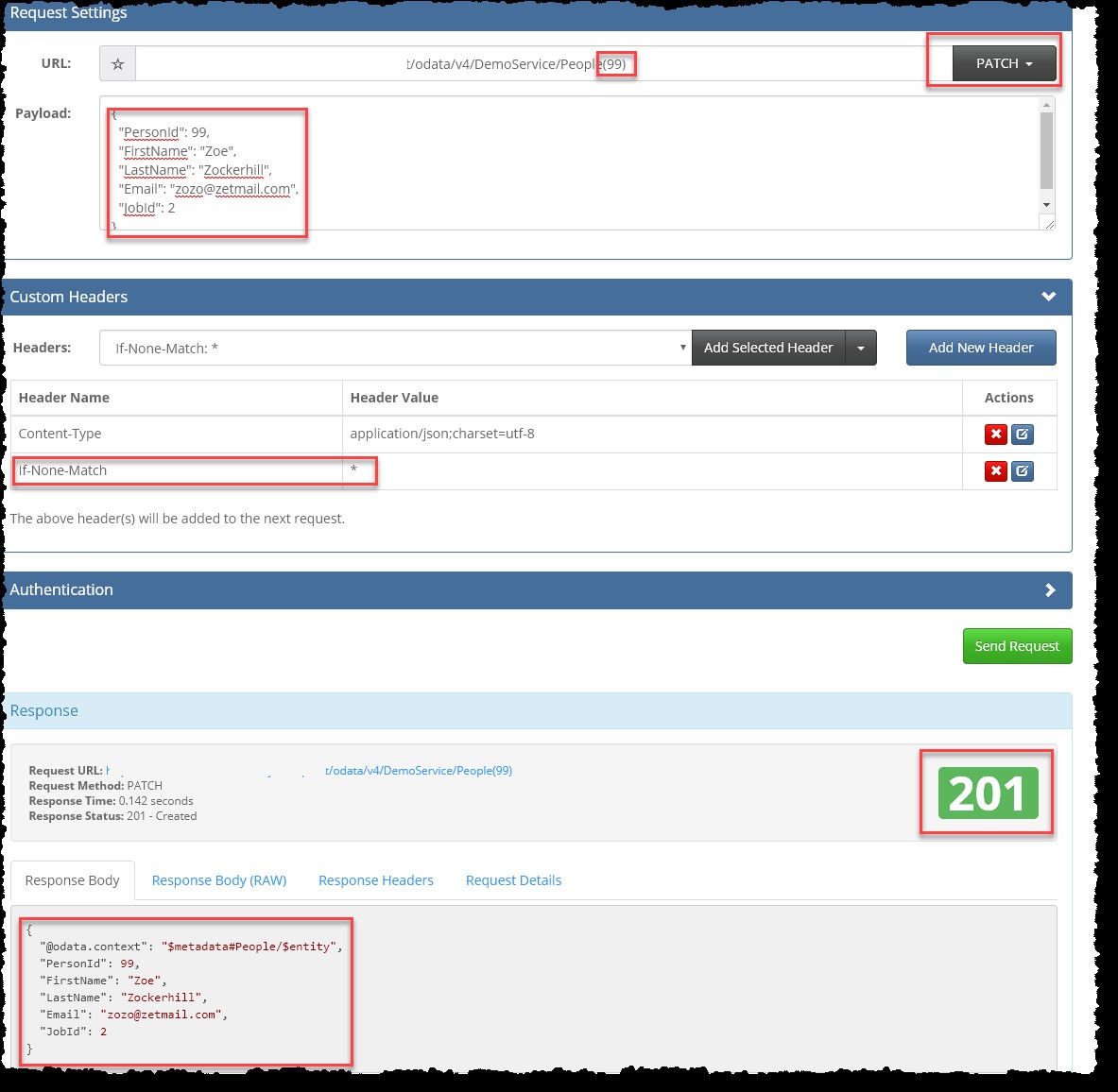 After going through this blog, you’ve learned the new OData V4 feature called UPSERT.
And you’ve also understood how it is treated by the framework and what the service developer is expected to do, in order to support this feature.
And you know how the user of the OData service can trigger an UPSERT

Note:
As I promised, here’s a secret note.
This note is a bit longer than others so it requires a separate section.
However, this section is not official, so I’m telling in brackets, please keep it as secret.
Opening bracket:
[
Currently, we have a limitation: as mentioned, in order to achieve an UPSERT, the user has to send all required properties in the request body.

But what if he doesn’t do that?

The background is:
The user sends the UPDATE request and indicates a resource which doesn’t exist. The key property value is in the URL. So the user can omit it in from the request body.
It could as well happen, that the key value in URI and in request body are different (due to laxness on user-side)
We as service developers can react and retrieve the key property value from the URL instead of request body

In this example, we should create a Person with PersonId=123

We are talking about the @Create implementation, which should work for both CREATE and UPSERT operations
So, in the code we would need to distinguish between normal CREATE and UPSERT.
In case of normal CREATE, we take the key property value from request body
In case of UPSERT, we take it from the URI
So we would need to do 2 tasks:
Check if we’re invoked for CREATE or UPSERT
In case of UPSERT, retrieve the key property value from URI
As mentioned, this is not official, so in case of questions you can only contact me directly.
Closing bracket:
]