At TechEd 2017, I attended a presentation on DX113, presented by Matt Borges . In particular, it was clear to me that there are quite SAP Mobile offline capabilities and limitations that users are not aware of and I’d like to highlight them here.

Before we get into the details of design considerations lets first lets discuss about the Architecture and features of SMP/CPms and Mobile SDK for offline. 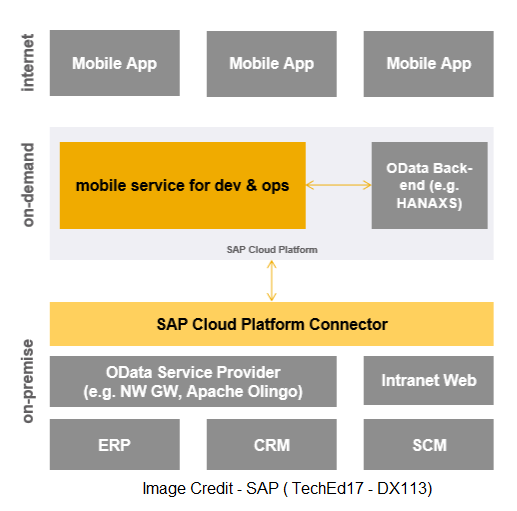 SAP is now mainly focusing on CPms rather than On-Premise version of SMP.

SMP On-Premise version will go end of maintenance in 2020.

Challenges customer are facing today with on premise setup.

With CPms all above challenges are addressed and customer can focus on app development rather than worrying about infrastructure needs.

Below picture shows the features of SAP Cloud Platform. 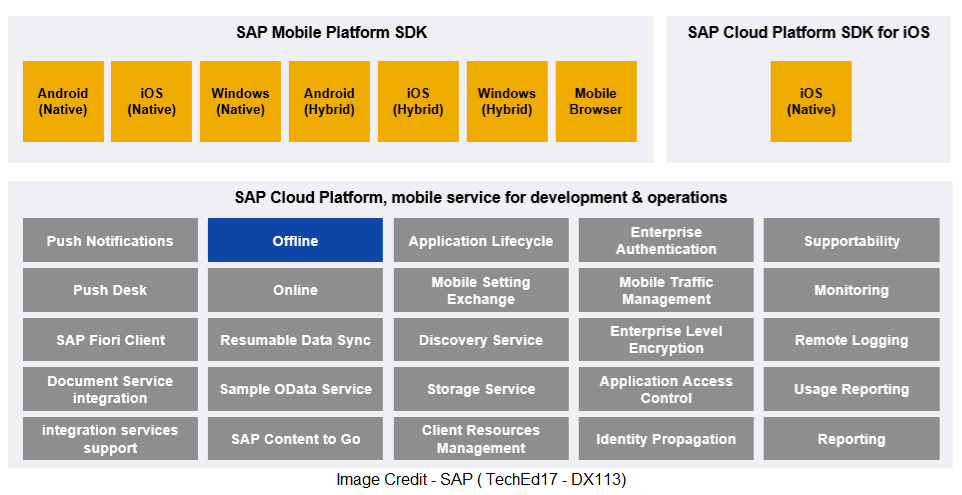 Offline store in mobile is created looking at the oData model and metadata , all the tables (keys and relationship) in offline store are created from metadata.

Its very important to understand the sequence for synchronization first the upload need to performed then download , if done vice versa  user changes in offline can get lost.

It is important to understand what happens when data is created and updated in offline store. During Uploads( flush method in SDK) the operations in the request queue are sent to the server. New records which are created with local IDs are resolved with real IDs.

Records which failed to execute in backend for some reason, offline store keep track of error information and puts affected entities into the error state, user can query the errors from error archive to show the reason for the failed records.

Upload is the frequent activity so users can upload information several times in day.

Download activity is not frequent , it is required during the start of the day or couple of times depending on scenario. Delta plays very important role during download of information which i have highlighted below and various mechanism to implement delta.

Several offline stores can be created depending on scenarios.

Defining request is which tell what should entities should participate in synchronization during download.

The data which is changed should only be downloaded and sync to mobile.

Delta can be implemented in backend by Syclo Exchange Framework or by Gateway.

There are two places where deltas come into play:

To maximize performance, the OData delta protocol SHOULD be implemented by the OData backend to ensure only the changes are sent to the SMP/CPms server.

By default, if no OData deltas are provided by the OData backend, SMP/CPms will compute the delta to be sent to the client.

It calculates deltas at modification time, wherein the ABAP system tracks relevant changes, as they occur. At request time, the deltas are already prepared, making them available. Though this approach needs higher development efforts, however, it’s more scalable and ensures an optimized overall performance.

In this type of approach, the system compares old and new states to check which records have been modified/deleted. Here, though the implementation effort is small, it however does not optimize the backend performance. This implies, if you have more records in the full collection, the response time of the request tends to get longer.
However, with both the approaches, the payload of the response is minimized, though the first approach seems to be more prudent, as it ensures optimization of the backend performance.

Using batch in offline store is extremely important , it reduces the number of roundtrips between the end-user and the SAP NetWeaver Gateway server. As a result, network time is reduced.

It helps to reduce CPU time of server in case of update calls with single atomic unit of work.

Always consider to use batch calls against the single call to improve performance of server and mobile client.

Its very important to understand use of Shared data , if same data needed to be downloaded for group of client should be made as shared.

Shared defining queries are cached in the SMP/CPms server so that all clients can retrieve the shared data from the cache instead of all going to the backend.

$expand is only supported for ODataV4 ( NOT OData V2) but implementation can get very complex.

For server-driven paging; specify the page size (using a Prefer odata.maxpagesize header or store option) and the SDK will return a next link if there is more data

Creating and updating records with relational entities in offline store

When working with parent/child objects in the offline data store,  updates which is  performed are done against the “__metadata/uri” field of the object.

Repeatable requests is a feature that OData servers can support to prevent the same operation (for example, a POST) from being executed more than once.

Repeatable requests is important for all OData backends, but in particular for those used with Offline OData.

New features which were demonstrated in TechEd Session

With the new version two databases are created Entity store and Request queue, this is helpful when any schema changes are done.

Mobilink protocol is used for communication between SMP/CPms and mobile.

Entity store contains defining requests and if delta is enabled,  delta link information from response of entities so that mobile can use delta queries to optimize download. It stores backend data which ultralite DB. 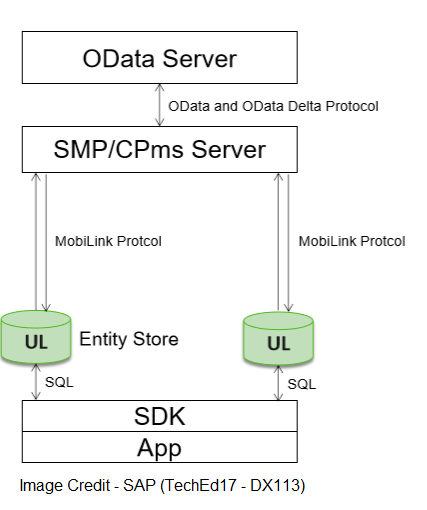 Picture besides is picked up from TechEd session and shows the high level details about offline store.

Schema changes are done frequently even after the roll out, user have to upload the data to get the new updates but it is not possible with several 1000 devices in the field .

This is new update i learned from SAP TechEd where schema changes does not impact offline store as long as OData standard are followed.

Changes are automatically updated to offline store without recreating it.

Operations in the request queue that had not been uploaded to the backend should not be affected by the schema change.

Often there is need to store local data when offline , cool feature was added to SDK to create new entities while offline and entities can be modified and read.

Rather than assign arbitrary key values (or rely on values that could be changed), generate a unique entity ID for newly created entities and use that ID in the edit/read link returned in responses until the real ID/keys become available

Rather than construct URLs from key properties (which may not exist or could be changed), simply use the URLs that are returned

Below is the JSON Example to demonstrate how to use it.

Using etags helps to handle conflict when several users are modifying the same records. Etags uses timestamps to compare the server data with client data to determine the conflict. There are weak and strong etags can be implemented depending on usecase.

Data related error returns response as 200 which is considered successful by mobile client and removes it from request queue , backend need mechanism either manually fix the data and logical error in the backend  or IDOC’s to reprocess the errors.

There are several uses to do Conflict Resolution on server ( who wins when two user update same record ) and users on server has ability to decide and overide the changes.

I'm trying to implement a Windows Application that connect to HCPMs to download data from OData backend and to store this data on offline database (mobilink sync). I'm using SMP SDK for Windows 3.16.3
I have 2 different scenarios:
- UWP App: all works well, I can import necessary package from the SDK
- Desktop (WPF) application: I can't import the SAP.Data.OData.Offline.Store dll, then I can interact only in online mode

The Offline capabilities in SDK for Windows are compatible with desktop application?

I will request Matt Borges  to reply on this.