In this post, I will discuss the architecture of building a virtual data model (VDM) in S/4 HANA, using CDS Views (Core Data Services).

With the availability of the SAP HANA platform there has been a paradigm shift in the way business applications are developed at SAP. The rule-of-thumb is: Do as much as you can in the database to get the best performance.

To take advantage of SAP HANA for application development, SAP introduced a new data modeling infrastructure known as core data services. With CDS, data models are defined and consumed on the database rather than on the application server. CDS also offers capabilities beyond the traditional data modeling tools, including support for conceptual modeling and relationship definitions, built-in functions, and extensions

Technically, CDS is an enhancement of SQL which provides a Data Definition Language (DDL) for defining semantically rich database tables/views (CDS entities) and user-defined types in the database. Some of the enhancements are:

Supported natively in both ABAP and SAP HANA, the data models are expressed in data definition language (DDL) and are defined as CDS views, which can be used in ABAP programs via Open SQL statements to enable access to the database. CDS provides a range of advantages for businesses and developers, including:

Before HANA, querying large datasets in an ERP system could be time consuming, and degrade overall performance. Data Warehouses were used to create persisted data models using advanced modelling techniques to improve query performance. SAP HANA removes the performance issue in ERP out of the equation, allowing us to create Virtual Data Models (VDM) directly in ERP with incredible performance.

What is a VDM? A combination of semantically enriched CDS views that logically combine data from source ERP tables to create meaningful datasets that can be readily consumed in frontend tools

As the slide suggests, at a high level, the VDM consists of CDS Views reading data from tables in the DB, which are then read by other CDS views, without any persistency, happening in real time.

Annotations help qualify the CDS Views, and provides semantics and meaning to fields within a CDS View

Below are a few of the key annotations that define entire CDS Views specific to VDMs:

Because I’m also a BW developer, I’ve taken some of the most important annotations for VDMs and compared them to BW objects:

Now that we’ve seen the main CDS View annotations, we’ll look at a more detailed architecture of the VDM: 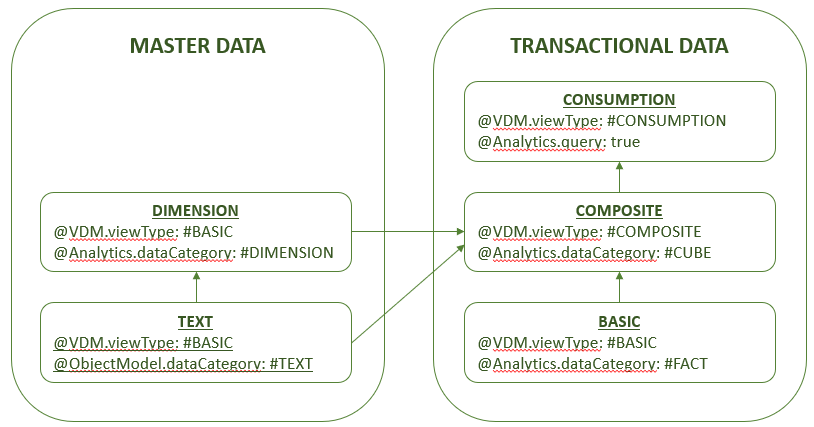 Notice how the concepts are similar to that of a BW environment. We have texts and dimension CDS Views. We can build these once and re-utilize them across any number of transactional CDS views.

Below are more details regarding each of the CDS Views mentioned above:

Notice how we haven’t applied any semantics (Annotations) to the fields in the select list, since this is the BASIC view, and we’re creating the FACT of our model. Semantic annotations will be applied at the composite view.

Also note that a virtual data model can be comprised of multiple BASIC/FACT views depending on requirements.

One of the main advantages of the VDM is that you build it once, and it can be consumed in a multitude of front end tools:

In addition to that, because the CDS View exists on the application layer, we can leverage the existing ABAP security model through PFCG. For CDS View security we use an artifact called the Data Control Language (DCL). For more information on DCL, please refer to my blog below:

Once you learn how to model using CDS Views, the time to develop a VDM can be very fast, translating to delivering quick and efficient reporting solutions to customers.

Regarding performance, the VDM is amazing for high volume high aggregation scenarios. I built a model at a client on Purchase Orders, going from the header down to the schedule line, with many master data joins. The schedule line table had about 250 Million records, across 8 years of data at the time.

When running a summarized report with no filters, with 3 measures on the columns and just the year on the drill down (8 rows, 3 columns, 24 data points), the report returned in 1-2 seconds!!!

Now, using the same data model above, when I ran a very detailed report, going down to the schedule line item, bringing many different attributes, with about 30 rows in the drilldown, for an entire month, that report took 10 minutes to run. Why? Because it was doing all the joins and calculations I had defined in the model in real time, and was very process intensive.

The scenario above would be a great candidate for a persisted solution in BW, where the ETL has taken care of any calculations and data joins. The data is persisted in an ADSO and when a report is run, it is simply selecting the data based on the criteria, without the need of any additional processing, with the expectation of performance in the sub second region.

As always - the answer is "It Depends". Just getting into CDS myself.

As consultants, it ALWAYS depends, and that is actually a true statement 🙂

Hi Berger - Do you have information where I can get list of VDM's Functional are wise delivered by SAP ?.. I couldn't find that in help.sap.com

I wonder, is it possible to use a CDS as a basis for BW characteristics, similar to the "HANA View" access type?