SAP is following “Cloud first” approach for its innovations and simplifications. What is means? How is it differentiating from on-premise solutions? I hope my first blog below on this forum will answer such questions.

Let’s compare the S/4HANA Cloud with S/4HANA On Premise on various parameters:

1. Governance of the product:

S/4HANA Cloud application is fully managed by SAP, i.e. the backend system is lying with SAP and customer/partner have access to mainly the cloud based fiori interface to execute various business processes. Customer can just procure subscription based license for usage of S/4HANA cloud version.

Whereas S/4HANA On Premise can be managed by customer/partner also. Both SAP GUI and SAP Fiori are available to execute various business processes.

S/4HANA Cloud has two options from SAP for deployment:
– Public Cloud option: where SAP has restricted the system modifications and recommended to follow the SAP best practices.
– Private Cloud option: where the flexibility is similar to S/4HANA on-premise version, but system being managed by SAP on cloud.

In comparison, S/4HANA on-premise can be hosted on cloud instead of hosting on customer’s premise. The hosting cloud can be – public cloud or private cloud.

Also SAP is assuring that the backend code line is same for both on-premise and cloud version of S/4HANA.

SAP is following a quarterly release cycle for S/4HANA Cloud. In each year there will be four versions released in the month of February, May, Aug, and Nov. So for this year the latest release is 1802 (i.e. February release of 2018) and upcoming versions are 1805, 1808, 1811 and so-on.

S/4HANA on-premise version is having yearly major release last being 1709 (in September, 2017) and the next one planned in 1809 (September, 2018). During the year, SAP also release the 2 FPS (Functional Pack Stacks) which are nothing but for down-porting the simplifications from cloud version to on-premise version.

Now the important fact to notice is that for S/4HANA cloud, client has to adopt quarterly innovations as and when release by SAP. There is no option to skip a cloud quarterly release. This also enables the client to always utilize the latest and greatest innovations. The particular version has just the lifecycle of three months, e.g. see the below product availability matrix dates for 1802 version:

For S/4HANA on-premise version, there is no mandatory adoption need. Client can skip the version in between, e.g. client who has implemented 1511 version can go directly to 1709 without first implementation 1610 version. However please note that each S/4HANA on-premise version has lifecycle of 5 years from the end of the year in which version is released, e.g. see the below product availability matrix dates for 1709 version: 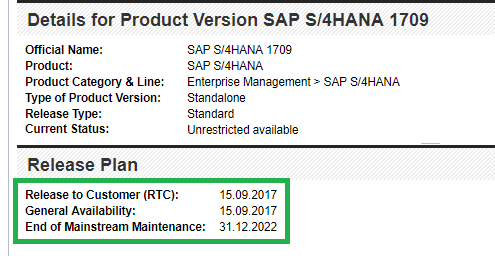 As innovations are first coming on cloud version, so you will be seeing various intuitive fiori applications which are not yet down-ported to on-premise version. Please refer the below link to find relevant fiori applications for your processes:
https://fioriappslibrary.hana.ondemand.com/sap/fix/externalViewer/

Regarding best practices also, the innovations gets integrated in cloud scripts first. Refer the below link to get the latest list of best practices: https://rapid.sap.com/bp/

Organizations and consultant are used to do various configurations in SAP world using IMG guide in SPRO. This has been continued in S/4HANA on-premise version.

For S/4HANA cloud, SAP is offering the test automation tool on cloud environment and integrate into customer deployment. There is no extra fee for this tool and it is covered in S/4HANA cloud subscription fees. It provides standard processes test scenarios and plans out of box, which can be modified to customer’s own need and also provide option to build own test plans. This tool manages the whole execute process, stores the results for audit/ verification purpose, do robust error handling etc.

Test automation tool is quite critical in S/4HANA cloud version, as the innovation cycle is quarterly and customer has to mandatory adopt the changes. There is short window to test and automation helps to cover more processes in that short test cycle for each quarter.

S/4HANA Cloud supports only data migration cockpit inbuilt in cloud environment. It provides various templates which user can fill and then upload via “Manage your data” section in solutioning.

S/4HANA on-premise allows various other ways also like BAPI, RFC, IDocs, exits etc. like it used to be in ECC environment.

SAP activate methodology is covering both the versions and supports various SAP Activate phases – Discover, Prepare, Explore, Realize, Deploy and Run.
Refer site link https://go.support.sap.com/roadmapviewer/ to see the details of SAP Activate phases, deliverables and tasks for each of the version.

However, note that right now there is no approach for converting a client from on-premise to cloud version and vice versa. Only option is to follow a greenfield approach in this case.

However, for S/4HANA cloud there are limited systems available:
– Discovery system during discovery phase
– Starter System which is made available during prepare phase and goes off during realization phase.
– Quality and production systems are provisioned in realize phase and ultimately stays in client environment. Any changes on on-going basis are first made in quality system and then moves to production system.

I hope from above you would be able to appreciate the differences between S/4HANA cloud an S/4HANA on-premise version and can better plan your S/4HANA journey. SAP S/4HANA cloud is growing at 350% YoY and thus in future we will be seeing many customers shifting to S/4HANA cloud. Stay connected and follow me for more blogs in future related to S/4HANA.

Nice article with concise but complete information. It was really helpful for me to clear certain doubts I had on this topic.

Thanks for sharing this article. I would appreciate if you can share a few more details on private cloud deployment of SAP S/4HANA Cloud. How is it different from the on-premise option

For other readers, there’s an excellent course on openSAP.com that gives a detailed understanding of S/4HANA cloud which is worth looking at.

Also checkout my other blog explaining