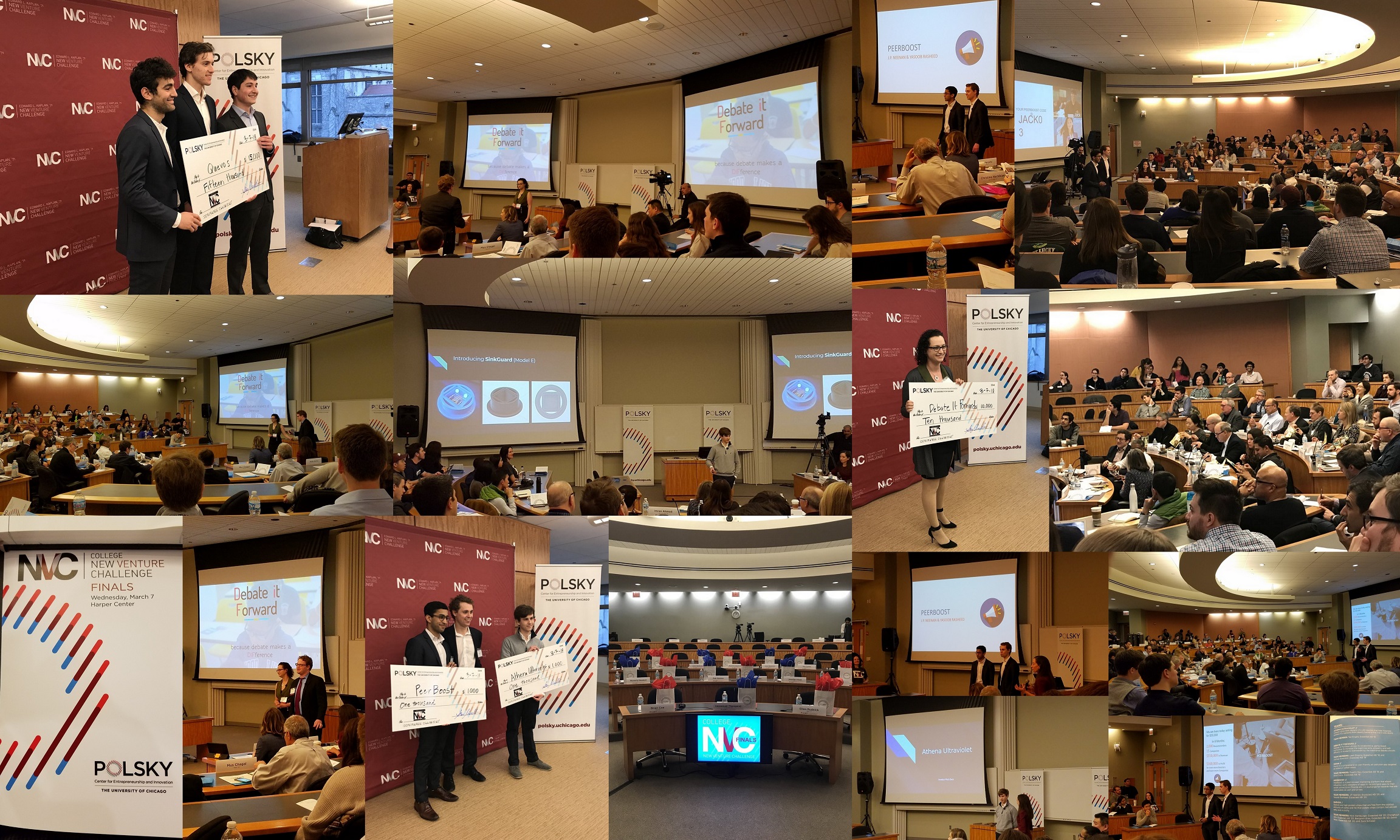 On Wednesday March 7th, I had the privilege to represent SAP at the College New Venture Challenge held at The University of Chicago. I was very impressed with the professional presentations and innovative ideas shared during the day, many of them aligned with UN Sustainable Development Goals as you can see below.

The Polsky Center for Entrepreneurship and Innovation at the University of Chicago sponsors the College New Venture Challenge (CNVC). The CNVC is the undergraduate track of the University’s business launch program, the Edward L. Kaplan, ’71, New Venture Challenge (NVC). The NVC is the University of Chicago’s nationally ranked accelerator program that has graduated more than 180 startup companies still in operation today. This year was the first time in the CNVC’s history that the program was held as a for-credit class for undergraduates. Finalists presented in front of an esteemed panel of distinguished judges.

Finalist ($1,000): PeerBoost, a peer-to-peer marketing platform that allows influential, early-adopters of mobile applications to recommend applications to their social connections in exchange for rewards that are redeemable as cash and prizes. Team members include JP Neenan, Expected AB ’20; and Yasoob Rasheed, Expected AB ’20.

About the Polsky Center for Entrepreneurship and Innovation
The Polsky Center for Entrepreneurship and Innovation drives venture creation and technology commercialization within the University of Chicago and the surrounding community. Through education, partnerships, and new venture support, the Polsky Center advances the knowledge and practice of entrepreneurship and accelerates the commercialization of research. Among its offerings is the top-ranked accelerator program, the Edward L. Kaplan, ’71, New Venture Challenge, which is where companies like GrubHub and Braintree got their start. Since 1996, the New Venture Challenge has helped launch more than 180 companies worldwide that have gone on to achieve more than $5 billion in mergers and exits and raised over $575 million in funding. The Polsky Center helps students, faculty, staff, alumni, researchers and local entrepreneurs navigate the complex process of creating and growing a startup. Its resources include a 34,000 square-foot, multi-disciplinary co-working space called the Polsky Exchange; a multi-million dollar Innovation Fund that invests in early-stage ventures; and a state-of-the-art Fabrication Lab for prototyping new products. By leveraging the University’s distinctive strengths in research and a combined research budget of more than $1.5 billion from its three affiliates—Argonne National Laboratory, Fermilab and the Marine Biological Laboratory—the Polsky Center paves the way for more ideas to have a meaningful impact on society.