Did It Get Better? A tech coming-of-age story at #LWTSummit 2018 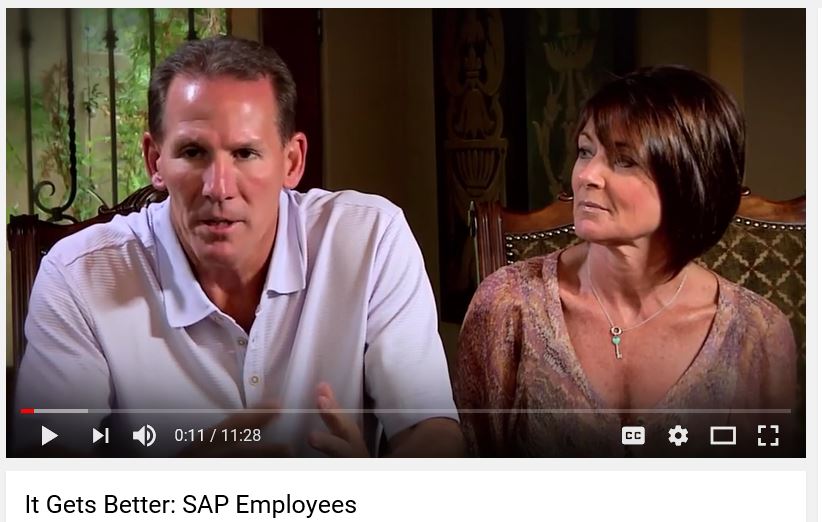 Back in 2012 SAP joined tens-of-thousands of others in telling the world, particularly struggling LGBT youth, that It Gets Better. In the six years since then I’ve asked myself nearly every day what technology’s role is in making that “better.” The tech world saw first-hand how its platforms were being abused. We saw when a troll was being hurtful and how cyberbullying led to loss of life and potential for the world. Did we not have an inkling of weaponization of bots and trolls and how mass-scale pedaling of fake news would influence the very fabric of our democratic society?

The truth is that tech has fallen squarely behind on the promise of making it better, particularly for our most vulnerable and for our society.

At the Lesbians Who Tech Summit in San Francisco last week, both fallout from that failure and hopeful ways forward were on display. Facebook COO Sheryl Sandberg, in conversation with Recode’s Kara Swisher, lamented that Facebook is playing catch-up, for example with tamping down gigantic ad buys from masked foreign entities: “We are taking this very seriously. We are definitely playing catch-up. Things happened in the last election on our platform that we were not prepared for.”

That’s far from just Facebook’s problem and for that, each of us as technologists need to look in the mirror at our roles in training the machine. Nowhere was that theme underscored as clearly as in the numerous talks about the potential of artificial intelligence and its machine learning cousin at the Summit.

Ana Arriola, Director of Product Design for Applied Machine Learning & AI Research at Facebook, gave a stand-out talk on The Radical Futures of AI, a Juxtaposition of Possible Futures of Artificial Intelligence. According to Ana, among the “benevolent uses of AI” that Facebook is exploring include being able to determine a suicidal intent in a post, or to use AI to ensure we never mis-gender or be harmful to anyone online. 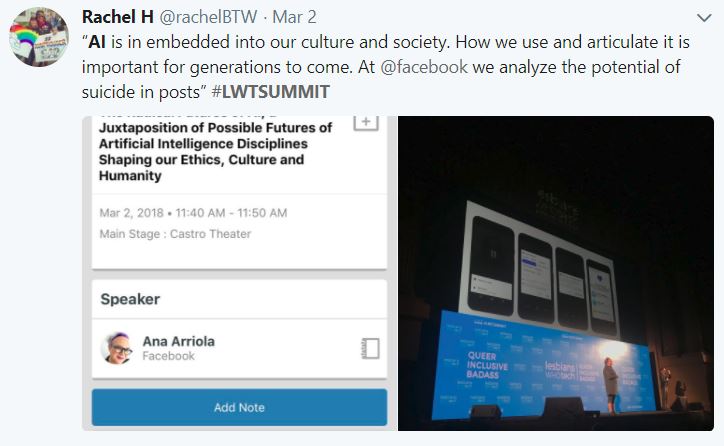 Aubrey Blanche from Atlassian underscored the in-the-moment potential of AI and machine learning in saying that we need to interrupt biases and gendered words in job descriptions, citing technology such as http://text.io, which echoes SAP’s own Business Beyond Bias. 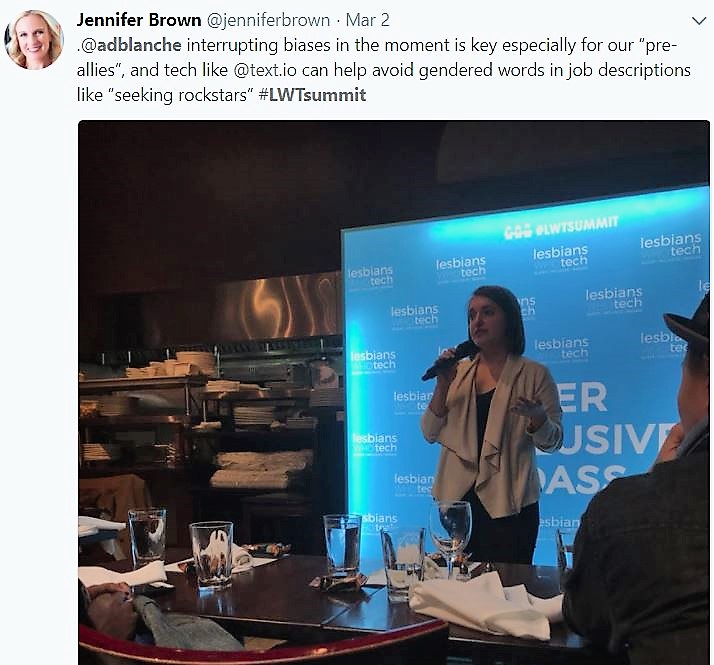 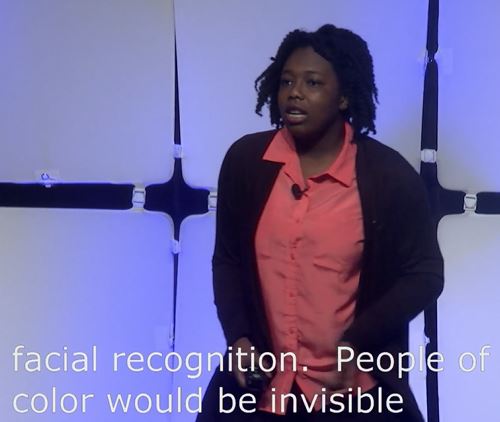 In other talks, the growing pains of AI were made very clear. Camille Eddy at Stanford gave a brilliant talk on the cultural bias that sneaks into AI.  Joannie Fu of Intel, in talking about Intel’s free AI academy, stated “AI is inevitable. We need to embrace it so that we can influence it.” Liz Howard from Enki reminded us that we need to “teach” right from wrong in AI, just like we teach our children. And who doesn’t remember the debacle of Microsoft’s Tay chatbot?

If the machine can help us use technology to interrupt, in the moment, the accidental or purposeful intent to hurt others, our society —  ourselves – who will teach the machine? Who will influence the growing pains of AI, ML, and other emerging and potentially life- (and society-)saving technologies? 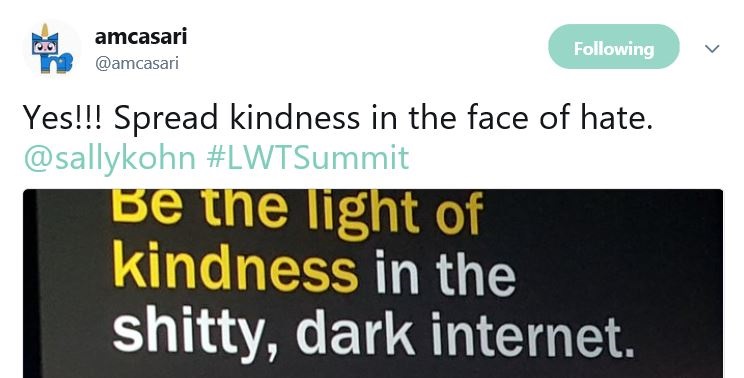 The machine is going to come of age with or without us. In Arriola’s brilliant talk, she concluded with a call for us all to show up in this learning experience: “The future of AI and machine learning must be queer and inclusive.” 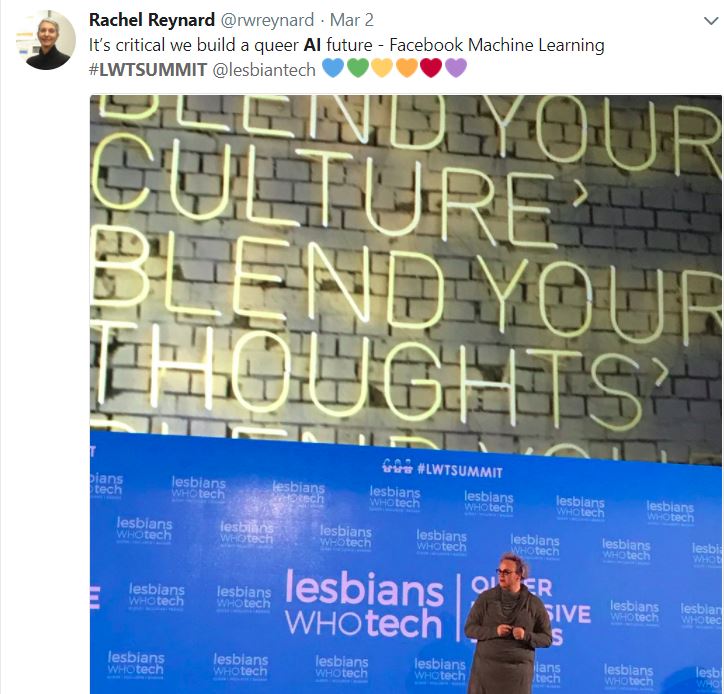 We’ve got the technology. And we’ve got all kinds of tech amazingness in the Lesbians Who Tech community. Among trailblazers, on hand at the 2018 Summit we had lesbians powering missiles for national defense and pioneers planning lesbian colonies on Mars (jk:)). Even if it IS rocket science to make tech and our collective future better, we’ve got this – but only if we come to the table.

Join in to make good on this promise.

PS: It you want to get started today, SAP has a developer platform with all the goods.  Go to https://cloudplatform.sap.com to try it out for free. Step through Robin van het Hof‘s tutorial to build your first machine learning iOS app.

it was THIS GREAT to be there: 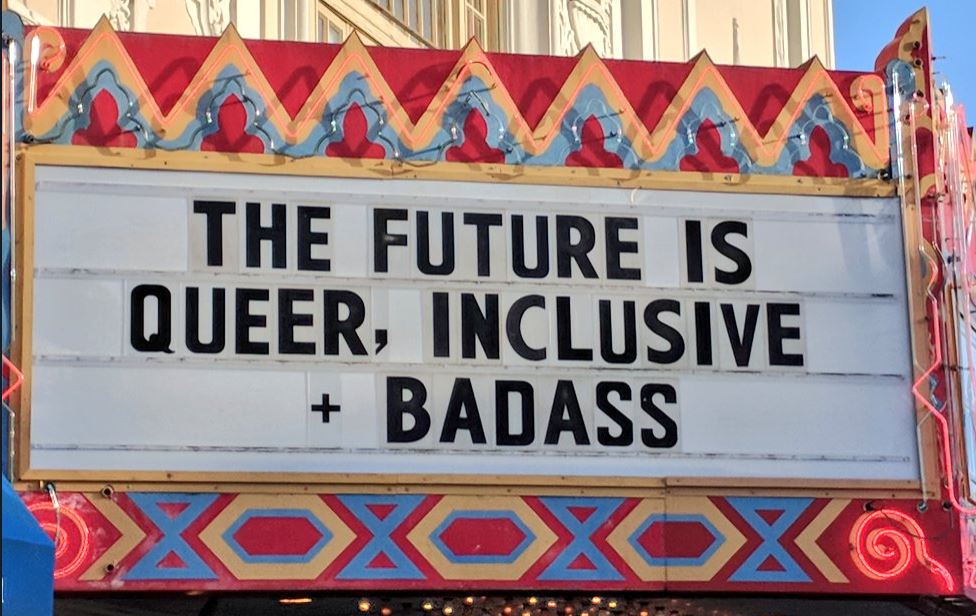 Love to see these posts on a brighter tomorrow!  (Today)

At least it's one we better be a part of!  (creating, consuming, living...) -- thanks Michelle!

Great post, Moya! Thanks for sharing the event highlights

I like to think that while technology brought us the means to hurt people it also brings us the means to make our lives better. For instance, the infamous Nextdoor is frequently ridiculed (justly so) for being a platform for your neighborhood racists and bigots. But at the same time in our neighborhood it truly helped us to bring everyone together and organize many events, which never happened before (even though the houses were built in late 90s).

Unlike guns, technology is not designed to hurt. It is, to some extent, fortunate that a good person can still stop a bad person with technology. And it's uplifting to see so many good people are still out there.

Great point about Nextdoor -- it's an awkward reality in my neighborhood too.  Thank YOU, Jelena, for reading and sharing this comment.  You totally hit it on the head.  I would hope that most technology is not designed to hurt --- even missile developers were at #LWTSummit underscoring that their goal is self defense -- but I think as long as the widest band of humans possible is innovating, we'll be far better off than if just a few kinds of humans get togehter and own it all.  I'm continually pleased, and we are fortunate, that you too are a part of that breadth of diversity the SAP community!