In the previous blogs we discussed the first six topics (Top 1 to 6) from the IBCS recommendations. In case you missed the previous entries so far, please scroll down to the end of this blog entry and you can follow the listed hyperlinks. 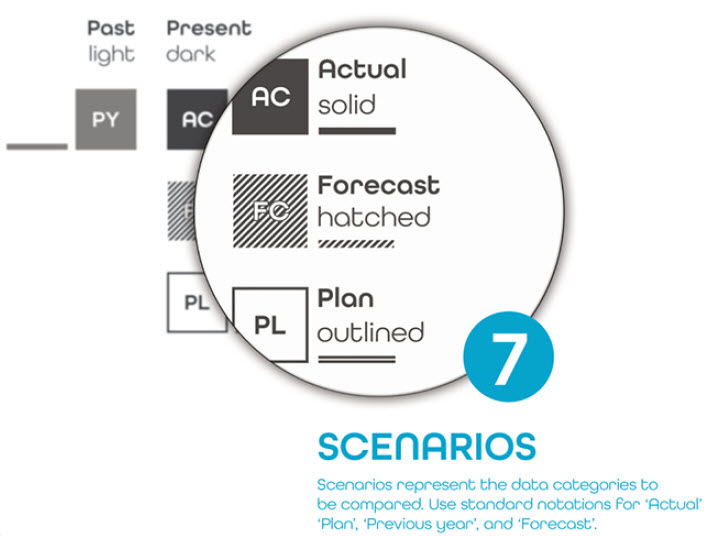 So as next step we will look at the topic of scenarios.Scenarios – (or sometimes referred to as Versions) – is the notion of different layers or different business scenarios / models.

.. and I have to say that I am personally a huge fan of this and that I am using a very simple example in most of my presentations where I simply show this…. .. and then I start counting the seconds until the first person responds with “this is actual vs budget / plan” and then I follow up asking what the concept behind it is (filled vs still to be filled).

Normally it only takes 2 – 3 seconds for people to come back with the answer of actual vs budget, which to me is a strong proof, that following a set of rules and standards clearly helps people to understand and consume your information quicker.

So lets take a look at a simple example: 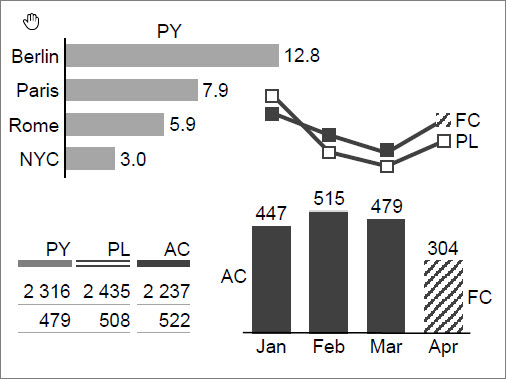 In the above example the following definitions are used:

.. with the difference between Forecast and Plan, that the Forecast does take actual measured data into account – so the forecasted scenario has a higher level of certainty than the plan.

For each scenario there is a recommended color and pattern. 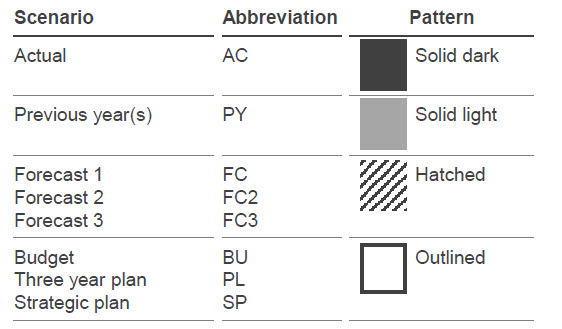 We will make use of those when we look at how we can convert a “not so greatly designed” table into a table following the IBCS recommendation in one of our upcoming blog posts / videos.

But to show how SAP Analytics cloud supports the concept of the scenarios, here a screenshot of a chart configuration.

In the above scenario I configured the color based on the dimension Date and configured for 2016 the color, but the more common scenario would be to have an actual dimension that identifies the scenario and then use that to identify and configure the necessary color and pattern.

In the below scenario we use a dimension Category and we configured the color and patter for the Actuals (sorry for showing Actuals as 2016). 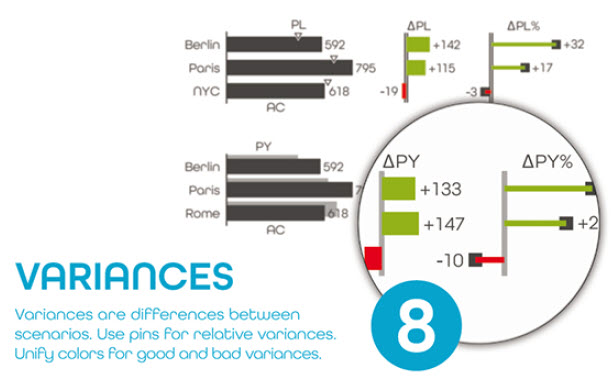 The next topic – Variances – goes hand in hand with the previous topic as in most cases when people look at data from 2 years you also want to look at how you compare to the previous month or previous quarter or year, so you going to have to visualize the variances.

With regards to the variances, not only does IBCS recommend how a variance should be visualized but it also recommends a set of abbreviations.

For example, if you chart shows the Actuals (AC) and the Plan (PL) values for the current year and you include the variance as part of the chart, then the abbreviation would either be ΔPY for an absolute variance or ΔPY% in case we would show a relative variance. 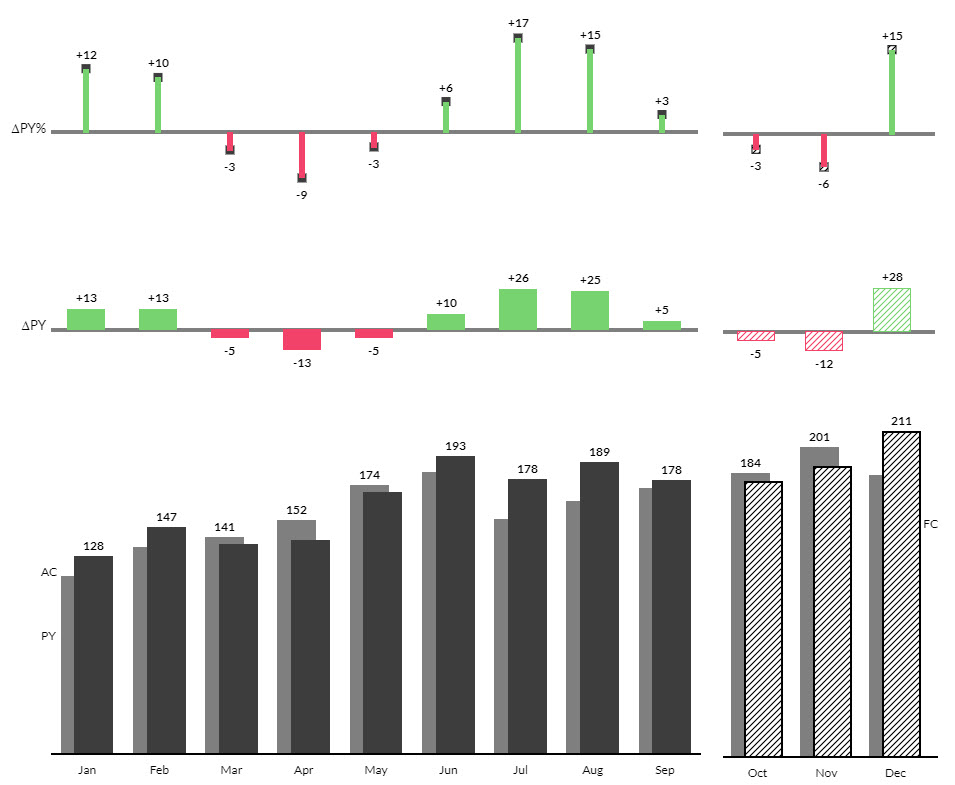 Above the chart we see the comparison once done showing absolute values and once showing as percentage values.

You can see that the variance is shown in green for positive values and red for the negative values.

You can also use an alternative and configure the second value as a small triangle and in that way indicate the variance (see below). 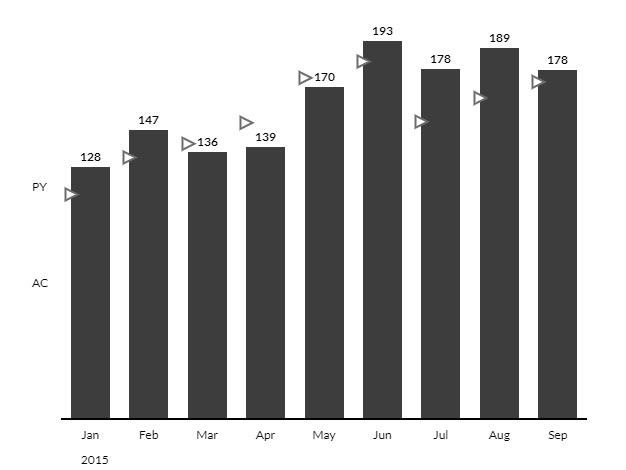 So far we have looked that option to compare measures – such as Actual and Budget – against each other, but the variance option provides additional capabilities. 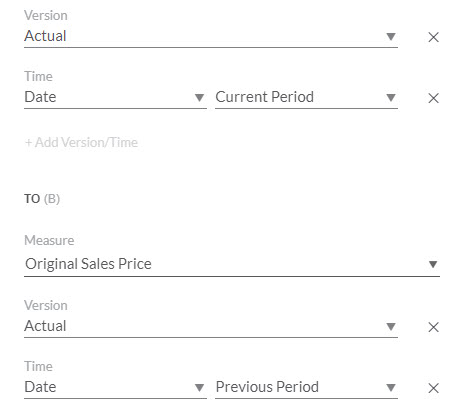 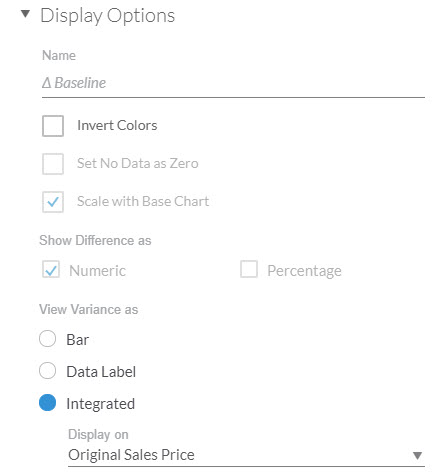 In the Display Options I then use the integrated option (see above) and can then very quickly identify how – in this case the sales price – went up or down month over month by not only looking at the actual values per month but instead also the comparison the previous month. 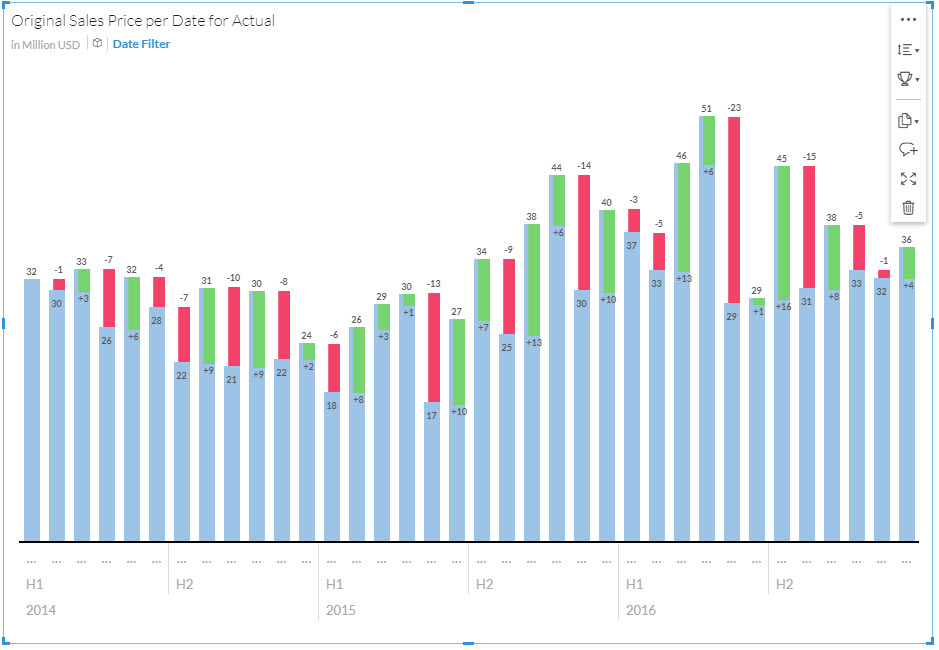 Great stuff, Big fan of IBCS!  Would be a dream to have all reports meet the same standard!

great work here, your Blog helped me a lot!

I have a questions concerning totals in bar charts. When I display Sales by Dimension Customer e.g. 10 different customers and I do this by a horizontal bar chat, how is possible to display the total just as a number in the same bar chart like IBCS does? Or is it even possbile yet?

Many thanks in advance and best regards!
Kai

But now I'm looking on how to implement TOP 10 (Highlighting) in my SAC Story. Any help on that one?

The very first screenshot in this page https://www.ibcs.com/software/sap-analytics-cloud/ shows a (1) and (2) in the charts and on the side.