Community Spotlight: What is it actually like using SAP Build?

If you have been following along with my blogs about SAP Build, you have heard from me about why I love the product, the Product Managers on some of the latest and greatest features, and now it is time to hear from someone who actually uses BUILD in their day to day work.

I reached out to a community member who works with BUILD in their day work. Not an SAP employee, but someone from our vast ecosystem of developers. I wanted to get the outsiders perspective on SAP tooling.

So thank you to Rajen Patel for answering my questions about how he and his team work with SAP Build! And check out some of his other contributions to the community like this blog. 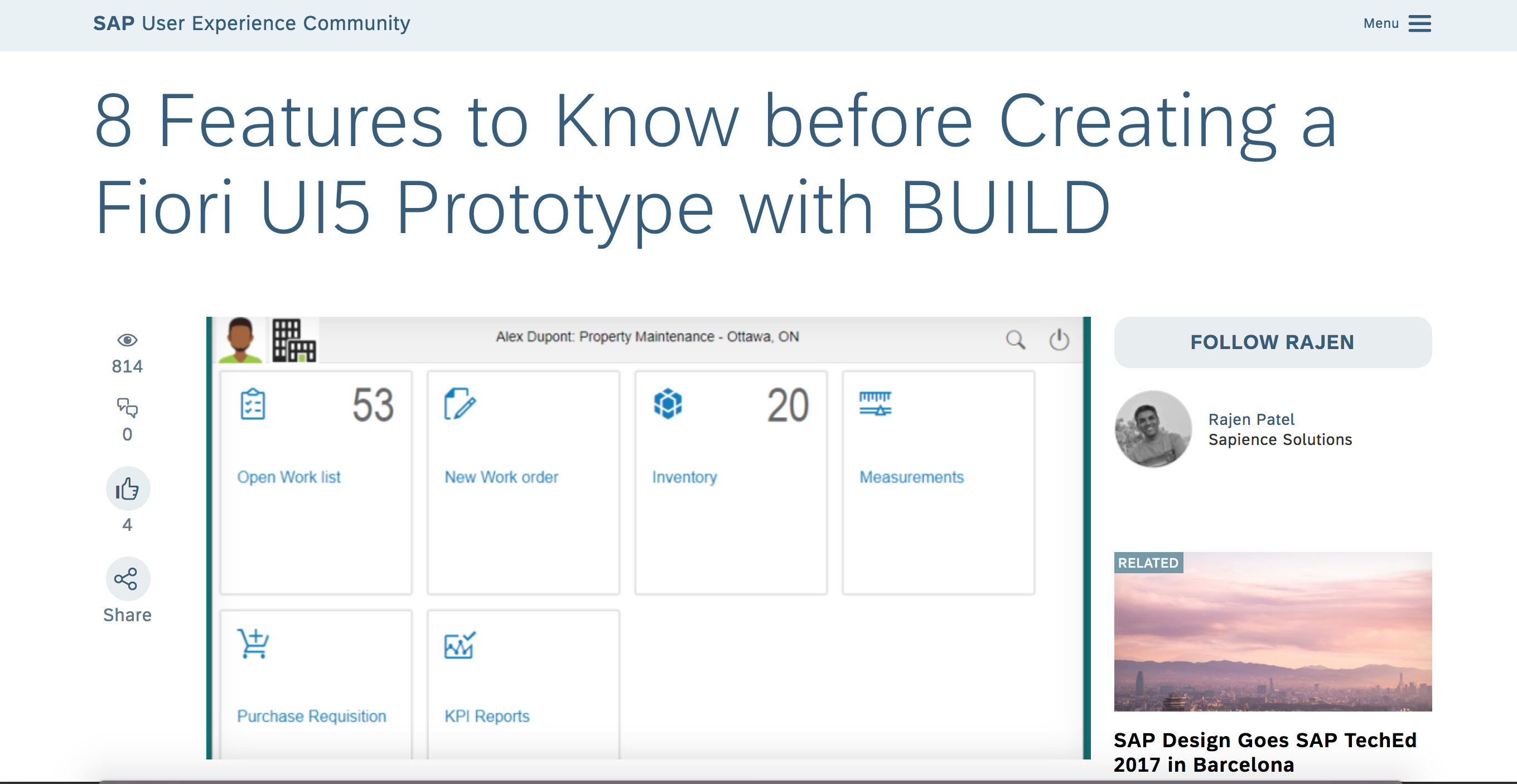 Q: With all the available design and prototyping tools available, why did you choose SAP Build?

A: Our main reason for choosing SAP Build is that it’s being promoted by SAP as a prototyping tool for developing Fiori compliant UI5 apps. We wanted to go to the source. The BUILD team at SAP did an amazing job at developing this easy to use prototyping tool. The OpenSAP course for Build was great way to learn basic functionality.

SAP Build provides integration with SAP Web IDE, so that helps us to jump start development. Whatever we developed in the prototyping phase is not throwaway work. All screen elements and UI designs can be imported directly into the SAP Web IDE and save development time. One last key feature we liked was availability of ‘Fiori compliant’ controls. It goes without saying that ability to design adaptive screen is big bonus i.e. Design one prototype that can fit all three major screen sizes: desktop, tablet and phone.

Q: Are there any features in BUILD that you have found to be very helpful? Is so, what and why?

A: SAP Build has almost all the features we needed for prototyping. Some were more useful than other in our case. Here I have listed few useful features for our last prototype.

Q: What is your use case for BUILD?

A: We used SAP ECC scenario for building maintenance and repair functionality. Our prototype included worklist, forms (transactions), and reports.

Q: How do you (and your team) utilize it?

A: This was the first time in my career I was able to create an interactive prototype. Most of the analysts like to design screens for end-users, and BUILD allowed our inner designers to go wild. Okay not wild, but at least it brought out our creativity that can be channeled through the standard UI5 framework and the team can collaborate in meaningful way. We created a project and shared it amongst our team. Personas were defined with the key information for each user group. This helped helps us to create empathy for end-users in our project team. This also provided focal for any discussion i.e. How a user will react to this feature?

We collaborated using various collaboration features such as comments and feedback. We used the project to conduct various demos as well.

Q: Is there a feature missing from BUILD that you wish was available?

A: Yes, few extra features that could have helped us. For example: End user should be able to provide feedback without creating ‘BUILD login’ – that would have been great. One more user ID and password reduces user engagement.

From development perspective, we could have used few more ‘Fiori Launchpad’ elements like Fiori screen header. Going forward we will need to create more complex forms for desktop application. Current form design is difficult to work with when one needs to create forms with 30-40 fields. (Yes, 30/40 fields to map really complex business scenario)

Q: Would you recommend for other developers to try/use BUILD? If so, why?

A: Yes. If one is developing a prototype for SAP products then SAP Build will provide a great value. SAP Build provides all three element of high fidelity prototypes such as 1) Screen (UI) 2) Realistic data and 3) Process flow.

You can’t go wrong with Build to develop Fiori compliant UI5 screens. It’s easy to use and provide lots of values for your efforts.