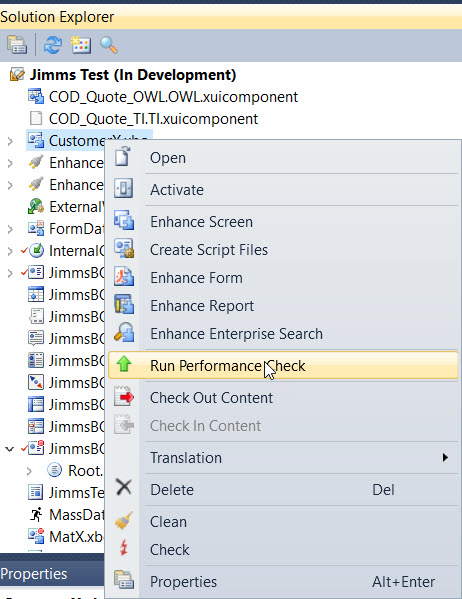 SAP Cloud for Customer is getting updated every 3 months. The added features are highlighted in the What’s New section in the documentation at help.sap.com/studio_cloud. These features are often capable of replacing expensive workarounds you had to do in the past to archive the same functionality.

This feature is an upgrade on the “Performance Tips” feature available in SAP Cloud Application Studio until the 1708 version(September 2017).

Starting from the 1711 Studio release, the “Performance Tips” feature is being replaced by a new “Run Performance Check” feature.

This feature will now be available on the following content types :

How if this feature different from the old “Performance Tips” ?

This feature will now display the results of the Performance check directly in the “Error List” window instead of the previous feature where results where shown in a pop-up window. Now,clicking on the suggestion will take you directly to the file and line where the suggestion is applicable. This enhances the usability of this feature as iser can now navigate and correct each suggestion.

The feature has also been extended from only absl scripts to be available on four other places as mentioned above. In the future, it is planned to extend this feature to more content types in Cloud Application Studio.

The option “Run Performance Check” available on the header level in Solution explorer on right-click of the solution name will start a background job and you will now receive the results via an email with attachment from the SAP system.

Currently the only messages from Business Object/Extension Business Object check is “Representation term ‘Text’ of data type ‘LANGUAGEINDEPENDENT_LONG_Text’ does not fit to element name ‘Locality’.”

This is just an Information(info message) for the developer that the element/field name added to the current BO/XBO doesn’t match the name or the pattern of the data type. Many times fields are added to the bo/xbo defintion as temporary fields or to try out a specific functionality. If these fields are not removed from the defintion before the solution is assembled they get shipped to the Production tenant/Customer Landscape and they can never be removed. As a result they end of consuming space and resources in all Transactions between UI and backend but never actually serving  purpose.

This Performance message Highlights all fields that have a mismatch between element Name and field Name to give an idea if any unwanted fields exist in the bo/xbo Definition.

The Performance check Messages from ABSL scripts can be interpreted as follows.

1.2.1 Too many retrieves by navigating through instances :

The message for this check reads as “Additional use of association ‘toBusinessPartner’. Define a local variable once and use it in all resp. places.”

The ABSL language makes it very easy to navigation through objects. Behind the scenes objects are being retrieved and discarded. In a nutshell, every dot retrieves something. Either a node or an associations. Accessing a node is fast, retrieving an object by association much slower and doing it over and over again easily adds up to several seconds.

For performance reasons, retrieves by association should be kept at the possible minimum. Results from retrieve by associations should be buffered in the coding if possible.

In the below code, toParent, toBusinessPartner, EmployeeResponsible and DefaultAddress are representing associations. The code results in 13 retrieves on the server side.

A better code example would save the instances in local variable. The example below works with 4 associations, would speed it up by atleast a factor of two.

Keep in mind that .IsSet() leads to an association. Avoid redundant “retrieve by association” operations by storing the result of an operation in a variable / collection

The message reads as “Trace statements slow down performance. Use debugger instead.”

A pretty easy improvement is the removal of trace statements. If you have code like this in your project:

The this.toAnotherBO.Count() is getting retrieved and executed even when the trace is not set to active.

The message reads as “Pass data during create instead of setting the attributes afterwards.”.

Further Code would then update the value of fields in the variable “createdinstance”. This will lead to update calls and buffer flushes which could have been avoided if the the Create() call above would have been done along with the data already filled.

This check finds such places and suggests to Change the Code to something like this for improving Performance :

The message reads as “Where() statements directly convert to for-loops and slow down performance. “

The Where() calls actually convert straight to foreach()  loop calls in the backend. This is not very obvious form the Syntax of the calls and hence leaves the calls open to Interpretation and misuse.

If the Where() call is executed on a large/unsorted set of data, this one line of code can end up consuming a lot of time and hence this Performance check advises you to use the where() call wisely.

The message reads as “Avoid dump : Use IsSet() to check the value returned by association Address. “.

This message is not so much a performance suggestion but rather a coding suggestion. If a line of code is written to navigate using association then it’s wise to check if the association has some data before navigating to the otherwise there will be a dump.

The Performance check built on MDRO(.run file) in SAP cloud application studio analyze the design of the mdro as well as the ABSL script that this run executes. The list of performance check is a combination of these two checks : 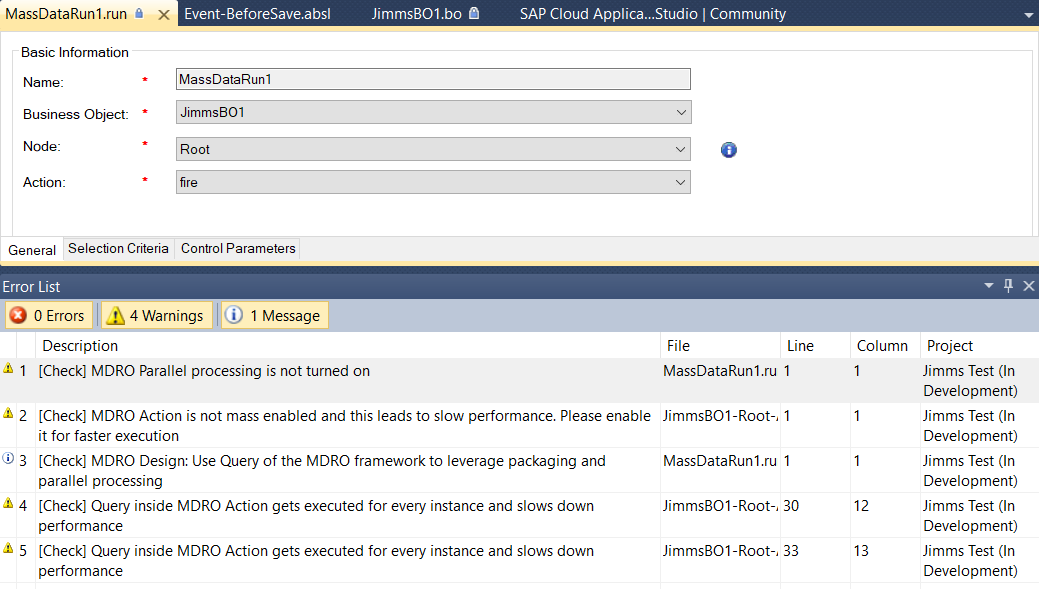 1.3.1 Parallel Processing : The message reads as “MDRO Parallel processing is not turned on.”

This property enables the framework executing the mass data run to break down the execution in 6 parallel process with 50 instnaces in each process.

Let’s say the query defined in the .run file returns 600 instances. If parallel processing is not enabled each of the 600 instances will be executed one  by one and the absl code will be called for each one of them sequentially. This may lead to a high time and resource consumption based on the logic written in the absl code. The mdro run have a static 10 hour execution window after which the run will be terminated so it’s a possibility that the run fails. By switching ON the parallel processing, the execution can be finsihed in a shorter time frame.

Caution : The parallel processing feature should not be turned ON if the code written for the run has logic that can update the same document/instance for two different mdro records i.e. if the MDRO runs on Opportunity and the code running parallely on two different oportunities updates the same Customer information, then a locking object error will error will occur leading to failure of the mass data run.

The ABSL code linked to the mass data run is not mass enbled. If it is enabled then all the 50 instances in one process will be executed at one go and hence will take lesser time because queries and searched which would have otherwise been done 50 times will only be done once.

1.3.3 MDRO Design/Query inside ABSL : The message reads as “Query inside MDRO Action gets executed for every instance and slows down performance.” and “MDRO Design: Use Query of the MDRO framework to leverage packaging and parallel processing”

If there are queries written inside the ABSL code, they will be executed for each MDRO instance, so basically the same search is performed over and over again. Hence the info message to leverage the query of the MDRO design is combined with this.This is a suggestion to get the wanted list of instances from the MDRO query and try to reduce writing queries in code to imrove performance.

1.3.1 Lazy load UI components : The message reads as “The Lazy Loading property is not enabled for EC TestEC.EC.uicomponent added to UI via Extensibility Explorer.“

Here is how one can enable lazy loading for custom facets(Embedded Components/EC) that have been added to screens. Open the main floorplan from Cloud application studio by right click on the UI file and selecting ‘Open in UI Designer’. 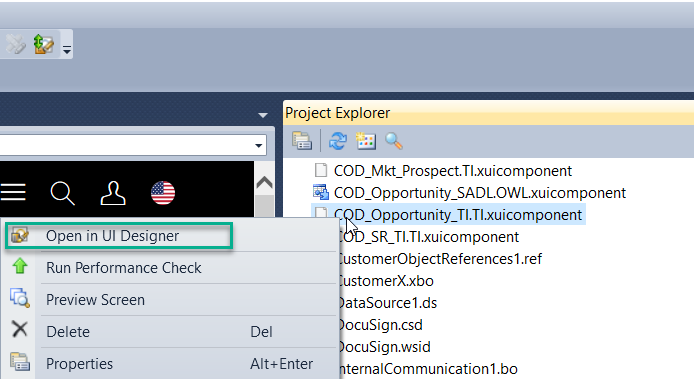 Then right click on the facet/tab area(best to right click just before the Overview tab at the beginning of the facet strip) to display the ‘Extensibility Explorer’. Click on ‘Add view with embedded component’. A pop-up appears and here the check box can be checked to enable lazy loading.

If a facet/tab is already existing one can check if the lazy loading is enabled or not by checking the properties of the embedded component as shown here : 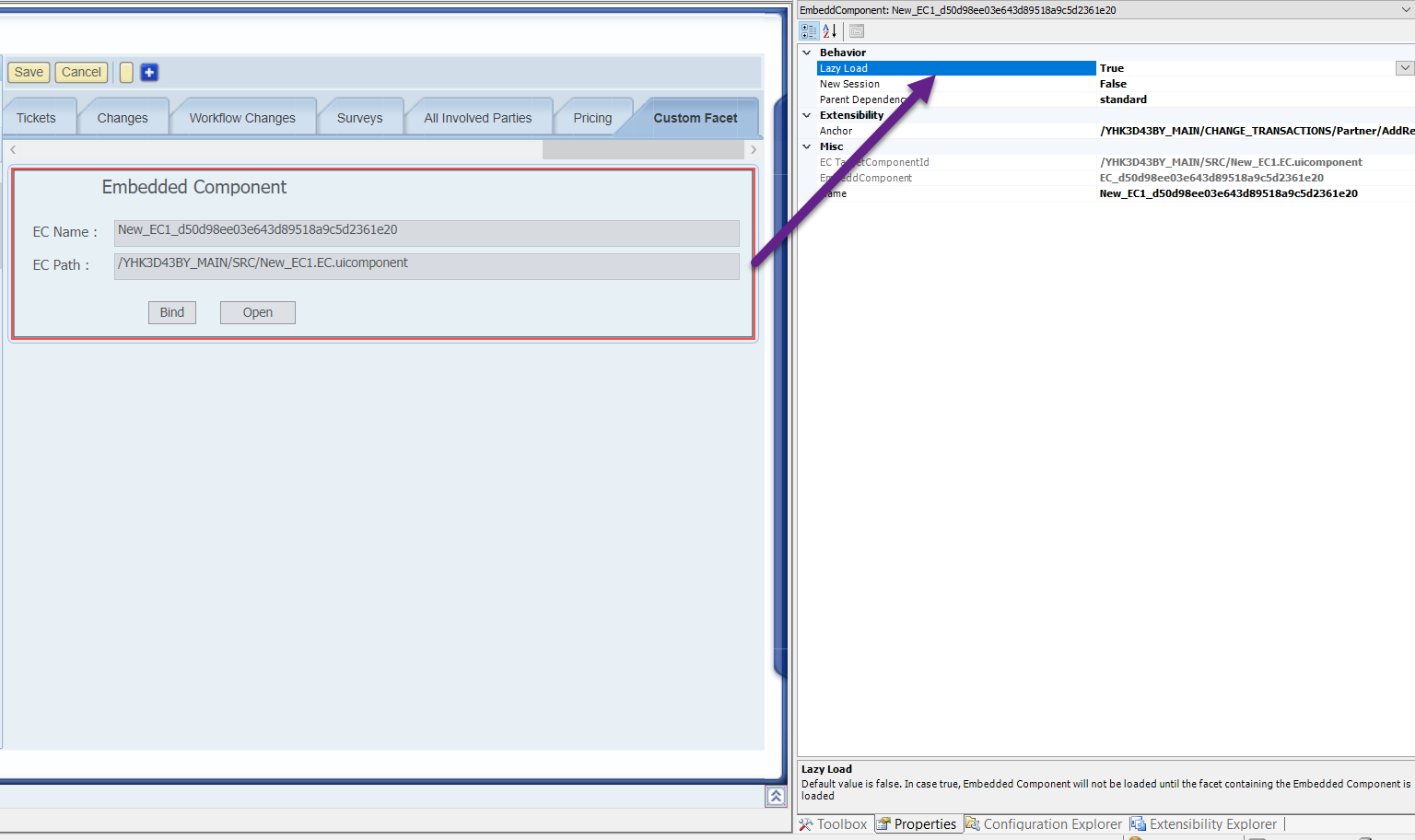 In such cases it is best to remove the existing facet and re-insert it with the lazy loading marked as true. The existing binding can be removed by expanding the ‘Add View with embedded componenet’ button using the tiny arrow next to it .Identify the change corresponding to the added facet by opening the xml using the icon buttin ‘Show CT xml’ and making sure that the ‘tabTitle’ is the same as intended for deletion. Then click on the ‘Delete CT’ icon button to remove the facet and follow the steps mentioned above to enable the lazy loading. 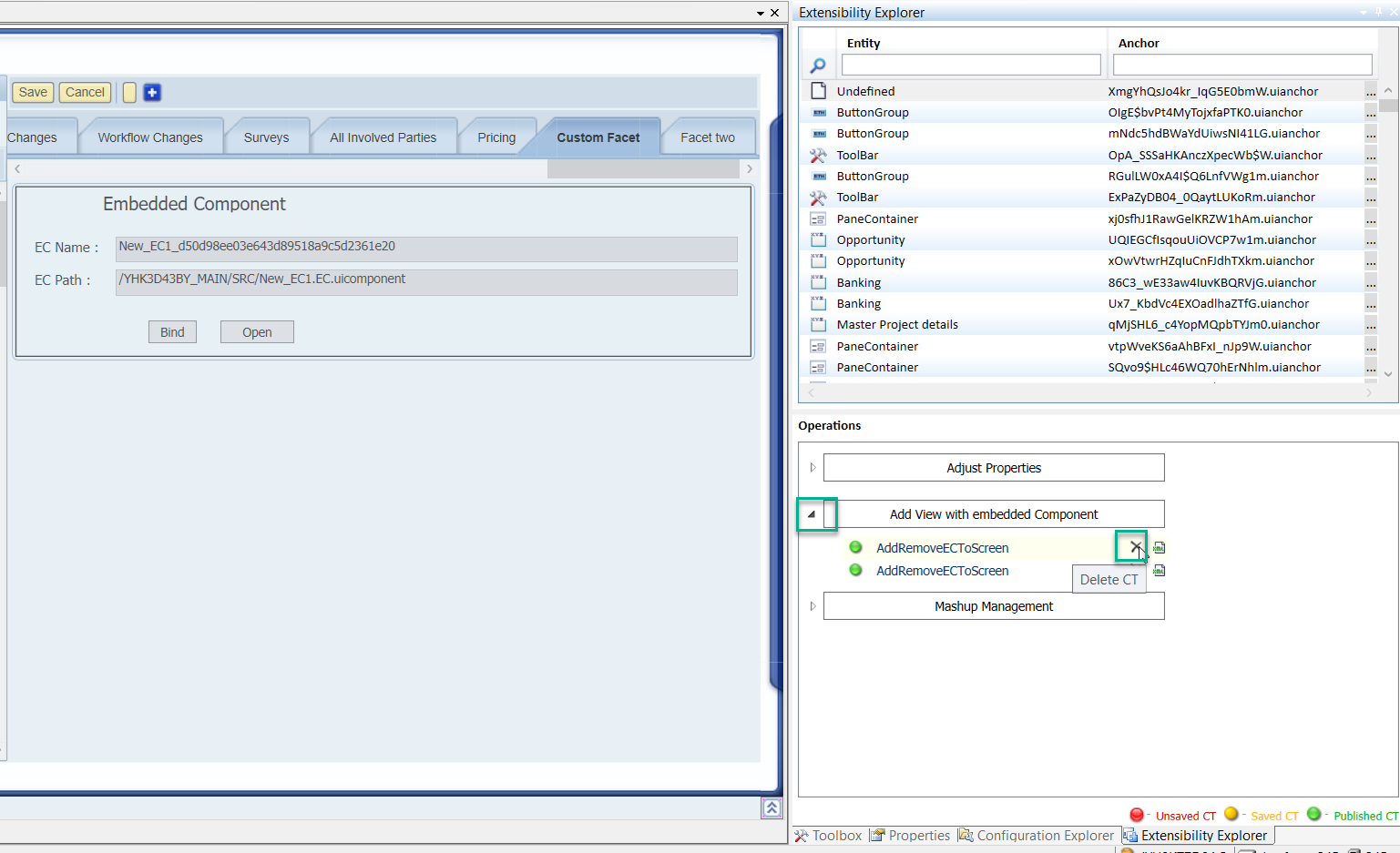 1.3.2 Enable operation clubbing : The message reads as “The property to enable Operations Clubbing is turned off for this UI file.“

This feature allows the packing of multiple UI resources (javascript, css etc.) into one package. This effectively leads to a smaller number requests required on client side. It can be enabled by setting the floorplan property “Enable Backend Operations Clubbing”  to “true”. This has an effect mostly on very slow connections with a high latency (mobile 2G/3G networks).

PS: Thanks for reading. Please click on the pictures to auto-expand and have a better look at the details.

Nice Blog Sameer !!! Thanks for documenting it.

Thank you very much for this great Blog!

However, I was unable to find where to activate operation clubbing and the lazy loading option. Could you please share some information about that?

I saw your message only today. So here goes the reply:

Both 'Operation Clubbing' and 'Lazy Loading' are properties of the UI file. They can be set by opening the file using the UI designer tool. All UI files can be opened in UI designer directly from the Cloud application studio.

Hope this helps. I will try and add some screenshots in the blog.

thank you for the answer. We still were unable to locate where exactly these fields are in the UI Designer. I would be very pleased if you could add some screenshots to the blog!

I have updated the blog with steps and pictures on UI performance improvement. Please click on them to expand and have a better look. I hope it helps you find the properties. Let me know if it still doesn't work out.

You mention Trace statements cause slowdown because the statement is always evaluated. Assuming the body is a constant value, does the Trace operation itself cause a slowdown when nobody is running a Trace session in the SDK?

On scripts executed (relatively) rarely (like on BeforeSave of a CustomerInvoice) I would really like the Trace info over a bit more performance.