Finally after a long time I’m back again with my observational stuffs :p.

So this time its SCD1. For those who are new please have a glimpse of what is SCD1.

if (existing target records have been changed at source)

SCD1: Updated the existing records if already present in target or insert the new records present in source.

Normally SCD1 can be implemented by either using Table Comparison or by setting Auto-Correct load to Yes but what if this same can be done using a delete script?

Consider the below requirement where I’ve two dataflows.

Stage_df contains the data which get loaded from source to the staging table. 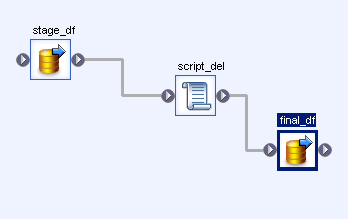 Before job execution data present is,

Upon executing the job, data in staging table is:

and data in final target table is:

Delete script did nothing for this first load.

Now suppose if next day two new records are inserted then using only the staging table will not suffice and meet the requirements because:

So this entire data from staging will be dumped to final table that’ll store the changed data and newly inserted data.

But how to maintain SCD type 1?

Imagine how easy would it become if I select all the records which are present in Staging table and then compare these records with final target table. If there happens to be some matches then delete the data present in final table and load it with the staging table. Let me make it clearer!

Source data will be loaded to the Alternate_rbd8 table present in stage_df and from there the records will be moved to final table, Alternate_final_rbd8.

Script_del is the magic here!

This script is going to delete all the existing values from  Alternate_final_rbd8 table and load the new records from source.

Now let’s consider that some new records have been added (row_id = 18,19,20) and one existing (CODE value changed from 1000 to 9000 and OLD_OPT_CODE changed from H to R for row_id = 3) record has been modified into the source which aren’t present in the target. 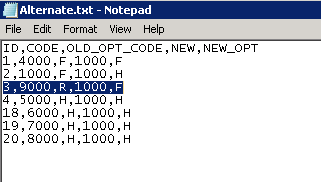 Before execution data in final and staging table is,

After job execution data in staging and target table is,

Now this time I delete two records from source (Row_id = 1,2)

So the existing records in target, which have been modified at source level has been changed and this was SCD1.

And yes, its faster than Table Comparison and Auto Correct Load.

Now let me put some light on how does this sql query processed the records.

Hope this article was helpful! 🙂

Please let me know if I’ve missed anything or there is something incorrect with my understanding.

Nice one, there is only one typo in the blog where text is saying "(CODE value changed from 1000 to 3000 and OLD_OPT_CODE changed from H to R for row_id = 3) " but actually CODE value was changed to 9000...You know this is just a proof that I actually read the blog, not just liked it:)

Thanks much for correcting Blaz. 🙂

I corrected my typo error. 🙂

Nice Info. i thing we can achieve the same with only map operations transformation (Without Table comparision and Autocorrect Load)