With SAP Process Orchestration 7.5 SP10, we have improved the lifecycle management of integration flows and other configuration objects within the Process Integration Designer perspective of the Eclipse based SAP NetWeaver Developer Studio. So far, handling change lists in the Eclipse environment was quite limited compared to the corresponding functionality in the Integration Directory tool, i.e., using the Java Webstart UI. The My Changes view in Eclipse allowed you to run consistency checks, and to either activate or revert your changes. With the new change list explorer you can do much more when it comes to handling change lists, such as:

The new capabilities that we have shipped here were actually based on a feature request that was submitted as part of a customer connect project for SAP Process Orchestration that we ran until begin of last year. At that point of time it was not taken up because of other requests that were higher ranked by the customers that participated in the project. So, this hopefully shows you that the list of feature requests that we collected then has not been put into the recycle bin of my laptop. In fact, it is still taken into account for future improvements. As a heads up, based on this list we also decided to work on improving regression testing for process integration.* More to come soon. Anyway, this shouldn’t be the topic for this blog. So, let’s go back to the topic of the change list explorer. I will run through a couple of the above mentioned activities to show you how it works. 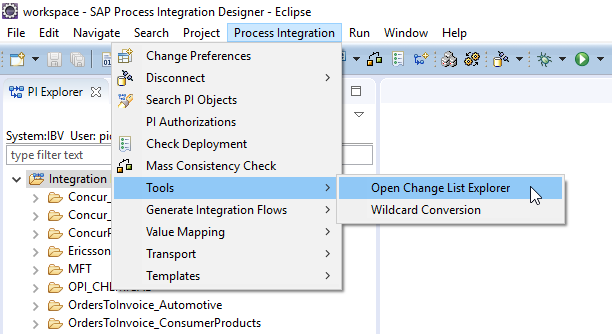 A new tab opens in the lower right pane of Eclipse showing by default all change lists assigned to you. 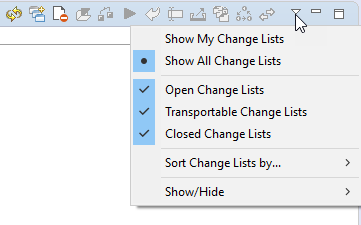 Let’s create a new change list. This can be either done from the icons in the menu bar or from the context menu of the pane, see below. A new dialog comes up where you need to maintain a change list name and description (not shown here). 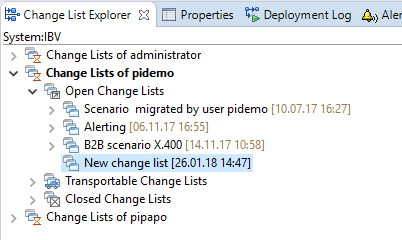 Oops, we made a mistake, and need to rename the beforehand created change list. This can be done from the context menu. 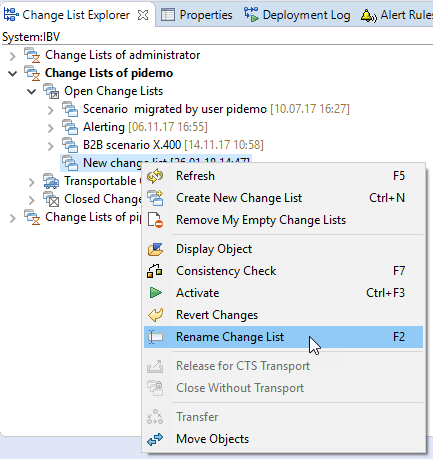 In the upcoming dialog, select all objects which should be moved, and click on Next. 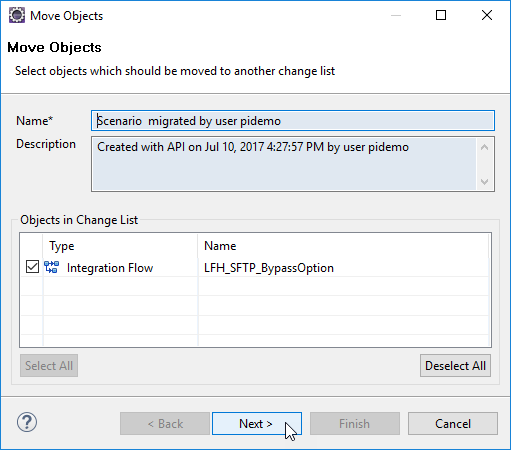 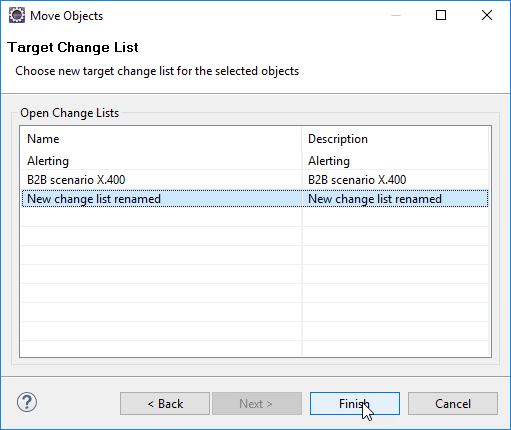 The objects have been assigned to the new change list. 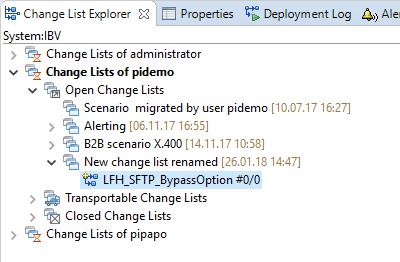 By the way, drag & drop would have been worked here as well. 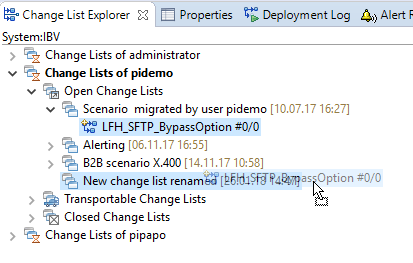 A dialog opens where you can change the transfer option, then click on Finish. 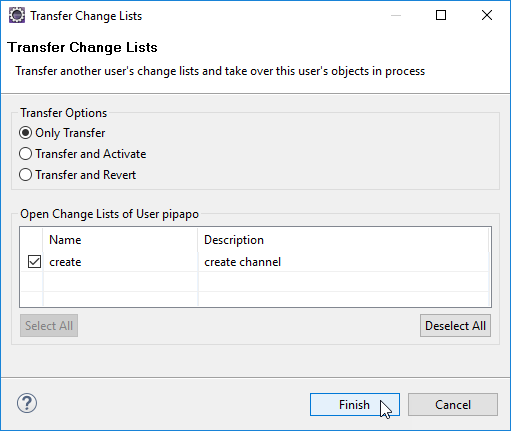 As you can see below, the change list has been assigned to your user. 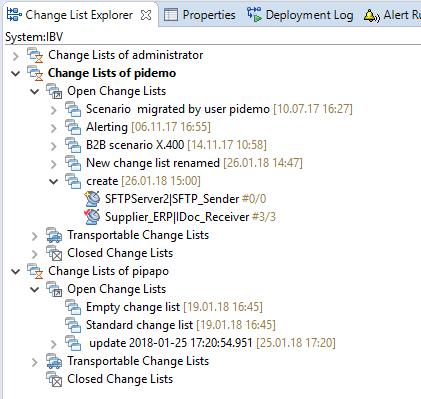 Before activating a change list, you can run a consistency check from the context menu of your change list. All objects assigned to the selected change list are checked. 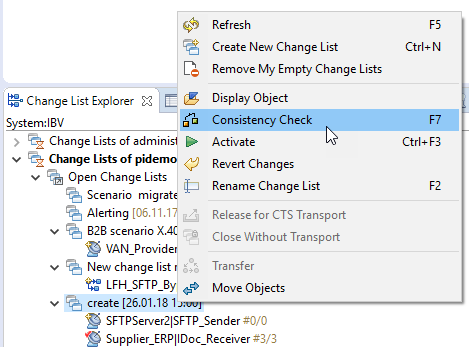 Upon completion of the check, a pop-up comes up informing you about the state of the check. In our case, issues have been found. Otherwise you get informed that the consistency check has been successfully completed.

If you switch to the Problems tab, the issues found are displayed in more detail.

Once you have fixed the issues, you can activate the change list. Optionally, changes can be reverted. 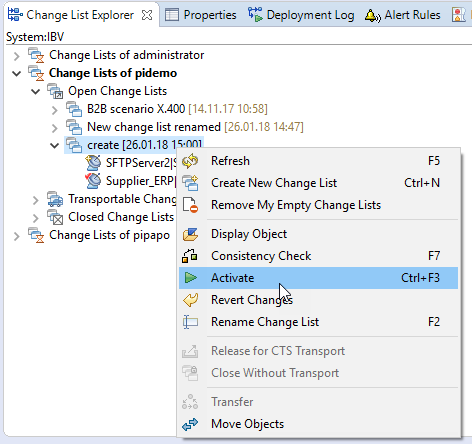 Upon activation, the corresponding change list is shown below the transportable change lists node (assuming that CTS is configured). 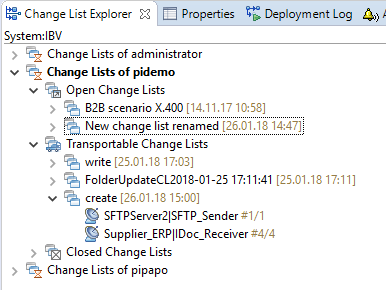 Finally, you can either release for transport to trigger the transport or close the change list without transport, latter in case that changes should not be transported to the production system. 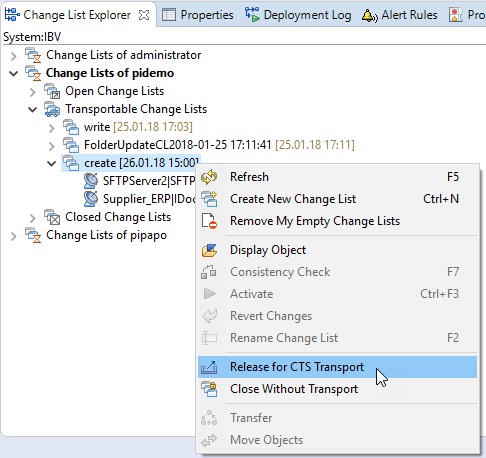 A handy feature is the removal of empty change lists. This helps you to clean up the list of change lists. From the context menu, select the entry Remove My Empty Change Lists.

Empty change lists are automatically detected and displayed in the upcoming dialog. Click on Finish to confirm to delete the same. 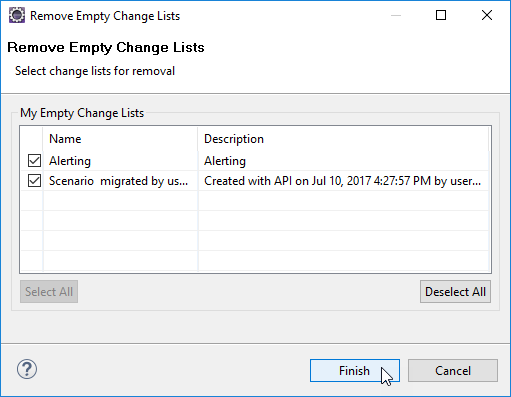 Here we go. All empty change lists have been deleted. 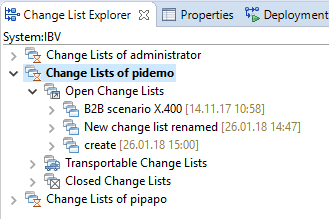 You find more information in the documentation at Working with Change Lists.

Footnote:
* This is the current state of planning and may be changed by SAP at any time without notice.