We’re almost done! In the previous post we looked at how we marshalled data to post to the nominal beer wishlist. Now it’s time to send that data to the wishlist. As the focus of this series is the Workflow service on the SAP Cloud Platform and not on peripheral affairs, we’re just going to append the wishlist entries to a list on a remote data service. I’ll leave it as an exercise for the reader to implement a UI for that wishlist data.

Like script tasks, service tasks are very straightforward. They’re slightly more involved, given that they are designed to make HTTP requests to remote endpoints, and there’s sometimes a little bit of fettling required, mostly relating to security and connectivity aspects.

So, where are we? We’ve got the wishlist entry data marshalled and ready to send. Let’s remind ourselves of what it looks like:

As well as G Suite, I’m a big fan of the Firebase ecosystem, having dabbled with it for a while (including musing on the possibilities when you add Firebase to UI5 – see the “Firebase and SAPUI5” post from back in 2012 if you’re curious). I’ve created a simple Firebase project and am using the database as my target wishlist storage system. It’s really straightforward to build a UI5 app on top of a Firebase database; my friend Former Member and I built a Firebase-powered dashboard and separate UI5 companion app to control it – it was on show on the Google stand at SAP TechEd in Barcelona in 2017.

Here’s what the data looks like – each wishlist entry appears as a node within the “wishlist” node: 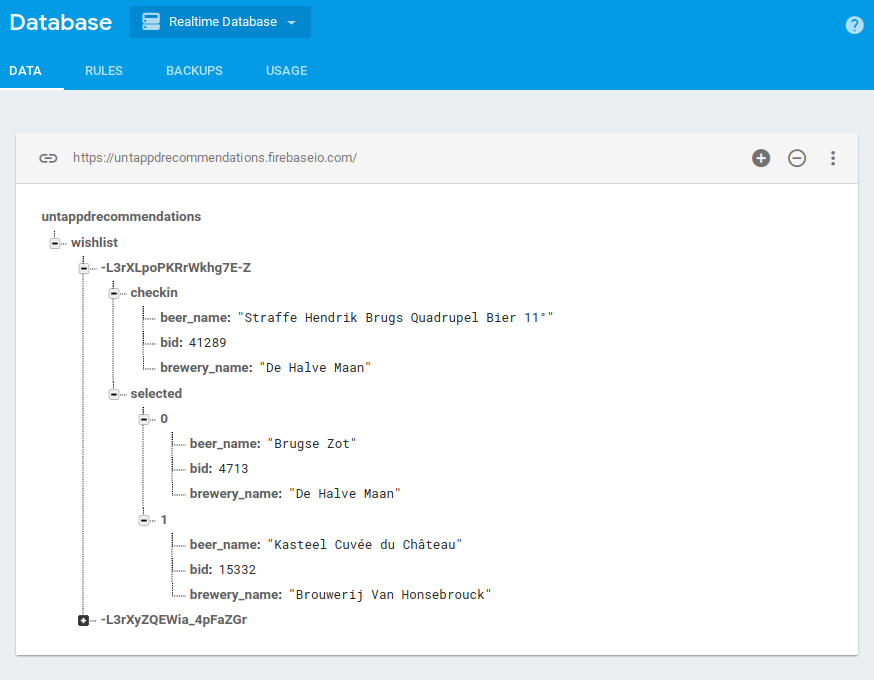 You can see the structure of the marshalled data being reflected directly as child nodes here. There’s another collapsed node (ending “_4pFaZGr”) within the wishlist node, containing another wishlist entry.

The service task is the last task in the workflow definition, and the details look like this: 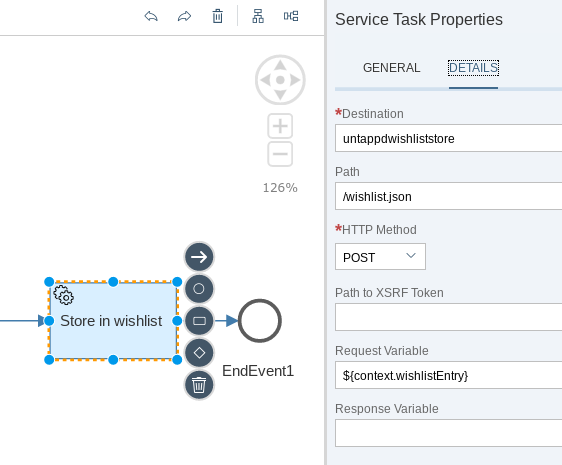 You can see a more detailed explanation of these service task settings in the great series by Murali Shanmugham – in particular see Part 3 of Implementing a user self-registration scenario using Workflow and Business rules in SAP Cloud Platform. We’ll just focus on the settings needed here.

The execution of a service task like this is the result of the lovely coordination between three things:

Here we’ve specified “untappdwishliststore” as the value for the “Destination” setting. You guessed it – this is a destination managed within the Connectivity service, a service central to almost everything that goes on in SCP.

Let’s take a quick look at how this destination is defined:

The full value of the URL here is:

If you refer to the Firebase database REST API documentation, you’ll see that this is the “root” URL for the data store in the Firebase project “untappdrecommendations”, and read/write access to the nodes within the data store is available simply by extending the URL to include path info referring to the node required. For example, this URL:

refers to the “wishlist” node, such that a GET request works like this:

Note how the documentation describes simply appending “.json” to the URL to make things work.

We can add children to this node by using POST, again, specifying the path info:

Of course, we need to supply the child data in JSON, which, serendipitously, is exactly what the service task will do for us.

With this in mind, it makes sense that the value specified for the script task’s Path setting is indeed “/wishlist.json”, which gets appended to the URL defined in the destination.

This resource is not XSRF-protected, so we don’t need to have the script task service fetch a token for us first (and then supply it in the actual POST request), so the “Path to XSRF Token” setting remains empty.

Finally, we need to specify where the data is that we want sent, and where (if anywhere) we want what comes back in the response to be stored. In our case, we’ve marshalled the wishlist entry into the “wishlistEntry” property in our context, so that’s what we specify. And we’re not interested in the response payload so we don’t specify anything for the Response Variable setting.

The service task in action

Let’s see the service task in action. We select the two beers highlighted as recommendations: 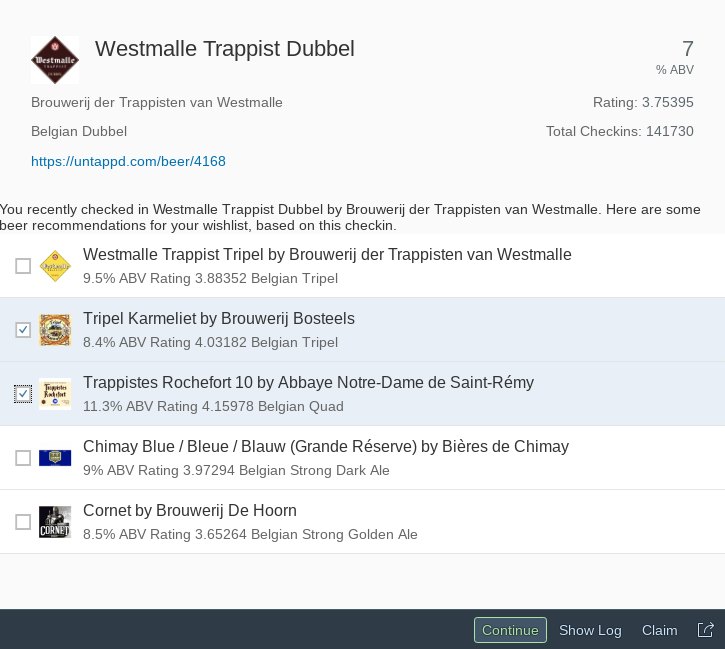 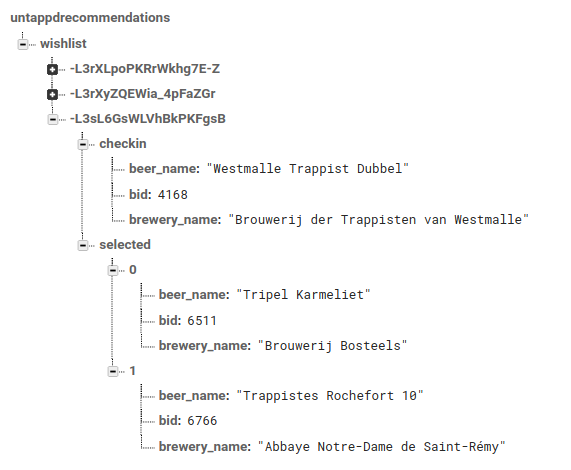 By remaining in the workflow monitor app (which we looked all the way back in Discovering SCP Workflow – The Monitor), we can see the execution logs run to completion before the item disappears (as the instance is set to complete): 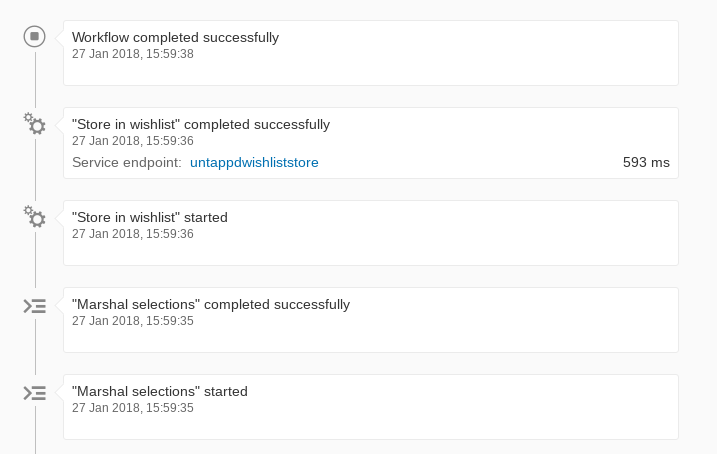 Clicking on the “untappdwishliststore” link there shows the method and the URL used for the service endpoint:

I thought it worth mentioning that an earlier iteration of this step in the workflow saw me trying to send the data to a Google spreadsheet, using Google Apps Script (exposing a web app). This is something I do very often, and it’s super useful.

I typically use the Content Service to return responses to requests that I’m handling with such a script, but there’s a security design feature that means the response to requests to such web apps is served from a different host, via an HTTP 302 FOUND redirect mechanism. This is all well and good, however the HTTP specification states:

“If the 302 status code is received in response to a request other than GET or HEAD, the user agent MUST NOT automatically redirect the request unless it can be confirmed by the user, since this might change the conditions under which the request was issued.”

That means that when sending a POST request to an endpoint that responds with a 302 status code, the service task mechanism cannot automatically follow that redirect, as it’s obeying RFC2616. One does not simply ignore RFC2616!

The upshot of this was that I was unable to make a POST request to my apps script successfully. I may look at avoiding the Content Service in future iterations, but it’s not that important right now.

Our workflow is complete. It was a relatively simple one; nonetheless it shows many of the major features that the Workflow service offers. The journey of discovery I’ve been on in preparing for and writing this series has taught me a lot about the service, and I’ve become a fan.

I hope that you get something from these posts, and look into the Workflow service too. It’s positioned to be a very powerful and capable set of tools for connecting humans and processes across the range of systems (SAP and non-SAP) within and beyond an enterprise.

The Workflow service is a great example of what I see as the new SAP – as I tweeted earlier this week, I built the entire workflow, wrote and tested the JavaScript, debugged and iterated upon the flow definition and worked out what I was doing and where I was going, entirely online, using no workstation-local tools. My workstation is running Chrome OS. (Yes, I wrote this series all online too, of course). I suspect this trend towards web terminals will continue.

I’ll drink to that!

Thanks for your sharing, when I do the work about workflow, there is a question confuses me: 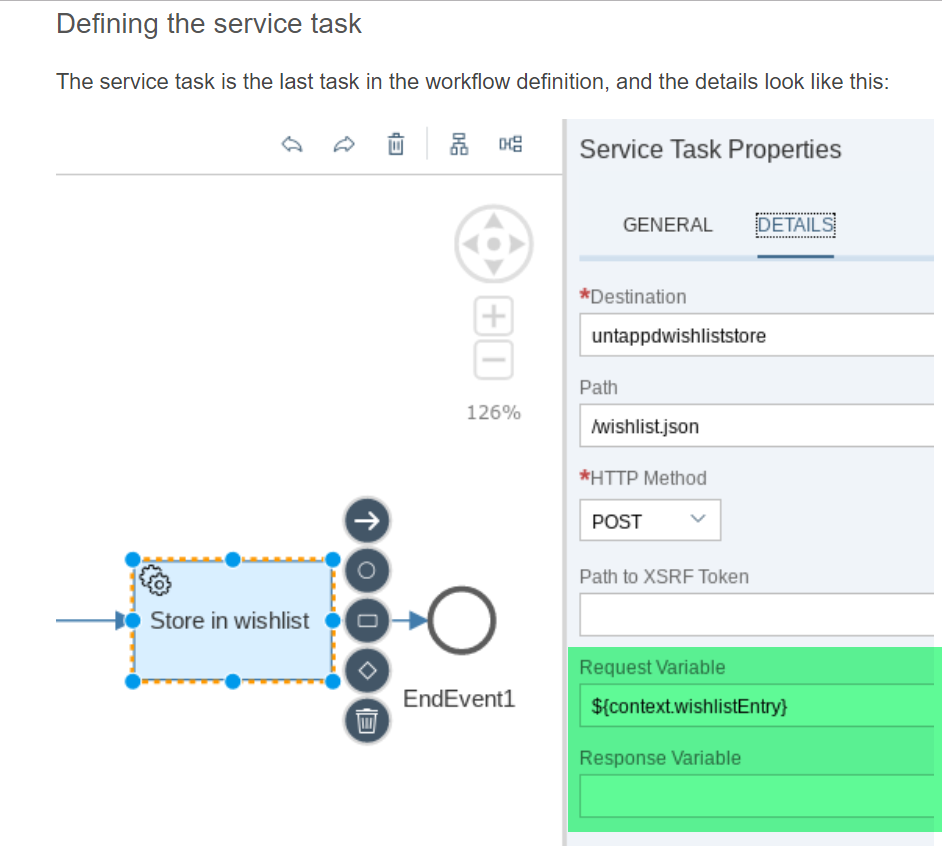 When we configure the details about these variables, the expression of the value "${xxxxx.xxxxx}", is it an EL expression or a Template String ?

You're welcome. They're expressions as defined by the Java Unified Expression Language. They're not template strings (or template literals), which are identifiable by the enclosure within backticks.

OK, JUEL expression, I know it. But I still confuse about this:

Can the two expressions be used for the same purpose?

When I configure my service task, I try to change the JUEL Expression to the Script Task API, it caused a syntax error:

On the other hand, when I read the Expression, it might mean the two expressions are same. 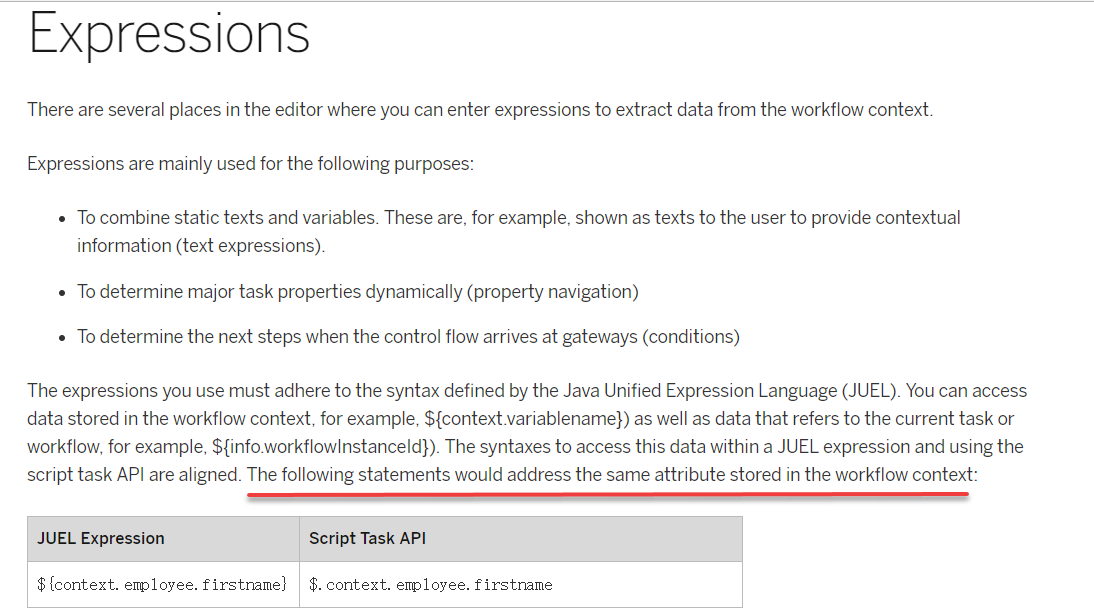 Thank you for reading my question. Could you please give me any help?

The JUEL expression form is what you need to use in the service task. The Script Task API form is ... for script tasks. This is a service task 🙂

Got it, can I consider of the two expressions like this?

They can invoke the same attributes, but we need to use them in different scenarios?

Yes, one is for use in the Script Tasks you write (the Script Task API form), the other is for pretty much everywhere else, e.g. in settings values as originally highlighted in green by you in your original question.

I am calling the Workflow from XSJS. But it’s giving me 302 response. What I need to do in this case?

Thanks for you blog. I have a similar scenario to generate the URL of the Portal inbox App. Is there any way to do similar to your blog by creating 3 destinations for each for Development,Quality and Production and then consuming the URL using environmental varaible.If so which values should be provided in the Path,Request Varaible and Response Varaible ?