In the previous parts of this series of tutorials, you learned how to develop your own Pipeline Operator without the need of bringing an own Docker environment. In this the tutorial, I explain how to integrate a custom Dockerfile into the SAP Data Hub and how to use this Dockerfile in a custom operator.

This is the third article of a series of tutorials:

Create an Operator with own Docker File

In the following, we create a custom Python operator “Stock Price Reader” which reads stock prices from a public API.

Python is a programming language which is natively supported by the pre-shipped Python base operators. This means that the SAP Data Hub pipeline engine is capable running Python scripts natively without the need of providing your own Python environment and there is an API available which allows you to integrate your own Python code, reading configuration parameters and connecting to ports without the need of messing around with process execution and the handling of arguments. The Stock Price Reader requires a specific Python library that is not included in the Python standard library and therefore requires a custom Docker image that provides Python with that library.

It is worth mention that there is a pre-shipped HTTP Client Operator that could be used to achieve the same. Nevertheless, we use this simple example to demonstrate the Docker-based extensibility concept of the SAP Data Hub.

A Docker image is described by a Dockerfile (https://docs.docker.com/engine/reference/builder/), which is a text document that contains all the os level commands required to assemble a Docker image. In the SAP Data Hub, all the pre-shipped and also the custom Dockerfiles are stored in a repository together with the operators and pipelines (graphs). In the following, you learn how to create a Dockerfile in the SAP Data Hub Pipeline Modeler which is later used in our custom operator.

To separate your Dockerfiles from the pre-shipped Dockerfiles, create an own root folder in the Docker Files section: 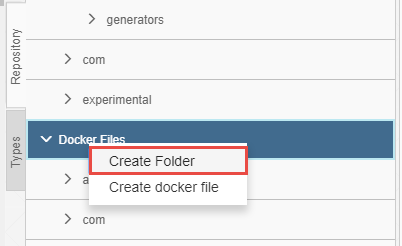 Next, create a subfolder in the root folder for categorizing your Dockerfile: 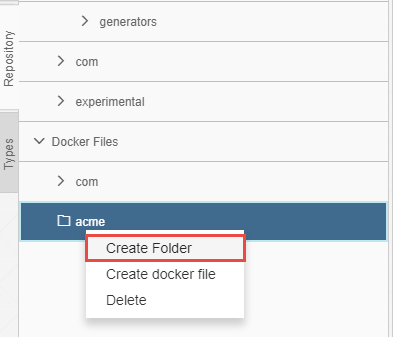 Now, we create a Dockerfile that will be used when running your custom operator. 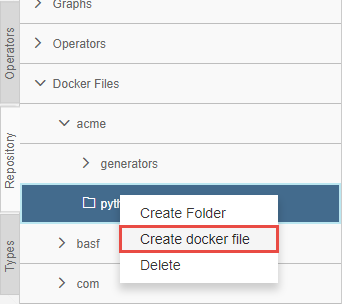 A new tab opens where you can describe the details of the Dockerfile.

Next, provide tags for the Docker image to describe its properties: 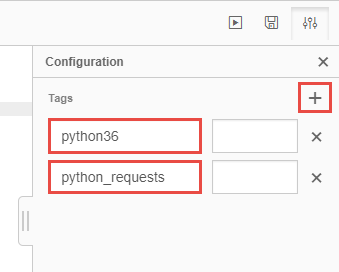 You can monitor the status of the Docker build process from the Log tab in the bottom pane: 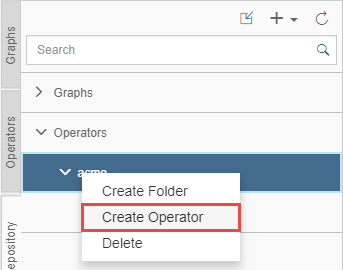 The Python3Operator allows us to run inlined Python code or an attached Python script. 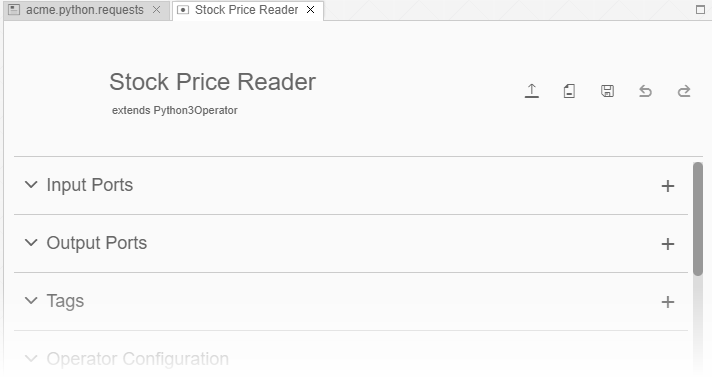 2.2. Define the Input and Output Ports

This port will be used later to pass a stock symbol to the operator and to trigger a request for the stock price.

The Tags describe the runtime requirements of the operator and allow to force the execution in a specific Docker image instance whose Docker file was annotated with the same Tag and Version.

In our case, we require Python version 3.6 and the Python library “requests” which is not included in the Python standard library. Both are provided by the Dockerfile which we have created before.

If the Python standard library would be sufficient, we could also skip adding additional Tags to our operator. Python 3.6 is already provided by the pre-shipped Python36 Docker image that is used by the Python3 Base Operator from which we derived our custom operator.

In the Operator Configuration section, you can find already one Parameter “codelanguage” that was inherited from the Python3Operator. It is not possible to remove the inherited Parameters, but you can change their default values.

You can generate (Auto Propose) a Type from the Parameters that allows adding additional semantics on top, such as validation of the parameter values, UI helpers, the definition of Enums as well as re-use in other operators. However, we do not make use of this feature in this tutorial.

In the Script section, you can provide your own Python script in two different ways:

In this example, we go for option (2) and upload a file containing a Python script.

This will by default reference and create a file script.py in the Repository as shown on the right side of the Script editor. All the code written into the Script  Editor will end up in this script which can be accessed from the Repository or disk.

In our case, we will create an own Python script locally and upload this to the Repository via the Script Editor.

The script mocks the Python pipeline API, which allows to use and test the Python script externally. The wrapped function request_stock_price does not contain any pipeline dependencies and represents our actual custom code.

The Pipeline Modeler uploads the file to the Repository, references the script in the Operator definition and shows the content in the Script Editor: 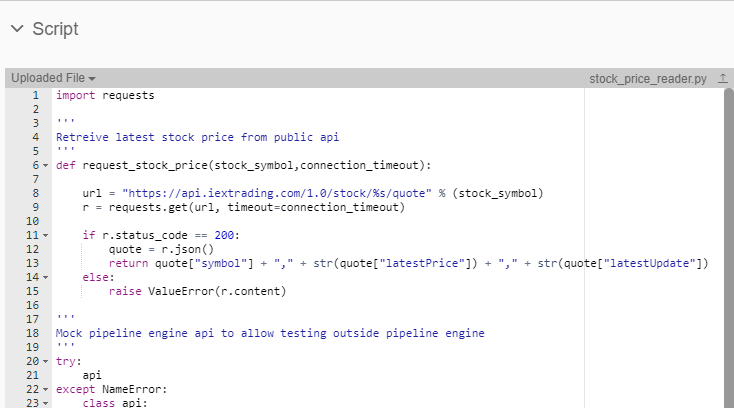 When you now change the code in the Script Editor, it will be changed in the stock_price_reader.py file, although it appears like an inline script.

A default operator display icon is used when you create a custom operator. You can change the icon within the tool or upload your own icon in Scalable Vector Graphics (SVG) format.

The tool uses the new icon for operators when it displays the operator in the Pipeline editor:

2.7. Maintain Documentation for the Operator

Open the System Management application (vsystem) in the browser.

The result shows all files that are stored together with the operator in the Repository.

From the same UI, you can download the corresponding files as .tgz-file via Export Files and import the .tgz-file data via Import Files into another Data Hub instance.

4. Use the Operator in a Pipeline

In the previous tutorials, you have already learned how to create a pipeline by adding and customizing existing operators. In the following steps, you will learn how to define a pipeline by copying a pipeline JSON definition. 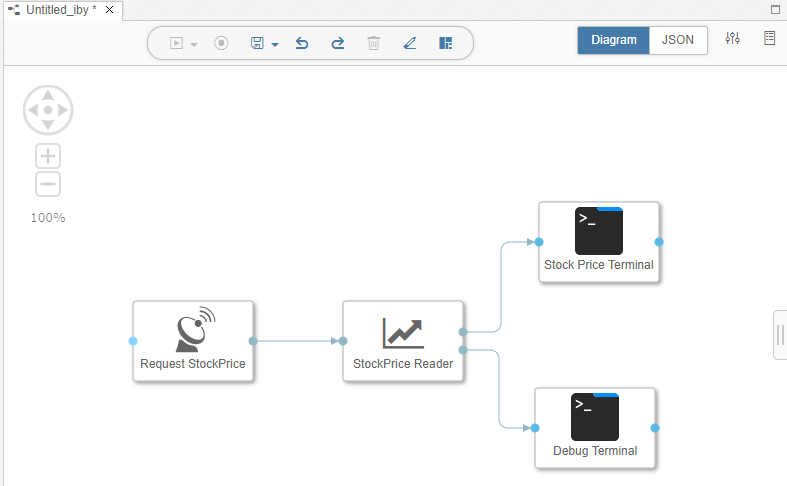 The pipeline uses the Stock Price Reader operator that you have created previously.

Congratulations, you have reached the end of this tutorial.

People like to read information that can serve simultaneous functions. This blog motivates and give information. So, it is a well attempt to fulfill the queries about SAP.

Why not execute the pipeline?

Thanks for posting Jens - A great tutorial.

I have followed your instruction in the blog to add "flask" for python to the docker file and used it in Python3Operator using Group Option (right click the operator) and then associate the flask tag + version in the configuration panel. Now when I run my graph I keep getting the following error:

“.Python3Operator: operator.com.sap.system.python3Operator.inst_id=python3operator1: An error happened while executing com.sap.system.python3Operator:python3operator1: Error while executing script in Python Operator: No root path can be found for the provided module "builtins". This can happen because the module came from an import hook that does not provide file name information or because it's a namespace package. In this case the root path needs to be explicitly provided"

I was able to run my code on my laptop without any issues.

Let me know if you have encountered such issue earlier and any suggestion to resolve this issue ?

I haven't seen this error before, maybe it is caused by different Python or Flask version used locally on your laptop and within the pipeline engine.

I am trying to create a Docker File in the SAP Data Hub Pipeline Modeler. I have created the folder and gave a name for my Docker File.  The Docker File Build is started, but i am recieve an error that the docker image cannot build because "Cannot connect to the Docker daemon at unix:///var/run/docker.sock”.

Do you have a suggestion to resolve this issue?

Great blog thanks Jens! - I'm using DH 2.5 and the above steps work well, the only additional thing I had to do was add tornado to the docker file and tags.

I am using version 2.5 of datahub.

Even after adding the tornado tags on docker file and operator, I get

next to the tag, you also need to add the library to the Dockerfile as follows:

I have updated the blog accordingly.

Thanks for the heads-up.

Or, instead of the python:3.6.4-slim-stretch, use the proper SAP-provided python base images. Instead of

. This way, you guarantee that all libs pre-required by SAP (requests, tornado or any future one) are already there, and you just add your custom libs you need for your custom operator.

It’s prebuilt by SAP and delivered as an image in the docker repo (e.g. ECR in case of AWS) and not as a dockerfile. But it doesn’t have any zypper repos defined. This was working in 2.5 and 2.6:

But I heard they’re removing zypper from the opensuse images due to some open source license requirement, so I wouldn’t rely on it too much… And long term I believe the plan is to switch from opensuse to SLES, so it shouldn’t be a problem for too long.

I get the following error…

But this combination works without errors..

And I used the toronado 5.0.2 tag explicitly to get my operator/pipeline to work

$com.sap.opensuse.python36 package may not be fully tested yet for all scenarios

pip is not directly available in the opensuse image. And even for the com.sap.python36, it should be pip3 (or else you might be installing it on python27).

On the opensuse image, you can do this:

on SAP data intelligence when using any of the prebuild SAP python images, I get this error when running thy zypper command:

“ERROR: zypper was removed due to licensing reasons.
It depends on ‘rpm’ module, which is licensed under sleepycat”

However, it seems that the installation of e.g. c compilers etc needs the zypper command.

Is there a way to resolve this issue ?

I am having the same problem