How to troubleshoot high latency networks for SAP Cloud for Customer

This blog will help you to determine if your SAP Cloud for Customer experience is affected by high latency and where, but first let’s get some concepts:

Latency is how long it takes for the data to travel between its source and destination, measured in milliseconds.

One of the ways to optimize network performance is to minimize latency across the entire network. Packets travel across networks at a speed slightly slower than the speed of light. A rough estimate of the speed packets travel would be about 100,000 miles per second. Although the speed is still very fast, a packet that has to travel to the other side of the Earth and back would have at least 250 ms of latency (before you calculate latency introduced by routers)

For SAP Cloud customers, is possible to validate routing of the last mile, using the command “tracert”. This identifies the route that is used to connect to the Akamai server and with this helps to understand if the network packages are traveling to other regions or countries which could be adding overhead and might require a closer look by the network administrators or ISP. For example:

The format of each line is as follows:

For Cloud for Customer the following latency guidelines have been established:

Geolocation: Via the geolocation you are capable to deduce the location of a device connected to the Internet. The identification of a device’s IP address can be used to determine the country, city, or post/ZIP code.
The geolocation information is included on the traceroute but can be fetched from different online tools like the link below. This information is key to be able to troubleshoot bad routing. 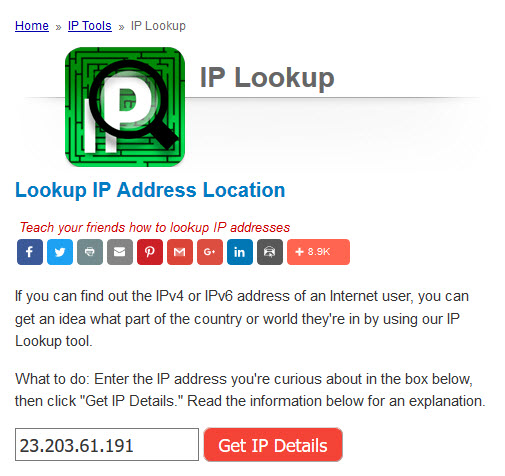 It is important to mention that different tools use different geo database and results could be different due to outdated database, it is recommended to get geo location information from different sources.

With the geolocation information, you can determine the location of each one of the IP’s and determine the route a user is taking to connect to C4C.

A bad routing can create a lot of latency and sequentially a slow behavior of C4C.

In this example, a customer located in Spain connects via VPN to the Australian office and tries to connect to their application located in Germany. As you can see the customer’s request goes around the world (Melbourne, Sidney, California, New York, Hamburg, Frankfurt) to connect to a datacenter in Rot, Germany generating a lot of latency and negatively affecting the user experience

Because the traditional traceroute uses either UDP or ICMP ECHO packets with TTL (Time to Live) increments of one, there will be times where the hop information will be blocked by a firewall or any other security policy making it impossible to completely trace the path to the destination. Tcptraceroute helps us to solve this problem by routing its packets using TCP. By sending out TCP SYN packets instead of UDP or ICMP ECHO packets, tcptraceroute is able to bypass the most common firewall filters.

tcptraceroute is included by default in most Unix based distributions. On OSX you will need to install it via homebrew (http://brew.sh/) by running the following command

Windows does not include a way to run TCP traceroute. Luckily someone was kind enough to write a version that works with Windows. In order to run tracetcp on Windows you will need to have the WinPcap library installed. You can find download links below the screenshot.

Thanks for another excellent blog !

BTW, On a Mac it is also possible to run traceroute on a Mac using the Network Utility app >Traceroute Tab .

Network Utility app is no more available in the latest Mac OS X. Its been deprecated.