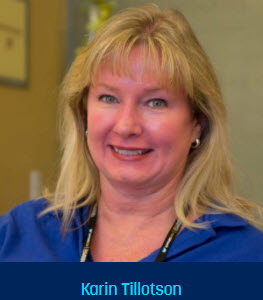 Great ASUG volunteer and a great SAP Mentor Karin Tillotson posted this on twitter this week: This is a big loss, in my view, to ASUG and the community.  For sure I understand and appreciate the rules of paying dues for membership; I am also a Certified Public Accountant after all.  I wanted to publicly thank Karin for all her service and work to ASUG and also mentoring me in both the SAP Mentors, ASUG volunteers, and having my back as a friend.

As ASUG volunteers plan their way to ASUG volunteer weekend in Nashville this coming week, I am very sad that Karin will not be there.  I believe she has been at every volunteer meeting I’ve attended.

I started volunteering with ASUG in 2007, unsure of where to go or what to do.  In my first year, I was responsible for webcasts; how many did I do in my first year?  None.  Then in 2010 our SAP point of contact at the time, Ingo Hilgefort, insisted we start up ASUG influence councils.  At the time, I thought it was going to be a big pain and I did not want to do it.  Ingo asked Karin to help us start up some ASUG influence councils, and show us what to do, how to set them up and how to conduct them.  As a result, ASUG BI has had some 9-10 very successful influence councils over the years and they continue today.  To me ASUG Influence Councils are the best benefit ASUG has.  Thank you, Karin, for helping the ASUG BI volunteers.

Karin has spoken at an ASUG TechEd and ASUG Annual Conference sessions before, sharing her knowledge, something a Mentor does.  I located this from an ASUG BI 2009 Newsletter that one of our volunteers wrote:

Karin has also spoken at ASUG Annual Conference about archiving.  A co-worker of mine, who did not know archiving, returned from attending her session and sounded very knowledgeable about the topic.  This is a true testimony of how much Karin has shared her knowledge over the years.

I Googled “Karin Tillotson” “ASUG” and found this ASUG session from 2003: 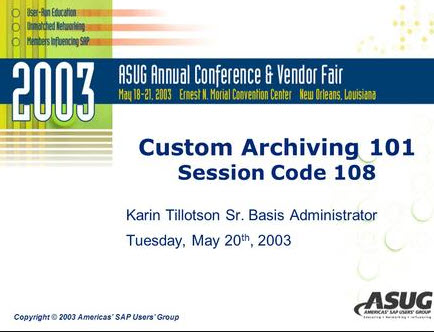 Here are some really great blogs by Karin:

Karin’s Version of The 12 Days of SAP Christmas

Floors and attics at #ASUG09

Karin has presented at almost every ASUG SAP TechEd session that I can recall and also hosted packed networking sessions.  So i would like to acknowledge Karin for being a standout ASUG Influence leader and a valued volunteer, contributing her personal time for 15 years to contribute to ASUG.  Her hard work and dedication has helped ASUG deliver successful customer-driven education.  Please join me in saying “thank you” to Karin.

I say “au revoir” in the title as in French it means “until we meet again” – it sounds better than “goodbye”.  Karin will be attending ASUG Annual Conference/SAPPHIRENOW in June, so we’ll see her again. 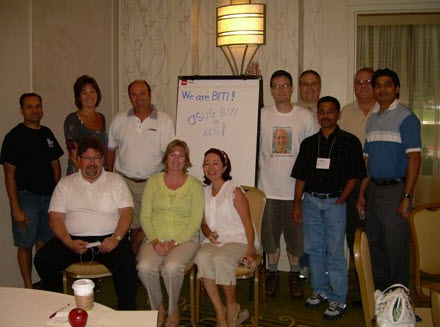 Tammy, thank you for paying tribute to Karin's outstanding dedication and passion - even if it is for Archiving ;-).  She deserves all of our thanks!

Thank you Karin!   You are amazing.   I would recommend co-workers go to your sessions simply because you were giving them.   I also tried going as much as possible.

It's incredible to talk with someone so very excited about what they do!    You know so very much I listened to the  many questions that you answered.

Thank for taking the time to write this, Tammy! I know that we will miss Karin on the ASUG side of things, but hope to see her continue her community spirit wherever the journey takes her!!

This is actually quite shocking to me....and a HUGE blow to ASUG in my opinion. I have always been a "fan from afar of Karin" (and not so afar as a Mentor). She might not be a part of ASUG going forward, but I highly doubt that changes her unselfish, giving/sharing personality....it will just be re-directed elsewhere.