Why did I write it? Well, lots of reasons. Here are some sensible sounding ones:

Here are some more fun ones:

This last reason is important to me – there’s so much choice across different platforms (SCP, GCP and beyond) for design-time and runtime for solutions that unless you try things out it’s hard to make informed decisions.

(Note: in the following post, some lines – code, URLs, etc – have been split for readability.)

The idea is that I will want to initiate workflow instances from various processes, and want a simple way of doing that with the minimum of fuss. As far as protection goes, I’m using a simple shared secret, in the form of a string that the caller passes and the receiver verifies before proceeding.

I also want to write and forget, and do it all in the cloud.

Before proceeding, it’s worth spending a minute on what Google Cloud Functions allows me to do. I can write serverless functions (similar to AWS Lambda) and maintain the code in git repositories stored on GCP (similar to how git repositories are available on SCP). I can write a function in JavaScript, within a Node.js context, availing myself of the myriad libraries available for that platform, and I can test it inside a functions runtime emulator before deploying it to GCP using direct references to the source code master branch in the git repository.

And yes, I edited and tested this whole project it all in the cloud too, using a combination of vim on my Google Cloud Shell instance, and of course the SAP Web IDE. After all, we’re surely in the 2nd mainframe era by now!

Anyway, who knows, in the future I may migrate this proxy function to some other platform or service, but for now it will do fine.

The entry point to a Google Cloud Function is an Express-based handler, which like many HTTP server side frameworks, has the concept of a request object and a response object. For what it’s worth, this simple pattern also influenced the work on the early Alternative Dispatcher Layer (ADL) for the ABAP and ICF platform.

The way I write my functions for this environment is to have a relatively simple file, exporting a single ‘handler’ function, and then farm out heavy lifting to another module. The Node.js require/export concept is what this is based upon. We’ll see this at a detailed level shortly.

I’ve always wondered whether it’s better to show source code before demonstrating it, or demonstrating it first to give the reader some understanding of what the code is trying to achieve. In this case the demo is simple and worth showing first.

First, I’ll highlight where I’m using this proxy for real, in a fun experiment involving beer recommendations based on what you’re drinking, courtesy of Untappd‘s API, and presented within the SCP Workflow context: 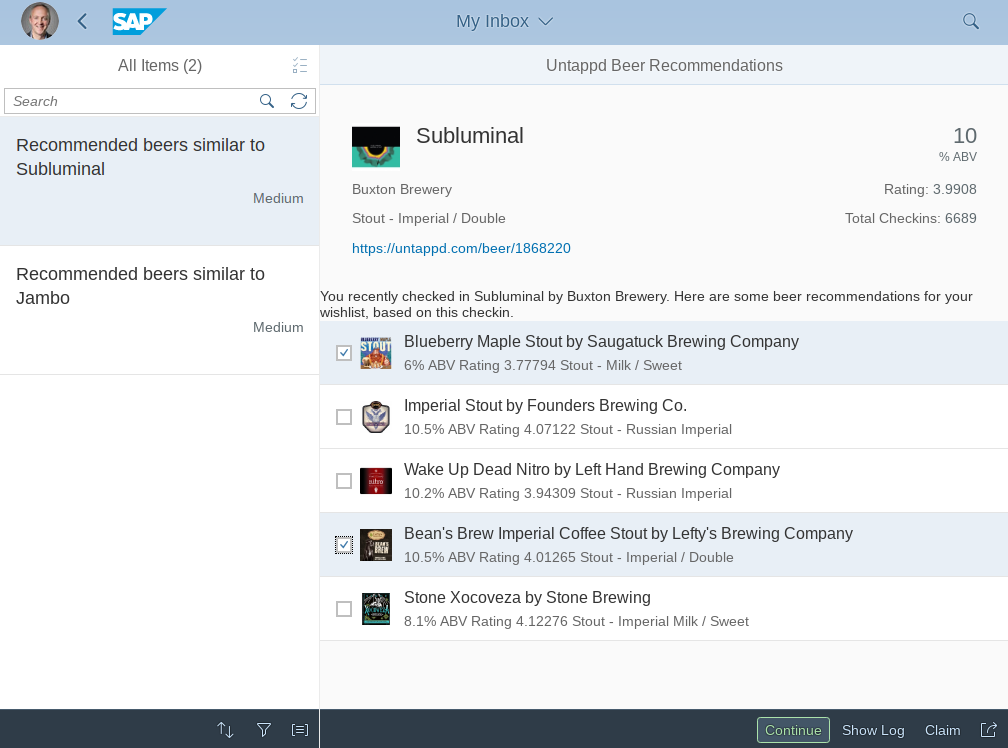 I have workflow definition called “untappdrecommendation” which I initiate instances of when another mechanism sees that I’ve checked in a beer on Untappd.

That mechanism is a Google Apps Script that polls an RSS feed associated with my Untappd checkins and notices when I check in a new beer (I did start by looking at using IFTTT for this but my experience with it wasn’t great, so I rolled my own). Once it sees a new checkin, it uses the Untappd API to grab relevant information and then calls the Workflow API, via the proxy that is the subject of this post. Here’s an excerpt from that Google Apps Script:

Let’s look into what that initiateWorkflow function is doing:

*some folks call them objects … I prefer to call them maps if they’re “passive” (if they have no other methods other than the JavaScript object built-in methods). The term map is used in other languages for this sort of structure.

Note that the ability to call the initiateWorkflow function just like that, and to only have to make a single call to UrlFetchApp.fetch (to make a single HTTP request using a facility in the standard Google Apps Script class UrlFetchApp), is what I was meaning with “simple” and “minimum fuss”. I’m not having to deal with XSRF tokens, nor wonder whether I need to manage the token’s context between calls either.

Stepping out of the Google Apps Script context for a moment, let’s see what it looks like when I use that proxy function by hand, with curl.

First, we’ve got a file, context.json, containing the beer info to be provided to the newly minted workflow instance in the form of context:

We’ll send that file as the body of a POST request thus:

Here’s what we see:

This results, in the creation of an instance of the “untappdrecommendation” workflow definition which appears in My Inbox as shown in the screenshot earlier.

Now that we’ve seen what’s supposed to happen, it’s time to have a look at the JavaScript code. It’s in two files. First, there’s index.js, which contains the entry point handler which is invoked by the Google Cloud Functions machinery.

As an aside, it’s this entry point handler which is referred to in the package.json which describes, amongst other things, the incantation to deploy a function to the cloud. Here’s package.json, in case you’re curious:

You can see that ‘handler’ (in index.js) is specified as the cloud function’s entry point in the deploy incantation.

Ok, so this is what’s in index.js:

It’s pretty straightfoward, with the handler function being the one that takes the pair of HTTP request and response objects, checks the token matches, and calls the initiateWorkflow function, accessing the definitionId and the context via the req.query and req.body mechanisms on the request object.

I’m not interested in what the Workflow API returns (if you remember from the previous post, it’s a map that includes the ID of the newly minted workflow instance, details of the definition upon which it’s based, etc). So I just return a simple string.

To keep things modular, the actual “heavy lifting”, if you can call it that, is done in wfslib.js, which looks like this:

Here there’s a single function defined and exported – initiate – which takes a series of parameters in a map (opts), determines the Workflow API root endpoint, based on the username and whether it’s a trial account or not.

I’m using the Promise-based HTTP library axios to manage my sequential HTTP requests, to avoid callbacks. First there’s the GET request to /v1/xsrf-token to request a token, and then there’s the POST request to /v1/workflow-instances to initiate a new instance. Inside the second call, I’m taking the XSRF token that was returned from the first call from the headers of the first response (res.headers[“x-csrf-token”]).

Note here that this being a more low level HTTP client library, there’s no automatic cookie handling as happens automatically in AJAX requests, or in Postman (see Discovering SCP Workflow – Instance Initiation and Discovering SCP Workflow – Using Postman). We have to exert a little bit of manual effort – joining together any cookies returned from the first response, using semi-colons, and sending them in the second request in a Cookie header.

That’s pretty much it. I have a nice simple function, running serverless in the cloud, which I can call with minimal effort to kick off a new workflow on the SAP Cloud Platform. Now I have that, I can go to town on the important stuff – making sure that my workflow definition fits the requirements and that the UI for the user task (making a choice from the recommended beers) works well and is available to handle the detail of the workflow item in the My Inbox app in the SAP Fiori Launchpad.

Next post in this series: Discovering SCP Workflow – Workflow Definition.

Excellent series of blogs. Top quality. I was thinking about using axios for the requests for my trials and there it is at the next part 🙂 It's about the SCP WF but it's not. Thanks for sharing every part ( tool / framework / platform ) of your discovery in a detailed and very well articulated way.

Thanks! Really appreciate you taking the time to comment, but also to read through the posts - it's a bit of a marathon! Glad you are getting something out of it. Good luck with axios!

I'll definitely finish it. Thanks again for sharing such a good content extracted from your journey.

I have a query - https://answers.sap.com/questions/12886469/response-302-found-while-accessing-bpmworkflowrunt.html