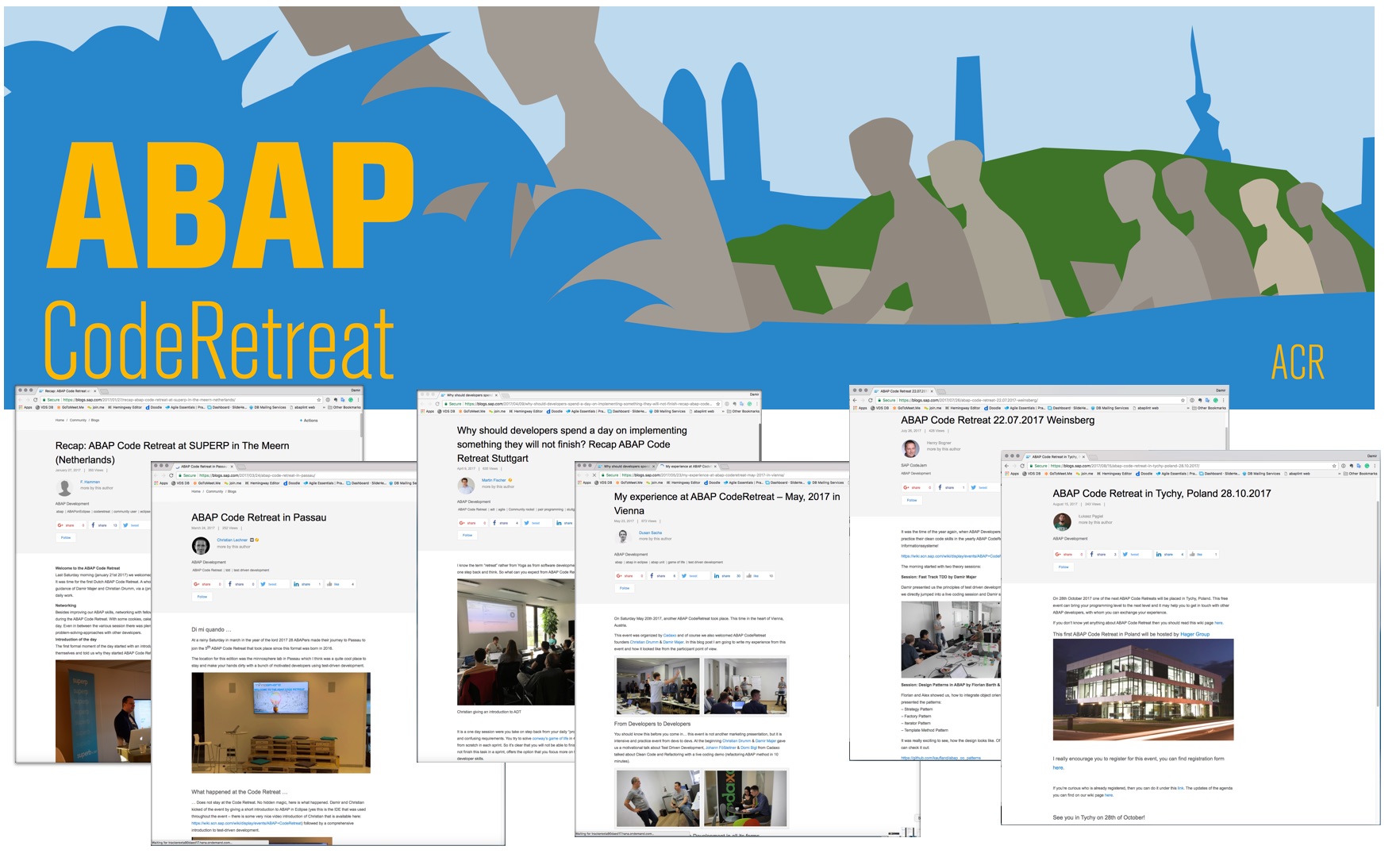 After the first attempts of the ABAP CodeRetreat (ACR) in 2016, the format got more momentum in the year 2017. We facilitated 8 free community CodeRetreats and 3 internal company CodeRetreats.
In addition to the public CodeRetreat’s for the community, companies have also used this format to try a different form of learning. The results were so motivating that…

we as a team (Christian and Damir) developed new concepts:

Especially the free community CR´s are important to us. We believe in concepts such as state-of-the-art development. And that does not fall into your lap. Topics like clean-code, clean-architecture, robust and extensible software are still modern and important. And a perfect way to getting with this in contact is our event format!

Personally, I’m very happy and grateful that Christian supports the idea and uses his spare time for the community and the events.

In January, it started with the ACR in the Netherlands. It was our first assignment outside of Germany and we saw the Dutch community as active and in many issues as a ‘first movers’.
Frank Hammen and his colleagues organized the event in de Meern and made it possible.
A detailed description can be found here: [Recap: ABAP Code Retreat at SUPERP in The Sea (Netherlands) | SAP Blogs]

In March it was almost a home game for me. In Passau, Christian Lechner invited to the event, and we found an international audience.
His report on the event can be found here: [ABAP Code Retreat in Passau | SAP Blogs]

Martin Fischer and his company had chosen April 1st as the event day. In the modern IT rooms, no wish remained open. Martin Fischer as organizer did not only shine as an organizer, above all he showed great personal commitment to make the event in Stuttgart possible.
Here is the recap to the event: [Why should developers spend a day on implementing something they will not finish? Recap ABAP Code Retreat Stuttgart | SAP Blogs]

Finally, it was time, and we had the opportunity to perform the ACR on May in one of my favorite cities. This is the beautiful city of Vienna and this was made possible by Johann Fößleitner. All participants were highly motivated and this energy has also inspired us, facilitators.
You can find a report here: [My experience at ABAP CodeRetreat – May 2017 in Vienna | SAP Blogs]

I like to visit the mountains in summer, so we owe it to Markus Reich that we were able to organize the event on July in beautiful St. Johann in Tirol!

With the event on July in Weinsberg, we finally made the first year of ABAP CodeRetreat full 😉 Yuppie … This time everything was well organized and the colleagues and the team around Henry Bogner contributed again to an outstanding event. The associated blog can be found here: [ABAP Code Retreat 22.07.2017 Weinsberg | SAP Blogs]

Hendrik Neumann was enthusiastic about the event idea from the beginning, and again it was a great Event in September. Next year maybe with a blog post again?!

In recent events, we have repeatedly received questions about whether we want to do such an event in Poland. Sure, we liked to tackle that and Christian only reported the best from the event in Tychy organized by Łukasz Pęgiel. Here are some details about the event: [ABAP Code Retreat in Tychy, Poland 28.10.2017 | SAP Blogs]

How do you organize an ABAP CodeRetreat?

– provide premises
– sponsor Drinks and Lunch
– Provide an SAP system, or the participants should bring their own trial system
– Find more sponsors, if you want to give away books or other giveaways
– Create a signup option
– Make the format known to the SCN (for example, on the acr.events page)
– Moderate through the event

We believe in that concept of learning by doing and exploring. And by the way, it is a lot of fun for you. And so far the feedback from all participants has been outstanding!

“The only way to learn is with examples” – Albert Einstein

Don´t hesitate and get in contact with us for the free community events or for internal events.