Multitarget Applications and Microservices – How Both Concepts Relate to Each Other

An often-asked question is how to use Multitarget Applications (MTAs) in the context of µServices-based architectures. In this blog, I show that the relation of MTAs to µServices depends on the concrete setup of development and deployment processes as well as how team responsibilities are assigned. There is a related blog which collates µServices and MTAs based on the definitions given by Martin Fowler et al.

For illustration, this blog restricts to the Cloud Foundry environment of SAP Cloud Platform as a target platform, but everything transfers to the Neo environment and SAP HANA XS Advanced (on-premise) as well.

The basic Cloud Foundry deployment unit is a “CF-app”. It is “pushed” to the platform, which results in the creation of a container with a suitable environment to run the CF-app artifacts. There is little metadata attached to a CF-app. More metadata would be helpful, however, to evolve and track an app through development and continuous integration/deployment, including quality management and staging processes. As an apparently trivial example, there is no well-defined ID and version of a CF-app. People are encoding all this somehow into the CF-app name, which in addition must carry the burden of encoding blue/green deployment status.

There are three main reasons (listed below), why application owners and developers are looking for appropriate metadata and tools based on this set of metadata. This lack is compensated by building a parallel code world of scripts for orchestrating and configuring CF-app deployments.

These three reasons are:

All these three aspects are covered by a declarative application model (the MTA model) that is persisted in descriptor files. For more information about MTA, see the document The Multitarget Application Model – A guide to understand multi-target applications.

A common misunderstanding is that an MTA would only make sense, if it would contain multiple components that get deployed as one unit. This composition aspect is only covered by item 1.) above. It makes perfect sense to describe single container apps via an MTA model to take advantage of items 2.) and 3.) above. Although the discussion below focus on the composition aspect of MTAs, don’t miss to consider MTAs as a means to develop and deploy even single CF-apps.

For the purpose of this document, we distinguish between development, assembly and deployment processes.

We are looking at the processes from development to deployment. As shown in the figure below, we are distinguishing three phases that lead to the creation of one deployable unit. Such a unit will be deployed using either a single cf push or a single cf deploy command, depending on whether MTAs are involved or not: 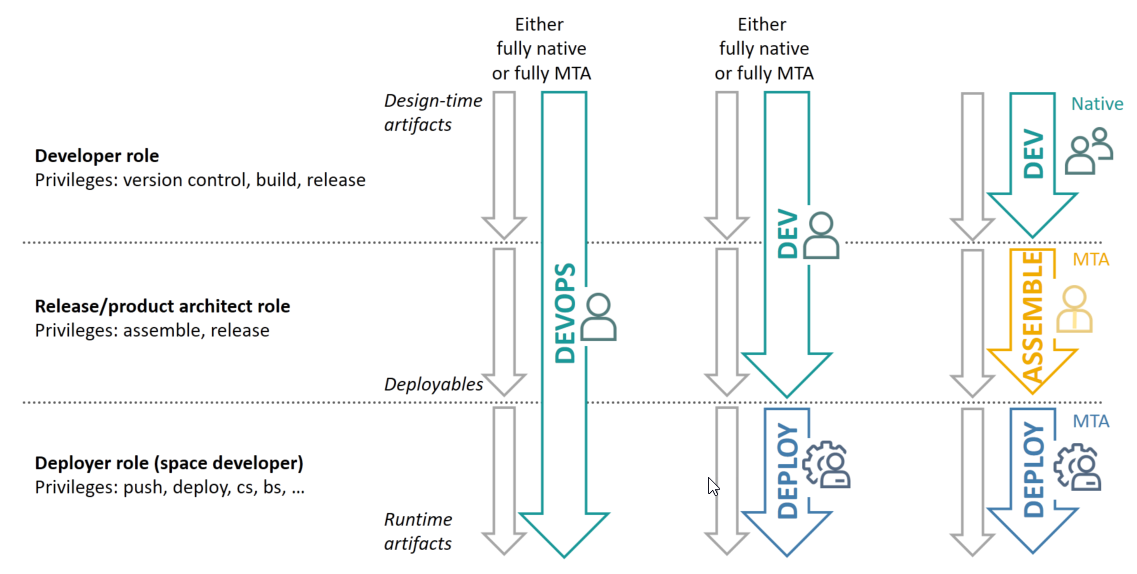 Figure: Process from development to deployment

The three vertical scenarios in the figure above represent different ways how these three phases are realized:

There is a fourth scenario (not shown), where the last two phases ASSEMBLE+DEPLOY are fused, because there is only one owner or tool which executed both phases.

For DEV+ASSEMBLE+DEPLOY, these units do not coincide. The least controversial interpretation then is probably the following: If each unit of development corresponds to one CF-app, then this unit/app should be called µService. However, there is an additional constraint, defined by the release/product architect. Although each µService could in principle evolve independently from the others, it was decided to co-deploy a group of services. This can represent the case ‘one MTA – many µServices’, if the deployment service is able to implement a selective restart strategy for parts of an MTA.

For cloud scenarios, we do not recommend to implement such a process, because it increases the likelihood to create inconsistencies and it detaches developers from deployment artifacts. The DEV+ASSEMBLE+DEPLOY process is typically applied for on-premise delivery of big packages of software.

With this blog, I hope you better understand how we see the relation of MTAs to µServices and how it depends on the concrete setup of development and deployment processes as well as how responsibilities are assigned. In addition, we discussed a set of patterns that shall serve as a guidance, if and how to introduce MTAs in a way to best match your application development and deployment processes.