In the first four parts of this series we had a look on:

This time we’ll have a look at the aBPM cockpit.

What is the aBPM cockpit?

One common requirement of customers is that they would like to

Based on these requirements aBPM provides the cockpit application. It’s a UI5 based viewer of existing processes with form and other process data. The processes can be filtered by generic (e.g. date) or scenario specific filters. The start screen looks like: 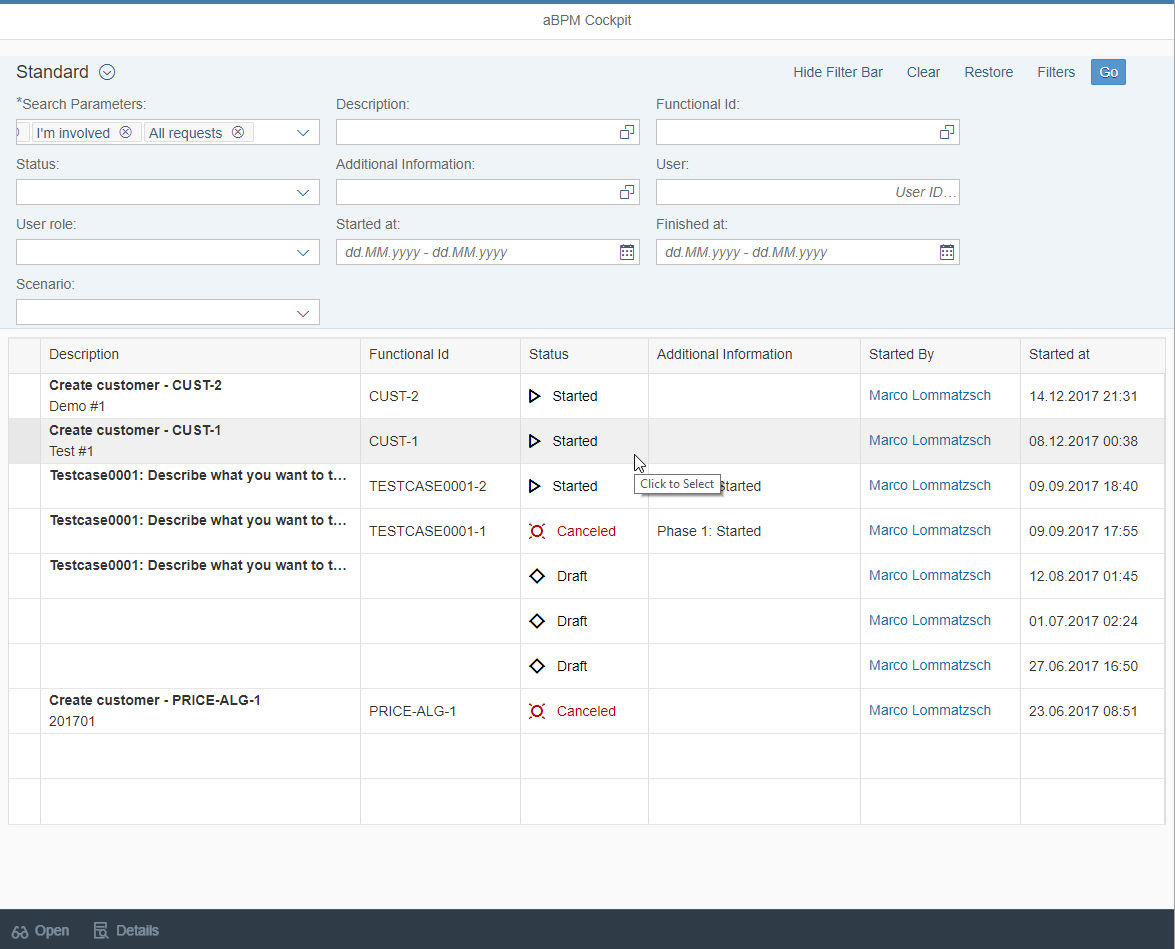 At the top of the screen you can see the filter area with the generic and scenario specific filters. Also it includes a collection of predefined combination of selection criteria named as “Search Parameters”. We’ll come back on this later on in this blog. It’s also possible to search via Id of the process, the user or begin and end date. If you restrict the selection on one scenario the filter will add scenario specific filter fields (if available). We’ll go into this also later on.

Below the filter area you’ll find a table with the selected processes. It contains all aBPM modelled BPM processes that matches the criteria. Beside the description, the functional Id, status, user and the starting date you’ll also see additional information. This field contains supplementary information about the process, in the given example some processes maintain the information about the state they are in. aBPM supports receiving the current state of the BPM process by providing methods in the callback interface that are triggered by BPMs JMS events (https://help.sap.com/viewer/6fc9ea54f6d3425183718b944038b882/7.5.9/en-US/4e263c830b92495c90415cc59de73b6d.html).

The toolbox at the bottom contains button to open the form (depending on the state in read-only or editable mode) or the details of the current selected form. The details contain multiple views: 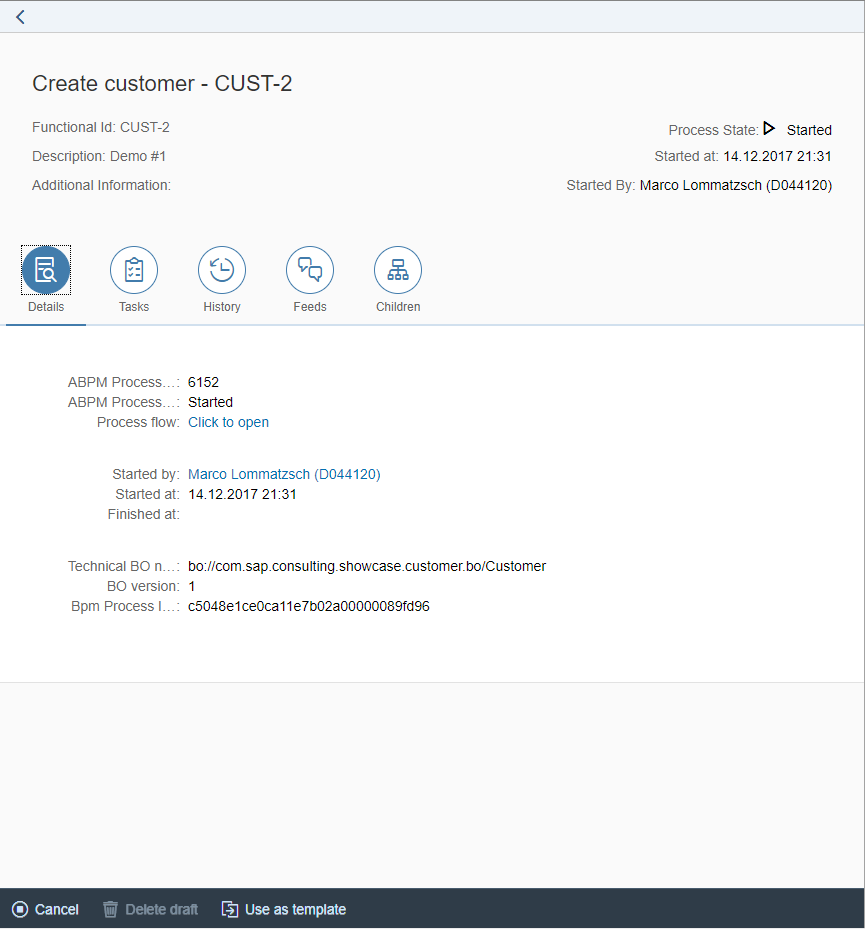 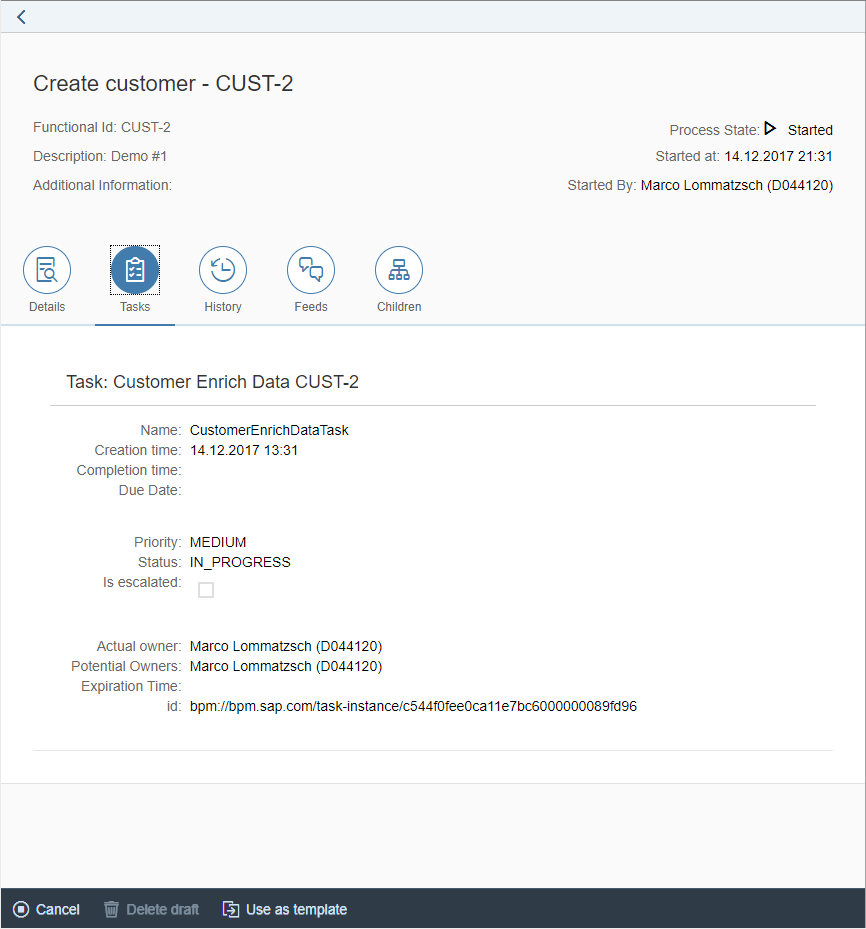 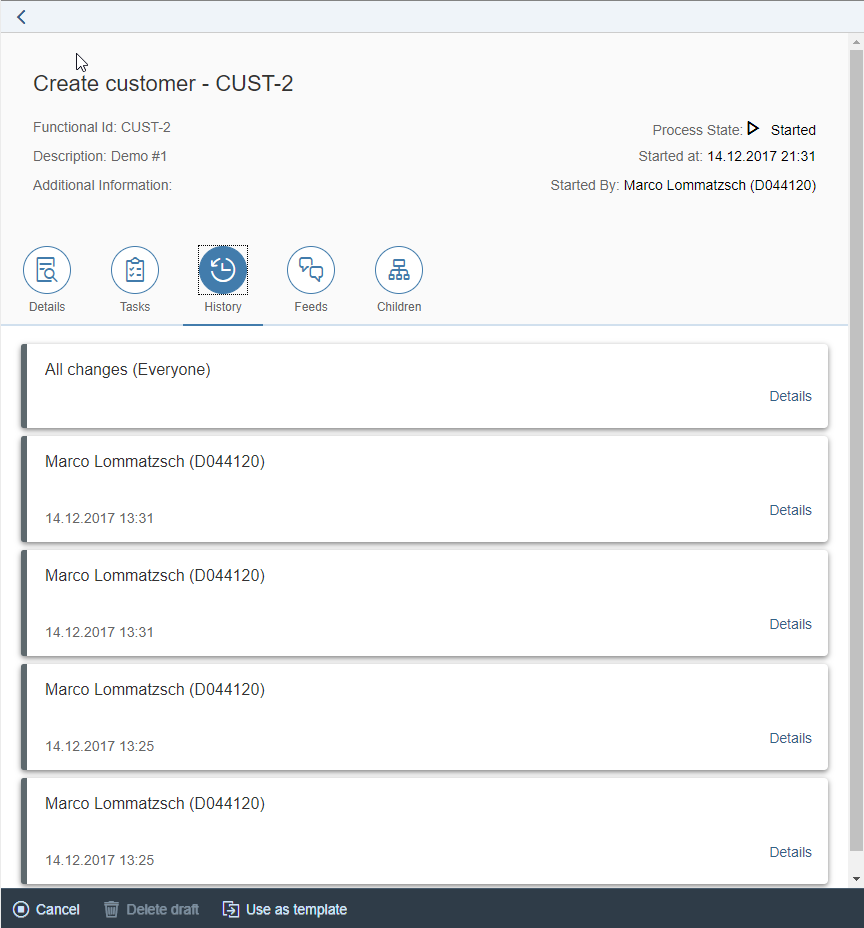 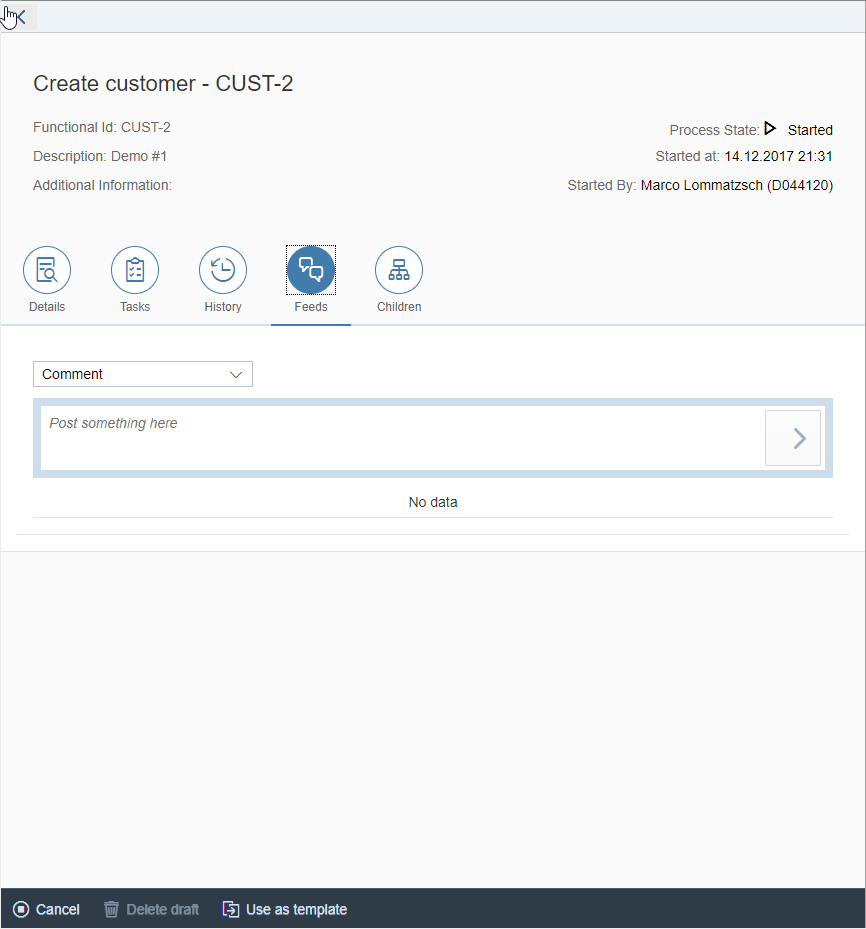 At the bottom of the screen you can see that the toolbox buttons also have changed. Now the following buttons are visible:

At the end of this overview you can see that aBPM’s cockpit is one central view of current running processes that allows inside in the form data as well as process execution. It’s also possible to cancel the process from there or use existing process forms as templates for new processes.

If you followed my blog series about aBPM you are not surprised that the cockpit can be adapted to your needs. As usual this is done via a callback interface that is implemented in Java.

As the cockpit is used by all scenarios at the same time, it’s not integrated into the scenario interface but has one of its own: It’s called ICockpitCallbackLocal:

As you can see it’s a simple interface with 2 methods:

Technically this is an interface defining a session EJB. If you need to adapt the default behavior (as usual, aBPM contains a basic implementation of the interface) you need to build an session bean that implements the interface and register it in the system properties (NWA) at the key “cockpit.callback.name” with its JNDI key.

The class that is used for both methods is SearchFilter. It contains information that help to manipulate the cockpit appearance. Some examples are:

As already mentioned it is possible to specify additional filter parameters for a certain scenario. These will only be shown if the user restricts the shown scenarios:

As this is a scenario specific feature it’s configured in the scenario callback implementation. The following steps are necessary:

The ISearchInformationProvider contains 4 methods, the getSearchFields defines additional search/filter fields that are added in the cockpit.

The other fields aren’t necessary for the cockpit filter and handle the display state for the standalone display application and the enable/disable state of the cancel button mentioned at the beginning of this blog.

The returned list of SearchField objects contains the necessary information for this, a possible simple implementation of this method – that adds one additional search field for a filed with technical name “CompCode” –  could look like:

Although this example is working properly it is missing translation and other aspects that are necessary for a real-live usage.

The last step to integrate the filter fields is to return the custom implementation in the queryInterface method of the scenario callback. The code for this looks like:

This blog gives an introduction of the aBPM cockpit and how it can be adopted to your needs. I showed some extension points that allow setting of default values, definition of predefined filter scenarios and additional, scenario specific filter fields.