Digital Transformation is not just a buzzword. It’s happening right before our very eyes and will eventually affect us all, one way or another. Despite the awareness, a recent study by Technical University Munich (TUM) showed that there is still an immense digital skills gap: “90% of the people surveyed agreed that the digital transformation is important for their business strategy, yet 64% said that their company did not have staff required for the digital transformation”. SAP strongly believes that new technologies such as Artificial Intelligence, Industry 4.0, the design thinking methodology, and Machine Learning should be incorporated in trainings offered to students, apprentices, and employees through collaboration of schools and companies across sectors.

Back in 2016, the European Commission established the Digital Skills and Jobs Coalition as part of the actions on the New Skills Agenda for Europe to promote cooperation among education, employment and industry stakeholders with one common goal: improving the digital skills of the wider population in the European Union (EU). SAP has long been supporting the EU’s goal, with Executive Vice President and Chief Knowledge Officer Dr. Bernd Welz being part of the Governing Board of the Digital Skills and Jobs Coalition which provides strategic leadership and gives high-level advice to the European Commission.

Moreover, SAP Next-Gen is a member of the coalition and has pledged to open 24 Next-Gen Labs and start 180 SAP Next-Gen Consulting projects by 2020 to support the closing of the digital skills gap. In addition, SAP will join the European Alliance of Apprenticeships, launched by the European Commission to strengthen the quality, supply, and image of apprenticeships in Europe. SAP will pledge to offer apprentices and students a vocational training or dual bachelor degree in Germany, Ireland, and Hungary in the areas of business informatics and applied computer science. 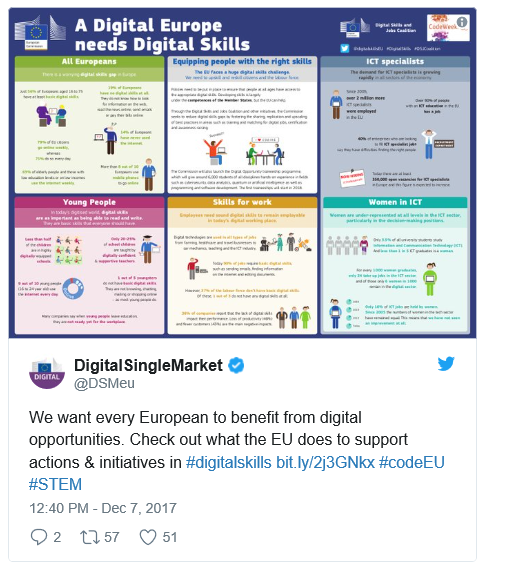 To raise more awareness as well as to look into the future of digital skills policy in the European Union, the Digital Skills and Jobs Coalition Conference was held in Brussels on December 7, 2017, for 450 participants. Mariya Gabriel, the EU Commissioner for Digital Economy and Society, gave a keynote speech outlining her vision for future digital skills policy in Europe. The Governing Board, where Dr. Welz is a member, worked on recommendations for EU Commissioner Gabriel, which were presented to her at the High-Level Roundtable organized during the conference.

SAP was prominently represented at the conference, with Thierry Siraut, SAP University Alliance Country Manager Belgium/Luxembourg, taking on the role of a speaker in a panel on the topic of “The future investments needed in digital skills.” The panel, which included a Member of the European Parliament as well as experts from Microsoft and Tallinn University of Technology, discussed issues such as the current and future digital skills gap and how to tackle this challenge, focusing also on the respective roles of the European Union, its member states, and of the private sector. Additionally, the European Digital Skills Awards 2017 ceremony was held during the conference. Dr. Welz was invited by the Commission to be part of the jury for the award, which aims at showcasing initiatives that develop the digital skills of Europeans in school, at work, and in society in general. 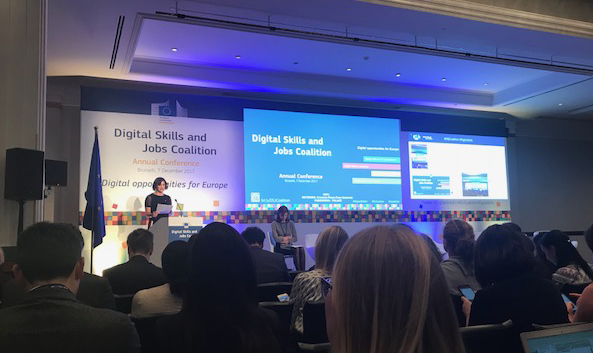 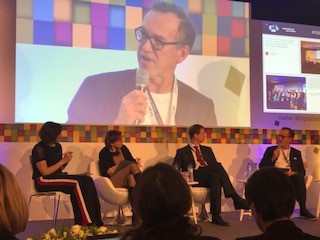 Here are some of the key messages from the conference:

In addition to the panel, SAP showcased various learning offerings at the dedicated SAP information booth. At the pod, SAP experts gave insights into a smart gardening module for schools, based on Snap!, a graphic coding language, and talked about how free massive open online courses  (MOOCs) from openSAP or offerings in SAP Learning Hub can help EU citizens upskill in preparation for the digital transformation. The 450+ participants showed great interest in openSAP, SAP Young Thinkers, and SAP Next-Gen, and were impressed by how SAP helps to increase employment in the EU by retraining people. 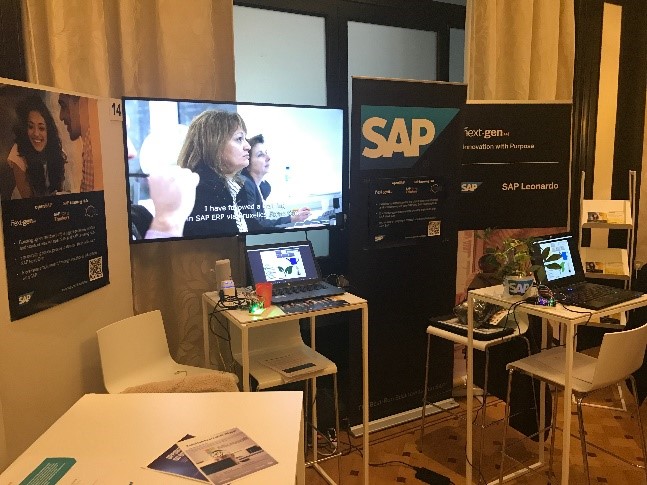 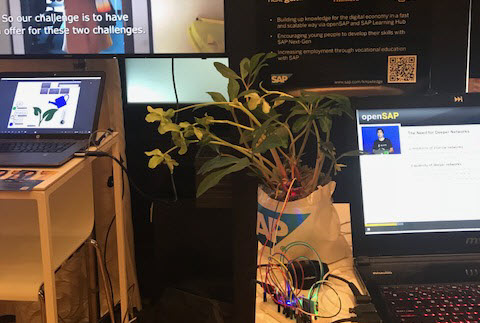 The involvement in the fight to close the digital skills gap, however, is not SAP’s only engagement with the European Union. SAP also partnered with the European Round Table of Industrialists (ERT) where SAP CEO Bill McDermott, is a member. Together with JA Europe, the ERT has launched a joint initiative called “Why Europe Matters.” The campaign is aimed at young EU citizens aged 16 to 25 and is comprised of a survey about Europe, their education and employment, and their ideas for the future. Young people from the SAP network, as well children of SAP employees can take a short survey in 9 languages.

In addition, 9 innovation workshops are taking place across Europe with the active engagement of SAP volunteers. The final European workshop and the high-level policy debate with EU Commissioners, MEPs, CEOs of the European companies and young people is planned for March 20-21 in Brussels – where the goal will be to bridge the gap between the decision makers and youth to make their ideas a reality.

Being part of this initiative shows that SAP is eager to not only tackle the current skills gap issue by helping to upskill people, but also to look ahead and try to find ways of getting to the root of the problem – that is, trying to minimize the potential for future skills gaps.

What are your thoughts on fostering skills to support the younger generation in Europe?

Ah --- the million dollar question.   Here in the states less college students are graduating with a STEM degree.   And the need for any and all STEM degrees is only growing.   Not even showing the statistic of how many available jobs can help.   Believe me I tried - my college son is going to be graduating with a political science degree with a major in international studies and a minor in European Studies.   If I can't convince my own son to get a tech degree.    How can I convince anyone?

My only thought is perhaps more free conferences during High School - here.   All the cool new technology that is coming into play should make more people actively seek technical skills.  AI is huge.   I can't believe it won't tempt the younger generation.

I really think this blog is probably relevant to all - not just Europe.   Or maybe the US and Europe are the only places where this is an issue.

You are absolutely spot on! I fully agree that attracting young talents to STEM degrees and topics is not only a major challenge in Europe - certainly also in the US.

This is exactly what the SAP Young Thinkers and Next-Gen Programs are trying to support with their activities, actively engaging with the younger generation at schools and universities. Many initiatives  may also be replicated for local engagements, like the "GoDigital Night", as well as hackathons in collaboration with major enterprises.

There are great examples also with regard to existing and planned Next-Gen Labs - for instance at Portsmouth Business School. These labs introduce students to innovations and technology through real world exposure to genuine business problems via Innojams, and design thinking.

I look forward to more inspiring ideas to further promote this topic!

I like the idea of the free conferences for high schoolers, plus the hackathons and digital events. Somehow the enthusiasm has to be nurtured for kids to really dive into computer science and STEM programs. My nine year old son is a huge YouTube enthusiast, and he's also pretty smart, but I don't think he has any clue how vast and fascinating the digital world is beyond YouTube. I keep waiting for something to spark in him. When I was a journalism and writing major at an applied technical university, I quickly understood that all my class projects revolved around software development and I was shown how to apply my writing skills to work with techies in cross-disciplinary teams. When my education concluded, I was really happy (and surprised) to realize that I had gained skills that were useful in the software industry. So, maybe we just need to keep nudging kids into STEM, even if they don't realize it's happening - because eventually every job will require a certain level of digital skills.

Thanks for including that SAP Next-Gen supports SAP’s initiatives to close the digital skills gap. As a global program, our pledge is not only for Europe but all global regions, where as a purpose driven innovation community empowered by SAP Leonardo, SAP Next-Gen leverages 3,360+ educational institutions in 111 countries that are members of SAP University Alliances to enable students, startups, and other learners to develop skills for digital futures. One focus for SAP Next-Gen in 2018 will be the global roll out the SAP Next-Gen Academic Community for SAP Leonardo which will enable faculty and students with learning resources on the latest SAP Leonardo topics including machine learning, Blockchain, IoT, big data, as well as other exponential technologies such as VR/AR, robotics, drones, etc. We look forward to collaborating across SAP in 2018 to support digital skills initiatives.