RPA for an ERP-driven enterprise

It’s an exciting time to be living in for tech enthusiasts. Never before had so many new technologies disrupted businesses and consumers alike. For enterprises, it presents a new set of challenges – the decision to choose which technologies to adopt and how much to invest in each. What makes the decision even more complex is the interplay and dependencies of these disruptive technologies with each other which makes it difficult to do a cost-benefit analysis of any of these technologies when viewed in isolation.

One of the hottest new development we are seeing is in the field of automation applied to business processes – Robotic Process Automation. Another technology that is poised to transform businesses is machine learning. I am not delving into the definitions of these since the internet is awash with literature explaining these in detail. (although if you are not familiar with these terminologies I would urge you to get a fair understanding of it before coming back to this article)

The primary focus of this article is to study the interplay of these relatively new technologies with two traditional enterprise software tools – ERP and BPM – and help businesses decide the right RPA tool in this context.

While RPA has already seen significant interest and adoption in transaction intensive processes such as back-office operations in banking and insurance, its adoption in processes driven by ERP systems has remained largely muted, especially considering most large organizations are run on ERP today. But this may be about to change. As increasing number of RPA vendors design solutions tailor-made for ERP software with special focus on SAP, the scope of applicability has broadened and the cost of ownership has reduced. In fact, the TCO of RPA and the time taken for operational and financial value realization is much lesser than ERP (although, admittedly, the scope is that much lesser too). 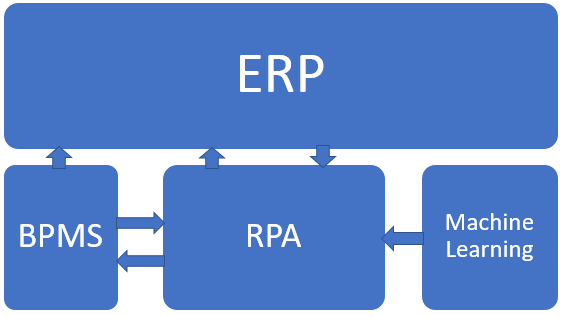 An organisation considering the use of RPA for ERP driven processes will be well advised to use it in conjunction with a BPM tool with a flexibility of extending it with machine learning.

The interaction between the systems can be explained as below:

Other pointers that must be considered before going for selection, or even decision, of deploying RPA for ERP-based processes are briefly stated below:

Robotic Process Automation is the next big wave of cost and process optimization after BPO. As mentioned earlier, the number of RPA providers designing solutions specific for ERP system is only increasing. An organization that wants to unlock the full potential of their ERP deployment should proactively consider using RPA for automating their ERP functions. The question that the CIO should, therefore, be asking now must revolve around ‘Which?’ rather than ‘Should?’