An easy way to message translation

With the current possibilities in the SAP Cloud Applications Studio it is not possible to translate in BODL defined messages.

The content of the message can be raised to the UI and also in to the run logs but not directly translated with the translation mechanics build on the BO.

To solve the problem you can generate an generic message with no direct content but with an placeholder for every text you want to enter.

Than later in the ABSL code on the place where you want to raise the message you set the text you want.

But this version has the downside, that you have to control the message texts and the translation with your ABSL code.

The better way is to use an translatable object in the studio to be able to raise the message according to the content of this.

In this texts you can place also placeholders which you want to replace during run time with dynamic data (e.g. IDs). 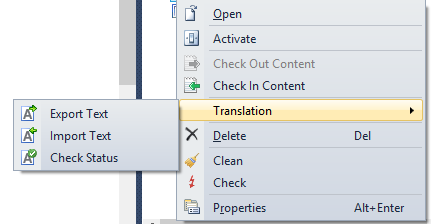 To raise this messages you can use this simple code.

To reduce the code for every message you can encapsulate this code you can put the code for the description loading in an reuse library, so that you have only inline code like the following.

Why use a BCO and not just a CodeList?

Only Benefit I can think of is the end user could change messages. (which I typically do not what them to do)

As you already mentioned one reason is that customers could change messages.

The other reason is linked to this topic that the customer can change and add the translation for the messages.

If this is not needed or planed in the future code lists would also work fine.

Well, we actually use the following code, since we usually need to support English and German:

This way is also working but has the downside of managing the translation for every message in the absl scripts where the Message is raised. Also one problem could be that every translation has to be implemented in the absl code and can not be added by uploading on translation file.