Fiori apps are web applications, which need a SAPUI5 library and a Fiori Launchpad and last but not least an “SAP Fiori Front-end Server” on which all runs on premise or need SAP Fiori Cloud for cloud deployment.

Classic SAP GUI and Web Dynpro applications using SAP Fiori theme need an AS ABAP in the backend, which supports SAP Fiori theme. This is only the case for AS ABAP 7.51 and higher for S/4HANA.

What is SAP Fiori Front-end Server?

First of all, it is just an Application Server ABAP.

Technically it is an Add-on to AS ABAP, delivering the right Service Pack Stack (SPS) definition (stack.xml) for AS ABAP, suitable for Fiori App deployment. 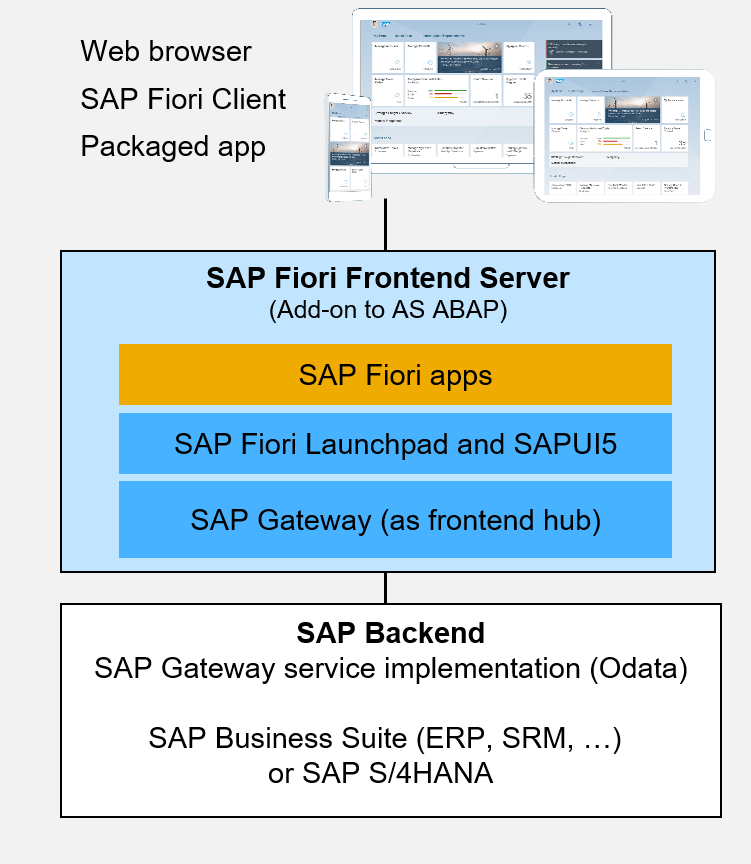 (Remark: AS ABAP for S/4HANA 1809 is not available as standalone installation)

FES defines the initial shipment stack (ISS) and service pack stack (SPS) for 2 AS ABAP software components independent from the AS ABAP stack.

The SAP Fiori Front-end Server version always defines exactly one version of SAP_UI. SAP_UI contains the innovation version and one maintenance version of the SAPUI5 library.

(For more information about versioning, see versioning of SAPUI5, and available SAPUI5 versions)

FES defines also the SAP_GWFND up to AS ABAP 7.51. The SAP_GWFND software component version has always the same version as the underlying AS ABAP but shares the Service Pack Stack definition with SAP_UI, which is defined in FES.

In hub deployment scenarios, the recommendation is, that the SAP_GWFND version of the FES should not be more than 3 versions higher or lower than the backend SAP_GWFND. 7.51 or higher is recommended for S/4HANA. 7.50 typical for Business Suite.

FES contains additionally the SAP software component “UI for Basis Applications“, the technical name “UIBAS“. In documentation, it is named “SAP Fiori Apps for SAP NetWeaver”. The target group is “key user for SAP NetWeaver”. These apps are mainly required for some S/4HANA Fiori apps and are only available for FES on NW AS ABAP 7.5 or higher.

The second additional component is SAPUIFT 100 (only one version available, SP01 max.). This component is deprecated and was removed in FES 5.0.

Upt to FES 3.0 it also provides “SAP_GWFND” . So these 2 components can be downloaded and implemented or updated independently from the AS ABAP stack definition.

If you want to “upgrade” your SAP_GWFND to a higher version, you have to upgrade the underlying AS ABAP to a higher instance. The highest possible SAP_GWFND and AS ABAP version is the SAP_UI version.

Fiori apps for S/4HANA are mostly bundled in one product version of SAP Fiori for S/4HANA:

you cannot deploy multiple, different SAP Fiori for S/4HANA product versions on one FES. Therefore you need for each product version on decicated FES.

Always use SAP Maintenance Planner for plannning updates and upgrades

Typical or “start of planning” recommendations for Business Suite backend system is: use FES hub deployment with AS ABAP 7.50 for FES.

Fiori for S/4HANA – Getting started with documentation

We want to know whether we can have the SAP Belize theme for launching classic Web Dynpro ABAP tiles from the Fiori launchpad without upgrading the SAP_UI component to version 751.

Thank you so much for the confirmation!

Meaning I cannot have a single FES with Fiori Launchpad to link to the same Fiori app (two tiles with different target alias) on different backend systems? What is your source for this?

You can use external links.

Currently what I understand is that FIORI Launchpad Site can be deployed on HANA XS directly from SAP Web IDE. Then we do not need 'SAP NetWeaver AS for ABAP' for running FIORI Launchpad on HANA XSA, since HANA XSA is the run time environment for Fiori Launchpad and FIORI Front End Server is not required. Is this understanding correct ?

If yes, then what would be the FIORI version and how can we use features of FIORI 2.0 such as Notification Centre.

FLP is available on many platforms. In general FES or SAP Fiori Cloud is required if you want to deploy SAP Fiori apps from SAP. For  a list see Fiori Apps Library.  I am not aware of any apps, which only need HANA XS and FLP, but I dont know all of them. Best you check the implementation information for your Fiori apps. Notification always require Gateway foundation 7.51 or higher (docu). Again, could be that there are meanwhile also other implementations, My focus is FES.

For custom development of Apps, using Fiori themes and/or design principles, you are of course free to setup your landscape as you need it.

We want to install ABAP in the frontend server and S/4HANA in the backend.

Would this be possible?

Thanks for your response Oliver.

I have a basic question on updating/upgrading a central hub FES. The connected backend system is a business suite that wont be updated at the moment.

The FES currently has v4.0 SPS02 and SAP_UI 752 SPS03. We have a request to update the FES "to the latest possible version". As far as I can see I could upgrade the FES to any new version, for example 5.0 or even 6.0 - BUT I'd like to know how to find out, which combination of FES-componentes makes sense with the current version of backend-componens in the business suite?

So how to I approach this update request (or in general) correctly without just blindy updating the FES to see what happens after? 😉

Regards + Thanks in advance
Daniel

sorry for the late answer and thanks for yours ?

What do you mean writing “WRT hub deployment take choose your AS ABAP depending on your backend version.”?

Unfortunately it does not really answer my question or am I misunderstanding you? I’d like to know how to well-fund approach an update request in general? Quite often customers request answers that are based on a SAP document or so.

Can you help me out on that?

General rule for the Appication Server ABAP on which the FES 6.0 in hub deployment case is deployed on, is: Take the same version as your backend has, but at least 7.51.

Conclusion, since on FES manuals there is nothing related with BW/4HANA, can we have and embedded FIORI SERVER of the BW/4HANA for BW/4HANA Cockpit as well BPC 11.1 FIORI apps or we should have a separeted FIORI server?