Product Cost Forecast and Simulation – how to enhance with tariffs

The related SAP Business Warehouse Content has been set to “obsolete”.
Please refer to SAP note 1929531.

This blog describes a concept how to enhance the SAP HANA-optimzed Business Warehouse content Product Cost Forecast and Simulation by tariffs.

The concept bases on the detailed product cost information, that the standard data sources can provide. SAP Business Warehouse modeling and business logic are covered in detail to explain the concept.

The blog contains the following chapters:

With the concept described in this blog, customers can implement the necessary enhancements to the standard content on their own.

A comprehensive understanding of the HANA-optimized Product Forecasting and Simulation content and the technologies being used – namely SAP BW on HANA and SAP HANA including SQL scripts – is required. Ideally, the standard content has already been implemented and is up-and-running.

The blog outlines a concept and supports this with proposals of how to model SAP Business Warehouse objects and SQL code snippets. Both modelling details and code snippets are used in this document to illustrate the concept but they are not intended to be used productively.

Please read the concept thoroughly and decide, if your business needs can be covered as described. As usually it is recommended to do a proper design before starting the implementation. Other best practices like separating the development from the production and thorough testing before going into production for sure also apply here.

The concept assumes that the proposed standard SAP data sources are used (0CO_PC_PCP_20 and 0CO_PC_PCP_30). Using other data sources is feasible, but in that case the concept cannot be used out-of-the-box.

Outline of the Concept

The data sources 0CO_PC_PCP_20 and 0CO_PC_PCP_30 can deliver the basic tariff information and the break-down of conversion costs into individual production process steps. Because the focus of the standard content is on material costs, the tariff information has so far not been used, but filtered out in the data load process. Consequently, only the content in the SAP Business Warehouse (SAP BW) and the underlying SAP HANA database need to be enhanced, no changes are required in the source system.

In general, the Product Cost Forecast and Simulation works as follows: 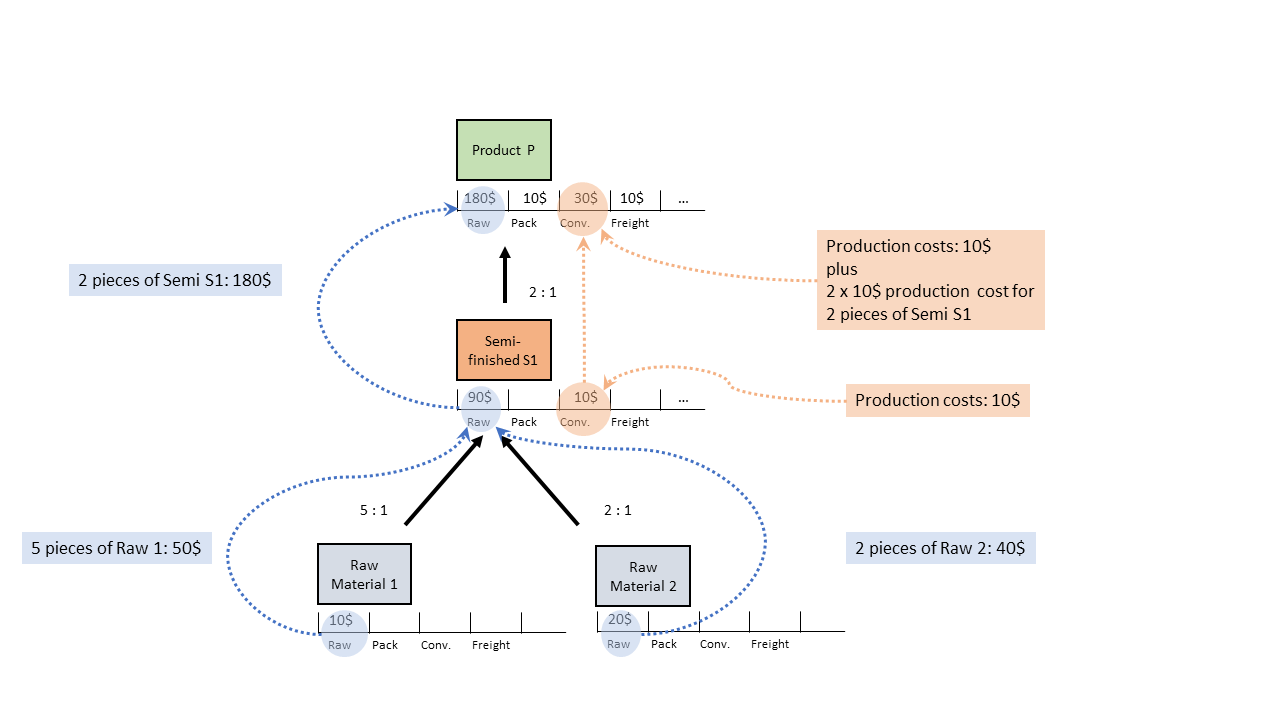 In this example, the two raw materials 1 and 2 cost 10 $ and 20 $ respectively. The costs are assigned to raw material costs. No other costs exist on this level, so the other cost components are not filled.

The raw material costs roll-up to the semi-finished good S1 based on the required quantities. The production of S1 costs 10 $, that are assigned to conversion costs.

Finally, the production of product P from 2 pieces of S1 costs 10 $ plus the conversion costs of 2 pieces of S1 to add up to 30 $. The raw material costs have been rolled-up and new costs (10 $ each for packaging and freight) are considered. 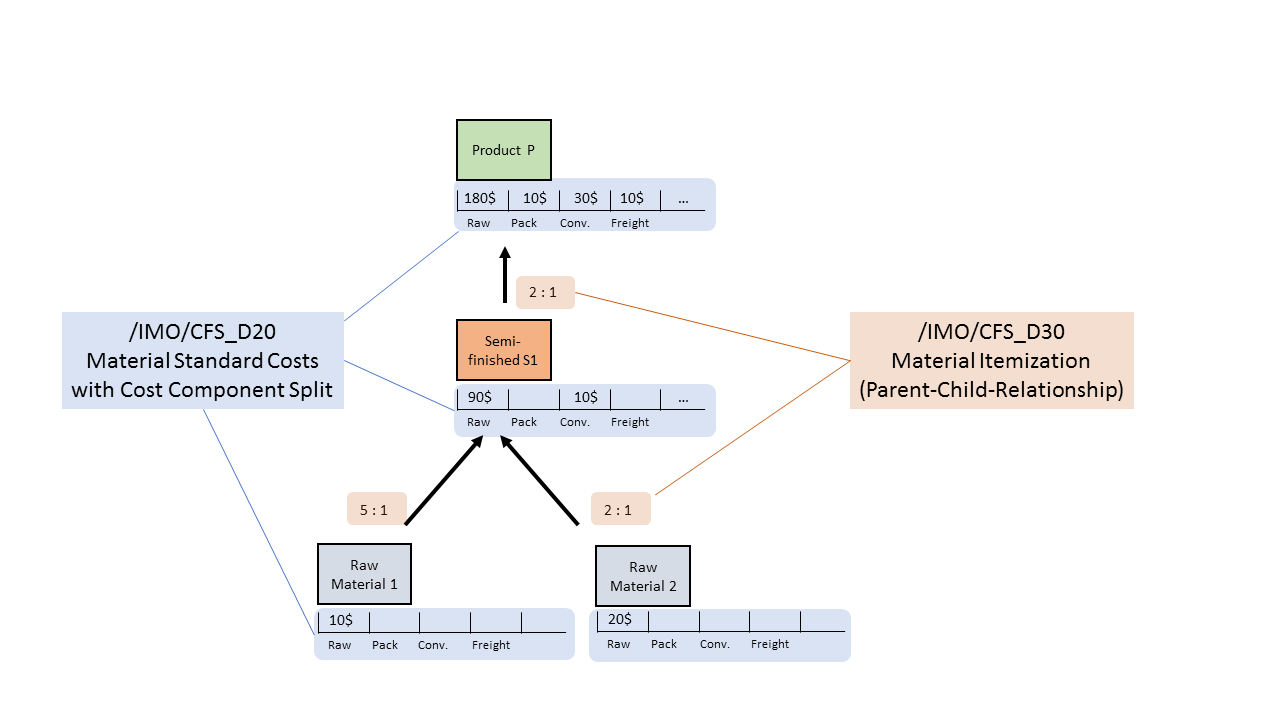 Diagram 2: Relationship of bill of material and data sources/DSOs

This is what the standard content currently covers. In the current example, the conversion costs that reflect the complete production process can be treated as lump sums.

While it is feasible to change the conversion costs in total, a differentiated view and a simulation of tariff changes are not offered. However, the data sources already deliver a break-down of the total conversion costs per material. The concept described in this paper aims to help implement a tariff-based forecast and simulation.

The total conversion costs can be broken down into several components – here manual labour and machine hours of two machines M and N. 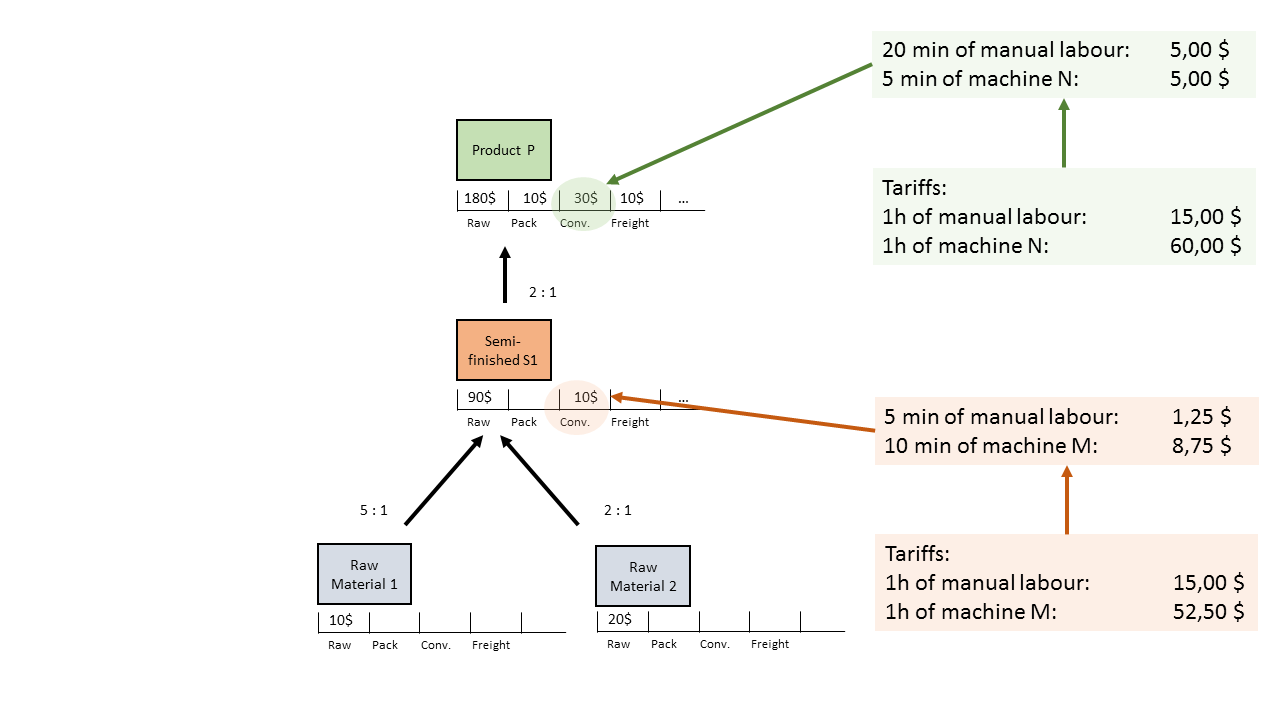 Remark: This is a simplification. In the standard content one could actually differentiate between semi-finished goods and products. For the sake of keeping the example easy to understand, this fact is neglected here. However, within the group of products or the group of semi-finished goods a distinction is not possible; but important for the same reason outlined here.

What needs to be done to achieve this break-down?

In our case, changing the hourly wage from 15 $ to 16 $ is an individual change. Changing the machine hour tariffs for both machines M and N because of an increase of the energy costs is a driver-based approach, changing several tariffs by one driver (energy costs).

The required changes are shown in Diagram 4: 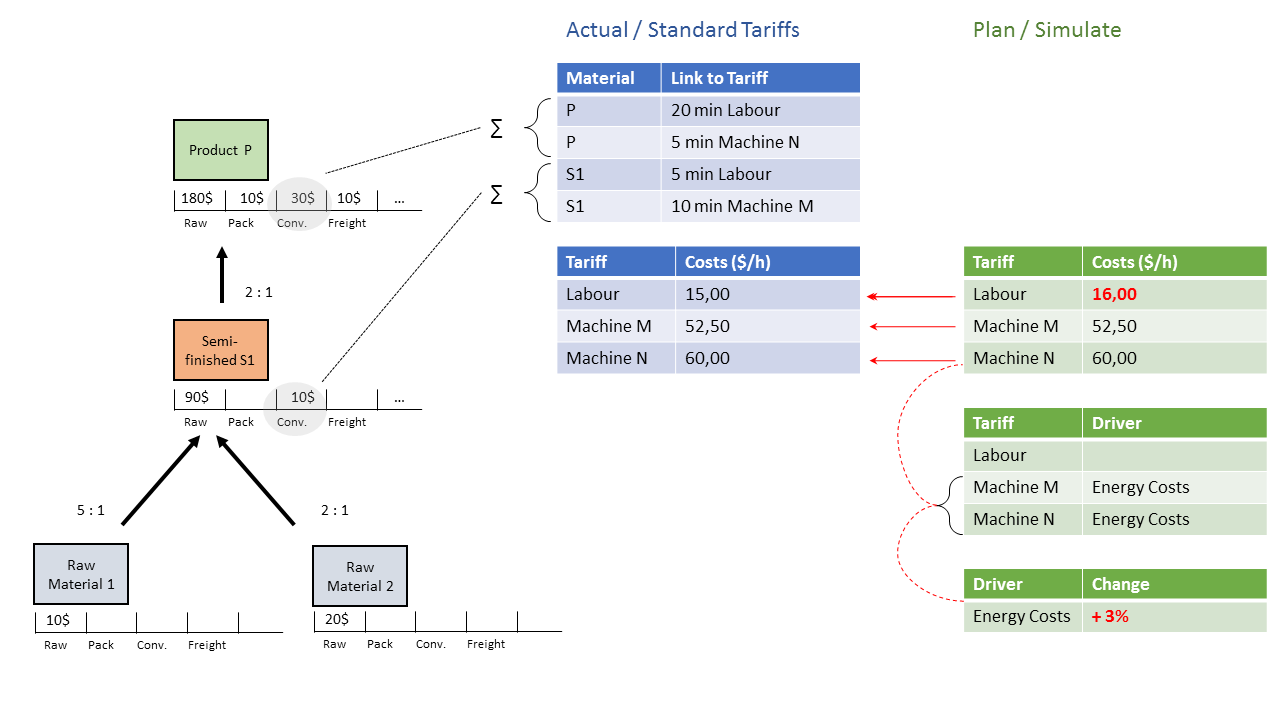 Diagram 4: Overview of changes and enhancements

Implementation of the Concept

This chapter provides detailed information about the 5 enhancements.

Be reminded that all data models and SQL snippets are shown to explain the concept in detail. They should not be used without verification and possibly adaptations in your landscape.

The key and data fields are listed (as screen shots). Wherever possible, standard InfoObjects are used, but in certain cases new fields are introduced. It is recommended to stick to standard fields in the same way. If this is not appropriate, please make sure you also adapt any subsequent object and SQL business logic.

Create an InfoProvider to hold the links between tariffs and the individual materials. In the prototype, the InfoProvider is called ZCFS_T_M (“Tariff to Material Link”).

Use the following fields as shown in Diagram 5: 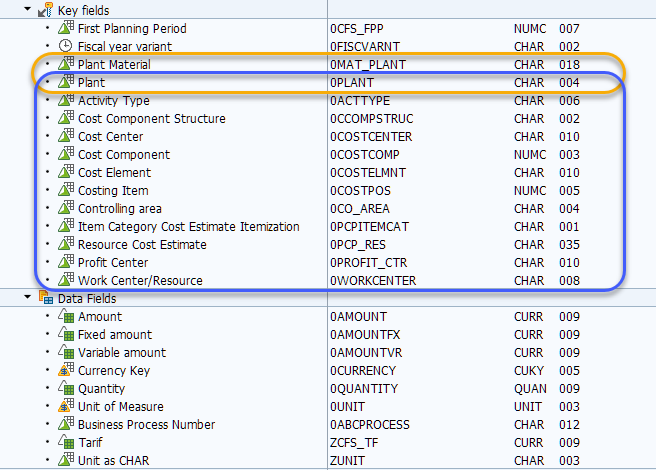 In the prototype, we introduced the key figure ZCFS_TF in which the calculated tariffs are stored. The key figure is of data type “CURR” and has “0CURRENCY” as Currency.

The tariff has to be calculated based on 0AMOUNT and 0QUANTITY:

The data flow for this InfoProvider is based on the InfoSource /IMO/CFS_IS30 (Product Costing Analysis: Itemization (0CO_PC_PCP_30)).

The transformation rules can be found in Diagram 6: 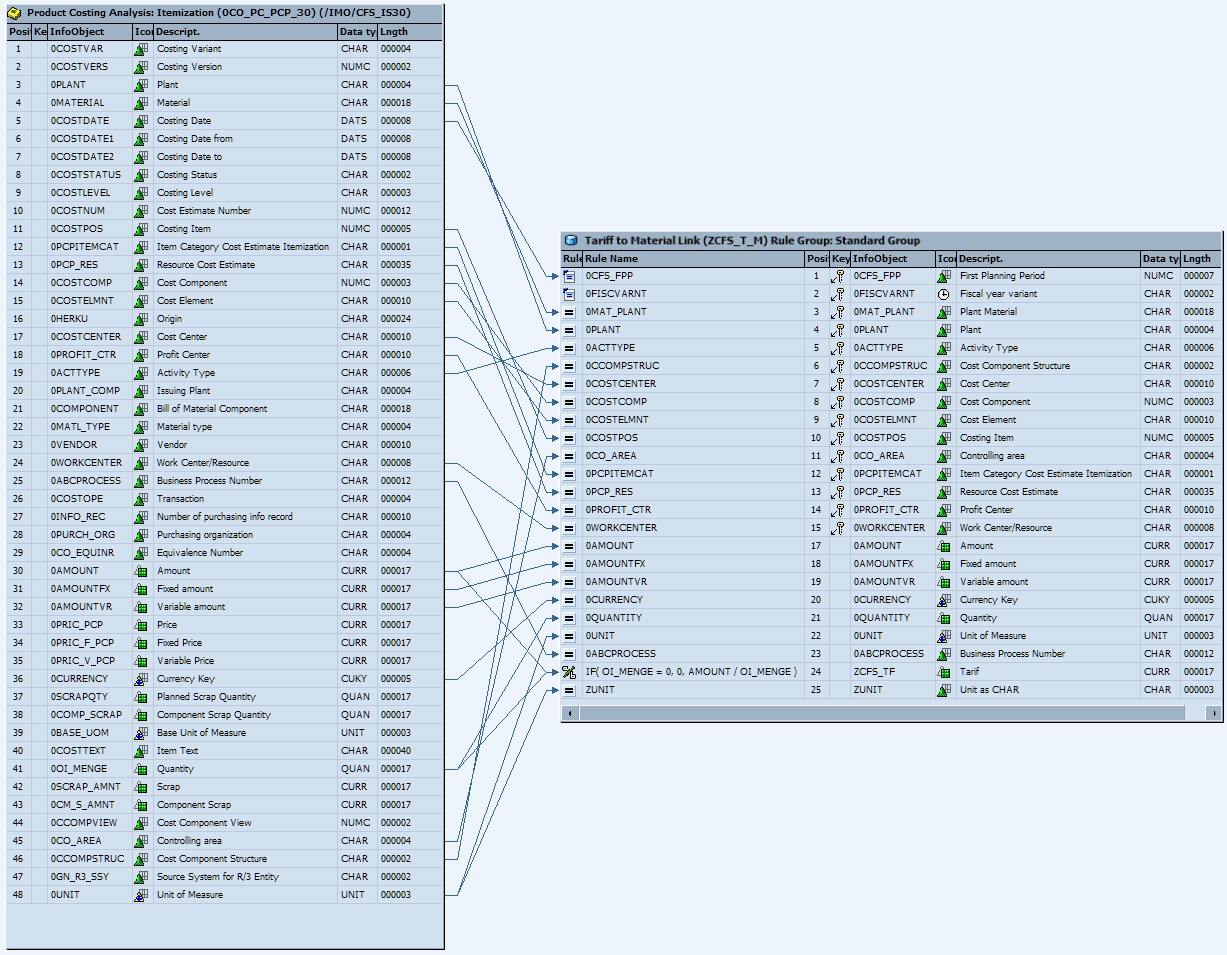 All fields are directly assigned from the InfoSource to the InfoProvider except for:

The Filter for the data transfer process has to be set as follows: select “2” for Stufe and exclude the Item Categories “I”, “L” and “M”.

Store “standard” or “actual” tariffs as basis for planning

Create an InfoProvider to hold the standard or actual tariffs. In the prototype, the InfoProvider is called ZCFS_T_L (“Standard Tariffs”).

Use the following fields as shown in Diagram 7: 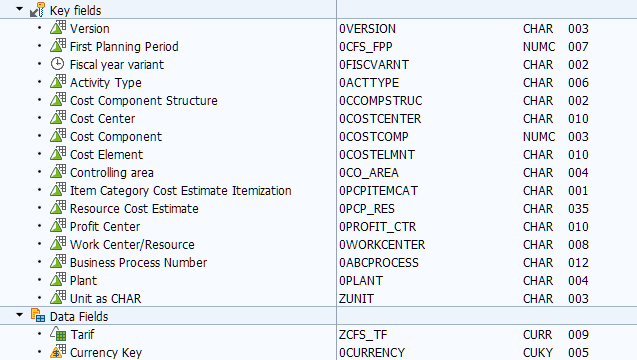 The “Standard Tariffs” InfoProvider is filled from the “Tariff to Material Link” InfoProvider (see above). The transformation rules can be found in Diagram 8:

All fields can just be moved from the source to the target. The routine for the field 0VERSION can be taken over from the standard content: Please check the transformation rule into DSO /IMO/CFS_D031. Make sure, that the Tariffs will not be summarized: Check that the aggregation rule for field ZCFS_TF is set to overwrite.

Create an InfoProvider to hold the plan tariffs. In our prototype, the InfoProvider is called ZCFS_T_P (“Plan Tariffs”).

Add the field 0FISCPER as Key field. The complete field list is shown in Diagram 9: Based on the MultiProvider / Composite Provider, create an Aggregation Level that contains all the fields. Create a suitable Filter and create a Planning Function of type copy to fill the InfoProvider “Plan Tariffs” as follows: 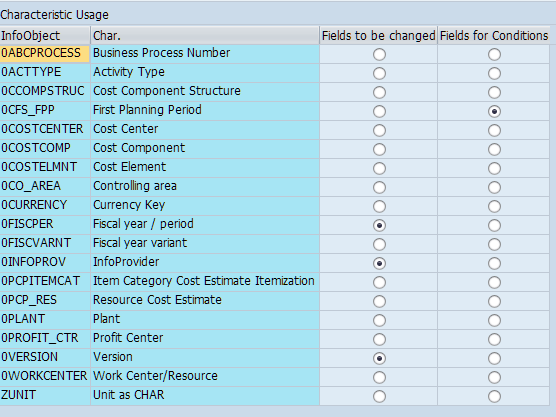 Set the following fields to be changed: 0FISCPER, 0INFOPROVIDER and 0VERSION.

The following example has been taken from the prototype: 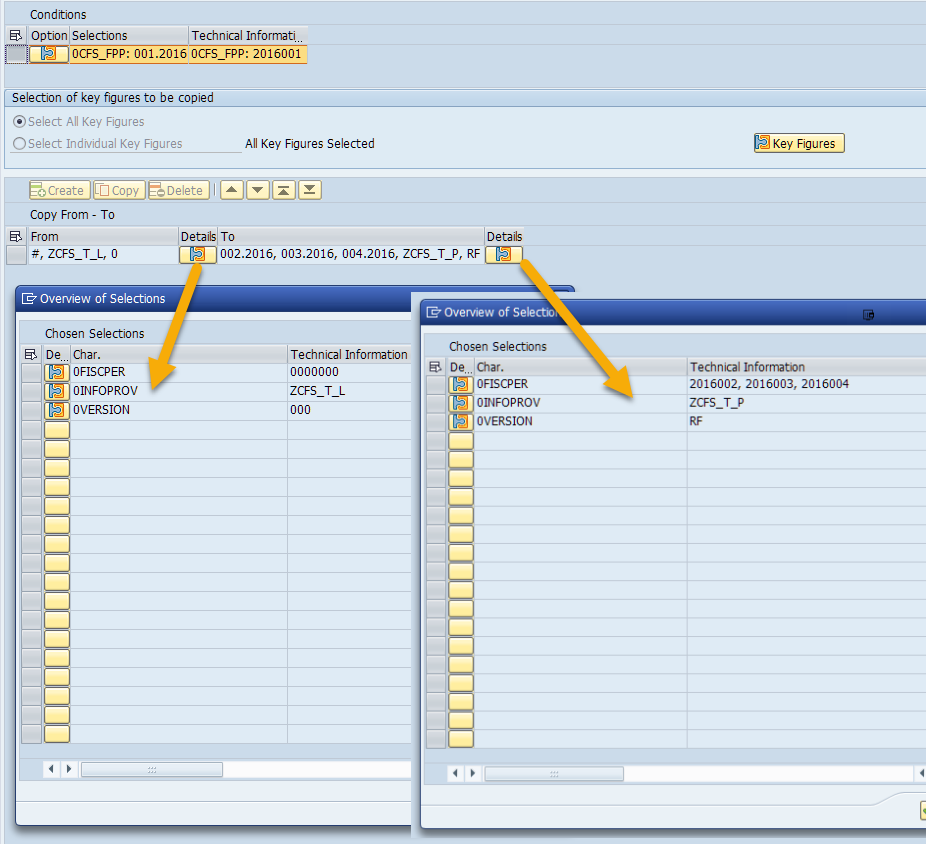 The cost drivers are planned based on DSO /IMO/CFS_D01 “Cost Drivers”.

The correlation of tariffs to a driver works analogously to the correlation of material groups (called “Material-Driver-Segments”, 0CFS_SEGMNT). For details, check the standard content DSO IMO/CFS_D02 “Correlation Cost Drivers”.

Based on the new InfoProviders created, the business logic needs to be adapted as follows:

Calculate changes based on tariffs

First, a new SQL procedure has to be created (or the new logic has to be implemented in the existing procedures). The following code snippets illustrate the logic. They need to be adjusted to fit to your system and setup and must not be used productively.

Remark: The code snippets do not use CE-functions, even though the standard content does.

In the first step, the materials and their tariffs are read in. As common in Product Cost Forecast and Simulation, in this step the tariffs are copied over (“expanded”) to all fiscal periods defined by the planning horizon.

Now, the drivers and the correlations are read in:

The second join determines the correlation between drivers and their future percentage changes on the one hand and the tariffs on the other hand.

As with the standard content (DSO /IMO/CFS_D21), it is possible to manually plan tariffs. In case manually planned values exist that are different to the baseline, these values are used.

Finally, the results are aggregated to material / cost component level:

The last step is to incorporate the tariffs extension into the existing logic.

This works similar to the concept of overwrite: The additional values are read in, in this case by calling the new tariffs procedure explained in the previous step. In the final calculation of the new material costs per cost component, the new tariff-based values substitute the original costs. This avoids double counting.

There is a priority in the calculations: First the material prices are calculated – no change yet to the standard content. As described above, the standard content allows to also change conversion costs. It is not recommended to use this option parallel to the enhancements described in this concept, but if one does, the new logic “wins” and overwrites the already changed conversion costs. The highest priority comes from the overwrites. Direct entry of a future cost component always has the highest priority. This could be changed if necessary.

The only procedure that needs to be adapted is SP_MTPR1.

Call the newly created procedure. It is recommended to add the call after the logic that reads in the overwrite prices from DSO /IMO/CFS_D21:

Further down, join the tariffs as follows: It is recommended to add this join after the join of the “overwrites”:

First, the join to read from has to be changed – in our example join10 is used instead of join9. The tariffs can be added as indicated below:

There is no need to change the output structure and consequently, all other logic can remain unchanged.

Excellent stuff Rolf - thank you for such a clear explanation.
We are looking forward to implementing this approach with a customer, and to updating this thread with any feedback.

One question. Considering PCFS is part of BI Content, what approach would you advise in implementing these modifications?
Would you advocate following the 'usual' approach of creating these under a new custom package and assigning to a delivery unit for transport?

any feedback is welcome for sure!

Yes, I would recommend standard processes for the development - just treat this like any other customer enhancement.

Excellent work. Thanks for the sharing the such valuable information.

Really glad to see some real-life implementation blog that goes way beyond the too common "here are five SQL to monitor HANA" type of posts! Thanks for writing this up.

One question I have is: why are the CE_-functions used here? Mixing them with SQL limits the options for the optimizer to rewrite and reorder statement execution, so there surely is a huge benefit in this harder to maintain approach. But what is it?

thank you for your kind words.

Why did I mix CE functions with plain SQL? Well, historical reasons for this mostly: When we created the Product Cost Forecast and Simulation content some years ago, the CE functions were recommended, not least for performance reasons. So, the standard content still has the CE functions and this is why they still appear in the code snippets.

By now, SAP HANA has evolved: If I had to create content now, I would no longer use the CE functions. This is why my enhancements have been written in plain SQL to indicate this change in recommendation.

Thanks for the swift answer and clarification. It's exactly what I expected.

Again, I'm really happy about this well-written and extensive post showing actual development results. Really, I wouldn't mind if you would post some more of this (or motivate colleagues to do it).