Proving Myself Wrong with the Product I Work On: SAP Leonardo IoT Bridge

Seventeen years ago, I wrote my thesis at the University of Mannheim titled “Support of Management Information Processes through Modern Information Technology – Potentials of Integrative Concepts using the Example of the DaimlerChrysler Group.” One of my key findings back then was that “… the existing concepts lack a focus on business processes and end users. This is especially true for the approach of SAP.”

I certainly did not expect to one day be part of a team at SAP that would work on the next generation of enterprise software that leverages the Internet of Things to put data into business context to – simply put – help people get their jobs done: SAP Leonardo IoT Bridge.

Back then, the term “Internet of Things” had only been coined one year earlier by Kevin Ashton, executive director of the Auto-ID Center; the launch of the first iPhone was still 7 years out and although GPSs have been around for a while, it was only in 2000 when the government started allowing civilian use of the military’s advanced GPS signal, a key ingredient to so many IoT solutions we take for granted today. Companies were focused on trying to wrap their heads around how to best take advantage of the technological innovation at hand, that the needs of the end user and the relevant business context sometimes got neglected. Apparently, this was on my mind at the time and reflected in the conclusion of my thesis.

Since then, technology in many areas has become a commodity and enterprise software companies, big or small, have made great progress in putting the end user center stage again. With IT no longer being a bottle neck but an enabler of innovation, there is time to focus holistically on the needs of the end user.

Let’s take a closer look at SAP Leonardo IoT Bridge which was launched in August of this year and drew quite a crowd at the recent SAP TechEd in Las Vegas: 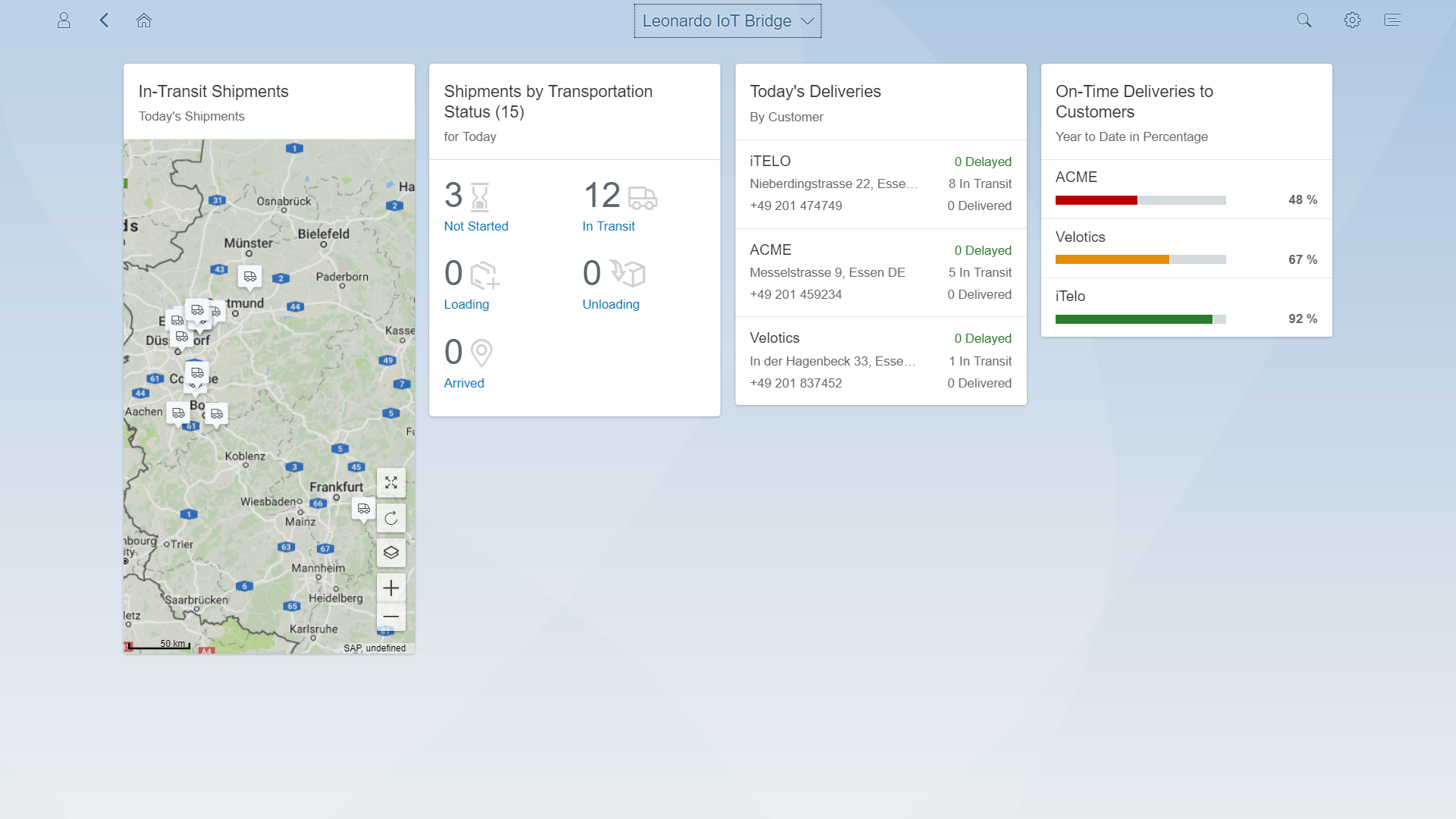 SAP Leonardo IoT Bridge helps the end user reveal where operational risk and business opportunity lie across the business network by bringing IoT data into a business context. Let’s for example assume you are the logistics manager for a global distribution company. You are a shipper of goods and are concerned with several KPIs, including delivery accuracy in relation to time and quality. The SAP Leonardo IoT Bridge overview page provides you with so called “Bridge Cards” which include data mashups and contextual business information sourced from multiple systems including applications such as SAP Global Track & Trace, ERP, Integrated Business Planning, Connected Goods, and Vehicle Insights. So, you do not only see which deliveries for which customers are loaded on what handling unit (think pallet) and on which truck, but you can also track the location of the truck and monitor conditions from sensors attached to the handling unit (e.g. temperature, vibration, humidity, etc.).

Moreover, you can drill down into individual shipments or deliveries to get further insights. In a single application screen, SAP Leonardo IoT Bridge mashes up data from multiple sources, such as Vehicle Insights, Global Track & Trace and ERP, to bring you contextual information with added intelligence. In our example of an outbound logistic scenario, you are given the delivery ID as well as relevant information associated with this specific delivery, such as: status, dates, event timelines, estimated arrival time, and a map showing the current location of the vehicle in relation to its destination. You are also able to see specifics about the materials included in the delivery and the quantities involved.

This allows for a real-time holistic view across the entire value chain for Outbound Logistics. 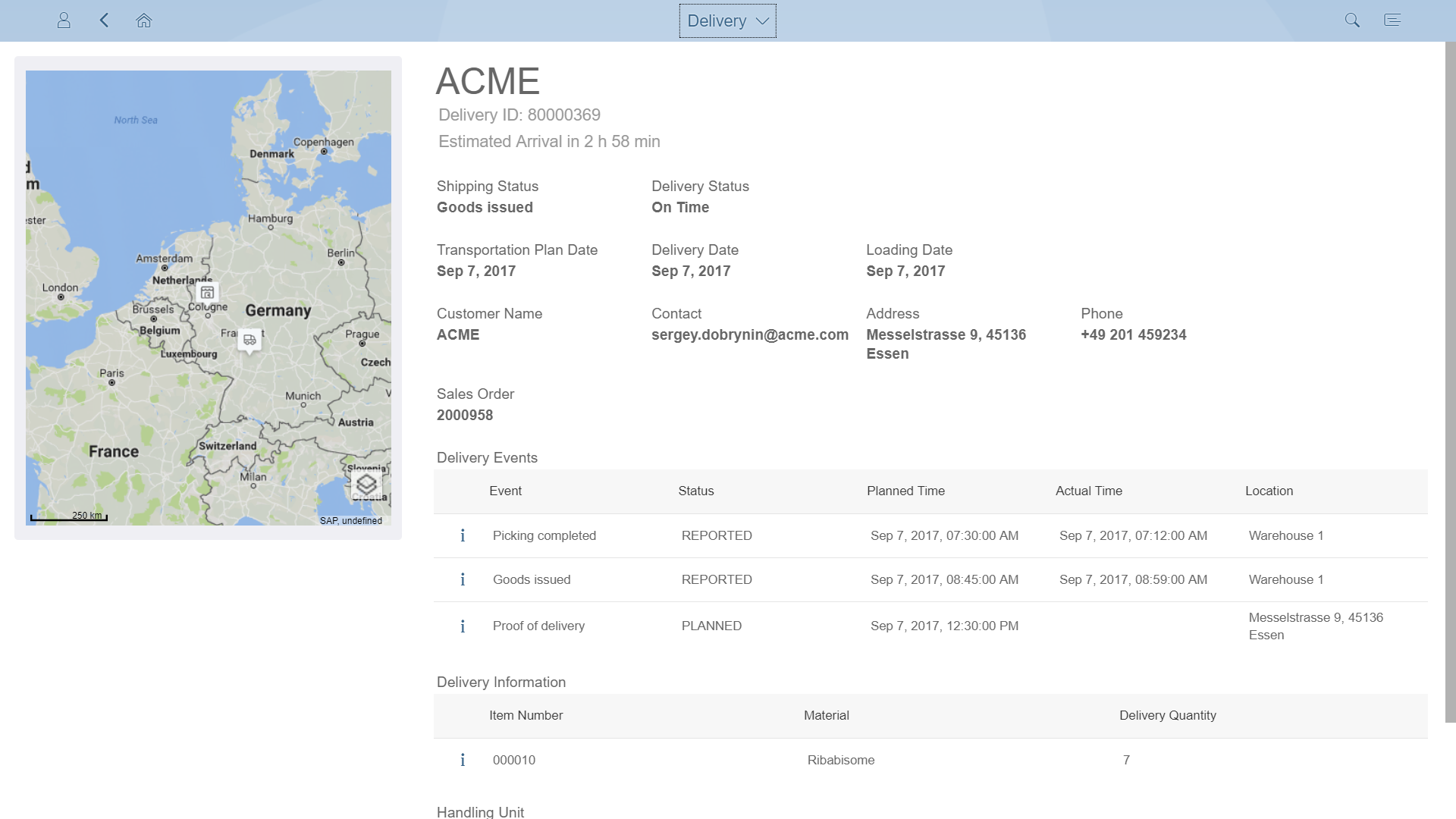 Risk and opportunity can be a moving target; thus, SAP Leonardo IoT Bridge works to proactively distinguish deviations and abnormal situations and is constantly assessing operational and business impact. Let’s assume in this example that an alert is displayed, explaining that a temperature threshold has been exceeded for a pallet carrying sensitive materials which must be transported in a regulated environment. 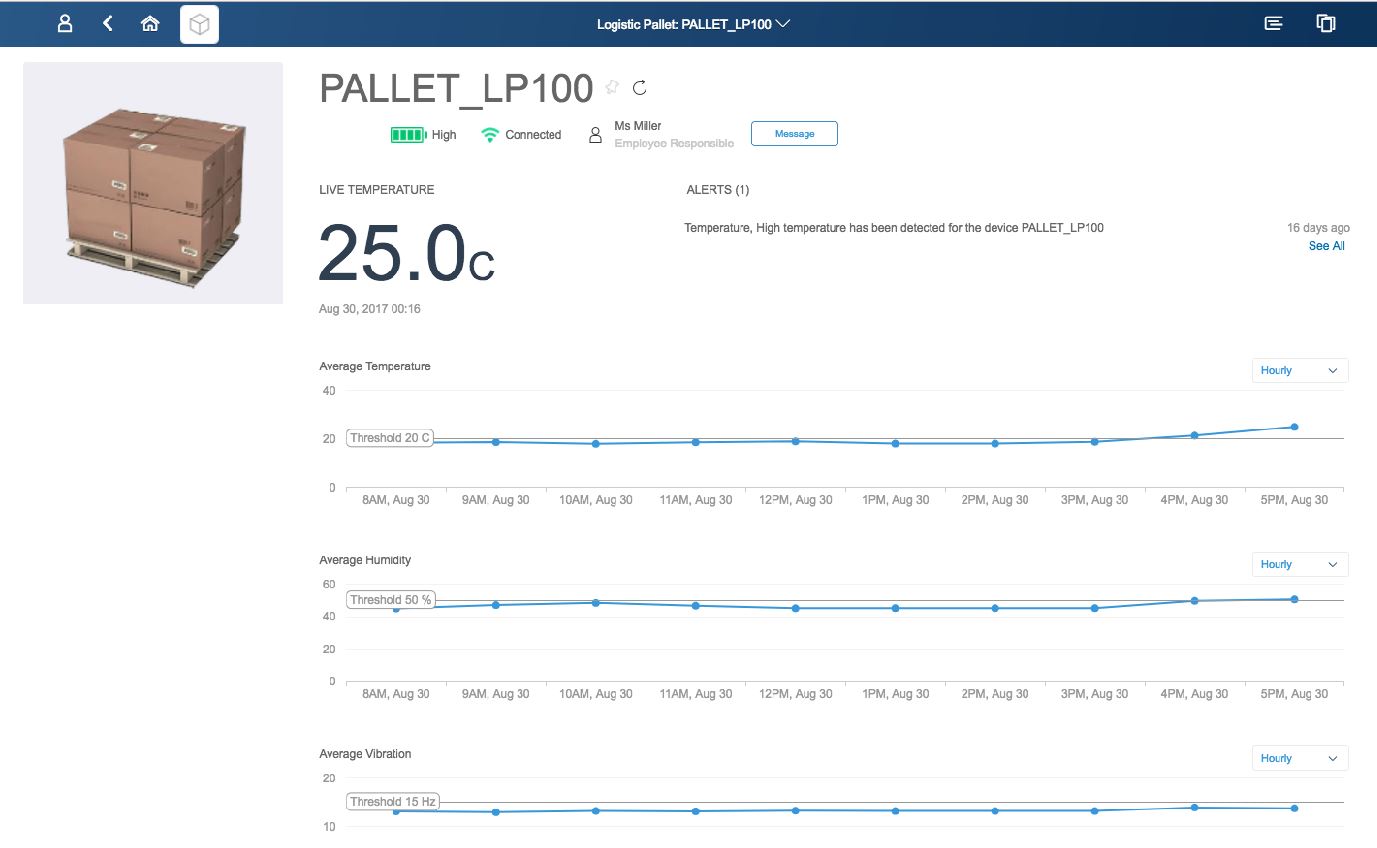 SAP Leonardo IoT Bridge supports the end user with informed decision making and actionable guidance. In our example, the end user is provided with additional context on the exceeded threshold and given guidance for how to resolve the unexpected situation. One option might be to return and replace the affected delivery. Obviously, this option is only meaningful, if the item in question is available at one of your warehouses. SAP Leonardo IoT Bridge supports you in getting all the information you need to make this decision by pulling all relevant information from the ERP system (e.g. perform an ATP check to see if the item is in stock).

It also allows you to collaborate with your customers and other stakeholders – for example your freight forwarder – to alert them of the change. Finally, SAP Leonardo IoT Bridge supports you in creating the new delivery directly in the back-end system. I might have to start thinking about writing a sequel to my theses. It had a good shelf life, but I’m happy to report a major reason that it’s dated material now.