Fun down to the final submissions, official voting closed as of October 27, 2017 6:15 AM PST / 9:15 AM EST / 6:45 PM IST. The official results show Steve Rumsby as our caption contest winner, having submitted both of the top entries (impressive!) and ANKIT CHAUHAN coming in a close third. 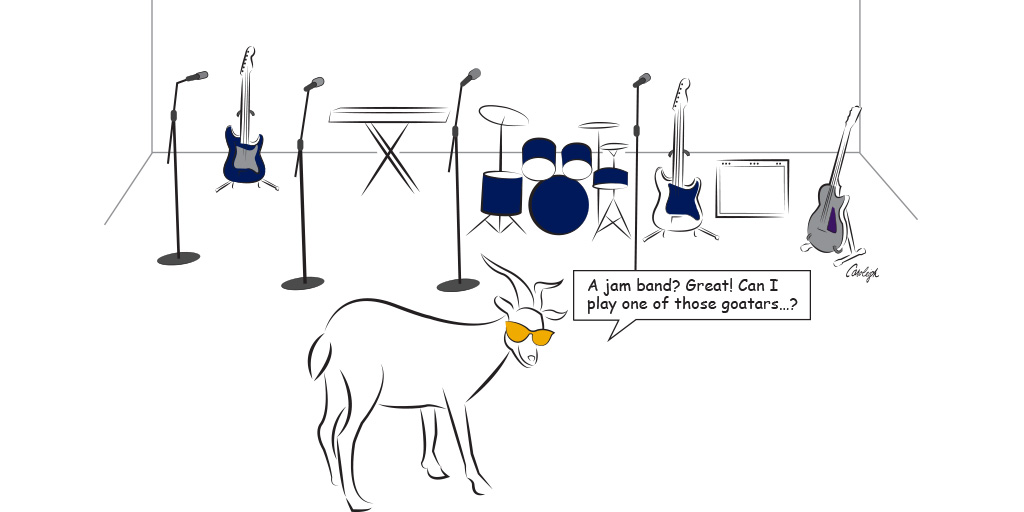 Steve Rumsby: “A jam band? Great! Can I play one of those goatars…?”

Steve Rumsby: “I brought my own horn, can I join in?”

ANKIT CHAUHAN : “No Goats No Glory”

Warm congratulations to Steve and many thanks to all who shared their creativity and good humor with the community.

Have you heard… Capra was such a big hit in Las Vegas she got invited to SAP TechEd Bangalore! (If you don’t know Capra yet, she’s our new community mascot and her TechEd adventures are being shared on social media by our community goat herders #goatspotting, @community_goat.)

For those of us who can’t join Capra in Bangalore, we’ve got another TechEd caption contest to help bring the event’s excitement to the community. The laugh-out-loud submissions rolled in during the Las Vegas caption contest and for this Bangalore take, I found my inspiration in the SAP Jam Band. It turns out this is the first year the Jam Band will be performing in Bangalore and I can’t help but wonder if Capra will make an appearance.

What do you think, does Capra have talent? Share your caption to make this cartoon rock! 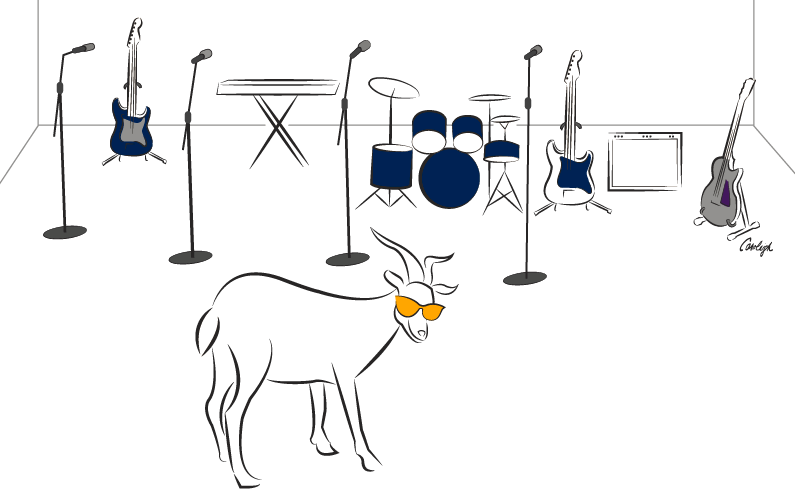 Caption entries and voting will close on Friday October 27th after the last Bangalore education session at 6:15 AM PST / 9:15 AM EST / 6:45 PM IST. That’s only 3 days so get your entries in soon!

There are no prizes, but you will earn the respect of the community, the admiration of Capra, and your caption will be added to the cartoon and shared with the community for all to see. And this time, the cartoon and winning caption will be featured at the Barcelona community booth, prominently displayed on the back side of the selfie wall. I will also send a printed hard copy with the caption to the winner.

This contest is brought to you with special thanks to Timo Elliott, who brought us the first community caption contest in 2015 with much success and to my Community Experience Team colleagues who collaborated on Capra-worthy concepts.

WOW!!! Can’t believe that I am in India. Playing ROCK and not CLASSICAL!!!

Let's start dancing... Ohhh... But wait who is going to play all this instruments!!! Excuse me... Does anyone know how to play them?

I forgot to bring my dancing costume. Is it okay with sunglass?

I brought my own horn, can I join in?

A jam band? Great! Can I play one of those goatars...?

Take a bad system and make it better

remember to let her in your memory

then you'll begin to make it

you come and go

you come and go

Since Sue's not here, I'll be the one in sunglasses.

I wear my sunglasses at night so I can keep track of the visions of TechEd in my eyes.

I am just a cool Goat waiting for the Baaaaaaaaand to show up!

As the opening act, having just successfully completed a back-flip, Capra stood there with a smile of satisfaction as the audience cheered on.

Who am I? Kid Rock, of course!

“Not guilty! Goats will eat anything, but not even I could eat an entire band!”

"It's time to get started -- the party animal is here!"

Although I am much more famous for wielding a cricket bat, I will borrow Sam Yen's guitar and channel my inner George Thorogood, kicking off this TechEd Jam session with a four legged rendition of 'Baaaaad to the Bone'.

Let's hear it for Capra and his Adaptation of the Song "The Lonely Goatherd" ...

Next up, Capra and the Mentors!

Do NOT ask Capra if she knows any Rolling Stones ...

Don't underestimate the Power of Capra in SAP!

"Goat to play? I'm shy! Cannot you see hiding behind the sunglasses?"

Show me what you goat 😀

Goat of the Herd and the Nerd, Let's Jam

Since no bass guitar was provided Capra graciously offered to "play" after returning with a full belly from the food court.

I'm too sexy for my shades!

Horns much better than gongs to get rid of the bad performances!

Hysterical! Can't believe (goat editions) are a real thing and I've missing out until now. Here is another that made me laugh: https://www.youtube.com/watch?v=varlFj0W6UA

Thanks for sharing, and thanks for all who have submitted captions so far.

You've kept me in good humor all day!

Miss this and be the Scap(Goat) ! Literally !!

Goatee and the Shady Band playing The Sound of Silence.

I got a FEVER! And the only prescription is MORE GOATBELL!

Goatbell! Yes! I love that skit.

unquestionable the goat is professional!